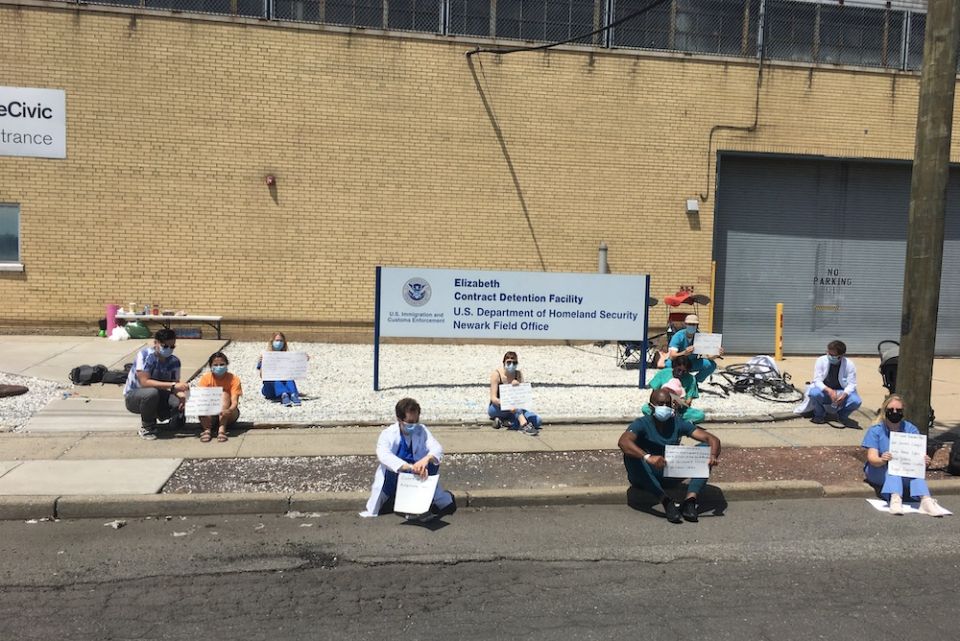 Medical professionals take part in a vigil May 19 outside the Elizabeth Detention Center operated by CoreCivic in Elizabeth, New Jersey. (Courtesy of Doctors for Camp Closure/Marie DeLuca)

Catholic immigration activists, community members and faith leaders in New Jersey held an overnight vigil in front of Elizabeth Detention Center on May 19 to stop the deportation of Hector García Mendoza, a detainee.

The move to deport García Mendoza came after he and three other plaintiffs sued the privately-run detention center in Elizabeth on May 15, demanding the immediate release of those held in the facility.

The lawsuit was filed by attorneys from the Immigration Defense Project, American Friends Service Committee and the Immigrant Rights Clinic at NYU.

The class action lawsuit alleged that Immigration and Customs Enforcement (ICE) and CoreCivic, the publicly traded company running the for-profit detention center, violated the rights of the immigrants, as all inmates were at high risk of contacting the coronavirus.

Earlier this month, an officer died of the virus, according to a release by CoreCivic, and 18 detainees at that facility have tested positive for COVID-19 overall, as tallied on the ICE website.

The guard who passed worked there more than 10 years. He was actively working at Elizabeth and had recently been hospitalized with the virus.

Tweet on May 14, 2020, from Emily Kassie, journalist with The Marshall Project

Activists were mobilized into action when García Mendoza's legal team was informed of his impending deportation. According to his attorneys, he was taken to Newark International Airport and flown to Laredo, Texas. From there, he was made to cross into Mexico. García Mendoza's whereabouts still remain unknown.

The vigil began at 5.30 p.m. May 19 and continued till noon May 20, all the while maintaining social distancing. "We were asking people to come every three hours, maintaining at least 20 people at all times. There were some who stayed longer," Kathy O'Leary, from Pax Christi New Jersey, told NCR in a phone interview.

"This is somebody who came here to work. That's all he did — work and go to church. It's a sad story," said O'Leary.

García Mendoza, an undocumented immigrant, had been living the U.S. since 2010 and was working in the construction and landscaping industry.

He was a member of St. Rose of Lima Parish in Freehold, New Jersey. García Mendoza was taken into detention on March 13, 2020, on charges of immigration violations.

Dr. Marie DeLuca, a member of Doctors for Camp Closure and an emergency medicine professional, came from New York City to participate in the vigil.

"People in detention are extremely vulnerable to COVID-19. There's no way to socially distance, no access to soap and supplies to keep themselves clean. We've also seen deaths in detention. The best thing to do right now is release detainees," DeLuca told NCR.

Doctors for Camp Closure is a group of 2,500 medical professionals from across the U.S. who oppose the inhumane detention of migrants and refugees in the country.

DeLuca said that although Elizabeth has reported 18 cases of COVOD-19 in its facility, the actual numbers could be much higher.

In the lawsuit, García Mendoza said he suffered from asthma and experienced chest pain and shortness of breath while in detention. The medical staff allegedly refused to give him "adequate treatment," said the lawsuit.

García Mendoza was worried about being infected, as he was housed in a crowded dorm containing 40 beds and a common bathroom, which allegedly ran out of soap often. According to the lawsuit, men he was previously detained with tested positive of COVID-19.

At a Zoom press conference on May 20, Alina Das, co-director of the Immigrant Rights Clinic for New York University School of Law, said that a local judge issued a stay on removal that afternoon, but ICE still went ahead and deported him. "It's clear that they acted in an expeditious manner, and we believe in retaliation for the fact that Mr. García Mendoza was a named class plaintiff," she said. 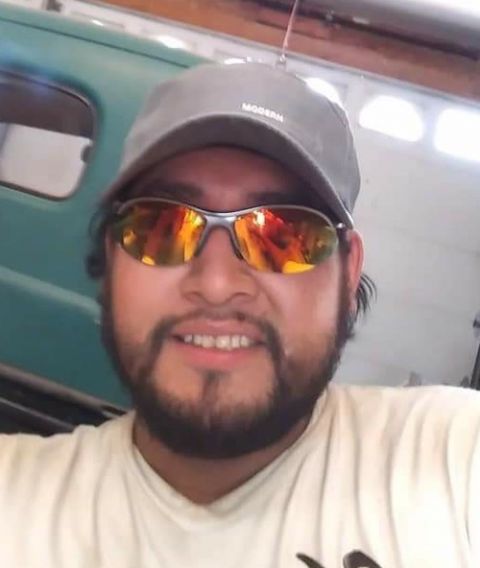 His attorneys are seeking flight details from ICE and trying to locate him.

Rita Dentino, director of Casa Freehold, is advocating for García Mendoza and trying to determine his whereabouts. Dentino has been in touch with his family and friends.

"Hector's family had heard nothing from him since he was thrown in a dangerous part of Mexico where both COVID-19 and violence is rampant. His mother is crying in Oaxaca, waiting to hear that her son is fine," she said.

"The first thing we want to know — if he is alive and well. We then want to get him back. He was the easiest target to take and throw him across the border, in a way that goes against anything legal in the country," said Dentino.

The vigil was broken up by local police Wednesday around noon, and activists were threatened with arrest. "We pushed as far as we could, writing messages on the street. They put their foot down and we left," said O'Leary.

Activists say they are currently working to protect the other three named plaintiffs from deportation.

Catholic groups: Obama's immigration order a good start, but much remains to be done