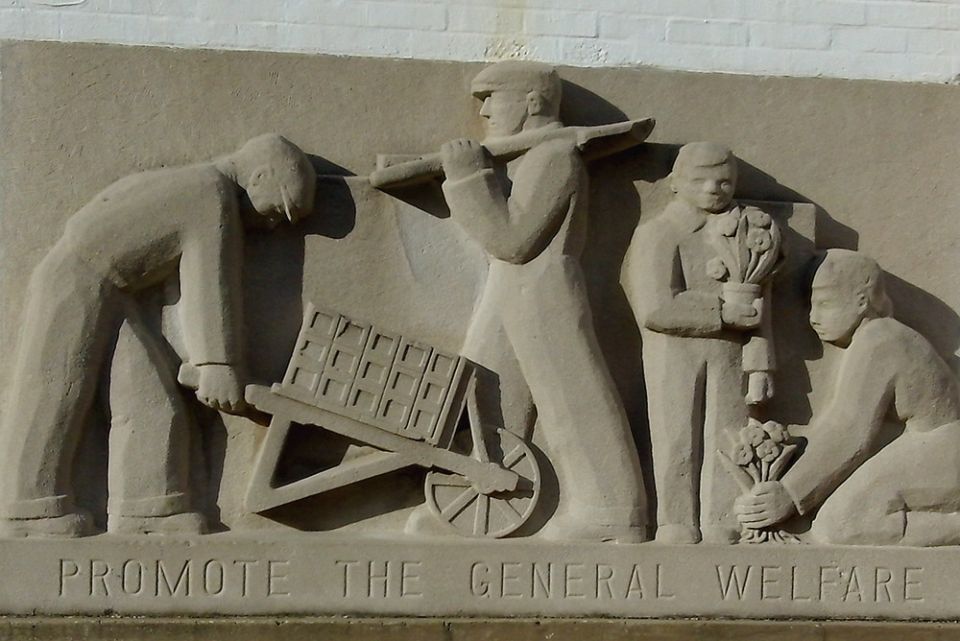 The sixth frieze of "Preamble to the Constitution" by Lenore Thomas (1937) at the Greenbelt Community Center in Greenbelt, Maryland (Wikimedia Commons/ArtistsInResidence)

Last September, I wrote about a woman I'd seen but did not know who said a lot to me about the world I was living in. It was a world I had never expected to see in the United States of America.

Dressed in a matching, middle-class sort of way — knitted mauve skirt and blouse, nicely coifed, nothing flamboyant or gaudy or swashbuckling about her, clearly neither depressed nor destitute — but waving her arms and screaming out loud. It was a picture of an America I had not seen before.

Looking back now, I guess you could say that the demonstration was meant to be a dash of patriotism at its best.

The problem is that though this particular protest was meant to "protect the Constitution" that has for a long period now been hanging by a thread, the protest was actually contradicting a large part of the Constitution's preamble and its commitment to "the general welfare" of the country.

She was shouting her "freedom" to ignore the rights of anyone — of everyone — else in the country by refusing to wear a mask in the midst of one of the most transmissible pandemics in 100 years. It's not, in other words, the historical practice of this country to mask the population as a show of political whim and fancy.

And politicians, even governors, agreed with her, apparently. So, many lost their rights to life while others crowed their freedom to do whatever they pleased in the name of "Americanism."

In all fairness, however, "freedom" is not an isolated concept. The great philosophers of the late 19th to early 20th century, John Stuart Mill and Rudolf Steiner, for instance, linked the concepts of freedom and liberty.

Neither could stand alone, they argued. Freedom is the capacity to do what I will, but liberty is the right to do what I can — only as long as I do not infringe on the rights of others. There are, they pointed out, ethical and moral codes that limit my right to do as I please.

Or, not to put too fine a point on it, I do not have the right to limit the freedom of others to enjoy "life, liberty and the pursuit of happiness."

But even politicians ignored the obvious to get the votes of those who have no interest in either "the general welfare" or "the rights of others" in this free country "to life, liberty and the pursuit of happiness."

So much for political leadership and its responsibility for the common good.

In fact, look closely at the "limitations on our freedom" that have been operative for years. Does the lady in the mauve skirt have the "right" to pick and choose between the ones she'll keep and the ones she won't? How shall we break the news to her about their binding contribution to the common good? For instance:

But in 2020, with no central leadership from Washington, each state stumbled along without a national program of disease control and with a president who made fun of the only defense we had — masks.

The common good, the general welfare, collapsed in the United States of America. More than 600,000 people have died. Six hundred thousand. So far. 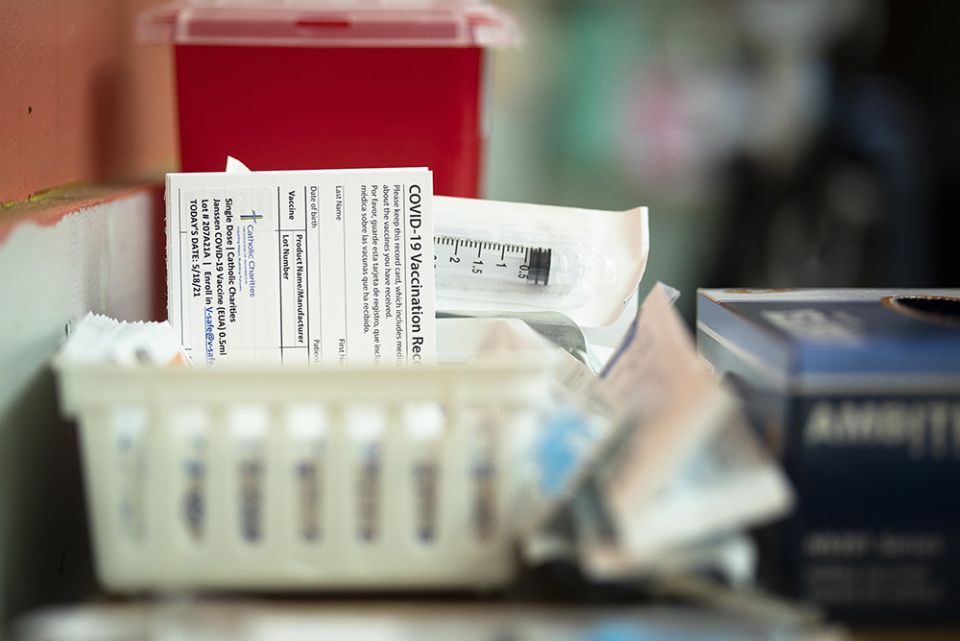 A COVID-19 vaccination card is seen at Catholic Charities in the Brookland neighborhood of Washington, D.C., May 18. (CNS/Tyler Orsburn)

But that leads to what may be the fundamental question: On what grounds beyond the Constitution of the United States of America shall we accept masks and get vaccinated? Answer: On the law above the law — the moral codes the philosophers talk about that guide our care for one another, and that all the great religions teach. They leave no doubt.

Jesus preached relationship and rights so decisively. He left us the Beatitudes and its prescript "Blessed are the merciful." He told us the parable of the good Samaritan who abandoned his convenience for the sake of his neighbor as a real model of spiritual maturity.

Then he left us the most astounding comments of them all: "For if you love those who love you, what recompense will you have?" and "Do to others whatever you would have them do to you." There, "my rights" melt into yours.

Saddest of all, the governor knows, is the story of the patients who lay in Alabama dying — and begging for the vaccine. "I'm sorry," the attending doctor told them, "but it's too late." It's too late. Too late to think about others as so many think only about themselves.

Unfortunately, it seems that there are still more than enough people in that category to affect all our lives.

I can't help but wonder if the woman in mauve is still out there somewhere wildly claiming the "rights" that the Constitution with its commitment to freedom and liberty do not give her.

A version of this story appeared in the Aug 20-Sept 2, 2021 print issue under the headline: Masks, vaccines and rights in the land of freedom and liberty .

A Benedictine Sister of Erie, Pennsylvania, Joan Chittister is a best-selling author and well-known international lecturer on topics of justice, peace, human rights, women's issues and contemporary spirituality in the church and in society.

Column | Masks, vaccines and rights in the land of freedom and liberty