'Birth of a Nation' gives much to discuss 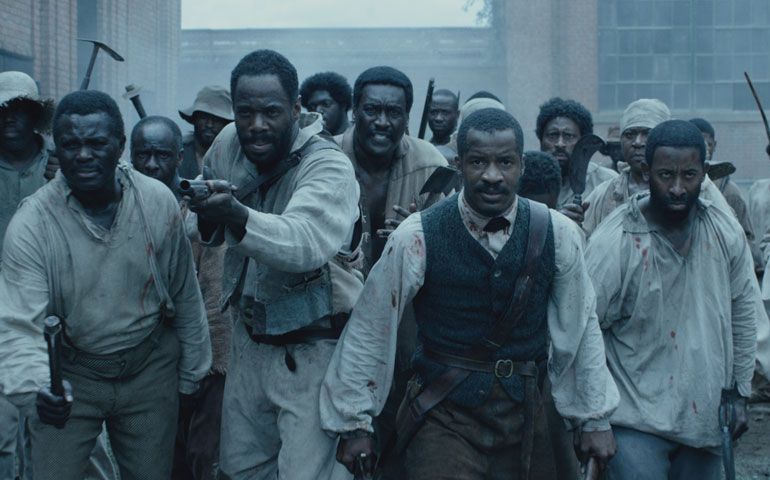 Nate Parker, second from right, as Nat Turner in "The Birth of a Nation" (Photos by Fox Searchlight Pictures)

"Indeed I tremble for my country when I reflect that God is just: that his justice cannot sleep for ever." --Thomas Jefferson

Thomas Jefferson wrote these words in Paris in 1785, in his only full-length book, Notes on the State of Virginia. These same words are on the Jefferson Memorial in Washington, D.C., and they open Nate Parker's first film as a director and writer, "The Birth of a Nation."

This film -- which won an Audience Award at the Sundance Film Festival in January and which Fox Searchlight bought for more money that any other film ever sold at Sundance ($17.5 million) -- is the dramatic story of Nat Turner, a slave who led a rebellion in Southampton County, Va., in 1831. The film is not a remake of the controversial 1915 silent film by D.W. Griffith, but reusing the same title is a powerful reminder of the role the institution of the slave trade and slavery played in the founding of the United States.

The young Nat (Tony Espinosa) is born into slavery in about 1800 and plays with the son of the white family who owns the small plantation. One day Nat spies a book on a chair on the porch of the big house and somehow learns how to sound out words. Elizabeth Turner (Penelope Ann Miller) decides to teach him to read, including the Bible, and moves him into the house.

Nat has to return to work in the fields after the master's death but he takes to the word of God and begins to preach to slaves and slave-owner families in the plantation chapel.

As a young man, Nat (Parker) accompanies his master Samuel Turner (Armie Hammer) to town and they come upon a slave auction. Nat urges Samuel to buy a beautiful young woman, Cherry (Aja Naomi King). Nat and Cherry marry and have a little girl.

But things are not going well in Southampton County; there is drought and always the threat of insurrection and Yankee influence. A neighbor suggests that Samuel let his preacher slave visit other plantations and preach them into compliance as a source of income to relieve debt.

At first Nat complies and preaches submission. But as he sees the suffering of his brothers and sisters, the brutal conditions and starvation, and when his own wife is brutally raped, he ponders more deeply on the word of God. Yes, it tells slaves to obey their masters, even to respect the unjust ones, but the Bible also tells that those who oppress others will be punished.

Nat's sermons become more layered and nuanced and the meaning of Matthew 11:15 ("Let those who have ears to hear, hear") becomes evident to the audience of this beautiful film with its haunting music and seemingly futile call to arms. Slaves hear words of insurrection and deliverance while slave owners hear words that reinforce their comfort and dominance in Nat's impassioned sermons.

Nat hears God speaking to him and sees dark wonders in the sky (two solar eclipses) that he takes as confirmation of his plans. While his grandmother's death gives him courage, his mother, Esther (Gabrielle Union), warns him that the Bible also says that he who lives by the sword will die by the sword.

"The Birth of a Nation" can be read on many levels and is bound to spark conversations and maybe controversy, and I think it should. Any piece of art worth the blood, sweat and tears that went into making it deserves to become the matter of public and private discourse.

Here are five reasons why "The Birth of a Nation" deserves our time and consideration:

The story of Nat Turner in "The Birth of a Nation" is heroic and Parker's performance is very good, as are those of the women, especially Union and King. Some of the other characters are almost cardboard in nature.

Nat is a limited man who uses everything he has to redress the wrongs meted out to him and his brothers and sisters in the only way he knows. God is his consolation and strength. The film is worth seeing and talking about because it took more than 30 more years to free the slaves after Nat Turner's insurrection and we are still dealing with the aftermath of slavery today.

It's good to remember the slaveholder Jefferson's words as we work to walk humbly and live justly: God's justice will not sleep forever.

Culture | 'Birth of a Nation' gives much to discuss