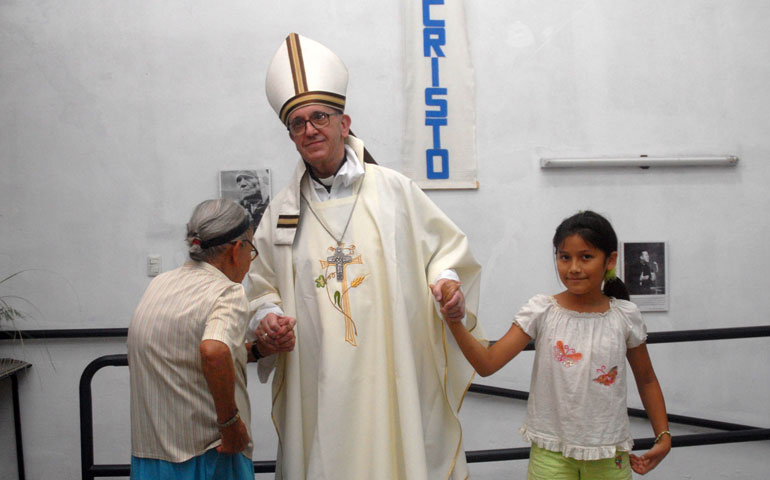 Argentine Cardinal Jorge Mario Bergoglio holds the hands of a woman and girl during Holy Thursday Mass in 2008 at a church in a poor section of Buenos Aires, Argentina. (CNS/Reuters/Enrique Garcia Medina)

Pope Francis does not have an extensive bibliography. To understand his thinking, media outlets  since his election have turned repeatedly to Sobre el Cielo y la Tierra (On Heaven and Earth) -- a 2010 book he co-authored as Cardinal Jorge Mario Bergoglio with Rabbi Abraham Skorka, an Argentine biophysicist and rector of the Latin American Rabbinical Seminary in Buenos Aires.

They discuss in dialogue format a multitude of topics, including atheism, same-sex marriage, the Holocaust and euthanasia.

The book will be available in North America April 30 from Random House imprints: Image Books for the English and Vintage Español for the Spanish.

NCR purchased an electronic copy of the Latin American version of the book and read through it, translating excerpts to share some insights of Bergoglio that readers may not yet have seen in print.

Francis’ now well-known humility comes across as he describes his response when meeting a nonbeliever.

“When I meet with people who are atheists, I share human issues with them, but I don’t bring up the problem of God right away, except in cases when they bring it up with me,” Bergoglio says.

If that happens, however, the future pope says he tells them why he is a believer. Since humanity is something rich enough to be shared, he and the person can calmly and easily discuss experiences in life.

“Because I am a believer, I know these riches are a gift from God,” Bergoglio says. “I also know that the other person, the atheist, does not know that. I do not embark on the relationship to proselytize to an atheist, I respect him and I show him how I am.”

He also states that while knowledge is present, good qualities such as appreciation, affection and friendship emerge.

“I am not reluctant in any way. I would not tell him that his life is condemned because I am convinced that I have no right to pass judgment on the honesty of the person,” Bergoglio says. “Even less so if he shows me human virtues that make people better and are done in goodwill toward me.”

Bergoglio is firm in his insistence that consistency is necessary regarding the Bible’s message: “Every man is an image of God, be he a believer or not. With that reason alone, he has a number of virtues, qualities, riches. And in the case that he has morally low qualities, as I have as well, we can share them with each other to help us overcome them together.”

Skorka agrees, though he adds that he believes an atheist takes a position of arrogance as is also the case of a person who proclaims with certainty that God exists. The ideal position is one of doubt, Skorka says, like that of agnostics or believers who have moments of doubt.

“We religious people are believers, we don’t posit [God’s] existence as fact,” Skorka says. “We can perceive him in a very, very, quite profound experience, but we never see him.”

Skorka goes on to say that one can talk about God’s qualities and attributes, but one can never really give God form or shape in any way. Both men agree that instead of saying what God is, people usually end up describing the many things God is not.

Bergoglio mentions a book titled The Cloud of Unknowing, written by English mystics who attempt, “time and time again, to describe God and always end up signaling what he is not.”

He continues this line of thought by saying that while one may have a spiritual experience and feel certain that God is present, the experience itself is uncontrollable.

“This is why in the experience of God, there is always a question, a space to make the leap of faith,” he concludes.

Skorka and Bergoglio begin the conversation regarding fundamentalists by describing the roles of rabbis and priests. According to Skorka, the rabbi “should lead, carry and try to bring man closer to God.”

Bergoglio explains that the priestly role is threefold: to be “a teacher, a leader of the people of God, and president of the liturgical assembly where prayer and worship take place.”

Bergoglio describes the ideal role of a priest in a person’s search for God and what sometimes happens when a priest can go overboard or be too controlling.

“The priest, in his role as teacher, teaches, proposes the truth revealed and accompanies you. Even if he has to face failure, he is with you,” Bergoglio says. “A teacher who assumes the role of making decisions for the disciple is not a good priest. He is a good dictator, an annihilator of the religious personalities of others.”

A priest dictator “weakens and holds back people in the search for God,” Bergoglio says. A true teacher “will let his disciple go and he will walk with him in his spiritual life.”

Skorka speaks of certain Jewish circles where fundamentalism is rampant, meaning that when the teacher says to do something, the followers don’t have any other choice but to comply. “Things are a certain way and they are not discussed, they cannot be any other way,” Skorka says.

“These leaders hold back the religiousness that should emanate from the most intimate depths of a person; they dictate the lives of others.”

Bergoglio posits that this type of rigid religiosity “disguises itself with doctrines that pretend to give justifications, but really deprive people of freedom and will not allow them to grow.”

“Fundamentalism is not what God wants,” Bergoglio says.

He believes that as a result of this religiosity, people are not prepared to overcome the crises of life, the failings one has, the injustices one commits. “They do not have tools to recognize or understand the mercy of God,” he says.

Bergoglio says, “The moral problem of abortion is pre-religious in nature because the genetic code of the person happens in the moment of conception. A human being is already there. I separate the topic of abortion from any religious concept. It is a scientific problem. To not let the development continue of a being who already has all the genetic code of a human being is not ethical. The right to life is the first of human rights. To abort is to kill someone who cannot defend himself.”

Skorka says that though Judaism allows some room for abortion in certain situations -- such as when the mother’s life is endangered -- “our culture has in large part lost respect for the sanctity of life and that is the problem that needs to be addressed.”

Argentina legalized same-sex marriage in July 2010. Skorka says the issue was handled in a way that did a disservice to the profoundness of the analysis the topic deserves. “There are already many same-sex couples who live together who deserve a legal solution to questions of pension, inheritance, etc., that might fit into a new legal model, but to equate the homosexual couple to a heterosexual couple is something else,” he said.

To serve its people, Bergoglio says, religion has the right to its say over certain topics in private and public life. “What [the religious minister] does not have a right to do is to force the private life of anyone,” he says. “If God, in his creation, ran the risk of making us free, who am I to butt in?”

“We condemn the spiritual harassment that happens when a minister imposes directives, behaviors, requirements in such a way that deprive the other of freedom,” Bergoglio says.

Still, he agrees with Skorka that in natural law and the Bible, marriage is defined as the union of a man and a woman. He describes gay marriage as an “anthropological setback” because it weakens an “ancient institution that was forged according to nature and anthropology.”

He goes on to explain that other concepts like living together before marriage, while not right from a religious perspective, do not carry the stigma they did 50 years ago.

“It is sociological fact that certainly does not have the fullness and greatness of marriage, which is an ancient value that deserves to be defended,” Bergoglio says. “That is why we warn against its devaluation and, before modifying jurisprudence, there must be ample reflection on what all comes into play.”

[Eloísa Pérez-Lozano is an NCR Bertelsen intern. Her email address is eloisapl@ ncronline.org.]