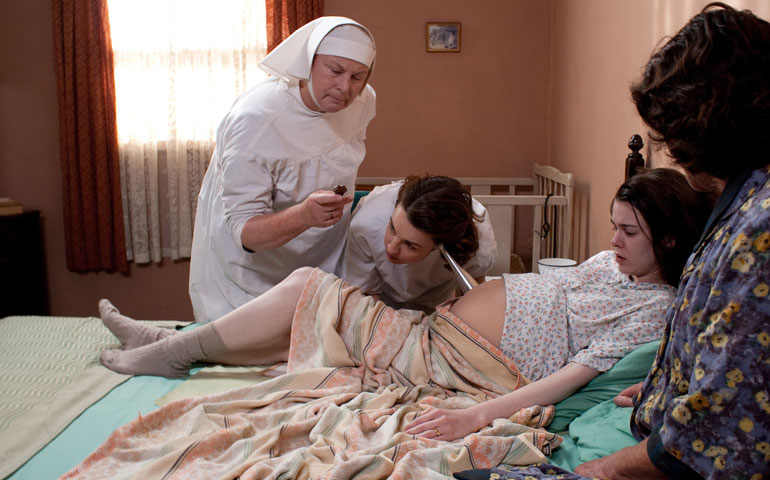 During the 1950s, the Anglican sisters of St. Raymond Nonnatus ran a midwifery service and clinic out of their convent in the Poplar section of London's East End.  Working alongside them were young women who were trained nurses and qualified midwives. "Call the Midwife," a BBC dramatic series, is based on the stirring and candid memoirs of nurse Jennifer Lee Worth (1935-2011). When the first episodes of "Call the Midwife" aired in the United Kingdom, it was the only television series so far to give "Downton Abbey" a run for its money in ratings. The series premiered on PBS in the United States in the fall of 2012.

In the opening episode, Nurse Jenny Lee (Jessica Raine) rides her bicycle through the docks and streets between the tenements to Nonnatus House. Her voice, now older (Vanessa Redgrave), reminisces with warmth and a touch of nostalgia. She admits choosing midwifery because she thought it would be easy. She is young, beautiful, well-trained and naive:

Midwifery is the very stuff of life. Every child is conceived in love or lust, and born in pain followed by joy, or by tragedy and anguish. Every birth is attended by a midwife. She is in the thick of it. She sees it all. I knew nothing of poverty or appalling housing, nothing of lice, of filth, of families sleeping four to a bed. And nothing of the passion that brings on baby after baby, labor after labor. I knew nothing of life itself.

Nurse Lee, three other lay midwives and four sisters, led by the wise Sr. Julienne (Jenny Agutter), live at Nonnatus House when the series opens. Nurse Trixie Franklin (Helen George) seems too pretty to be serious about her job, but she proves herself over and over. Nurse Cynthia Miller (Bryony Hannah) is the upbeat, steady person you always want on your team. Sweet Sr. Bernadette (Laura Main) will call her vocation into question. Sr. Evangelina (Pam Ferris) is rough around the edges but very experienced and a rock in difficult situations. Sr. Monica Joan (Judy Parfitt) is retired and seems to exhibit memory problems -- but her love for poetry and cake and any opportunity to annoy Sr. Evangelina leaves the midwives wondering just how memory-challenged she really is.

The women are joined in their work by Dr. Patrick Turner (Stephen McGann), a widower with a son, who makes house calls and responds to emergencies no matter the hour. Then there is the inventive handyman, Fred Buckle (Cliff Parisi) and Police Constable Peter Noakes (Ben Caplan), who will fall in love with the goodhearted Nurse Camilla "Chummy" Browne (Miranda Hart).

Fifty to 100 babies were born every month in Poplar. Thanks to the National Health Service that began in 1948, the midwives each have a kit strapped to the back of their bicycles. A box of supplies is sent to each expectant mother a couple of weeks before the baby is due. Nurse Lee expects every mother to be compliant but finds out right away that she is no longer working in a sterile hospital where discipline reigns. The flats are mostly filthy with dubious, if any, plumbing, and while many of the husbands and fathers are helpful, some are not.

Nurse Lee meets a loving father of 24 children whose wife only speaks Spanish. She is pregnant with their 25th child. The mother falls and goes into early labor. The London fog makes it impossible for the ambulance to get there on time, so the father calls the midwife. This story opens the series, but it does not appear until later in Worth's published memoirs. It is a true story and made me think of St. Catherine of Siena's mother, who also had 25 children (Catherine was number 23 or 24; her twin died soon after birth), and the Duggar family's "19 Kids and Counting" on TLC.

Another mother has a tumor caused by syphilis that makes her lose the baby. She hardly seems to care for her other three children who don't know how to or won't use a toilet. Nurse Lee stands in judgment as to why the woman never cared enough for her baby to seek medical help. Sr. Julienne gently reminds her that the woman had probably never been cared for in her life. Slowly, Nurse Lee comes to understand, as we do, that the women of Poplar are heroines. Our empathy is completely engaged as we see the consequences of poverty and the cultural mores of the poor, often controlled by men, that place terrible burdens on the women. Yet no one is demonized, not really.

The series wants us to understand what Nurse Lee came to realize: Life is a miracle to be treasured. This does not mean that women do not become desperate and take desperate measures; they do. What this series does is to help us understand realities, horrors and challenges we cannot even imagine. Empathy, compassion and mercy are the order of the day.

Birthing in those years was not as we have it today or as the wealthy had it in clinics in England back then. The show avoids graphic scenes and is careful about camera angles, yet manages to involve us to the point of caring as much as the nuns and midwives do. Music of the era forms the soundtrack of the series. There is humor, and there is faith, hope and love.

Celibate religious life, the romantic lives of single women, and the lives of wives and mothers are contrasted well, yielding a fine blend of the rich humanity of the characters, the holy, and an immensity of heart. Even though Sr. Monica Joan no longer works as a midwife, Sr. Julienne tells Nurse Lee that the nun was from the aristocracy; her family disapproved of her decision to become a nun. Sr. Monica Joan was the first religious to qualify as a midwife in England, and "it is an honor for us to care for her." This well-written and superbly crafted show is about more than babies.

The name of the order, the actual convent, and many names have been fictionalized. Yet every episode is true in the first three seasons, taken from Worth's memoirs. And they are drawn with the poetry of light, sight, sound, laughter, pathos, humanity, love and life.

"I had begun to see," narrated the older Nurse Lee, "what love could do. Love brought life into the world and women to their knees. Love had the power to break hearts and to save. Love was like midwifery, the very stuff of life, and I was learning to fly with it through all the streets, like the river to the sea."

The first three seasons are available on DVD and Netflix. A fourth season is due on PBS in spring 2015, and while no longer based on Jennifer Lee Worth's memoirs, the episodes will be derived from the history of the times.

A version of this story appeared in the Oct 10-23, 2014 print issue under the headline: 'Call the Midwife' is a celebration of life.