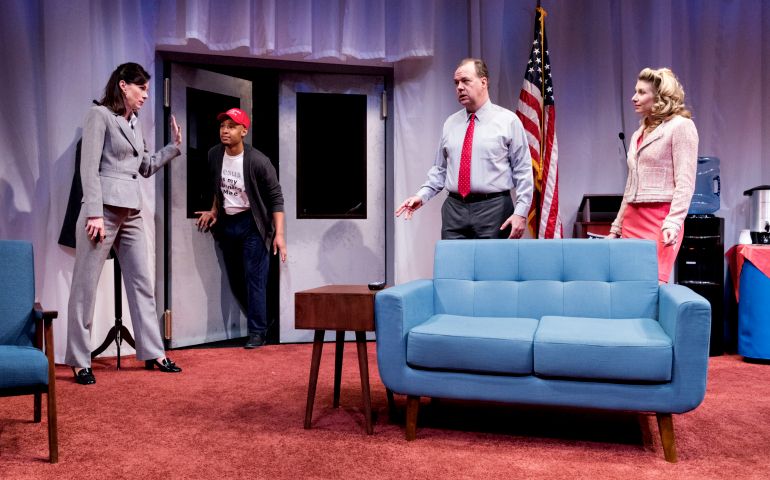 The U.S. senator from North Carolina is portrayed as an unquestioning supporter of all things red, especially in relationship to God and guns. His convictions are challenged, though, after a shooting at his son's elementary school leaves 29 dead. Following the funeral for one of the victims, he admits in response to a blogger's question that the killings are enough to make him doubt God's existence.

He is running for a third term and his comments go viral. Three days before the election.

Jason Odell Williams, 42, was inspired to write his latest play, "Church and State," after the 2012 shootings at Sandy Hook Elementary School in Newtown, Connecticut. But he had been thinking about gun violence since at least 2007, with the mass killings at Virginia Tech in Blacksburg, a football rival of his alma mater, the University of Virginia in Charlottesville.

"I watched the news and saw a candlelight vigil in Charlottesville and it struck a chord with me," he said during a telephone interview from his home on the Upper West Side of Manhattan. "I had been a student there not that long before. It really shook me."

That incident was followed by the shooting outside a Tucson, Arizona, supermarket in which Democratic Rep. Gabrielle Giffords and 16 others were shot, six of them fatally.

The Sandy Hook tragedy prompted him to put his thoughts on paper. His first draft of "Church and State" was "like a well-written Facebook rant with a very one-sided liberal New Yorker view."

He sent it to Ralph Meranto, artistic director of JCC CenterStage in Rochester, New York; Meranto had produced Williams' first play, "Handle With Care." Meranto "asked smart questions" and offered suggestions to make the characters — the senator; his wife, a conservative Christian; and his campaign manager, a liberal Jew from New York — more three-dimensional and to present the issue of gun control more evenhandedly. Meranto also thought it would be fun to have the senator's remarks be tweeted to spread more quickly.

The show had a successful run in Rochester before moving to Los Angeles, where the Huffington Post described it as "powerful, humorous and highly contemporary," and named it one of the Top Ten L.A. Theatre Productions of 2016. It is now at off-Broadway's New World Stages, with tickets on sale through Sept. 3.**

Talkbacks have been a part of the "Church and State" runs. In New York, they have been held after two showings so far in April, one featuring VTV Family Outreach Fund, a nonprofit established by families of victims of the Virginia Tech shooting; and another with Everytown for Gun Safety and an appearance by actress Julianne Moore. A third is scheduled for April 19, featuring New Yorkers Against Gun Violence.

"My goal was to get it to New York and then across the country," Williams said. "I'd love to see it in all the purple states. That's my ultimate goal."

He is in talks with theater producers in North Carolina, rural Virginia, Florida, Washington, D.C., and Alaska about possible productions there.

"I want to stir up some controversy and start conversations," he said.

Williams sees areas for compromises, such as universal background checks. He created an open-ended finish to allow audiences to draw their own conclusions.

"We're so divided now," he said. "Maybe the rubber band will break and we'll all come back to the middle."

Williams is adamant that he does not want his play to be thought of as disrespectful to people of faith or to Southerners, and makes it clear he doesn't see conservative Christians as the enemy in gun control talks. He saves his wrath for one target alone.

"To me, it's the NRA. They're only thinking about profit," he said. "Nothing about their agenda is reasonable. Living without fear is more important than somebody's gun collection."

Although he has had no personal experience with the issue, he thinks that "we're all less than six degrees of separation now from gun violence."

"There's stuff in the newspapers every day," he said.

Just then, Williams, in almost unbelievable timing, was interrupted by a text from Rob Nagle, the actor playing the senator. The text informed Williams about a shooting at a San Bernardino elementary school that had just left two adults and one child dead, with another child injured.

"It's crazy. It just keeps happening," he said. "People are afraid to go to the mall, the movies, church, places that are supposed to be safe."

Williams, who was nominated for an Emmy Award as a writer for National Geographic channel's series "Brain Games," has never worked in politics and says the only thing that could lure him into it is the unlikely event that Nagle would run for office; Williams would like to be his speechwriter.

He also is not a person of faith, although his mother is Catholic and father Protestant. He was baptized but not confirmed. But his first two off-Broadway plays centered on God and faith.

"I don't know where I stand, which is why I keep writing about it," he said, adding that his wife grew up Orthodox Jewish in Israel and turned from her religion when she moved to America. After the birth of their daughter, Imogen*, now 11, they began worshiping at a synagogue and sending her to Hebrew school. He has no plans to convert.

"It's nice to have a sense of community, of coming together," he said. "I'm always examining what it is and what it means."

*This article has been updated to correct the misspelling of a name.

**This article has been updated with the extended ticket sales date.

Can Bloomberg succeed in his fight to address gun violence?