Churches may be in decline, but Gregorian chant beats secular competition 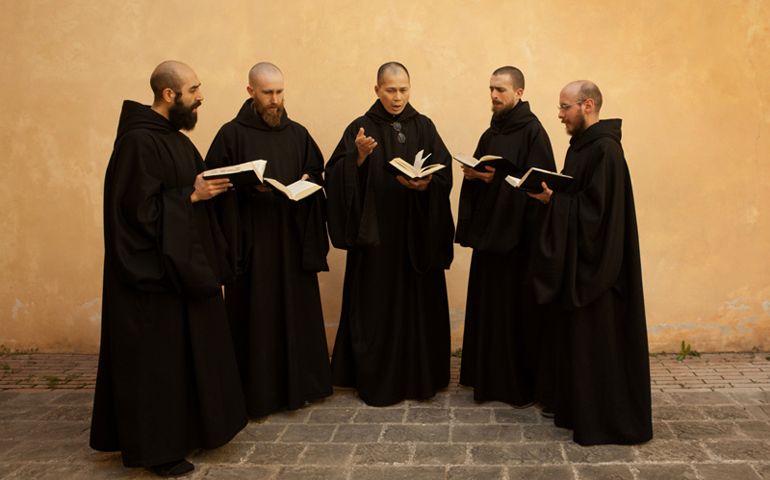 A new Gregorian chant CD by a group of Benedictine monks in Norcia, Italy, debuted at No. 1 on Billboard's classical music chart last week. The album, "Benedicta," was also the top overall seller at Barnes & Noble, was No. 2 on Amazon and made iTunes' Top 40.

This is not the first time monastic chant has seen secular appeal; the biggest seller to date has been a CD called "Chant," which became a pop culture sensation 21 years ago. It featured music recorded in the 1970s and '80s by the Benedictine Monks of Santo Domingo de Silos in Spain, but it didn't attract much attention until rereleased in 1994 by Angel Records.

With its whimsical cover illustration of hooded friars floating among the clouds, and marketing language that touted a "magical calm," the CD sold 2.6 million copies in the U.S. and more than 6 million worldwide. It was followed by sequels "Chant II" and "Chant III," among others.

But that was two decades ago, and times have changed -- both musically and religiously. Buying albums has become passe. Today's fans graze on music a track at a time on streaming services, like a la carte appetizers. Interest in Christianity continues to decline, according to the latest surveys. So it seems especially paradoxical that an album showcasing the Catholic church's most traditional form of liturgical prayer would generate such interest.

The co-founder of the small label that put out "Benedicta" believes it's no accident.

Fitzgibbons had wanted to record the Norcia monks since she first heard them in 2007 and recognized something special in the small community, which finally agreed late last year to make a CD.

The first clue was that the monastery's leader, Prior Cassian Folsom, had studied voice at prestigious Indiana University before becoming a monk; he and many of his brothers sound not just prayerful, but musically trained.

And while many monasteries today are full of elderly monks, the clear-voiced Norcia community's "average age is 33 -- that's another reason they sound so good," she said. They are "the best of professional choral singers, a community that loves the prayer and the singing."

It doesn't hurt that the album was produced and engineered by multiple Grammy winners Christopher Alder, who has worked with the likes of Placido Domingo, and Jonathan Stokes, who recorded on-site at the monastery.

The monks have an interesting back story, too. Folsom founded the community of 18 men, half Americans, in Rome but the townspeople of Norcia recruited them to move into the ancient monastery there -- built on the birthplace of the Benedictines' founder, St. Benedict, and his twin sister, St. Scholastica. The monastery had been continuously occupied from the 10th century until 200 years ago, but no monks had lived there since -- until the group arrived in 1998.

De Montfort and international distributors Decca Classics/UMC, the largest distributor of classical music in the world, aren't marketing "Benedicta" as what Fitzgibbons calls "mood music." But she gets feedback from fans who say they find Gregorian chant soothing and relaxing.

"The time that is carved out for this music is very peaceful time," she said, adding that "younger listeners are more open to eclectic music than even in 1994."

Real Gregorian chant is, first and foremost, a form of prayer, based on the Psalms and other ancient texts. It has been "sung over centuries and centuries," said Folsom, and to monks, "chant is part of the air we breathe."

But you don't have to be a monk, or even religious, to understand its timeless appeal.

"Someone who is listening to this without any background, will be drawn, I think, just by the beauty of it," he said. "Beauty, and -- I suppose people might say it's somewhat ethereal. ... They can connect it with some sort of spiritual experience, even without being able to name what that spiritual experience might be."

Culture | Churches may be in decline, but Gregorian chant beats secular competition