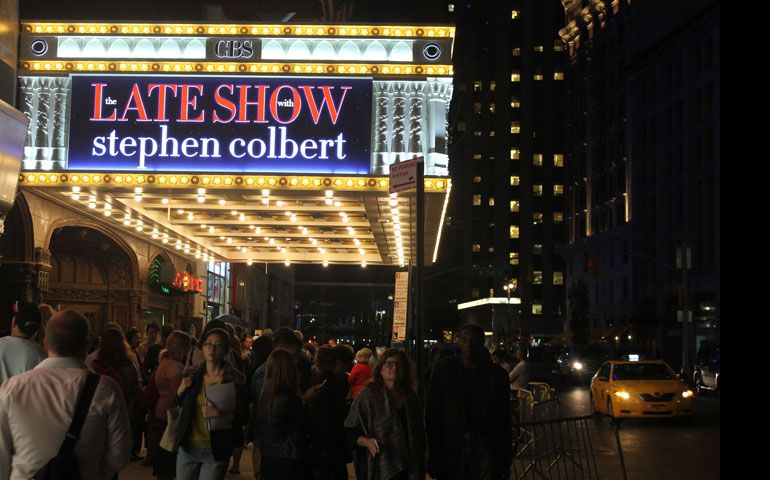 View from outside the Ed Sullivan Theater, New York (NCR / Brian Roewe)
This article appears in the Francis in the United States feature series. View the full series.

New York — About 50 people preceded me in line when I arrived around 1:30 Thursday afternoon at the Ed Sullivan Theater, just north of the glitz of Times Square. Armed with a Hello Deli hero sandwich, a smartphone and an Austen Ivereigh biography on the pope, I was ready to begin my wait.

What was inside the historic doors?

Less than a month into its debut, "The Late Show with Stephen Colbert" had scheduled a televised papal prep rally. Was it divine intervention that America's most famous Catholic would begin taping his new late-night show around roughly the same time that Pope Francis landed in New York for the second leg of his three-city U.S. visit?

Minutes after CBS released the guest list for the Sept. 24 show, I had contacted the show's press liaison. How could a young Catholic journalist not see the story potential of Stephen Colbert hosting an archbishop (Thomas Wenski of Miami), a comedian (Jim Gaffigan), a journalist (Maria Shriver) and a writer (Andrew Sullivan) ... all coincidentally Catholic ... all on the same night?

Whether an act of God or result of skillful planning, the night, viewed from my fourth row aisle seat, lived up to its billing, as Colbert the Catholic comedian processed from papal pun to Catholic quip to an insightful panel discussion. Even the pontiff showed up (more on that later).

Inside the queue, now standing beneath the marquee that for 33 years housed the name of David Letterman, a quiet fear of "being outed" accompanied me. My efforts at backstage access had proved porous: Several emails went unreturned, others told of unavailable media passes. With the backdoor closed off, I turned my attention to the front.

An audience ticket in hand, I planned to observe the show like any patron, except file a story afterward. But would I be blacklisted, with my name marked with a red "do not enter" circle stamped on it? Maybe every journalist at some point has visions of gonzo grandeur run through his head. Where drugs often accompanied Hunter S. Thompson's waylaid reporting treks, my only paraphernalia was a Pope Francis bio. Would this become my desert race?

The fears of access denied proved unfounded, as I effortlessly maneuvered the first of three queues. Given a hand stamp and a paper square numbered 50, a page informed me to return at 3:30, where I'd again find my designated place in line -- no. 50 -- and wait to finally enter the Ed.

In my time in between queues, signs of the pope's pending visit to New York presented themselves. Fr. Edward Beck, freshly off his latest appearance on CNN no doubt, passed by quietly and confidently. Three more priests, all gray-haired and in collars would later enter the theater, where they would play passive foils to the warm-up comedian's jokes. Fresh off securing their "Late Show" tickets, a couple dressed in Cincinnati Bengals garb excitedly discussed how "the archbishop is on the show tonight." Another group talked about family plans in Philadelphia for attending -- or avoiding -- the World Meeting of Families, the event that originally lured Francis to the U.S.

For awhile, I staked out the theater's 53rd Street side entrance, hoping to spot the guests make their way in, or perhaps I could stumble into the elusive backstage area. With nothing transpiring, returning to the queue would have to do. Around 4 o'clock, we finally entered, passing the last checkpoint (baggage screening) before entering the theater … to wait in the third and final line.

A half hour later, CBS pages ushered us to our seats, sitting myself and three line friends in the fourth row. The renovated theater's digital stained-glass screens flashed more appropriately on this day. Combined with its domed ceiling, complete with Colbert faces adorning even more stained glass, the theater put forth the vibe of a Colbert Chapel.

After the warm-up taught us how to laugh like a TV audience, and John Baptiste and Stay Human, the Late Show's house band, roused us with a New Orleans-esque musical march, Colbert finally appeared. His question-and-answer session with the audience previewed the show to come, as most questions focused on the pope or the comedian's faith. After final instructions, the show was ready to begin.

Sprinting and high-kicking his way onto the stage, Colbert quickly confirmed my week-long suspicion: "Tonight, our entire show is dedicated to Pope Francis' historic visit to the USA. It's an hour long, so it might be the shortest Catholic service you'll ever sit through."

At first calling the night -- a result of months of planning -- as "Tour de Francis: A New Pope: I Heart NY Holy See: Humblefest 2016," sounded Colbert would opt for a different "popening" more reflective of Francis' modesty, scribbling with a Sharpie on a piece of cardboard the words "Welcome Frank!" Later, he reminded the pope, should be ever decide to be a guest (a long shot for a man who hasn't watched TV in 25 years), that he had a seat waiting for him befitting his humility: a metal folding chair with "pope" written across its back in white paint.

The Catholic host then offered a brief history lesson on the papacy, revealing among the pope's many titles his World of Warcraft user name (Athrog the Death Hammer), before later serenading Francis' friendship through a parody of James Taylor's song "You've Got a Friend."

Along the way, Colbert displayed his Catholic knowledge, reciting Gospel passages about St. Peter and describing Pope John XXIII as one of the most transformative popes. In reviewing Francis' Thursday, he noted that Congress cut short the pope's appeal to the Golden Rule by interrupting with applause after "Do unto others." And he contrasted Francis' call for a simple lifestyle with the merchandise sales accompanying his U.S. trip: $5 pope medallions, $30 Pope Francis cologne ("because what's more forbidden than smelling like a 78-year-old, celibate man") and a life-size Francis cardboard standee, so "if you're not able to attend one the events in the next two days, just put this in your bedroom and terrify your children."

The Catholic humor continued when guests Jim Gaffigan, Maria Shriver and Andrew Sullivan formed Colbert's "celebrity pope panel." Gaffigan, set to perform Saturday in Philadelphia at the Festival of Families on Benjamin Franklin Parkway, said the act was the beginning of a world tour, with other stops Vladimir Putin, the Dalai Lama, "and then I'll tape a special for ISIS."

But the panel had its serious moments, too. Colbert appeared to earnestly ask if his guests felt a tension between an American "spirit of individuality and we get to do anything we want, and the Catholic church has this spirit of, eh, not really," saying he feels it all the time.

Asked about the tension between his Catholic faith and being openly gay, Sullivan, a noted author and blogger, responded to roaring audience approval, "I'm openly gay because I'm a Catholic, because I was brought up to tell the truth about myself, and because I was taught to treat every human being with equal dignity and love and compassion."

Shriver, the niece of President John F. Kennedy who has conducted surveys of American Catholics' beliefs, described her consideration of entering a convent. On Capitol Hill earlier in the day for Francis' address to Congress, she called it "so inspiring," specifically his words on the Golden Rule and how all can feel like a foreigner in some way. Colbert noted the speech wasn't easily pigeonholed into left/right boxes.

"He said a lot of things that I think you can take into your own life, regardless if you're Catholic or Jewish or Muslim or Hindu, and really about kind of seeing your fellow man or your fellow woman with compassion," Shriver said.

For Gaffigan, a comedian who occasionally relies on his Catholic roots for his material, said he was agnostic or atheist for most of his adult life before Francis' message of mercy drew him back to the faith.

"The reason I'm a Catholic is the notion of mercy because I am such a horrible person, I need to know that there's someone forgiving me," he said.

Apparently up to date on the goings-on of the bishops' conference, the host asked the archbishop of recent talks among his peers "about getting some of the pope's mojo."

"I think the theological word for mojo might be grace," Wenski said. "And we want to share the grace of the Holy Father … because he represents a new tone in the church as you see people are willing to give the church another look or another listen."

As the show neared its end, Colbert peeked from behind his cardboard Francis as he introduced musical guest YMCA Jerusalem Youth Chorus, an ensemble of students from East and West Jerusalem who against a heavenly backdrop of gliding digital clouds sang a gospel rendition of Three Dog Night's "Joy to the World." After hours spent in hunt of The Late Show's "Catholic Night" story, the song, at first leaving us in the audience uneasy whether we could laugh, ultimately provided an appropriate summary of the "special popeisode":

"Joy to the fishes in the deep blue sea, joy to you and me."