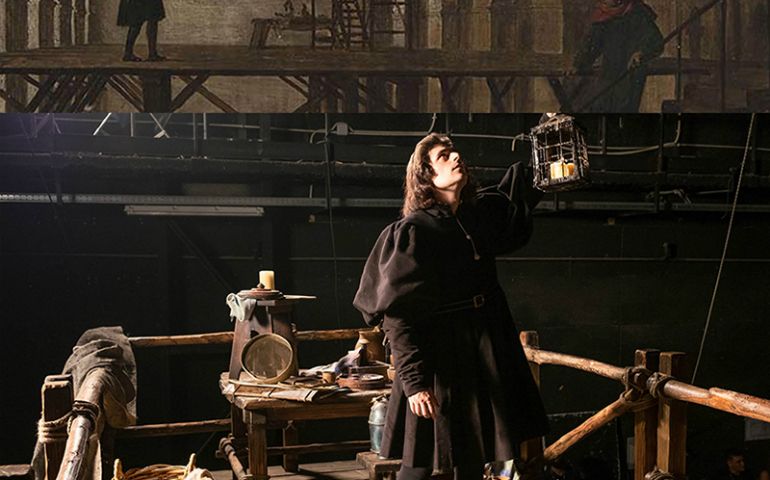 Italian actor Flavio Parenti, as Raphael, in a scene from the Sistine Chapel in the 3D film “Raphael – Prince of the Arts.” (Sky and Nexo Digital)

He was a child prodigy who became one of the most famous artists in the world, and more than 6 million tourists come to see his work at the Vatican Museums every year.

Raphael Sanzio, better known simply as Raphael, covered the walls of the pope’s Vatican palace in ornate frescoes and filled the Sistine Chapel with tapestries modeled on his designs before he died in 1520 at the age of 37.

Now, for the first time, the legendary Renaissance painter and architect is being celebrated on screen in a 3D film produced by the Vatican Museums and media partners Sky and Nexo Digital, with the backing of the Italian cultural ministry.

The film may be the closest thing to standing in front of Raphael’s works themselves.

It takes viewers behind the scenes into the pope’s private palace but re-creates moments of the artist’s life from the era in which he lived, 500 years ago. Some of the scenes were actually shot in the rooms where he painted his most famous fresco, “The School of Athens,” which features nearly all of the ancient Greek philosophers.

Titled “Raphael – Prince of the Arts,” the film features Italian actor Flavio Parenti playing the role of Raphael while other actors portray Leonardo da Vinci and other leading artists of the era. The film gives viewers a close look at more than 40 of Raphael’s masterpieces.

At a media conference Tuesday (March 21) inside a room at the Vatican Museums filled with huge tapestries that Raphael designed, Barbara Jatta, director of the Vatican Museums, called the movie is “a perfect synthesis” of art, technology and cinema.

The film will be released in Italy in April and eventually shown in 60 countries, including the U.S., where a September release is planned. The movie re-creates the artist’s life from his childhood in the small town of Urbino to his triumph as one of Italy’s most beloved artists.

Raphael is buried inside the Pantheon in central Rome.

Forty locations are featured in the film — places Raphael lived and worked — including Milan, Florence and Rome, as well as the frescoed rooms (now known as the Raphael Rooms, a part of the Vatican Museums) that he painted for Pope Julius II between 1508 and 1511.

The film also takes viewers behind closed doors to the private loggia of the pope’s apartment, where graffiti left by invading vandals during the sacking of Rome in 1527 are still etched in the decorated walls.

One of the highlights is the virtual reality reconstruction of the Sistine Chapel as it was when the seven tapestries designed by Raphael were first displayed there in 1519.

“This is the masterpiece of all masterpieces,” Paolucci said. “Before he lost consciousness, his final brush was on ‘The Transfiguration.’ Nothing compares with it.”