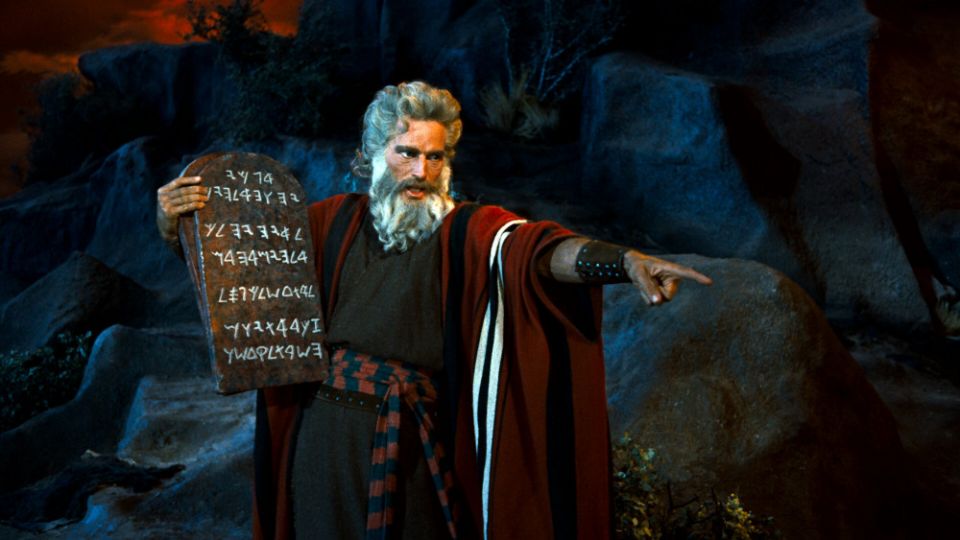 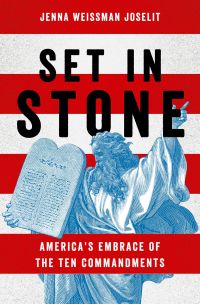 When they imagine the Ten Commandments in their mind's eye, most are likely to see a petrified take on the McDonald's logo. This has a lot to do with references as varied as Rembrandt's Moses and Charlton Heston's role in Cecil B. DeMille's "The Ten Commandments."

Depictions of the Ten Commandments abound on Google shopping searches: T-shirts, lawn ornaments, bookends, rings and coffee mugs. From one perspective, it's yet another absurd commodification of the sacred. But in this case, the Mosaic tablets themselves were material objects, which is easy to forget, given their absence.

"Comparable stelae, hefty stone tablets from the ancient world, are on display at the British Museum in London, the Louvre in Paris, the Pergamon in Berlin, and the Metropolitan Museum of Art in New York, but the Ten Commandments are nowhere to be found," she adds.

And yet, replicas approximating the tablets make regular headlines. The Supreme Court recently sided with a lower court ordering a Ten Commandments monument removed from a New Mexico city hall grounds. But the ruling lacks consistency, noted an Associated Press report. A Commandments poster was deemed constitutional in a Kentucky courthouse, while a monument alongside an Arkansas public building was not.

The book examines the political controversies. "These days, many Americans strongly object to their [the Commandments'] presence, claiming it upsets the precarious balance between church and state and stands on its head the intentions of the Founding Fathers," she writes. "Unwilling to acknowledge the civic authority of the Ten Commandments … their detractors seek to dislodge them from the public square."

These latter-day detractors, she notes, would have the Commandments go the way of the ones that Moses smashed the first time around. And opposite them, an equally powerful set of voices calls for the monuments to hold their ground. "If this segment of the population had its druthers," Weissman Joselit writes, "there would be even more of them."

To understand this controversy, which doesn't seem to be going away, Weissman Joselit prescribes going back to the beginning, which to some is DeMille's 1956 film, a phenomenon to which the book devotes a considerable volume of ink. In the introduction, she questions why one needs yet another book about the separation of church and state and about Moses, when bookshelves already sag under that collective weight.

"By situating these age-old rules within the context of modern America, where, ever since the mid-nineteenth century, a broad swath of the population — archaeologists and architects, building committees and set designers, politicians and savants — took their measure, my account frames the Ten Commandments as an occasion for storytelling, an exercise in history," she writes.

Those stories include a fascinating and colorful cast of characters. There is the surveyor David Wyrick, who in 1860 ran to the town of Newark, Ohio, "like a crazy man," his son remembered, holding what he claimed was an artifact of the 10 lost tribes and an apparent "Hebrew" version of the Ten Commandments.

In 1850, when Congregation Anshi Chesed ("righteous men") dedicated its new Norfolk Street synagogue building, which had an unconventional stained-glass window depicting the Ten Commandments in the round, rather than in the typical two tablets, the depiction divided the New York congregation almost to the point of dueling. A self-christened "Honestus" wrote for The Occident and American Jewish Advocate, "Could the prophet [Moses] himself see them, I question his being able to recognize them in their new and novel appearance."

"Anathematizing novelty," Weissman Joselit writes, "Honestus's blistering attack made it seem as if Congregation Anshi Chesed had committed the most egregious of sins: deliberately cutting itself off from its roots, even turning its back on Moses."

But beyond their dramatic supporters and opponents, the Ten Commandments themselves appeal to timeless consumption and interest — one might say today that they are "clickbait."

Then there is DeMille, who joked that his ancient Egypt set could convince future archaeologists that California was the Egyptian desert. DeMille could thank the Fraternal Order of Eagles for his film's rising star. And President Harry Truman, who received an illuminated Ten Commandments print from the Eagles, said the U.S. government was "patterned to some extent from the law presented to Moses at Mount Sinai."

But beyond their dramatic supporters and opponents, the Ten Commandments themselves appeal to timeless consumption and interest — one might say today that they are "clickbait."

"Pithy and direct, aphoristic and handy-dandy, the text was of a piece with the snappy advertising copy of the marketplace and the memorable, stay-in-your-head jingles increasingly heard on the radio," Weissman Joselit writes. "That their authority also derived from numbers furthered their appeal. There was something unassailable, something unmistakably modern, about a system whose foundation rested on counting from one to ten."

The Commandments would become, she adds, "America's ultimate to-do list."

Pope says memorize the beatitudes, assess your care for the needy