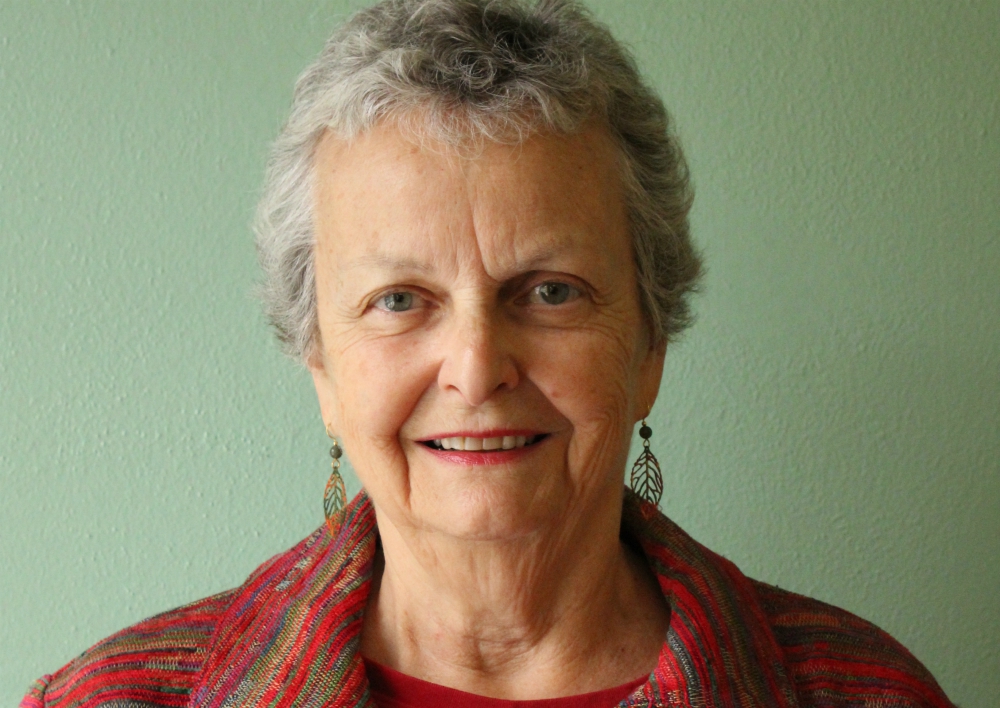 NCR's recent review of Jim Forest's "biography and memoir" of Dan Berrigan included a photo that features but does not identify a tall woman sporting sneakers and carrying a cross.

That's Davida Coady, a coal miner's daughter and a physician activist who died May 3, the night before the photo showed up in my inbox.

As reviewer William O'Rourke points out, Forest's book serves as "a history of the Catholic radicalism of the past 50 years."

In a similar way, a look at Davida's life documents the ways big and small that Catholicism animated a half-century of service by a woman who could never fully embrace its particulars.

Davida was among those listed by John Dear in his 2007 NCR column "Women, peacemaking and the church." I'm sure she enjoyed showing up alongside the likes of Joan Baez, Benedictine Sr. Joan Chittister, Kathy Kelly and Mother Teresa. Especially Mother Teresa, since the good sister once proposed that Davida become a nun and serve as her medical director in Calcutta, India. (Although Davida had lived in a convent briefly while working in a clinic in Southern California, she declined both offers.)

Named "Bay Area Catholic Woman of the Year" by Catholic Charities in 1998, Davida was described as "a saint" by Monica Clark, the retired editor of Oakland's diocesan newspaper.

"She embodied Jesus' love and outreach," Clark said in a phone call a week after Davida died. Clark also described her as the sort of saint unlikely to get too far with a canonization committee.

Tributes in recent days have highlighted Davida's fearless dedication to public health in Africa and Asia, her defiant resistance to repressive regimes in Latin America and her groundbreaking addiction treatment initiatives in her hometown of Berkeley, California.

Hers was a life of lasting accomplishment fueled by the sort of stubborn focus, stunning generosity, incisive judgment and self-deprecating humor that her friends came to appreciate and, at times, put up with.

From left: Davida Coady in Biafra; as a pediatrician at the free clinic she started in Venice, California; with her husband, Tom Gorham (Photos courtesy of Coady-Gorham family)

I first met Davida nearly 20 years ago after she recruited my wife, Carol, as a volunteer psychologist for Options Recovery Services, the addiction treatment program that Davida started in Berkeley. Davida later married the first client Carol mentored at Options, Tom Gorham, and the four of us have remained friends ever since.

A few years ago, Davida invited me to tag along with her to an Alcoholics Anonymous meeting where she'd been invited to tell her story as the evening's guest speaker.

She described what happened after she took her last drink on Oct. 30, 1989. On a flight that night to Israel with a group supporting a Muslim-Christian town under siege by Israeli forces, Davida said she resisted having a drink because she wanted to remain fully alert on what was likely to be a dangerous mission.

So instead of being fast asleep when the flight crew asked if there were a doctor onboard, she was able to leap from her seat and save the life of a choking woman at the front of the plane.

Somehow, Davida had managed to put herself in the shoes of the wise virgins whose story is recounted in Chapter 25 of Matthew's Gospel, the women who had oil for their lamps when it was needed most.

That story came to mind this week after a conversation with Bill Joyce, a longtime friend of Davida's who worked with her and the late Fr. Bill O'Donnell on the social justice committee at Berkeley's St. Joseph the Worker Church. O'Donnell's protest activities got him arrested about 250 times, Davida about 50.

I asked Joyce: "What kind of Catholic was Davida?"

He responded: "She took seriously Matthew 25 and she lived it."

In addition to the virgins and the lamps, of course, Matthew 25 recounts the virtue of seeing God in anyone in need of food or shelter or, as Davida demonstrated, decent medical care or help with an addiction.

"She was a Pope Francis Catholic," said Fr. Tom Weston, a Jesuit long active in the recovery community who gave Davida the last rites before she died. "She was pastoral, she was directly involved with people and she was not particularly concerned with rules and regulations."

In her 30s, Davida was married briefly to a former priest named Pat Coady, who is now deceased. Both Pat and Davida were drinking heavily and the marriage didn't last.

Several weeks ago, with ovarian cancer about to draw her life to a close as she approached her 80th birthday, Davida asked Carol to make some notes about her memorial service.

She said she wanted Weston to conduct a Catholic service at Berkeley's Northbrae Community Church, the nondenominational church she attended as a child.

In her recently published memoir, Davida recalled the pastor's endorsement of John Stuart Mill's advice to pursue "the greatest good for the greatest number of people."

Looking back, Davida wrote: "That stuck with me. ... I didn't know it then, but that simple phrase — greatest good for the greatest number of people — guided my entire adult life." Davida's memoir is titled The Greatest Good. 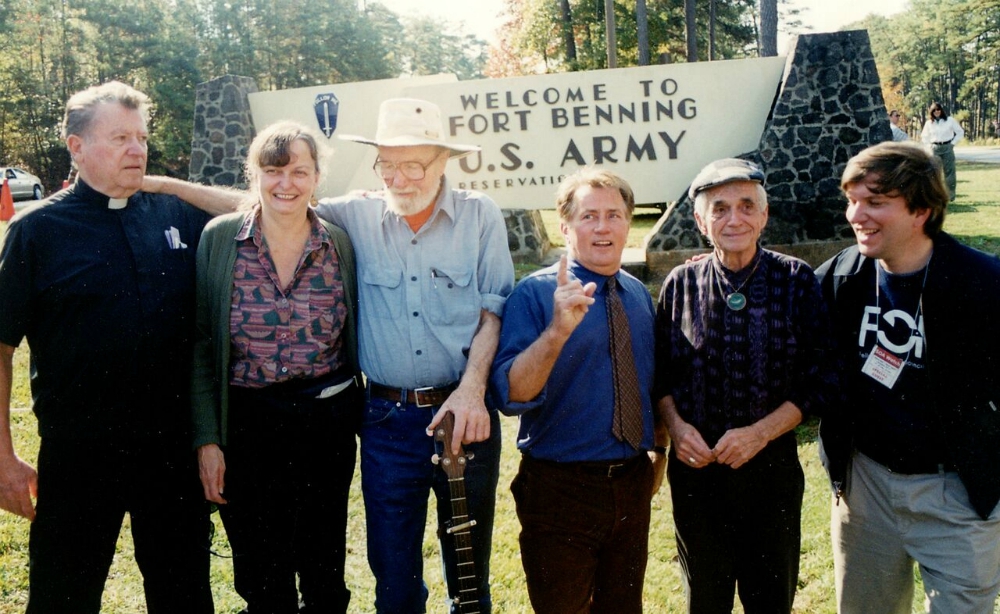 Years later, fighting famine in Biafra and smallpox in Bangladesh, Davida said it was an Irish Spiritan priest named Aengus Finucane, who worked with the humanitarian agency Concern, who kept her focused on that classic goal of moral ethics.

Back in the U.S., Aengus and his brother Jack, also a priest, connected with Davida during fundraising trips and introduced her to other Catholics working for social justice. "Between Concern and the United Farm Workers," she recalled in her memoir, "I was surrounded by Catholics."

She decided she wanted to learn more.

She got her hands on a copy of the Dutch Catechism, unaware that it had been banned by Cardinal James Francis McIntyre, archbishop of Los Angeles from 1948 to 1970. Published in 1966 in the Netherlands and subsequently widely translated, it was the first Catholic catechism following the Second Vatican Council, but ran afoul of church authorities.

"Geez," she recalled thinking, "there's nothing in here that I don't agree with."

She added: "It was all about community and service, and all this stuff I'd grown up to believe ... with no emphasis on hell or sin or patriarchy or hierarchical nonsense, and an ecumenical message that embraced even Eastern religions."

Donations in memory of Dr. Davida Coady can be made to Options Recovery Services at optionsrecoveryservices.org (1931 Center St., Oakland, CA 94704) or the San Carlos Foundation at sancarlosfoundation.org (1612 Virginia St., Berkeley, CA 94703) or the Hesperian Foundation at store.hesperian.org/ctgy/donations.html (1919 Addison St., Suite 304, Berkeley, CA, 94704).

After taking instruction and becoming a Catholic, she said she "remained outraged that women weren't allowed in the hierarchy and paid no attention to the enumerated sins and confession process. I considered all that garbage and superstition."

She also had problems with the Eucharist as a sacrament restricted to Catholics in good standing.

"Normally, I don't participate in communion, because I don't think anyone should be excluded from a meal with me," she wrote in her memoir. "But I have a friend who's very Catholic, Martin Sheen, and he always wants me to go to communion, and with him I will."

When Carol and I showed up at Davida's hospital room the week before she died, Sheen was at her bedside, reading aloud to her from her memoir.

In the nearly four decades since the actor/activist had been referred to Coady for shots before an overseas trip, they collaborated on a wide range of protest and solidarity efforts. Sheen ended up serving as honorary chair of Options and vice president and financial backer of the San Carlos Foundation, which Davida started to help people living in extreme poverty.

Concluding the chapter titled "Why I Did It All," Davida referenced a biography of Fr. Aengus Finucane. She wrote:

[Bill Mitchell is a former NCR board member who can be reached at bmitch@gmail.com. He adapted some of this article from an obituary he published at bit.ly/davidacoadyobit.]