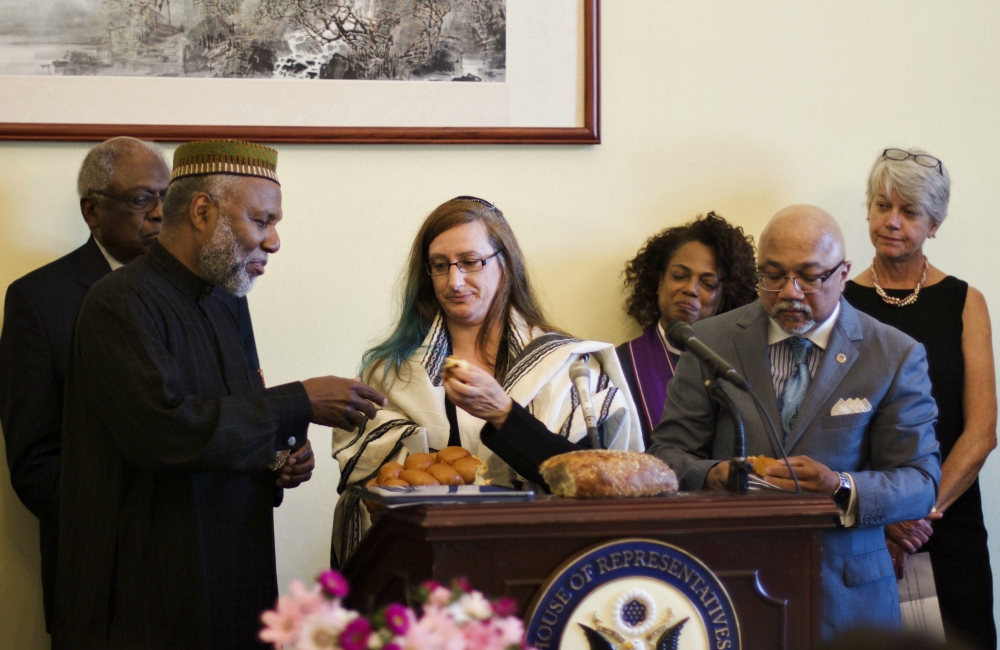 A rabbi shared challah, a Protestant minister doled out what appeared to be a loaf of wheat bread, and an imam passed around cornbread.

"We are definitely breaking bread today," said Imam Johari Abdul-Malik, a member of the executive committee of the Muslim Alliance in North America.

"Bread is life-sustaining blessing from a merciful God, and a primary way to combat hunger," added the Rev. Barbara Williams-Skinner, as she held up the wheat loaf during the prayer service in the Cannon House Office Building. The event was organized by Rep. James Clyburn (D-South Carolina), chair of the Democratic Faith Working Group in the U.S. House of Representatives.

The literal gesture of sharing bread served as a symbolic reminder across faiths of the requirement to feed the hungry, as Congress considers a new farm bill that would dramatically scale back funding and access to the nation's primary anti-hunger initiative, the Supplemental Nutrition Assistance Program (SNAP).

As part of the House's proposed Agriculture and Nutrition Act of 2018, HR 2, SNAP benefits would be cut approximately $20 billion over the next decade, according to a Congressional Budget Office report released May 2. A portion of that spending would be diverted to government job-training programs.

The report estimated 1.2 million adults per month would lose benefits due to stricter work requirements in the bill. HR 2 would require able-bodied adults ages 18 to 59, up from 49, to work or participate in a training program a minimum of 20 hours per week, with that threshold increasing to 25 hours per week by 2026.

First-time violators of the rules would be ineligible to receive SNAP benefits for a year, with a subsequent violation resulting in a three-year ban. Currently, SNAP access is restricted to three months in three years for people not working or in training or education programs at least 80 hours a month.

Of the 1.2 million adults that the Congressional Budget Office estimated would lose benefits under the new work requirements, 62 percent, or 744,000, are in households with children ages 6-17.

An additional 400,000 households would stand to lose SNAP benefits through the bill lowering the automatic qualifying threshold from a gross monthly income of 200 percent of the federal poverty level to 130 percent. That loss of eligibility would also result in children in such households losing access to free meals at school, affecting approximately 265,000 children annually, according to the report.

Approximately 44.2 million people participated in the SNAP program each month in fiscal year 2016, according to the U.S. Department of Agriculture. Two-thirds of participants were children (44 percent), elderly (12 percent) or living with disabilities (9 percent). About one-third of households receiving SNAP benefits had jobs, though their average income was 61 percent of the poverty line, or $813 per month. Still, the majority of SNAP households did not receive federal or state welfare benefits, with only 8 percent participating in temporary assistance programs.

Rep. Jamie Raskin (D-Maryland) said the attempts to cut back SNAP benefits, estimated at an average cost of $1.40 per meal, at a time of massive increases in military spending was startling.

Network, the Catholic social justice lobby, is among the faith groups lobbying against the House farm bill's passage and, at the same time, placing support behind bipartisan talks in the Senate around a farm bill absent new SNAP work requirements.

Dominican Sr. Quincy Howard, Network's government relations fellow who offered the closing prayer at the interfaith service, called the stricter work requirements "extremely punitive" and not reflective of the realities facing low-income workers, who she said often don't have control over their work schedules, and also face barriers in the way of lack of transportation, disabilities and lack of jobs in an area. 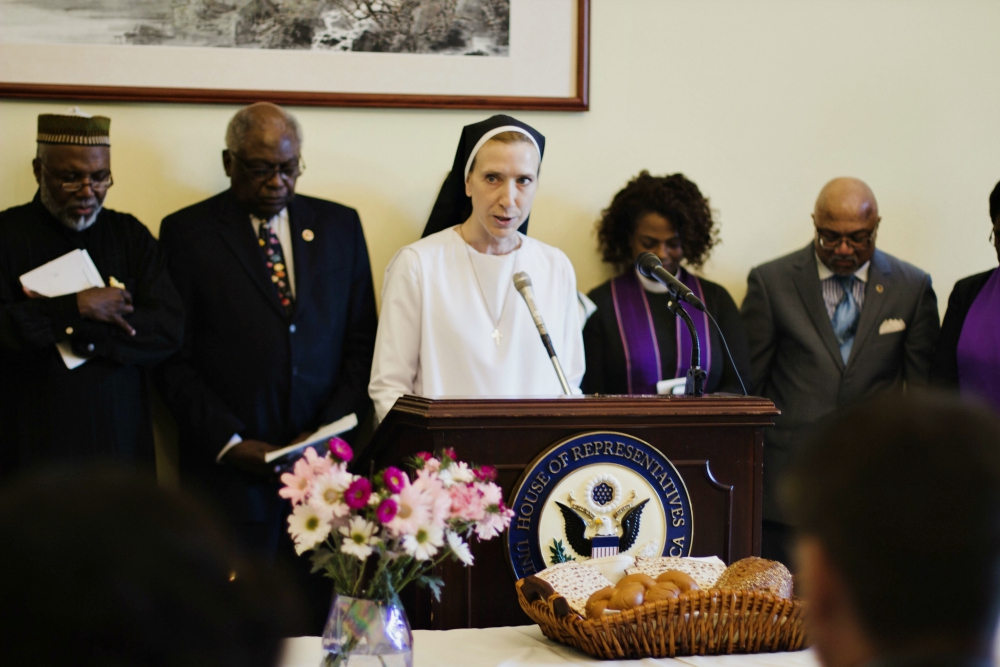 While Network supports workforce development programs generally, Howard said the proposals in the House bill provide inadequate funding, as little as $30 monthly per person, while at the same time taking away funds from the food assistance program that has yielded successes. Additional workforce funding, she added, would be more effective after more data becomes available in the next year from pilot programs created by the 2014 farm bill that explored what approaches assist low-income workers most.

More broadly, Howard said Network sees in the bill a latent narrative of "demonizing the poor."

"There's an underlying assumption in all of this that the people who use SNAP would prefer not to work and so you have to make them work," she said.

During the interfaith service, Rabbi Alana Suskin noted that the Jewish reading this week, from Leviticus, "informs us if your brother is becoming poor and unable to support himself, then you must support him." She explained that "brother" refers to anyone dwelling in one's land, and referred to SNAP as "the nation's most important anti-hunger program and the cornerstone of the federal nutrition safety net."

"The Jewish tradition tells us explicitly that it is an offense to God when we do not feed the hungry. ... Changes to SNAP are an attack on broad swaths of the American public, including the elderly, women and children, all the vulnerable people that Scripture commands us to aid," Suskin said.

After the breaking and sharing of bread, Suskin and Abdul-Malik joined Timothy Boddie, general secretary of the Progressive National Baptist Convention, as he prayed, "To this nation you have given so much, teach us, God, to give, teach us to share, teach us as a nation to provide our daily bread for the loss, the left out and the least of these."

At one point, Boddie paraphrased a prayer delivered by Jesuit Fr. Patrick Conroy, the recently reinstated House chaplain, that the priest delivered in November as the House debated tax reform.

"May we be mindful that the institutions and structures of this great nation guarantee the opportunities that have allowed some to achieve success, while others continue to struggle. And may the efforts of our lawmakers guarantee that there are not winners and losers, but benefits balanced and shared by all," Boddie said.

Howard closed the service by praying, "Bless our work to soften the heart of a generous nation. For we know that it is giving that we receive, and that there is a universal holiness in food for the hungry."