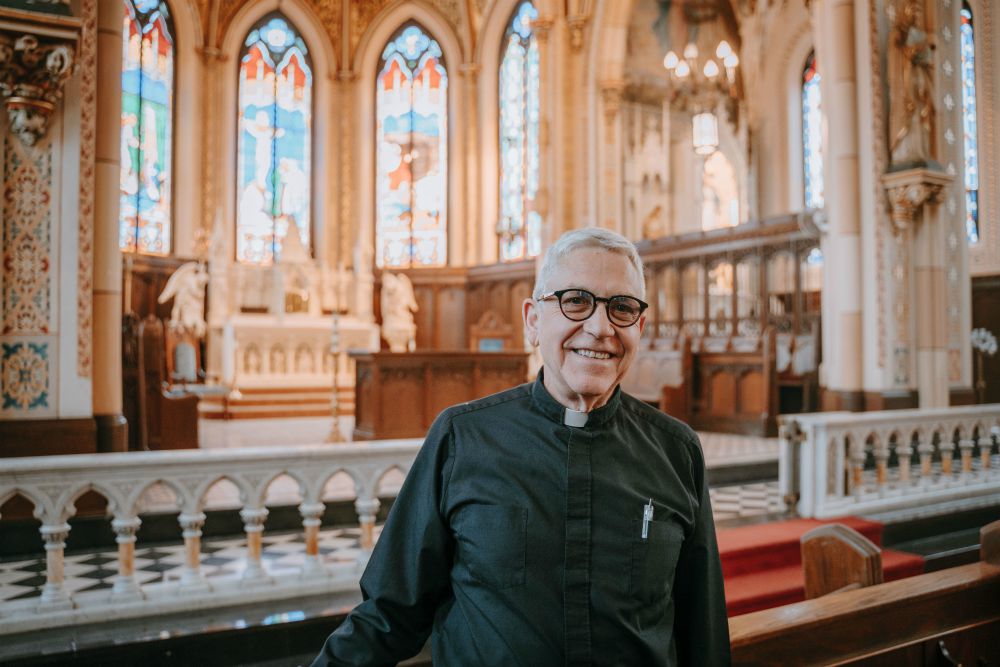 Fr. Maurice Restivo poses for a photo in Our Lady of the Assumption Church in Windsor, Ontario, June 14. Founded in 1767, the Canadian church needs $20 million dollars in repairs. (CNS/Detroit Catholic/Valaurian Waller)

Detroiters might soon notice a bronze glow on the horizon as they stare south across the Detroit River.

Across the river from historic Ste. Anne de Detroit in southwest Detroit stands her sister parish: Our Lady of the Assumption in Windsor. The two historic French-established parishes stand a mile apart from each other, separated by the international border that divides Canada from the United States.

Since its founding as a mission of Ste. Anne Oct. 3, 1767, Assumption has been the cultural home of Catholicism in Windsor and western Ontario. Just about every parish west of Montreal can trace its history to the church.

But all that history is in need of some maintenance, as damage to the roof and interior plaster has forced the parish to stop holding Mass in the current church, finished in 1845. Sunday Mass is currently celebrated at its cluster partner, Holy Name of Mary Church, and weekday Masses are in the 1907-built Rosary Chapel on Assumption's grounds.

Now, a group of dedicated volunteers is looking to raise a grand total of $20 million for a complete restoration of Assumption Church, the Rosary Chapel and rebuilding of the sacristy.

Led by Windsor lawyer and Assumption parishioner Paul Mullins, the parish community has begun a fundraising campaign to raise $2.25 million for the first phase of the project, which will replace the leaky roof with an all new copper-shingle roof that will maintain the historic nature of Windsor's oldest church.

"We are close to raising the money to complete the first phase," Mullins told Detroit Catholic, the online news platform of the Detroit Archdiocese. "We are working on a 'pay as we go' strategy, because we don't want to leave the parish with debt. The first phase is going to be $2.25 million, and we have just under $2 million on hand, with $1 million coming from the Diocese of London, who has committed to the plan."

Right now, the parish has begun the first phase of the project, which will involve replacement of the roof, asbestos remediation and a water heating system through the church.

Using $500,000 from a previous campaign and money from the London Diocese, the parish has begun work on the project that should be completed by the fall, said Basilian Fr. Maurice Restivo, pastor of Assumption Parish.

"We have met the recommendations from the Windsor Heritage Board and have taken our plan through the City Council," Restivo said. "The roof was seen as the first priority because of the asbestos in the roof, and the asphalt shingles are in really bad shape. The shingles are peeling off, and the roof is in rough shape. Because of the heating system, we had to close the building in the winter. We installed an electric heating system, but it was inadequate for a church of this size."

To help raise money for the roof and for further restorations, the parish is selling copper shingles for donors to sponsor. For $250 a shingle, donors can put their name or the name of their family on a shingle to go on the roof.

It will take an estimated 3,500 shingles to cover the roof, meaning the parish could raise a potential $875,000 from the shingle sales. Restivo said the parish has sold almost 2,000 shingles to date. 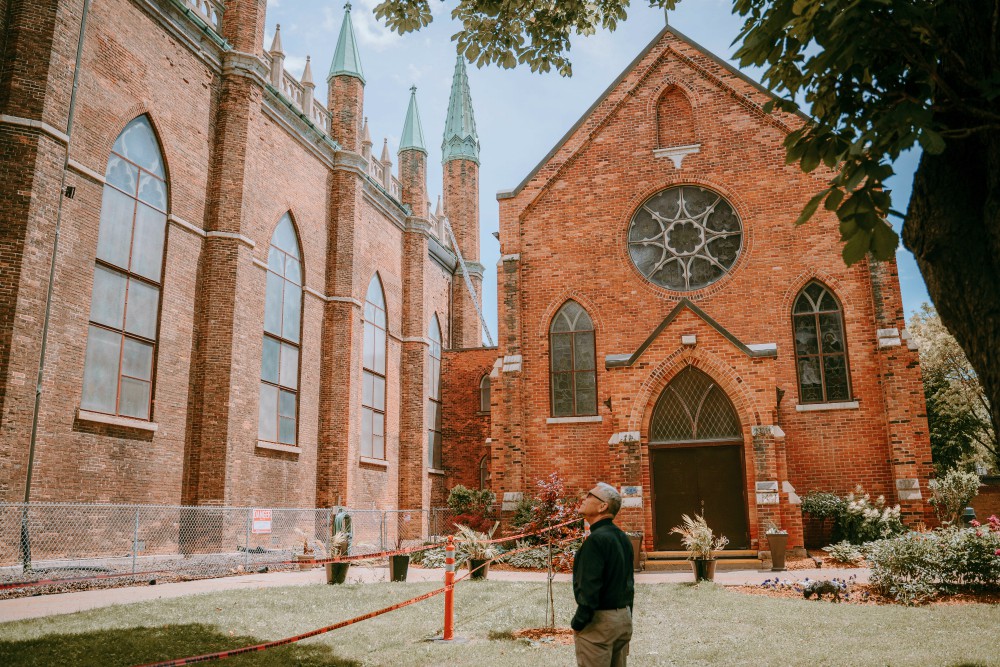 Work is expected to be done on the roof by the fall; the next phase would be a total restoration of the interior plaster coating and ceiling paint restoration, which is projected to cost an estimated $2.25 million and could start in the summer of 2020.

"The reason we chose what we chose for phase one of the project is the roof needs to be done — it's essential — but we also wanted a very clear, visible sign to the people in the area that we are actually doing restoration work on the church," Restivo said. "With a new copper roof, you will see that from the [Ambassador] Bridge. The new copper roof will be a sign to Windsor that there is progress."

Founded as a mission of Ste. Anne de Detroit, Our Lady of the Assumption Among the Hurons was first a mission to the Huron Indians who lived northwest of the Detroit River.

Assumption was established as a parish in its own right Oct. 3, 1767, 100 years before July 1, 1867, when the British Parliament in Westminster passed the British North American Act of 1867, which united the three British colonies of Canada into a single dominion within the British Empire.

When Assumption was a mission and later a separate parish, locals didn't make too much out of crossing over the strait to get from Ste. Anne to Assumption, as both parishes were in the Province of Quebec.

"The history of this parish is really amazing," Mullins said. "The people who have a direct connection to Assumption Parish is what I find the most intriguing. It is the mother church for many of the churches in the area. Just about every parish between here and London was an offshoot of this original parish. Many families in the area have ancestors who were buried at Assumption Church, were married here or in some other direct connection."

As Windsor fell on hard times — much like in Detroit — the church was part of a series of reorganizations. The church has been closed since November 2014, when the parish merged with nearby historic Holy Name of Mary.

Mullins said shifting demographics have seen the parish become a home for students from St. Clair College and immigrants from India who have carved out a multicultural community on Windsor's west side.

The community outreach has led to many Catholics and non-Catholics alike take an interest in the church's renovations.

"There is no question about the historical significance Assumption has in in our community," Mullins said. "I'm amazing by how we have received major contributions from people who are not Catholic, but really cherish Assumption because of its place in the community. It's really encouraging to know and see how strongly people really celebrate fact the restoration project is being undertaken. There is a genuine excitement over the idea of the cooper shingle roof coming up."

Restivo said the commitment of $1 million from the London Diocese coupled with funds from other contributors shows a real interest in keeping Assumption open as a beacon of faith in Windsor.

[Dan  Meloy is a staff writer for Detroit Catholic, the online news platform of the Detroit Archdiocese.]