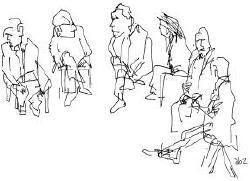 In a last-ditch effort to keep sealed thousands of pages of records dealing with 23 clergy sex abuse lawsuits, the Bridgeport, Conn., diocese is taking its case to the Supreme Court.

Most legal experts say the possibility that the high court, which annually chooses to hear only a tiny fraction of potential cases, would select the Bridgeport case is extremely slim. The court, currently in recess, will not consider the request until it begins its next term in October.

Even so, the move, which follows patterns of extended legal resistance in other key dioceses, highlights the lengths to which the church is willing to go to avoid public disclosure. The documents include letters and testimony indicating how its officials handled the sex abuse crisis.

The move also highlights anew the clash of First Amendment claims between those who contend that the community has a fundamental right to know in cases involving alleged criminal activity, and those who fear that courts, by demanding that the church reveal the documents, are intruding on the guarantee of religious freedom.

At the center of the dispute are more than 12,600 pages of depositions, exhibits and legal arguments relating to some 23 lawsuits involving seven priests. The records were sealed in 2001 when the cases were settled for undisclosed amounts.

Following the settlements, four newspapers -- the Hartford Courant, The Boston Globe, The New York Times and The Washington Post -- petitioned to have the documents released. The documents would presumably reveal details of how Cardinal Edward Egan, recently retired as archbishop of New York, handled the sex abuse crisis during his tenure as bishop of Bridgeport from 1988 to 2000.

Bishop William E. Lori succeeded Egan in Bridgeport in 2001. Egan, testifying in an abuse trial, once famously explained that the diocese could not be held responsible for the activities of clerics because priests were independent contractors.

Interest in documents surrounding the sex abuse crisis is keen, especially among newspapers and abuse victims, because such documentation in the past has often established that bishops were more aware of the nature of the crisis and the danger of sexually abusive priests than they had originally professed.

That was the case in Boston in 2002 when a judge there ordered the release of thousands of pages of documentation regarding the crisis in that archdiocese. Information contained in the published documents enraged Catholics and the wider general public and led to the removal of Cardinal Bernard Law as head of the archdiocese.

A similar furor erupted in Philadelphia after the release of a grand jury report that quoted extensively from volumes of documentation that the archdiocese had kept regarding accused priests who escaped criminal prosecution because the statute of limitations had run out.

In Los Angeles, the church has fought the release of documents for years, even though a settlement in 2002 involving more than 500 abuse cases stipulated that the material would be made public.

In the Connecticut case, the church has failed in its attempts in the state court. The Connecticut Supreme Court, in a 4-1 decision in May, upheld a lower court ruling calling for the release of the files.

The church appealed that decision and asked the state Supreme Court to reconsider, but the diocese was turned down again in July and later that month announced it would appeal to the U.S. Supreme Court.

In a statement announcing the appeal to the land’s highest court, the diocese said, “The case and the settlement were exhaustively reported on by the media. The attorneys and victims had access to the sealed documents at issue.”

Joseph McAleer, a spokesman for the diocese, had earlier told The New York Times, “Sadly, the history of this case has been about access by the secular media to internal church documents of cases more than 30 years ago to suggest, unfairly, that nothing has changed.”

Marci Hamilton, a church-state specialist who teaches at the Benjamin N. Cardozo School of Law at Yeshiva University in New York, says the church has no First Amendment protection in this case. “There is no First Amendment right of religious organizations to keep such documents secret,” she said in an e-mail response to a question from NCR. “The bishops have repeatedly argued in clergy abuse cases around the country that they should not have to produce records in response to discovery requests because of such an alleged First Amendment right. The courts have routinely rejected such far-reaching claims. The First Amendment was not intended to be a refuge for illegal or licentious behavior.”

Charles Haynes, senior scholar at the First Amendment Center in Washington, is less certain and is concerned that a decision requiring the church to release documents could cross into the area of state entanglement in religion.

In an interview with NCR, he said there are “real questions that have to be raised” in this case regarding both the establishment and the free exercise clauses having to do with religion in the First Amendment. “Under the establishment clause, the government shouldn’t be entangling itself with the church and its internal affairs. Under the free exercise clause, is this interfering with the church’s right to practice its faith the way it chooses without governmental interference? Internal documents are part of what the church is doing as part of its mission. There are serious questions under both clauses.”

He concedes, however, that the church has not done well in the courts with the First Amendment argument when it comes to keeping such records concealed.

The argument from the other side of the First Amendment, that made by newspapers and other groups interested in disclosure, is that “the public has a right to know, and that there’s a high public interest to know what went on -- what role the leadership of the church played given the significance of the cases and how many people were affected by this.”

Haynes said he thinks the possibility that the Supreme Court will consider the case is “very remote.”

“I could be mistaken, but the court takes very few cases to begin with, especially one that has fared so poorly in lower courts. ... I think in the end the church will be forced to release the documents.”

Tom Roberts is NCR editor at large. He can be reached at troberts@ncronline.org.