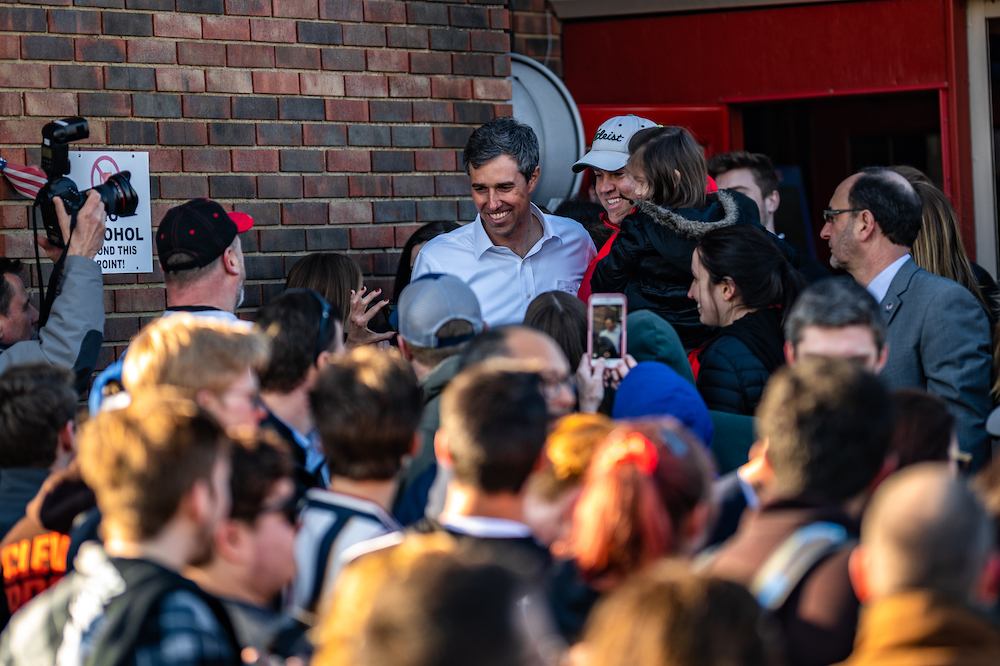 Former Rep. Beto O'Rourke is running for president, and in some ways his is the most interesting candidacy so far. For example, his campaign launched with a cover story in Vanity Fair. The three-term former congressman is running on his personality, not his policies, still less his resume, and given the way 2016 played out, who is to say he is wrong?

O'Rourke is an astonishingly charismatic politician. Last summer, when he was running against Sen. Ted Cruz, a video of him responding to a question about football players taking a knee during the national anthem went viral. I posted it in one of my links columns. O'Rourke was passionate, respectful of the man who asked the question and clearly thought the protests were disrespectful. He acknowledged that people could come down on different sides of the issue, but he was unabashed in explaining how he saw the protests as squarely within the finest traditions of American democracy. It was extraordinary.

That video, and the fact that he was running against one of the least likable human beings on the planet, turned O'Rourke into a national phenom. Some of that excitement has carried over to his run for the presidency. Last year, in his Senate race, he raised almost $80 million and, last week, his first day fundraising total outpaced all his competitors for the Democratic nomination: $6.1 million. In January, Sen. Kamala Harris was bragging that she had raised $1.5 million in her first 24 hours. The only candidate to come close to O'Rourke's number was Sen. Bernie Sanders, whose leading advocates correctly discern in Beto a threat to their man from Vermont, as Jonathan Chait detailed at New York magazine.

In addition to his charisma, O'Rourke decided to forswear the use of pollsters and traditional campaign focus groups to devise his policy stances and campaign themes. This play for an authenticity that escapes most politicians and their handlers is the kind of thing Democratic Party officialdom does too infrequently and still fails to understand. Campaign staff and consultants certainly are not going to tell them. The reason so many people do not care when Donald Trump says something that is factually wrong is because he always comes across as authentic. He may be vulgar, he may be petty, he may be scary, but he is always himself. And after decades of politicians who were not authentic, voters will grab authenticity when they see it.

O'Rourke also swore off negative campaigning and ran on an optimistic promise to bring people together, and that leads to the problem with Betomania. He is running in 2020 the way Barack Obama ran in 2008. People wanted to fall in love with Obama, and they did. Hillary Clinton had the bigger resume, but nobody really falls in love with Hillary. People swooned for Obama, and some of them, a lot of them, want to swoon again.

But, the differences between the two men are stark. People who met Obama invariably came away saying that he was one of the smartest people they had ever met, someone who seemed to have an informed awareness of almost any issue and depth-of-policy chops that betrayed his youth and relative inexperience. With Beto, there is a suspicion that he is an airhead.

During his time in Congress, he became associated with only two major causes: immigration reform, which you would expect for a congressman from El Paso, and the legalization of marijuana. Watching him flail in answering even some basic questions, one wonders if his commitment to the latter cause does not represent a conflict of interest. That's a joke.

A candidate for the most powerful job in the world needs to be a bit better prepared when they launch. This headline in The Washington Post — "Beto O'Rourke's early campaign: Upbeat sentiments absent many specifics" — is potentially deadly, and there were other similar stories. Over time, the inability to discuss policy in depth will wear thin with voters, especially on a debate stage with someone like Sen. Elizabeth Warren whose grasp of policy is unprecedented, or Sanders and former Vice President Joe Biden, who have been at this a long time and know a thing or two about policy.

I actually think O'Rourke's bigger problem will be the "upbeat sentiments." Obama pledged to bring the country together, to heal the divides of race and class, to help the country move forward as one. But, then Sen. Mitch McConnell and his fellow Republicans decided they did not want to play ball, and Obama's presidency ended up being as divisive as, perhaps even more than, George W. Bush's. That was not Obama's fault, and it wouldn't be O'Rourke's. I just don't think Democratic primary voters feel like being snookered a second time with promises to unite the country when, at this moment in our history, it ain't going to happen.

As with Harris, the fear that O'Rourke is a "Davos Democrat" is something he will have to address. Here, too, the legacy of Obama looms large. He inherited a mess that was also a once-in-a-century opportunity to rewrite the rules of the economic road. Instead of shooting for 10 and being happy with seven, Obama and his economic team shot for five and got three. The Affordable Care Act was a huge success, but when Wall Street was prostrate, the appointment of Timothy Geithner as treasury secretary was a monumental mistake. Better to have left Bush's treasury secretary, Hank Paulson, in place. Paulson had the wherewithal to walk into Bear Stearns and lay down the law. Geithner, not so much.

In 2008, I let myself fall in love with Obama. I believed the magic. I teared up watching the "Yes, we can" video. I thought he would heal the divisions. A friend warned me: "Michael, do not fall in love with any politician." The psalmist warned us all: "Put not your trust in princes." I don't think I am alone in this, which means O'Rourke will need more than his happy-talk optimism, no matter how aspirational and inspiring, if he is to become a serious candidate. If this was a sprint, I would give him greater odds, but it is a marathon.

The problem is made worse because O'Rourke lets stories like this one at Politico about his minivan and his dad's pickup truck define his candidacy. A couple of years back, he and Republican Congressman Will Hurd rented a car together, drove from Texas to Washington, D.C., and live-streamed the trip. It became something of an internet sensation. But, really, who cares about what car he drives or that he stopped in Memphis for donuts?