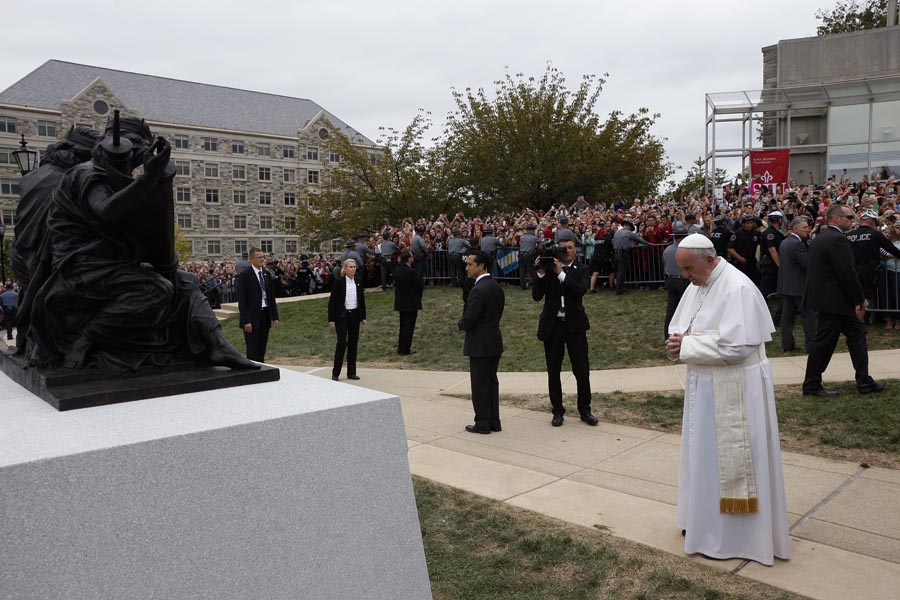 Pope Francis prays in front of a sculpture while making a brief stop at St. Joseph's University in Philadelphia Sept. 27, 2015. The sculpture commemorates the 1965 Second Council declaration "Nostra Aetate" and the foundation in 1967 of the Institute for Jewish-Catholic relations at the university. (CNS/Paul Haring)

Cessario's book review of Kidnapped by the Vatican? The Unpublished Memoirs of Edgardo Mortara, published at First Things and entitled "Non Possumus" is the work of a man to whom the instruction of future clergy and editing of articles about Christian thought cannot be entrusted. His essay is not only morally repugnant, although it is that in spades, it is intellectually deplorable as well and Cessario is smart enough to have known that he was being deplorable.

And, of course, this essay harms the church grievously and no amount of making excuses or paeans to freedom of thought can disguise that harm. Jews must be bewildered: Ever since Vatican II, even while some efforts were made to "reform the reform," on the issue of Nostra Aetate and the church's commitment to the Jews, no one in authority in the church, liberal or conservative, has thought back to the days of vibrant anti-Semitism as the good old days. Yes, this is one essay in a magazine with few readers, but it has been written about everywhere from the Forward to Haaretz.

Moreover, Cessario's essay and the essay by First Things' editor Rusty Reno published the next day reveal exactly what is so hateful, extremist and myopic about the thinking of so many conservative Catholics these days. Adhering to an a priori theological claim, and relentlessly applying that claim with a pretended logic, in utter indifference to the human realities and other divine teachings at issue, this is the hallmark of so much of the opposition to Pope Francis, is it not?

The case of Edgardo Mortara is well known. A young Jewish boy in Bologna, which was then part of the Papal States, took ill as a baby and, fearing for his eternal soul, his unschooled Christian nanny, Anna Morisi, secretly baptized him. A few years later, she informed the authorities she had baptized the child and, on June 23, 1858, those same authorities kidnapped the child from his family and took him to the Vatican, where he was raised as a ward of Pope Pius IX.

The kidnapping was denounced at the time and not only by anti-clerics in the Risorgimento movement. This is not a case of idiosyncratically rewriting history, of demanding we stop honoring Jefferson because he was a slave owner or ignoring the contributions of Wilson because he was a racist. People at the time knew the kidnapping was wrong. How could they not? Even the church recognized the fact that the natural family was ordained by God and is a positive good. In addition, and in case Cessario did not notice, a lot has happened since 1858 to the Jewish people and, as a consequence of the enormity of Christian complicity in the suffering perpetrated upon the Jews, the Catholic Church has come to understand just how evil Christian anti-Semitism is. Another Pope, St. Pope John Paul II, as a young priest, forbid the baptizing of Jewish children whose parents had been lost in the Shoah unless the parents had expressed such a desire.

Cessario does not let any of this give him pause. He opines:

The requirement that all legitimately baptized children receive a Catholic education was not arbitrary. Since baptism causes birth into new life in Christ, children require instruction about this form of new life. Furthermore, although the Italian Risorgimento had begun, the diplomatic world in 1858 still recognized Pius IX as both pope and prince in Bologna. While the pontiff displayed his human feelings by making Edgardo his ward, Pio Nono nonetheless felt duty-bound to uphold the civil law. This law was not unreasonable, moreover. Even today the Code of Canon Law, can. 794 Section 1, assigns to the Church the task of educating Catholics.

Later, Cessario writes, "Prior to the arrival of the papal gendarme at his parents; home, Edgardo Mortara was an anonymous Catholic. In his case, divine Providence kindly arranged for his being introduced into a regular Christian life." And, again later, "Except for the solicitude of Blessed Pope Pius IX, the Mortara child may never have learned of his baptism. The answer to these questions requires that one make a fundamental assertion about the indomitableness of the divine initiative. 'For the gifts and the call of God are irrevocable' (Rom. 11:29)."

Pio Nono may have "felt duty-bound to uphold the civil law" but Cessario surely knows that he was an absolute sovereign who could have changed the law if he wanted. And, whatever role Divine Providence played in this ugly episode, the child was kidnapped, not "introduced into a regular Christian life." The incident demonstrates the lack of, not the presence of, the "solicitude of Blessed Pope Pius IX." Finally, I agree with Cessario and with St. Paul – how can one not? – that "the gifts and the call of God are irrevocable" but does this not also apply to God's chosen people Israel?

In explaining why he allowed this ridiculous and offensive piece to be published, Reno gets personal, explaining that his wife and children are Jewish. I admit I chuckled when I read that his daughter told him not to worry about not being a Jew because the family dog was Episcopalian. Reno correctly describes some of Cessario's reasoning as "suspect." But, then he allows that perhaps Cessario is more astute about "spiritual challenges" because he is a priest, and frets about the church being "riven by debates about divorce, remarriage, and communion."

No, Mr. Reno, the Catholic Church is being riven by those like yourself and those whom you publish who apply to complex, even painful human realities a singular a priori theological principle to the exclusion of other theological principles. You and those you publish routinely adopt an obstinate, even boastful, indifference to the human realities about which those other theological principles seek to make sense in a specifically Christian way. In the case of "divorce, remarriage, and communion" that you mention, how many writers in your pages have noted "the words of Jesus Himself" forbidding divorce, while neglecting, for example, Jesus' words about leaving mother and father, wife and children, etc., or his words about the chances of a rich man getting into heaven. In short, your journal does repeatedly what you correctly complain Cessario has done here: make "suspect" claims based on a sectarian theological point.

Apart from the pages of Communio, no Catholic editorial venue has more insistently resisted the reduction of our Christian faith to ethics than "Distinctly Catholic." It is not enough that the kidnapping of Mortara was a moral enormity, although it was, as is Cessario's defense of it. No, Cessario is no champion of the mysterious ways of God. His whole argument is premised on certain Thomistic understandings of how grace must work. It is he and his legalistic ilk who have gotten into this mess of thinking we can determine with precision where God's grace goes and where it doesn't. Forgetting the words of the Master to Nicodemus: "The wind blows where it wishes, and you hear its sound, but you do not know where it comes from or where it goes. So it is with everyone who is born of the spirit." (John 3:8). Legalistic presumption, like moralism, strikes at God's omnipotence and freedom and in seeking to overcome the latter idol, Cessario makes offering to the former, but it is a false god too.

Others may object that on this subject my support for the Holy Father's emphasis on mercy is betrayed, that my Zionism has blinded me. I do not believe my commitment to a homeland for the Jewish people has blinded me to anything, but I plead guilty that on this subject, there is no room for mercy in the usual sense. I view the need for a zero tolerance policy towards anti-Semitism the exact same way I view the need for a zero tolerance policy towards clergy sex abuse, and for the same reason. If the authorities of the Catholic Church had not covered up clergy sex abuse all those years, perhaps they could be trusted to draw distinctions in punishment between someone who may have inappropriately touched a child as opposed to someone who raped a child. If the authorities of the Catholic Church were not so complicit in anti-Semitism, perhaps we could be similarly trusting in their ability to parse the different degrees of anti-Semitism. But, in both cases, the leaders of our church failed and now, in order to completely remove the cancers of clergy sex abuse and anti-Semitism, only a zero tolerance policy will do. I do not suggest he be kicked out of the Dominican order, nor thrown on the street. The need for a zero tolerance policy against anti-Semitism by clerics is not only punitive; it is an exercise in preventive medicine.

If you doubt that Cessario's views are in some way distorted by anti-Semitism, consider this. He writes, "Though the walls of the Jewish ghettoes had come down by that time [which is not really true], certain regulations still separated Christians and Jews. One of these forbade Christians from being employed in Jewish households, precisely in order to prevent situations like the one in which the family now found itself. The Mortaras had ignored this regulation." You see the difficulties? First, why does Cessario note that the Mortaras ignored the regulation, but is silent about the fact that their Christian nanny, Morisi, did as well? After all, the Mortaras, like most orthodox Jews, had a specifically religious reason for hiring a Christian maid: The maid could perform duties on the Sabbath they were prohibited from doing.

Dominican Fr. Romanus Cessario is one of the very few priests to whom I have written after hearing them preach a sermon that was so wonderful, I felt the need to write and thank them for it. I remember it well and, now, with irony. It was the Second Sunday of Advent, and it must have been a very long time ago, but I can still remember that Fr. Cessario took as the text for his sermon these words from the Prophet Baruch:

for God is leading Israel in joy
by the light of his glory,
with his mercy and justice for company.

I wish he had remembered that text. I wish he had remembered the full implications of his citation to St. Paul: God's gifts and call are irrevocable, and not only for Dominicans but for Jews, for the Mortaras. There was no mercy or justice keeping company with the Mortaras — or with the Church of Jesus Christ — on that night in 1858 when Edgardo was ripped away from his family. Only a failure to recognize the human dignity of our Jewish brothers and sisters can account for the crime then, or for Cessario's attempts to excuse it now.