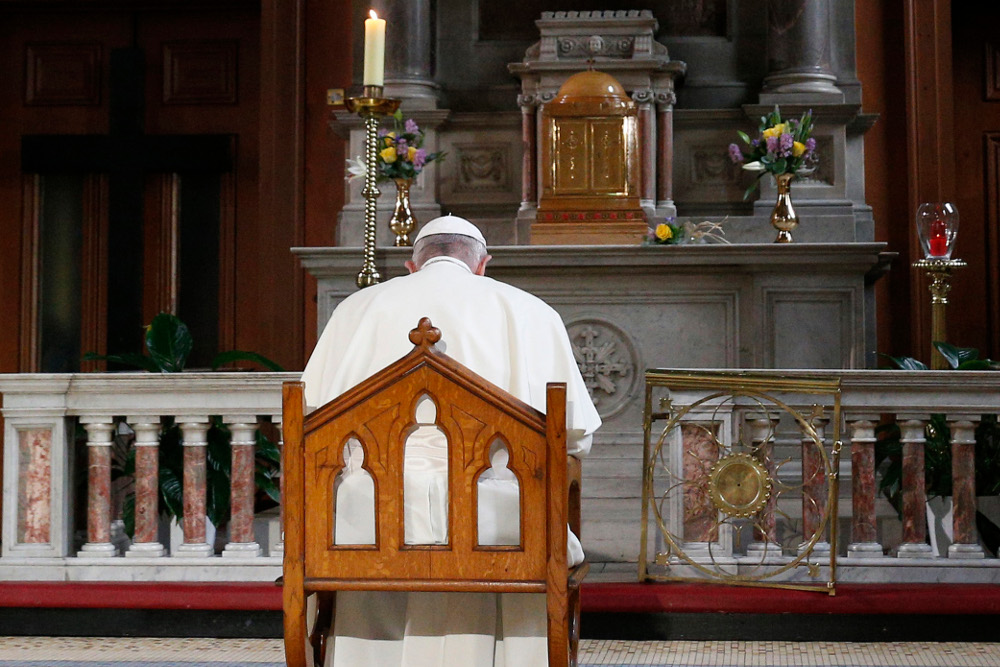 Pope Francis prays in front of a candle in memory of victims of sexual abuse as he visits St. Mary's Pro-Cathedral in Dublin Aug. 25, 2018. (CNS/Paul Haring)

The Vatican Curia moves slowly, as we say here in New England, "Like molasses in January running uphill in a blizzard." So it is quite remarkable that less than three months after the conclusion of the Vatican summit on clergy sex abuse in February, Pope Francis' new motu proprio, Vos estis lux mundi, establishes new laws for the universal church regarding both the scourge of abuse and the equally abhorrent covering up of such abuse.

" 'Vos estis lux mundi' is one of the 'concrete measures' Pope Francis mentioned as a result of the February conference," Boston Cardinal Sean O'Malley, chair of the papal commission on clergy sex abuse of minors, told NCR in an email. The first such concrete measure was the March motu proprio that made the reporting of abuse mandatory for all who work in the Vatican itself. Those standards are now extended to the universal church.

The first section of the document requires every diocese to establish protocols for reporting clergy sex abuse where they do not exist, and the protocols must be "public, accessible and reliable." There can be no way to scotch an inquiry because the accused is a good friend or an old seminary classmate. In addition, abuse of "vulnerable persons" is now to be treated with the same procedures as child abuse, as are cases of abuse of power, for example when a seminarian is violated, as abuse of a minor. If you are ordained, or belong to a religious order, you are now a mandatory reporter of abuse. You can't ignore it.

Francis has also indicated to the entire church, from the local bishops to the Vatican dicasteries, that they cannot tarry in dealing with allegations. Timelines are set for all involved. If a metropolitan informs the Vatican of an allegation against a bishop, the relevant dicastery must respond within 30 days. The investigator must file a report every 30 days and complete his investigation within 90 days. What that means as a practical matter is that allegations cannot be buried in a backlog of Curial work: Allegations go to the front of the line in the work of a dicastery, as it should be. Such timelines are unheard of in Vatican culture and represent Francis' commitment to really changing the culture of the church.

Another part of the document that I had not expected deals with the need to protect those who level an allegation of abuse or cover-up. They are protected from retaliation or discrimination and the text explicitly states that they cannot be prevented from speaking to their friends and family or to the public, provided they do not engage in calumny. The document notes that civil laws generally cover such issues. The motu proprio also entitles the victims to information about the resolution of their case. Remember that is one of the reasons Marie Collins cited for quitting the Child Protection Commission was that the Congregation for the Doctrine of the Faith refused to even acknowledge receipt of an allegation with a letter to the victims. Francis has clearly put the entire Curia on notice: Stop being inhumane.

Even more significant is the second section of the document which considers allegations against bishops and religious superiors.

"The apostolic constitution establishes new procedural norms for the investigation of crimes by bishops and supreme moderators of religious institutes," O'Malley pointed out. "There are different options for these investigations, but the first is that the metropolitan archbishop is mandated to investigate the alleged crime by a bishop or supreme moderator, whether it is an allegation of sexual abuse or cover-up of abuse."

Read that last sentence again: The cover-up of abuse is treated with the same degree of seriousness and in the same way as abuse itself. That is how you change the hierarchic culture that perpetuated this scandal. It must be reported just as sex abuse must be reported.

It is difficult to stress how important this is. Any attempt to interfere with an investigation — any obstruction of justice, as we would call it in our judicial system — is considered as a violation of the motu proprio. The episcopal conferences are granted different approaches that best suit their situations. The "metropolitan proposal" first proposed at last November's U.S. bishops' conference meeting, modified and significantly developed here, is the one most likely to be adopted because it builds on existing structures and it is in keeping with the ecclesiology of Vatican II. We will need to speak with some canonists in the days ahead to see exactly how today's proposal differs from earlier ones, but it is clear it is more comprehensive and is also cognizant of the need to avoid a conflict of interest, which some of the early metropolitan proposals did not address.

Whichever option is chosen, the involvement of lay people is encouraged but not required. This will disappoint many and I am not sure why lay involvement was not made mandatory. It could be that the Vatican is rightly spooked by American lay leaders of the Raymond Arroyo, Tim Busch, John Garvey and George Weigel variety, men who have glommed onto the issue as part of a more general critique of this papacy, and suiting proposals for reform to their ideological measurements.

There are some who will find today's reforms insufficient. For example, I expect some will complain that the document does not require allegations be reported to civil authorities, but only imposes reporting requirements under church law. Reporting requirements differ from state to state, let alone from country to country. As well, there is a lack of due process in some jurisdictions, and other countries where the situation of the church is so embattled, such a requirement could cause real harm to innocent people. A single approach, given this diversity of civil legal cultures, is not possible. But, the criticism will surely be made. The document does require church personnel to comply with whatever reporting requirements the civil law demands.

Still, even the usual naysayers have to be impressed by this document, by its sweeping nature, and by the speed with which it was produced and promulgated. Can this work? In one sense, it already did: The proposal for investigating a bishop outlined here is almost exactly what happened in the case of now-former cardinal Theodore McCarrick: The allegation came to the archdiocese of New York, which contacted the Vatican, which authorized the archdiocese to conduct an investigation, which was sent to Rome for adjudication.

The critics of Francis will no doubt refuse to be appeased. Those in the Vatican Curia who have complained "What about the rights of the bishops?" and who hate reform tooth and nail, they have been silenced by this document.

And, let us be clear: Since this scandal first emerged in the '80s, Pope John Paul II set the pattern for obfuscation and a lack of accountability. Pope Benedict XVI was much stronger on processing cases against clergy, but removing bishops for failure to protect children was a bridge too far for him. Francis, in this document, says what we at NCR have been saying for sometime: This crisis affects the entire church, it calls for a cultural change, ongoing vigilance, and increased transparency and accountability.

Is the fight over? Of course not. All this has to be implemented, foot-dragging must be confronted, episcopal conferences have protocols to establish, and Roman dicasteries have personnel to train. Still, this is no baby step forward. I had not anticipated the reforms announced this morning would be so sweeping. I am delighted that they are so.

A version of this story appeared in the May 31-June 13, 2019 print issue under the headline: New rules on abuse mark a major step forward.