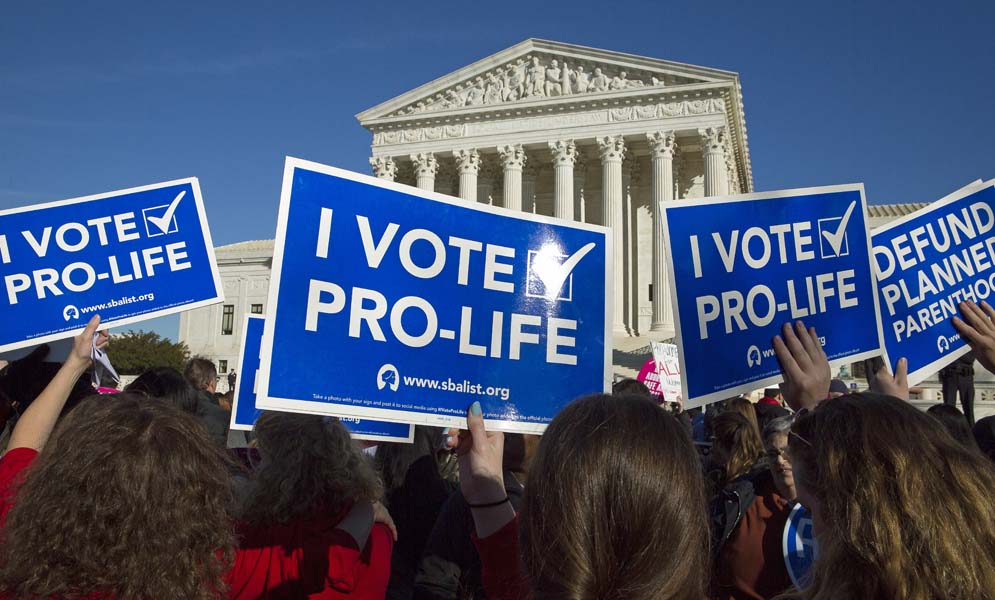 Pro-life advocates gather near the U.S. Supreme Court during the annual March for Life in Washington Jan. 19. (CNS/Tyler Orsburn)

Today is the 45th anniversary of the Supreme Court's Roe v. Wade decision. I despair at times that the legal issues surrounding abortion are destined to remain firmly in the hands of special interest groups on both sides of the issue, groups for whom compromise is unthinkable and every discussion is understood to be a zero-sum game. In the meantime, ours is one of the half a dozen countries that permit late-term abortions, not enough is done to help women facing crisis pregnancies, and the societal respect for human life declines every year.

Surprisingly, however, there have been three recent developments that suggest there is more fluidity in the political debate than I had anticipated, and one sign of how intractable that debate remains.

The first, and most obvious development, is that the president of the United States is a Republican who campaigned on an anti-abortion platform. Like previous GOP presidents, he addressed the Right to Life March in Washington via broadcast from the White House last Friday. Like previous GOP presidents, he reinstated the Mexico City Policy upon taking office, barring U.S. government aid to foreign nongovernmental organizations that perform or promote abortion as a method of family planning. Unlike previous GOP presidents, President Trump bragged about seducing women who were not his wife, indeed especially focusing on women who were the wives of other men and bragging in the most offensive and demeaning manner imaginable.

One of the achievements of the pro-life movement in recent years has been the recognition that we must demonstrate our commitment to women facing crisis pregnancies, that our movement must highlight the voices and experiences of women, and that without such a demonstrated respect for women, the movement is doomed to fail. To allow a misogynist to associate himself with the movement, let alone be seen as its political leader, is worse than counterproductive.

Just as Republicans who care deeply about foreign policy, or the rule of law, or the freedom of the press, or civility in politics, have been forced to ask themselves if being associated with this president is a liability so enormous that they and their causes will be irrevocably tarnished from that association, pro-life Republicans can ask themselves the same thing: Even if Trump does something that furthers the pro-life movement, is being associated with him too high a cost to pay? And, will that question, in turn, cause the pro-life movement's leaders to pose another question: Whether it was intelligent, morally or politically, to become an arm of one political party. 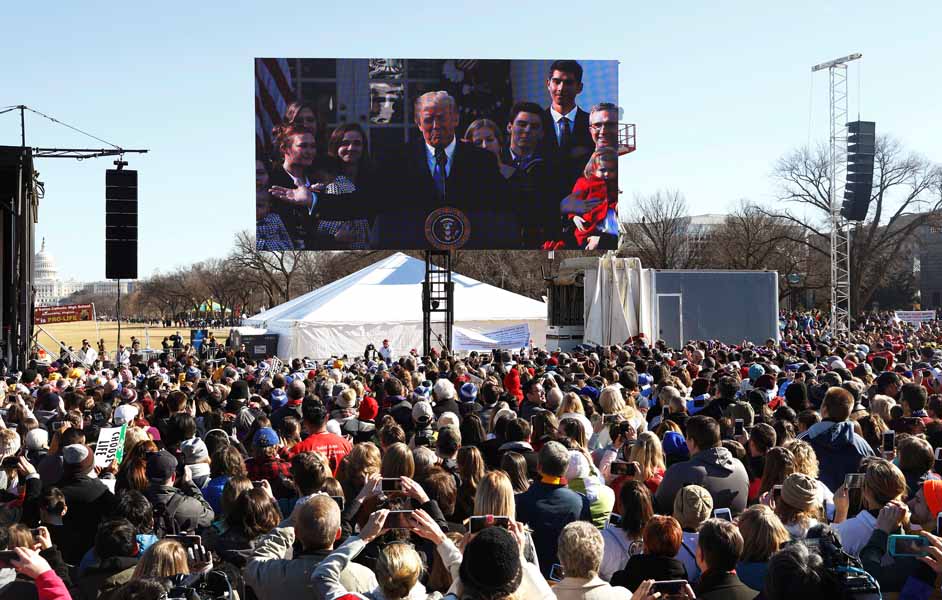 President Donald Trump is projected on a large video screen as he addresses attendees of the annual March for Life rally in Washington Jan. 19. The address took place from the Rose Garden at the White House. (CNS/Eric Thayer, Reuters)

The second development comes from the great state of Arkansas where Bishop Anthony Taylor announced he would preside at two Masses for Life, but not attend the annual Rally for Life at the state Capitol because the keynote speaker was Attorney General Leslie Rutledge. In a letter to his flock, Taylor said that while Rutledge had good anti-abortion credentials, "this last year [she] worked tirelessly to secure the execution of four criminals who posed no further threat to society. You will recall that the Diocese of Little Rock was very vocal in appealing for clemency for these four men, but we were opposed at every turn by Attorney General Rutledge. For this reason, I asked Arkansas Right to Life to choose a more appropriate keynote speaker, indicating that I could not participate in what was supposed to be a pro-life event otherwise. But Arkansas Right to Life has refused to do so. You are certainly still free to participate, but this is the reason we are not promoting the Rally for Life at the State Capitol this year."

Taylor went on to state, "As you know, the Church teaches a consistent ethic of life in which human life and human dignity must be protected from the first moment of conception to natural death and every stage in between. This means, among other things, that all lives have inherent God-given dignity. Even people who have been sentenced to death possess this dignity, which is why capital punishment must be abolished." Bravo Bishop Taylor! Finally, someone in authority says it is not enough to be concerned about the unborn if you want to wear the pro-life mantle!

The third development came last week at a meeting of the City Council in Chicago. At issue was whether or not to extend a tax subsidy to Presence Health Care, a Catholic health care network. Some aldermen opposed extending the tax subsidy because the health care provider does not perform abortions, even though Presence has promised to build and maintain four community health centers in poor, underserved areas of the city.

One lesbian alderman said she was opposing the subsidy because she and her partner might be denied health care services at a Catholic hospital. This is nonsense, and worse than nonsense. A gay alderman reminded the group that during the AIDS epidemic, it was St. Joseph's Hospital that first stepped up to offer care, regardless of patients' ability to pay. An African-American alderman said that in her ward, which would be served by one of the Presence community centers, her constituents were not complaining about access to abortion services: They needed cancer screenings of the kind the community health center would offer. Another alderman noted that many of the phone calls urging the council to vote against the Catholic health care provider came from outside the city. In the end, the council voted to award the subsidy.

Then, a curious thing happened. Mayor Rahm Emanuel, who is devotedly pro-choice, took the microphone and lectured the council on how unfair they were being, on how Catholic health care providers had long been essential to the mosaic of services offered in the city, reminded them that before the Affordable Care Act, passage of which he oversaw as White House Chief of Staff, Catholic health care services took care of a disproportionate amount of care for the poor and indigent — and still do! The consummate politician reminded the council that making abortion a litmus test was bad policy and bad politics.

Will Democrats stare down the effort to make theirs a univocal party in favor of abortion rights? Will Democrats come round to asking why on this issue, and this issue only, they are such libertarians?

This will require that pro-choice Catholics become more morally serious in their thinking. Here at , last month we published an article by Sen. Tim Kaine of Virginia. Parts of that essay were surprising, such as revealing that he and his wife have practiced natural family planning and endured long periods of abstinence. Indeed, in explaining how he and his wife have lived their lives, it is clear that Kaine is a mensch.

But, part of his essay was also disappointing and predictable. Sen. Kaine states, "In short, I believe Catholics should follow church teaching on the sanctity of life. And I also believe that Catholic values can be helpful to all. But enshrining Catholic teaching on contraception and abortion as law for all women, regardless of their faith or ethical background, goes too far." But, he also writes that his commitment to the Catholic Church's teaching on the sanctity of life "has meant longtime public advocacy, together with my wife, for better adoption and foster care policies, for services to the poor and immigrants and disabled, for the advance of children, for good health care for all." Why is it permitted for Catholic values to inform these political stances, but to stop short of informing his stance on laws that protect unborn human life?

A son of the commonwealth of Virginia, with its long tradition of commitment to democracy, Kaine can also only invoke democratic theory to a degree. He may say that his constituents are pro-choice on balance and, as their representative, he must honor their policy preferences. But, there is nothing in democratic theory that requires Kaine to muzzle himself. Quite the contrary. If he really believes what the church teaches about the beginning of human life, is he not obligated to try and persuade others of the truth of that view? Did I miss that speech?

So, perhaps there is more flux in the debate than I thought, perhaps not. What should be clear is that Catholic progressives do themselves no favors when they downplay opposition to abortion as the infamy the Second Vatican Council said it was. The inconsistency of standing with the undocumented, the uneducated, and the unemployed and all those defined by what they lack, by what they are excluded from, but not with the unborn is a glaring inconsistency. In many states, the votes of Catholic progressives are essential to the Democratic majority. The age of Donald Trump is no time to sell our votes short. Put differently, if Rahm Emanuel is willing to stand up for us, why should we not learn to stand up for ourselves?