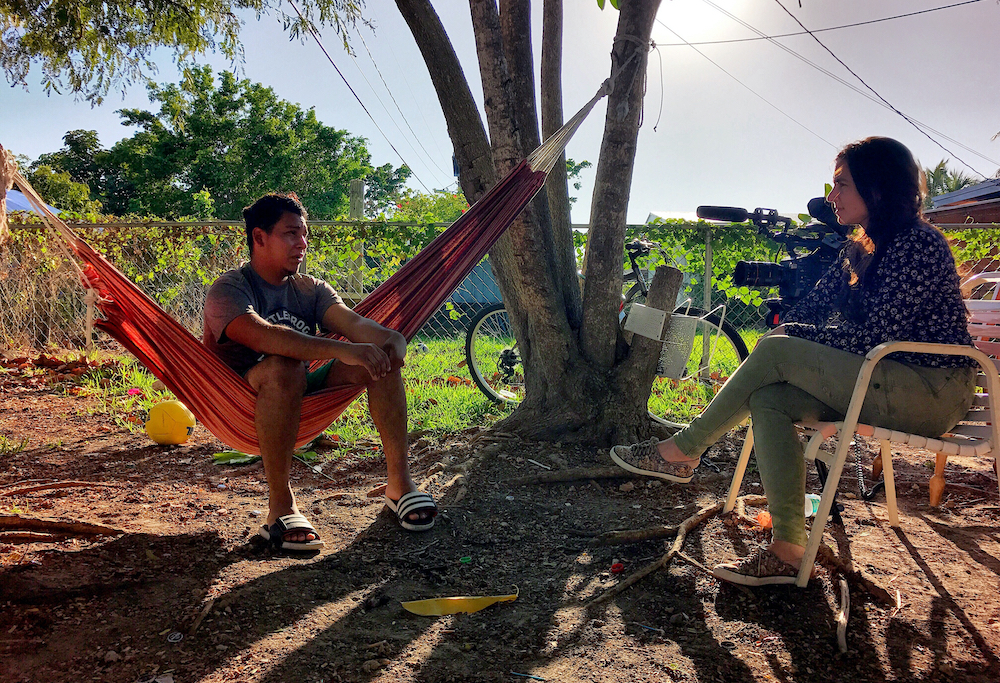 Alexandra Codina, director and producer of "Paper Children," right, talks to Fernando, one of the four children who sought asylum in the U.S. from Honduras. (Cinemia)

The scenes are of a close-knit family in Homestead, Florida, going about their everyday lives — at their jobs, preparing dinner, caring for the dogs, praying with church members, cheering and laughing at a soccer match. The jarring part is that sometimes the dialogue accompanying the everyday activities is of children talking about the murders of cousins in their home country of Honduras, and their flight north amid threats of rape and murder.

Codina's film, available via YouTube Originals, is a finely detailed portrait of the family — never identified by surname, just their first names — as the four children go through the process of seeking asylum. She spent four years regularly checking in with the family and three years actively filming their home life, visits with their attorney and individually interviewing Fernando, China, Jan, Mauricio and their mother, Karen. Their father, Celio, was too shy to speak on camera, but he is a steady presence in the scenes of family life.

In one scene, China discloses being targeted by gang members. "As soon as you have a woman's body they come," she said matter-of-factly, giving a rueful little smile before turning back to washing a bowlful of chicken pieces for dinner. The eldest brother, Fernando, describes his youngest brother, Jan, crying during their entire 12-day journey to the United States and of the foursome barely speaking for days, hoping to avoid detection as they passed through gang territories in Guatemala and Mexico.

Gradually, the film reveals how the family came to be in two countries — the parents in the United States, the children left in the care of relatives in Honduras — and the unexpected intrusion of violent gangs into their previously quiet community. Four years after their parents left to make a better living for the family in the United States, Fernando, then 16, was worn out by trying to meet extortion demands and fearful of threatened violence. He and his siblings set out for the U.S. border. There, they quickly were apprehended by Border Patrol agents and detained in what Jan called the "dog cages" and the "icebox," the notoriously sparse and frigid detention settings used by the Border Patrol. Codina pieces together bits of conversations as the siblings and their mother reveal their challenges in survival and keeping the family together.

When Codina learned about the 2014 influx of thousands of unaccompanied minors from Central America arriving at the U.S. border with Mexico, she set out to make a film that would show just what it takes today to get asylum for children who fled gang violence and other trauma.

At the time, the younger of Codina's two sons was a baby and she felt a strong pull to want to understand and tell the story of family separations.

"How can someone even argue that children should be left where they are being targeted by vicious gangs?" she asked.

Codina's interest in documenting the stories of children seeking asylum began with her own father's history. He came to the United States from Cuba in the 1960s in what was known as Operation Pedro Pan, under decidedly more welcoming circumstances. The operation, shepherded by then-Fr. Bryan O. Walsh of the Catholic Welfare Bureau, predecessor of Catholic Charities of the Miami Archdiocese, transferred 14,000 Cuban children to Florida and beyond as the Fidel Castro government came to power. They were placed in group homes, foster care and eventually reunited with parents or other family members. 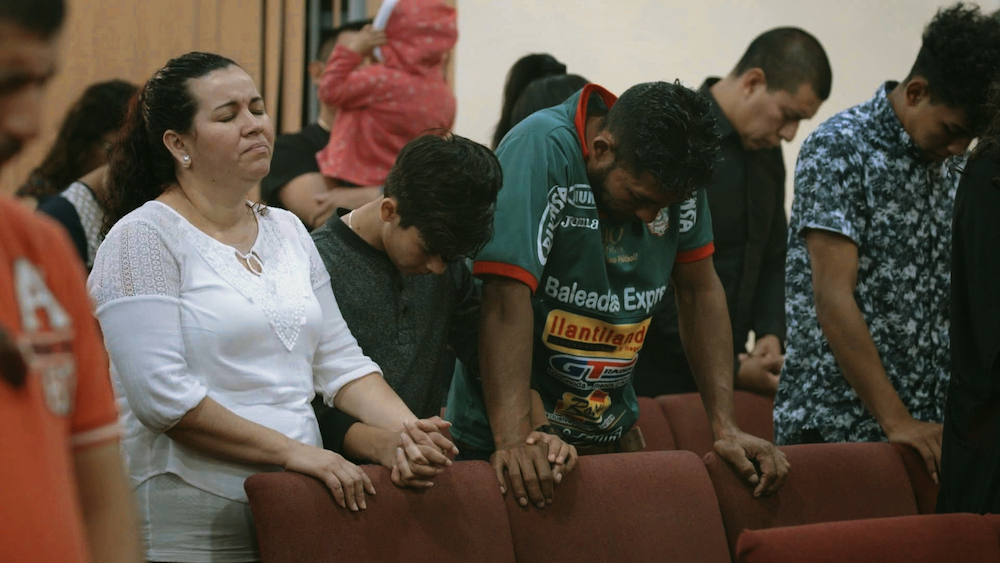 Scene from "Paper Children," of the family at church (Cinemia)

"It's important to address the idea that there's 'a line' to get in," she said. "There isn't. It is perfectly legal to appear at the border and ask for asylum."

In a previous job as programmer and outreach manager for the Miami Film Festival, Codina had become acquainted with the work of organizations including Americans for Immigrant Justice, a nonprofit law firm, and had become friends with Gracia Cuzzi, an immigration attorney for Catholic Legal Services of the Miami Archdiocese.

She originally set out to tell the stories of a cross-section of child asylum seekers. But when Cuzzi told her about the Honduran family, Codina reworked her plan to focus on how four children from the same household are treated in the U.S. asylum process. Each sibling had an individual application, despite their shared history. The hour-long film follows the often years-long process of hearings, interviews with asylum adjudicators, repeated delays and rescheduled hearings.

The nationwide shutdowns during the coronavirus pandemic meant asylum hearings are among the immigration proceedings that have been suspended, except for immigrants who are detained by Immigration and Customs Enforcement. As of June 2020, immigration courts had a backlog of 1.2 million cases.

"It's very hard for people to feel safe, to carry on with life with cases pending," Codina said.

That's just one of the messages viewers take from her film. She hopes it engages people beyond politics, for another.

"We've done so much damage to the asylum system, for years," she said. "There's been a slow chipping away at asylum well before the recent slowdown in processing." Her film notes that in 2019, 71% of asylum applications were denied. In the Miami immigration court, the denial rate is 92%. 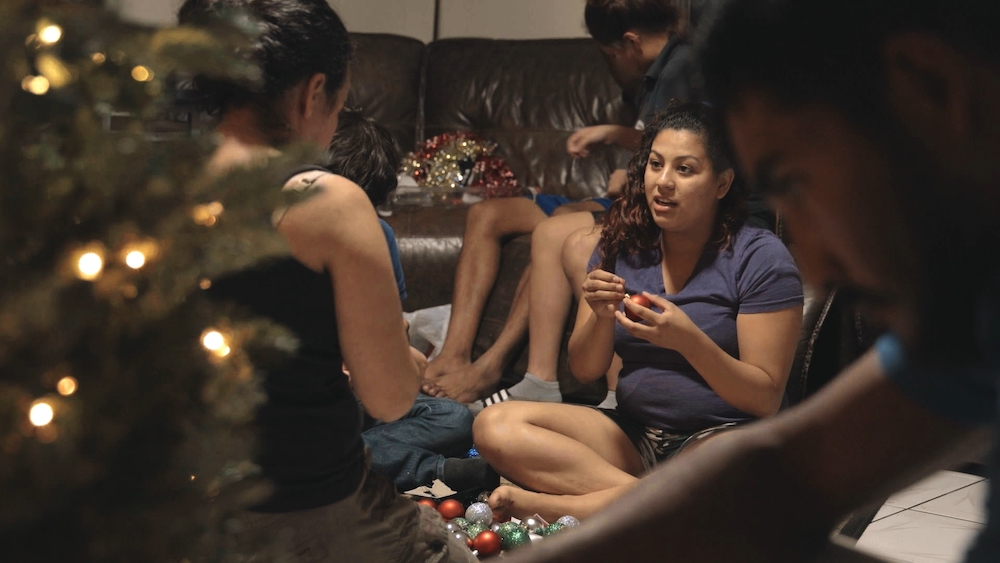 "Paper Children" is Codina's second documentary, following "Monica & David," her look at a couple (one of them her cousin) with Down syndrome as they decide to get married. "Monica and David" won Best Documentary Film Feature at the 2010 Tribeca Film Festival and had "quite the ride" for a first-time film, she said.

There were big plans for "Paper Children" to launch with great fanfare as well.

Days before theaters closed and large gatherings were banned, "Paper Children" had a premiere screening in Miami, attended by the whole family she featured. "It was a magical night," she said.

"Buzz was building beautifully," Codina added. But everything scheduled after that premiere has had to be canceled or turned into online events due to pandemic shutdowns.

Instead of being rolled out in a cycle of film festivals as planned, "Paper Children" can be seen for free on YouTube. A series of online programs about the issues raised by the documentary is planned for the fall. On Aug. 19 an online watch party will be followed by a discussion with experts on child psychology, immigration law and protecting children. The public event begins at 8 p.m. Eastern. Go here to sign up and learn more.

[Patricia Zapor is a freelance writer who covered federal government for more than two decades and has extensive experience on the topic of immigration.]