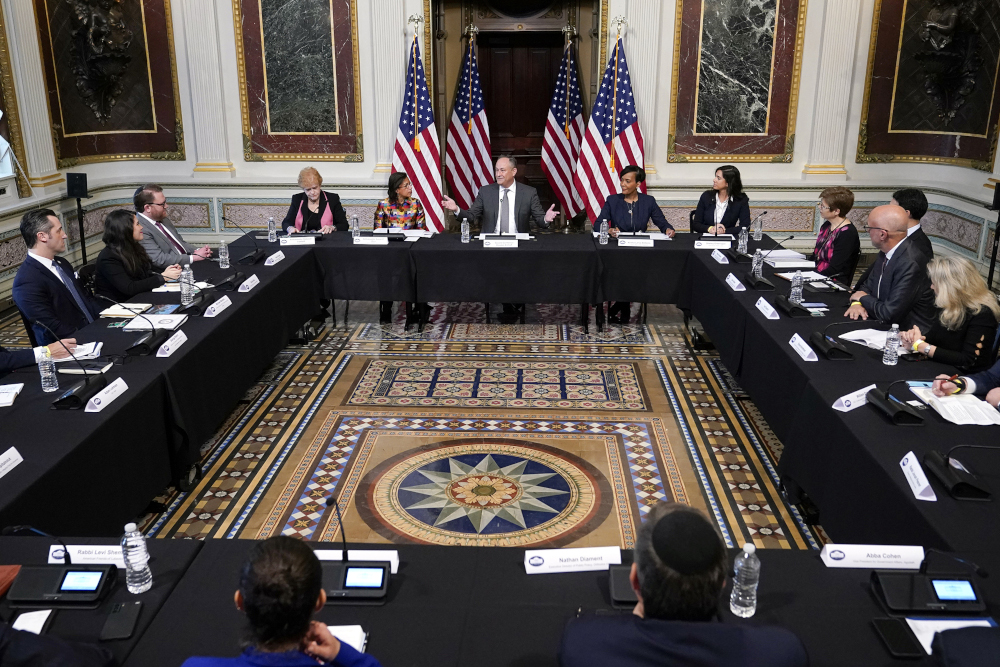 Doug Emhoff, center, the husband of Vice President Kamala Harris, speaks during a roundtable discussion with Jewish leaders about the rise in antisemitism and efforts to fight hate in the United States in the Indian Treaty Room in the Eisenhower Executive Office Building on the White House Campus in Washington Dec. 7, 2022. (AP Photo/Patrick Semansky)

Second gentleman Doug Emhoff opened a White House roundtable on antisemitism Dec. 7 by declaring his steadfast commitment to his Jewish identity and to fighting the scourge of hatred toward Jews.

“This is just the beginning of this conversation,” Emhoff said in prepared remarks before the closed-door meeting. “And as long as I have this microphone, I am going to speak out against hate, bigotry and lies.”

The roundtable follows a rash of public antisemitic statements from celebrity artists and athletes, and a dinner at Donald Trump’s Florida club and residence at which the former president met with the rapper Ye (formerly Kanye West) and white Christian nationalist Nick Fuentes, both of whom have spoken adoringly of Adolf Hitler and the Nazis.

A dozen Jewish leaders attended the 90-minute meeting in the Eisenhower Executive Office Building next to the White House. It was described as a kind of listening session at which ideas for combating antisemitism were discussed.

“There was continued concern for safety at synagogues and for Orthodox Jews who are sometimes subject to attacks, and a desire to empower law enforcement and fund them better to tackle these issues,” said Rabbi Jacob Blumenthal, chief executive of the United Synagogue of Conservative Judaism and of its Rabbinical Assembly.
Biden did not attend the meeting but has condemned antisemitism and recently tweeted: “I just want to make a few things clear: The Holocaust happened. Hitler was a demonic figure. And instead of giving it a platform, our political leaders should be calling out and rejecting antisemitism wherever it hides. Silence is complicity.”

In September, he convened a White House summit to address the threat extremism poses to various communities.

Securing support for the Nonprofit Security Grant Program, which provides funding for physical security enhancements at places of worship and other nonprofits. The administration has supported an increase from $250 million to $360 million for the program.
Adding resources and support for community policing in Jewish neighborhoods. Nathan Diament, executive director for public policy for the Orthodox Union, spoke of a need to better equip police to prevent attacks such as those on Orthodox Jews wearing traditional clothing associated with the Jewish faith.
Supporting the creation of an interagency task force to combat antisemitism as proposed in a Dec. 5 letter by Sens. Jacky Rosen and Jim Lankford, co-chairs of the Senate and House Bipartisan Task Forces for Combating Antisemitism. Such a task force might encourage a unified national strategy on antisemitism at various government offices.

“The commitment to having Jewish students at the table was fantastic,” said Jassey, a student at the University of Chicago.

Those attending the meeting said administration officials heard what they had to say and appeared committed to taking action.

“This is a troubling and fraught time and here you have senior officials at the highest levels of government addressing this very explicitly,” Diament said. “The antisemites are not given aid and comfort at the White House. That’s very important and ought not be minimized.”