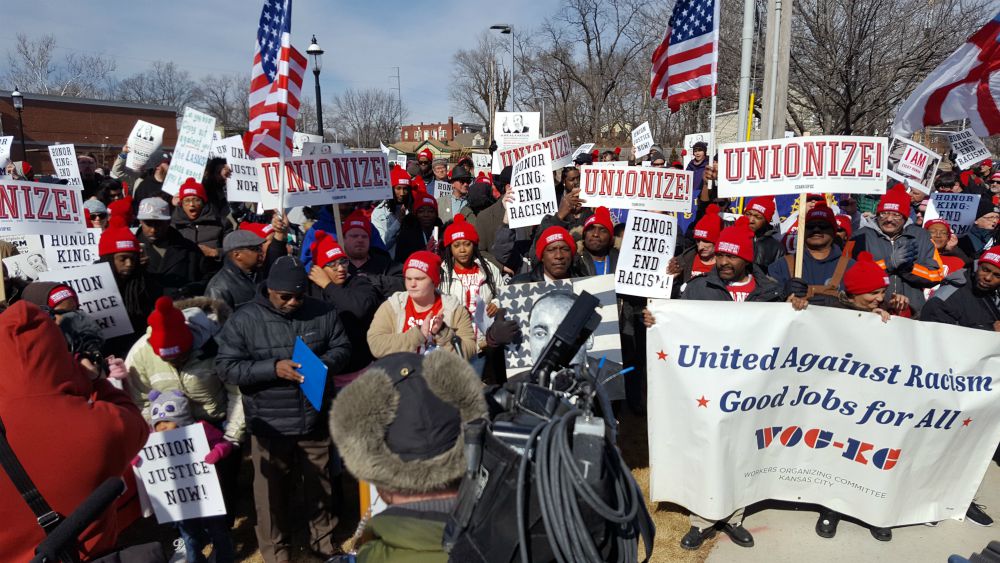 Approximately 100 fast-food and low-wage workers and their supporters in the Fight for $15 campaign marched outside of a McDonald's restaurant on Emanuel Cleaver II Boulevard in Kansas City, Missouri, in remembrance of the Memphis sanitation strike. (NCR/Brian Roewe)

Fifty years after a historic strike by sanitation workers in Memphis, Tennessee, two social justice movements joined forces Monday through a series of nationwide rallies in renewing a broad-based push for racial and economic justice begun by the Rev. Martin Luther King Jr.

At a noontime rally here, approximately 100 fast-food and low-wage workers and their supporters in the Fight for $15 campaign marched outside of a McDonald's restaurant on Emanuel Cleaver II Boulevard in remembrance of the Memphis sanitation strike. The strike, begun by nine workers Feb. 12, 1968, after two co-workers died on the job, drew the iconic civil rights leader King to their cause and to the city where he would be killed.

The commemorative demonstration was one of more than 30 across the country, with fast-food workers across the Mid-South going on strike for the day. Together, the actions also served as an official kick-off in uniting the Fight for $15 movement — which since 2012 has seen low-wage workers across numerous industries hold nationwide protests in a push for a $15 hourly wage and the right to unionize — with the revitalization of another of King's final projects, the Poor People's Campaign.

Led by the Rev. William Barber of North Carolina, and the Rev. Liz Theoharis of New York, the rebooted Poor People's Campaign, subtitled "A National Call to Moral Revival," will in May — on Mother's Day — launch six weeks of direct action and nonviolent civil disobedience in an effort to address issues of racism, poverty, militarism and ecological destruction.

"Both of our movements will do whatever it takes to ensure everyone has a living wage, a strong union and the right to organize for their rights so we can unrig America's broken politics and lift people of all races out of poverty," Barber and Theoharris wrote in an op-ed for CNN.com.

Speaking at the Kansas City rally, the Rev. Rodney Williams, president of the local chapter of the National Association for the Advancement of Colored People, called it "an historical day in America, because we are at the start of the biggest wave of protests that we have seen yet."

"Some people are under the false impression that this movement is only about low-wage workers. But this movement is also about the saving of the soul of America," said Williams, a pastor at Swope Parkway United Christian Church and a leader with Missouri Faith Voices.

"America is in the midst of a moral crisis, and this movement — that is made up of blacks, whites, Latinos, native-borns, gays, straights, Muslims, immigrants, the faith community, the labor community and the civil rights community — is the moral compass that this nation needs at this time," he said.

The new Poor People's Campaign comes as the federal minimum wage has remained at $7.25 an hour since 2009. Twenty-nine states set a minimum wage above the federal rate, including Arizona, Colorado, Maine and Washington — all of which voted in 2016 to raise the minimum to at least $12 an hour by 2020 — and California and New York, which plan to incrementally raise their minimum wages to $15 an hour by 2020.

At the same time, 27 states have passed laws requiring cities and counties to hold to the state minimum, most recently in Missouri, where the law negated wage increases above the $7.85 state rate in Kansas City and St. Louis. The state, under Gov. Eric Greitens, has also sought to become the 28th to pass "right to work" legislation, which allows individuals to opt out of paying union dues, though a labor-driven petition has put the law's fate on the 2018 mid-term ballot.

According to a 2017 Pew Research Center analysis, about roughly 20.6 million adult hourly workers are classified as "near-minimum" workers — making more than their state minimum wage but less than $10.10 per hour, a rate proposed by legislators in Congress in recent years. While January 2018 saw wage growth up 2.9 percent from a year before, the largest income gains in recent decades have been concentrated among the nation's wealthiest.

The purpose of the 1968 Poor People's Campaign was to raise issues of poverty in the American consciousness and wed economic justice to racial justice, said Clarence Lang, chair of the department of African and African-American Studies at the University of Kansas.

Lang, who spoke at the Kansas City rally, told NCR that King believed that "if people did not have jobs at decent wages with dignity, then that took the foundation from beneath all of these other rights" for which he had fought, such as the right to vote, for public accommodations and the basic rights of citizenship.

In December 1967, King publicly announced the Poor People's Campaign, describing it as "a trek to the nation's capital by suffering and outraged citizens who will go to stay until some definite and positive action is taken to provide jobs and income for the poor."

The campaign, led by Ralph Abernathy after King's death, mobilized thousands of people to converge on the nation's capital, led by Coretta Scott King and other women on Mother's Day 1968. There, they set up a temporary shanty town called "Resurrection City" where the protesters lived for more than a month and staged demonstrations for economic justice.

As Martin Luther King and other leaders in the Southern Christian Leadership Conference were in the midst of planning the campaign, King left to stand with the sanitation workers in Memphis, believing their cause exemplary of the broader Poor People's Campaign. It was in Memphis on April 4, 1968, where the civil rights leader was assassinated.

"Today we remember the struggle of garbage workers who simply wanted dignity and a living wage, freedom in a racist society, and to exercise their vote as free men," the Protestant minister Barber, who built the Moral Mondays movement, said in a statement.

He continued: "As we remember them, the only way we can pay homage is to say: Racism is garbage. Sexism is garbage. Mistreating women is garbage. Not paying people a living wage is garbage. Trying to undermine union rights is garbage. It is time for a movement in America that will take out the garbage and replace it with a new community, new understanding, new fairness, new equality and new wages."

Speakers at the Kansas City rally reflected on the sanitation strike and the similarities of their protests of meager pay, unsafe conditions and racist policies. At one point, a speaker commented "Sounds a lot like us, right?" to affirmative cheers. 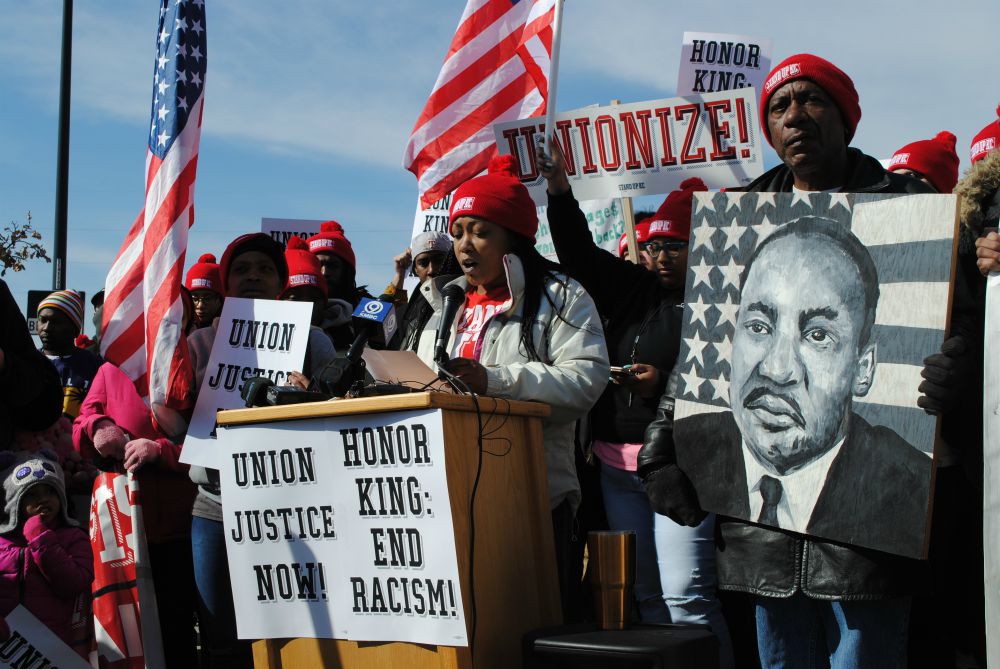 Latifah Trezvant works at a McDonald's restaurant and has been involved with the Fight for $15 for four years. (NCR/James Dearie)

"I live in the richest country in the world, I work hard, but I can't remember the last time I've been to the dentist. Is that right?" said Latifah Trezvant, a McDonald's worker who has been involved with the Fight for $15 for four years.*
She told NCR that she loves her job, but "I want to make my job a better job," which would include adding health benefits. When approached by people questioning why a fast food worker should earn as much as $15 an hour, Trezvant said she tells them that anyone working in America deserves a living wage.

"I go to work and I work hard every day, just like the next person, regardless of what I do," she said.

Eric Garbison, a Presbyterian minister who runs the Cherith Brook Catholic Worker house in northeast Kansas City, said he often finds himself affirming their homeless and other guests that they deserve things they've long been told they're not worth, such as living wage or health care. Around 10 of the people served by the Catholic Worker community joined Monday's rally, which has really "inspired" them, Garbison told NCR, "because this has touched their lives the most."

Connecting their cause to that of the sanitation workers was special, Trezvant added, in that "they made history 50 years ago, we're making history today and we're fighting for change."

Lang, the KU professor, reminded the workers and their supporters that many of the labor reforms in the U.S. have been led by the working class. With that in mind, he said, they cannot simply commemorate the work for civil rights of those of the past, but rather use it "as a way of empowering our work today that all of us have to do."

*This story has been updated to include a sentence accidently omitted from the original post.