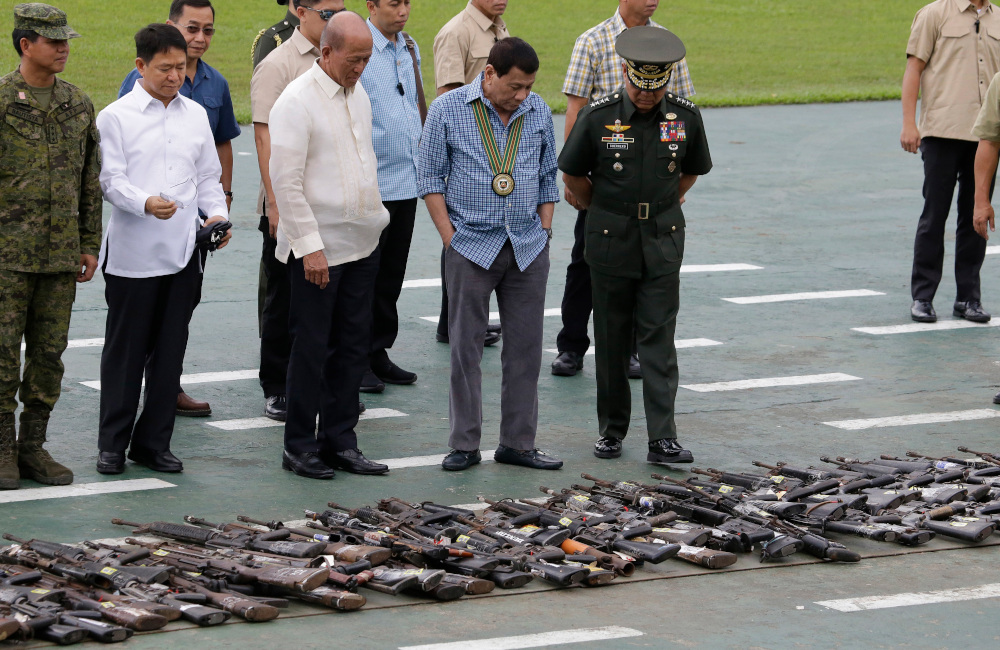 In this Dec. 13, 2018, file photo, Philippine President Rodrigo Duterte, center, looks at hundreds of guns and weapons confiscated during a pro-Islamic State group siege in Marawi, southern Philippines, at the Philippine Army Headquarters in Manila, Philippines. Duterte decided to end martial law in the southern Philippines after more than two years after government forces weakened Islamic militant groups considerably with the capture and killing of their leaders, his spokesman said Tuesday, Dec. 10, 2019. (AP/Aaron Favila, File)

President Rodrigo Duterte has decided to end more than two years of martial law in the southern Philippines after government forces weakened Islamic militant groups there with the capture and killing of their leaders, his spokesman said Tuesday.

Duterte placed the Mindanao region under martial law after hundreds of local militants aligned with the Islamic State group and backed by foreign fighters occupied buildings, a commercial district and communities in Marawi city starting May 23, 2017, in the worst security crisis Duterte has faced.

Troops quelled the disastrous siege after five months of intense airstrikes and ground offensives with the help of American and Australian surveillance aircraft. The Philippine Congress approved an extension of martial law in Mindanao three times after Duterte warned that militants continued to recruit fighters and plot attacks.

Duterte decided not to further extend martial law, which expires at the end of the year, after his defense and security advisers provided an assessment that "the terrorist and extremist rebellion" has been weakened with the losses of the militants' leaders and a drop in crime in the region, presidential spokesman Salvador Panelo said.

"The (presidential) palace is confident on the capability of our security forces in maintaining the peace and security of Mindanao without extending martial law," Panelo said in a statement. "The people of Mindanao are assured that any incipient major threat in the region would be nipped in the bud."

The military welcomed Duterte's decision to follow its recommendation to end martial law in the south. It added that the military will pursue amendments to an anti-terrorism law to lessen restrictions on government forces and make it more potent in countering terrorism.

Defense Secretary Delfin Lorenzana has told Duterte that Muslim militants can no longer carry out an attack like the siege on Marawi, which left more than 1,000 people dead, mostly militants, and turned the mosque-studded city's commercial and residential areas into a wasteland of burned and pock-marked buildings and houses.

Troops have also made significant progress in efforts to defeat the decades-old communist insurgency in the region, Lorenzana said.

The Marawi attack reinforced fears that the Islamic State group was gaining a foothold in Southeast Asia despite its battle defeats in Iraq and Syria.

Opposition politicians argued Duterte's martial law was unconstitutional because it is an "extreme measure" that can only be imposed when an actual rebellion against the government exists. They also feared the move could be a prelude to Duterte declaring martial law throughout the Philippines.

Foreign governments have also expressed concern, but Lorenzana said the martial law imposed in Mindanao was "mild" compared to the martial rule declared by authoritarian leader Ferdinand Marcos in the Philippines in the 1970s. The Marcos-era martial law was characterized by widespread human rights violations and alleged plunder of state coffers.

Lorenzana said businesspeople were reluctant to invest in the south because of martial law.

Suicide bombings by Islamic State group-linked militants have rocked the southern province of Sulu this year, including the first one staged by a Filipino militant, but Lorenzana expressed confidence that government forces "can maintain the peace and order there and improve it further, make it more peaceful, without martial law."