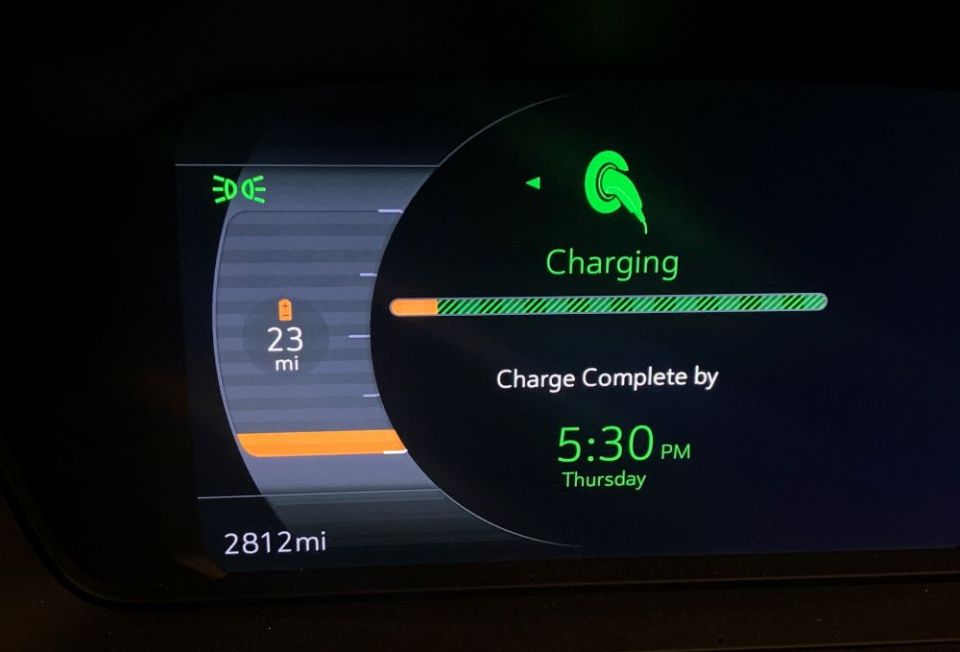 Relying on regular household power to recharge an electric car can take a while, in this case three days. (NCR photo/Bill Mitchell)

The GPS predicted we'd cover the 374 miles between Boston and Lewisburg, Pennsylvania, in six hours. It took us 10.

Those four extra hours — plus another four on the return trip — tell a couple of stories.

One recounts the stops and starts of long day trips without a drop of gas in the tank. The other, more of a surprise, shines a light on the bigger picture of the country's transition to electric vehicles. Together, they provide a few lessons for anyone considering making the switch to an EV.

A year ago, we had no clue we'd be participants in an evolution that automakers say could result in as much as 50% of the U.S. new car market going electric by 2030.

Until July, we lived close enough to public transit — in an apartment building with no parking — that we did not need a car. But then we moved to a less transit-friendly neighborhood, prompting our purchase of a new, fully electric Chevrolet Bolt EUV.

With transportation the biggest contributor to greenhouse gas emissions in this country and individual gas-powered cars releasing an average of 4.6 metric tons of carbon dioxide each year, joining the ranks of EV owners seemed like a small step in the right direction.

Around town, our new EV has been a source of fun and reliable transportation. Among other things, we've enjoyed how much peppier EVs can be than ICE (internal combustion engine) cars. And we like the routine (and increased battery power) of one-pedal driving — coming to a stop simply by removing our foot from the accelerator as opposed to applying the brake.

Instead of a gas gauge, EV dashboards show an expected mileage range, as well as maximum and minimum estimates. With easy, relatively fast charging with a 240-volt outlet in our garage, topping off the tank for local driving has not been a problem.

Until last week, our only out-of-state journey was a 220-mile round trip, on a warm Saturday in early September, to our friends' 50th anniversary party in New Hampshire. With one eye on the gauge, we managed to roll back into our driveway at day's end without having stopped to recharge — and with a few dozen miles to spare on the battery. 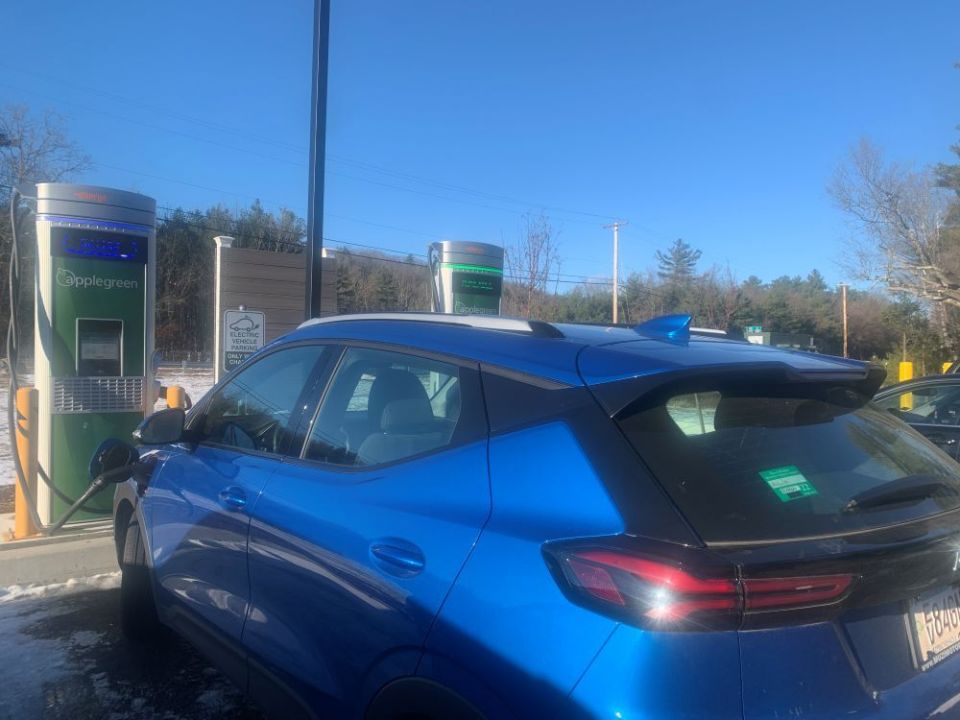 Connecting to charging stations along the road can be iffy at times. This one required a call to a helpline. (NCR photo/Bill Mitchell)

Nearly three months after that first trip, the mercury was hovering around freezing when we set off for a Thanksgiving visit to our daughter and family in Pennsylvania.

It didn't take long for us to realize that the cold was making some significant cuts in the electronic version of MPG — our MPGe (miles per gallon of gasoline equivalent).

We learned subsequently about studies showing how much range an EV can lose as a result of cold weather, aggravated even more by use of the car's heater.

On our most recent trip, with miles ticking off the gauge faster than expected, we were glad we'd planned a recharging stop in Danbury, the Connecticut city perhaps best known to NCR readers for the federal prison where  the late Jesuit Fr. Daniel Berrigan was incarcerated for 18 months between 1970 and 1972 for destroying draft records.

Our mileage balance of 75 as we approached the Danbury charging station was about 18% less than it might have been in warmer weather, a bit worrisome since serious battery problems have prompted GM to caution Bolt drivers to keep their mileage balance above 70.

For $17.87, we used the EVgo iPhone app to plug in for an hour and buy about 37 kilowatt hours (KWh) of electricity, enough to add about 140 miles to the tank.

With about 220 miles still to go to Lewisburg and the chilly temps cutting into our range, we clearly needed more juice.

Because EVgo limits users to a one-hour charge or 80% of their range — whichever comes first — we had to set up a new session. We added an extra 8.4 KWh — about 30 miles in warmer weather. But in the cold?

And there was one more variable to consider.

Just as the cold diminishes battery power, so does speed. So for the next several hours, we set the cruise control to 55. In the process, we noticed not only how much more slowly the miles ticked off the gauge but what it's like to watch the rest of the freeway speed on by.

Although not a lead foot, I generally keep up with traffic. This was something different, consciously limiting our speed in the interest of extending our distance. Similar dynamics are also in play with gas-powered vehicles, of course. But I admit to rarely easing off the accelerator in the interest of saving on gas. It's different with an electric vehicle. Because of the more limited capacity, you're not just saving fuel, you're (hopefully) avoiding another recharging stop before reaching your destination.

Despite our commitment to the slow lane, it became clear we weren't going to make it without another charge. Our phone apps showed a fast charger available outside a travel agency in Wilkes-Barre, Pennsylvania.

Circling the building, we saw no sign of a charger. But the receptionist inside pinpointed its location, noting that her two bosses rely on it regularly to charge their EVs. Fast chargers are generally more expensive than the slow ones. But after charging up for a half hour or so in Wilkes-Barre, we were surprised to discover that the power boost was free. Sorting out which charging stations charge how much — or nothing at all — is among the challenges still on our list.

All this searching and uncertainty got me wondering: What was it like for early adopters at the start of the last century, trying to figure out just where they might refuel their Model T Fords before gas stations were a thing?

By the time we arrived in Lewisburg, we had just 23 miles left in the tank.  We plugged our portable charging cable into a regular, 110-volt outlet in our daughter's garage. The gauge on our dashboard delivered a sobering message: It would be three days before we'd be fully recharged — 5:30 p.m. on Thanksgiving!

The next day, I set out in search of something quicker. At nearby Bucknell University, I found a faster charging station in a mostly empty student parking lot. It turned out that the electricity there was also free — though I did pay $3.20 to park there for eight and a half hours while charging.

Heading home on the Saturday after Thanksgiving, we set off an hour before dawn in hopes of making it back to Boston by nightfall.

Now more aware of the linkage of speed, air temperature and battery capacity, we set the cruise control at 55 and discovered that speed matters in more ways than simply extending our range. We enjoyed the eerie feel of poking along a mostly empty freeway as the spitting snow danced off our windshield.

That pre-dawn drive delivered an unexpected experience of slow travel, the transportation dimension of the so-called "slow movement," an approach to everyday life that focuses on where we are now as opposed to where we might be headed. 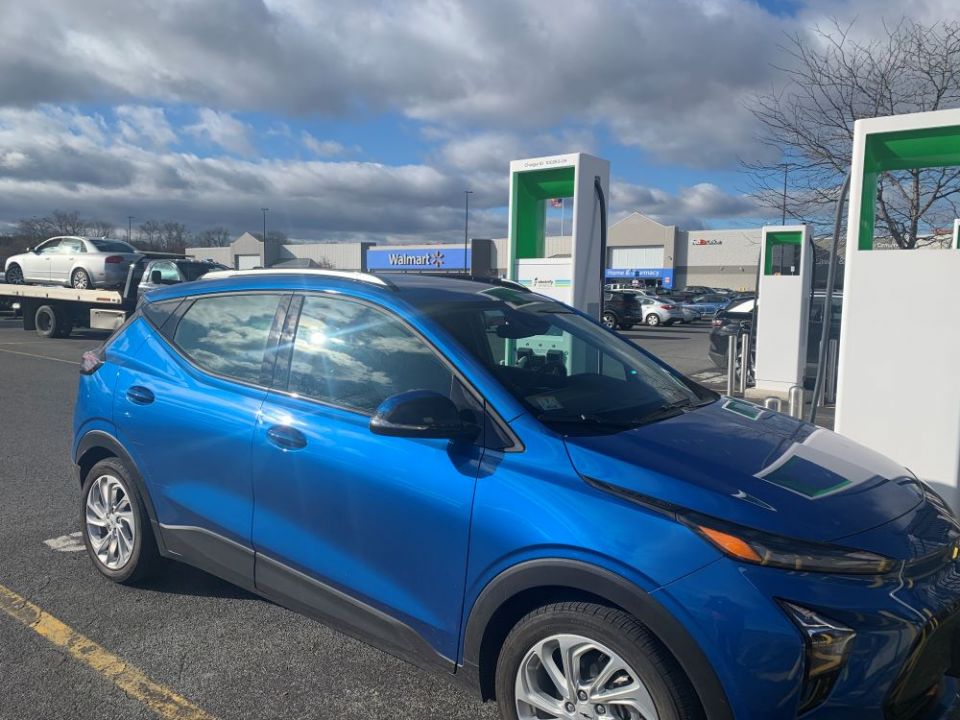 It was also a reminder of the beauty of slowing things down around the holidays, an idea that NCR contributor Brenna Davis explores on EarthBeat in her "Simple Advent Revisited" reflections about a more modest Christmas and slowing down the holiday season.

Less serene was the scavenger hunt required to track down fast charging stations along the way.

And that brings me to …

The phone apps helped, but they were not always reliable and were sometimes confusing. For our next road trip, we plan to spend much more time in advance plotting — and confirming — charging stations along the route.

On this trip, my wife and I were glad there were two of us onboard — one to drive and the other to focus on ways of keeping us in power.

Although charging stops of an hour or more exceed the time required for refueling stops for gas, they can work out fine with a little planning. We did some Christmas shopping during our Danbury stop and, on the way home, took advantage of a Walmart to get in out of the cold while the car charged (for free, in this case) in the store's parking lot.

Our final recharge for the trip was also the most difficult. The screen on one of the Applegreen devices at a rest stop in Sturbridge, Massachusetts, was blank, and we were unable to connect to the charger next to it. A call to a helpline finally got us connected long enough to add about 60 miles of range for $4.19.

All told, we spent about $40 in charge-related fees to drive about 760 miles, less than half what we would have spent on gas for a comparably sized internal combustion vehicle.  And less than we spend per mile when driving around town, fueled by our charger in our garage.

The U.S. Office of Energy Efficiency and Renewable Energy estimates that EVs cost about four cents less per mile to operate and maintain than gas-powered cars. But given the higher sticker price for our EV (even with a discount arranged by our daughter's friend at GM), I wouldn't necessarily recommend an EV as a money saver.

Going electric is at least a partial planet saver, though, not to mention the unanticipated benefits of a slower ride home.