Jaqueline de Oliveira, a single mother in Itamaraju, in the northeastern state of Bahia, has been cooking over a wood or charcoal fire during the past six months. Unemployed and raising four children ranging in age from 6 to 13, she can no longer afford to buy bottled liquefied petroleum gas, which is the most commonly used cooking fuel in Brazil.

"It became too expensive. Food prices, electricity prices, all went up. Cooking gas is now something that we can only buy if we have some money left," she told EarthBeat.

De Oliveira's body bears the marks of that change. She has burned her hands and arms several times while feeding the fire with wood sticks. Although she cooks in the backyard, she suspects that inhaling the smoke is affecting her health.

"I have been feeling more tired ever since. I have high blood pressure, and I think the smoke is having an impact on it," she said.

De Oliveira's situation is becoming more and more common in Brazil, as the combination of high unemployment, rising inflation and higher prices for oil-based fuels has led millions of people to switch from gas to wood and other solid fuel for cooking. More than one-fourth of Brazilian households use wood for cooking, with consequences for air quality and families' health.

The problem affects residents of both rural areas and crowded, low-income urban neighborhoods. People in the countryside and in small cities tend to have more outdoor space where a fire poses less danger, but in the slums of large cities like Rio de Janeiro and São Paulo, the tiny, cramped houses — which often look more like wooden tents — are crammed close together, and the improvised stoves and fire pits pose great risks.

The average price of a 28-pound cylinder of LP gas rose from 69 Brazilian reals in January 2019 to 100 in October 2021. The price in dollars — approximately $18 — has held fairly steady, but because the value of the Brazilian real dropped during that time, the difference is substantial for Brazilians. In some regions of the country, that amount of gas can cost up to 135 reals, equivalent to about $24.

According to the governmental Energy Research Company, the use of wood for fuel increased by 1.8% between 2019 and 2020. Wood has edged out cooking gas as the second most important source of home energy in Brazil, after electricity. About 26.1% of households were cooking with wood last year, compared to 24.4% for gas, and analysts believe the gap has increased in 2021. 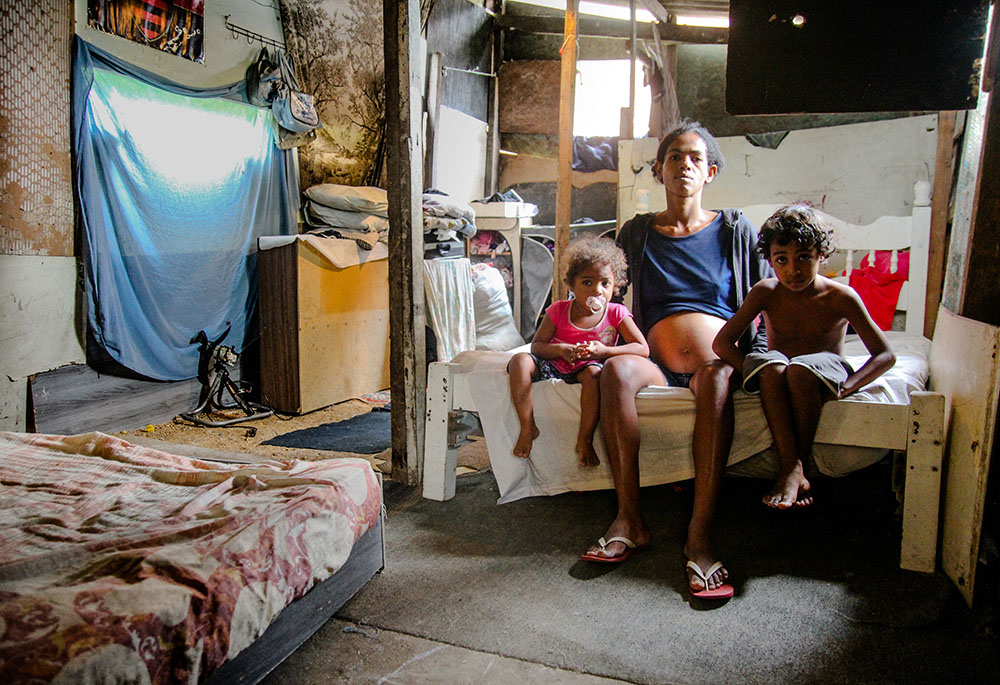 Neilma da Cruz Silva, and two of her children sit on a bed in their tiny wooden house in the Complexo do Alemão, a complex of low-income neighborhoods known as favelas, April 2020 in Rio de Janeiro. She and her husband, parents of four children under age 10, have been unemployed during the COVID-19 pandemic and often have not had enough food for their family. (Bruno Itan)

Cooking with wood is a huge step backward for Brazilians. Over the past few decades, increasing urbanization and greater infrastructure development allowed most families to abandon wood stoves and buy modern, LP gas-fueled ones.

In 2017, however, the state-run oil company Petrobras began linking fuel prices to international prices, which fluctuate, according to Bishop José Reginaldo Andrietta of Jales, in the state of São Paulo, who leads the Workers Pastoral Commission of the Brazilian bishops' conference. The price of cooking gas has risen steadily since then.

He would like to see the government not only unlink Petrobras' prices from the international market, but also subsidize fuels for the poorest Brazilians.

"The rich and the poor cannot pay the same, given that the impact for the poor is much greater. Equality is not about that. It is unfair," he said.

Since 2013, Adriana Gioda has been one of the few scientists studying the health and environmental impacts of cooking with wood in Brazil. A chemistry professor at the Pontifical Catholic University of Rio de Janeiro, Gioda said a government-sponsored survey that could provide information for better understanding the impact of the current use of cooking fuels has been postponed.

"Nevertheless, it is noticeable that the use of wood is growing," she told EarthBeat.

That is increasing indoor air pollution for families forced to cook with wood.

One key problem, Gioda said, is that people do not use as cooking fuel wood that is certified as having come from sustainably managed forests, but scavenge construction debris and wood scraps in both cities and rural areas.

Burning painted wood scraps can make the situation even more hazardous by releasing toxic substances along with smoke.

"If a piece of wood was painted with lead-based paint decades ago, that substance will now be released into the atmosphere," Gioda added.

Adding to the danger is that commonly used wood stoves often do not burn wood efficiently and lack adequate chimneys, so they are not properly vented.

"Improvised stoves do not burn the solid fuels completely. The incomplete combustion releases more particles into the air," with an impact equivalent to smoking five or six packs of cigarettes a day, Gioda said.

"Women are especially affected, because they are the ones who usually cook at home, and children, because they tend to be close to their mothers," she said.

The indoor pollution can aggravate allergies and other respiratory problems, and long-term consequences of exposure can be even more serious.

Studies in Brazil have shown that the use of firewood resulted in higher concentrations of airborne particulates and other pollutants than cooking with gas, with greater risk of respiratory problems and certain cancers. It also affects outdoor air quality, adding to the impact of the hundreds of wildfires that have burned in recent months.

"Particularly at a local level, the air quality certainly gets worse," Gioda said. 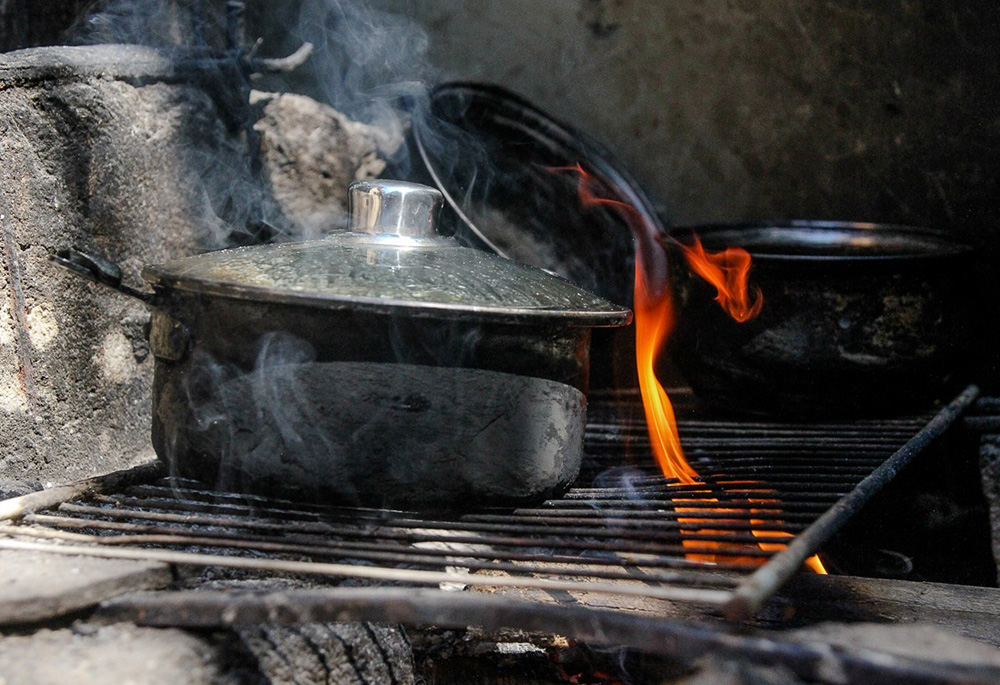 The switch to wood also increases the risk of burns and other accidents, especially among children, said Fr. Antônio Naves, who works in Jardim Elba, a poor neighborhood in São Paulo.

"Sometimes, the flames get out of control and the entire house burns down," he told EarthBeat.

Naves said that not only the residents of favelas have been cooking in improvised stoves, but also unhoused people.

"We frequently see people living under the bridges and cooking in fire pits – when they manage to get some food," he said.

Franciscan Fr. Sérgio Görgen, a longtime activist in Brazil's Small Farmers Movement, said the situation could get even worse, because of a looming crisis in the production of certified wood.

"Wood prices are going up in the countryside of Brazil, especially now that more people are demanding it because of the high price of cooking gas," he said. "There is an imminent risk of a supply crisis of wood."

Görgen explained that the area planted in eucalyptus trees, one of Brazil's main sources of certified wood, is being reduced, as farmers prefer to plant soybeans. Meanwhile, most of the wood produced legally in the country is being used by the paper industry or exported to China. That, he said, could result in increased use of wood from native trees for cooking fuel.

In October, the Brazilian Congress approved a voucher system to subsidize cooking gas for low-income families enrolled in government social programs. For a family of five using one cylinder of gas every six weeks, that would decrease the cost of cooking gas to about 83 reals, or $15, a month.

Some 27.4 million Brazilians live in households that earn barely more than $230 a month, according to the nonprofit Getúlio Vargas Foundation. Even with the subsidy, those families would spend more than 6% of their income on cooking gas.

Gioda, the researcher from the Pontifical Catholic University, said the subsidy is likely to be insufficient, given that food prices have risen by 40% and unemployment among the poor by 8.5% since the COVID-19 pandemic began.

If the voucher program is not designed well, she said, instead of decreasing the use of wood for fuel, it could create a gray market for LP gas, with people buying gas with vouchers and then reselling it to stretch their limited income.

"The number of unemployed people is too high," Gioda said. "It's no use getting a gas cylinder if you don't have food."

A version of this story appeared in the Dec 24, 2021-Jan 6, 2022 print issue under the headline: Rising prices drive unsafe cooking fuel.