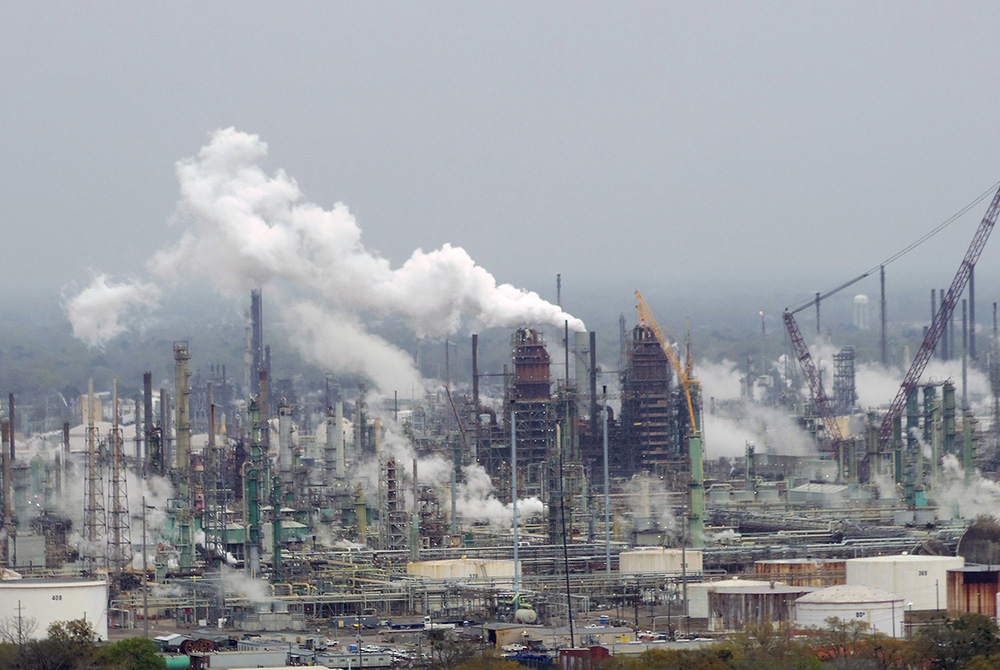 The ExxonMobil Refinery in Baton Rouge, Louisiana, is seen from the top of the Louisiana State Capitol, in a 2017 photo. (Wikimedia Commons/WClarke, CC by SA 4.0)

What's being called one of Big Oil's worst days was seen by Catholic and other shareholder activists as a big victory and sign of a potential sea change in their decadeslong push for fossil fuel companies to address their central contribution to climate change.

In three separate settings on May 26, the fossil fuel industry suffered blows to business as usual.

Shareholders of ExxonMobil, once the world's largest company, approved at least two of four alternative board candidates with backgrounds in energy transitions nominated by the activist hedge fund Engine No. 1. As of June 1, final vote counts were still pending for the other two. Shareholders also approved resolutions requiring disclosure about ExxonMobil's lobbying activities and whether and how its lobbying aligns with goals of the Paris Agreement.

At their annual meeting, 61% of Chevron Corporation shareholders backed a resolution calling for the company to significantly increase its greenhouse gas emissions cuts, including in its operations and supply chain. And a first-time resolution, calling for an audited report of the risks to business posed by net-zero by 2050 carbon emissions scenarios, received near-majority support.

And in the Netherlands, a district court ruled that Royal Dutch Shell was legally required to cut its carbon emissions by 45% from 2019 levels by 2030. Environmental groups say that is the first time a court has ordered a company to bring its emissions reductions into line with global climate targets. Shell, which plans to appeal, had previously committed to a 20% reduction in that timeframe.

"It was a wild day," said Dominican Sr. Pat Daly, a longtime shareholder advocate whose community, the Dominican Sisters of Caldwell, New Jersey, are members of the Interfaith Center on Corporate Responsibility.

"[It's] like the Earth has moved. Corporate America has shifted," she told EarthBeat.

John Geissinger, chief investment officer at Christian Brothers Investment Services, said the shareholder actions underscored the fact that corporate boards work for shareholders, who are the owners of the companies.

"As owners, we have not only the right but the obligation to speak up if management and the board are not operating the company as we see fit," he said, adding that the day was a reminder to the boards of fossil fuel companies "that the path to profit is achieved by following the path to protect our common home."

The flurry of corporate decisions punctuates an ongoing decline for the fossil fuel industry, which has seen its share of the S&P 500 drop from 30% in the 1980s to just 3% in 2020.

That downward slide has aligned with increasing global focus on climate change and efforts to reduce greenhouse gas emissions, which reached a crescendo in 2015 with the adoption of the Paris Agreement. Climate change is mainly caused by burning fossil fuels, which emit heat-trapping greenhouse gases that build up in the atmosphere and can linger there for centuries.

"The tide has changed," said Daly, who along with other religious investors met with ExxonMobil and Chevron executives earlier this year.

"It's certainly a signal that a new business plan absolutely needs to be put in place," she said. 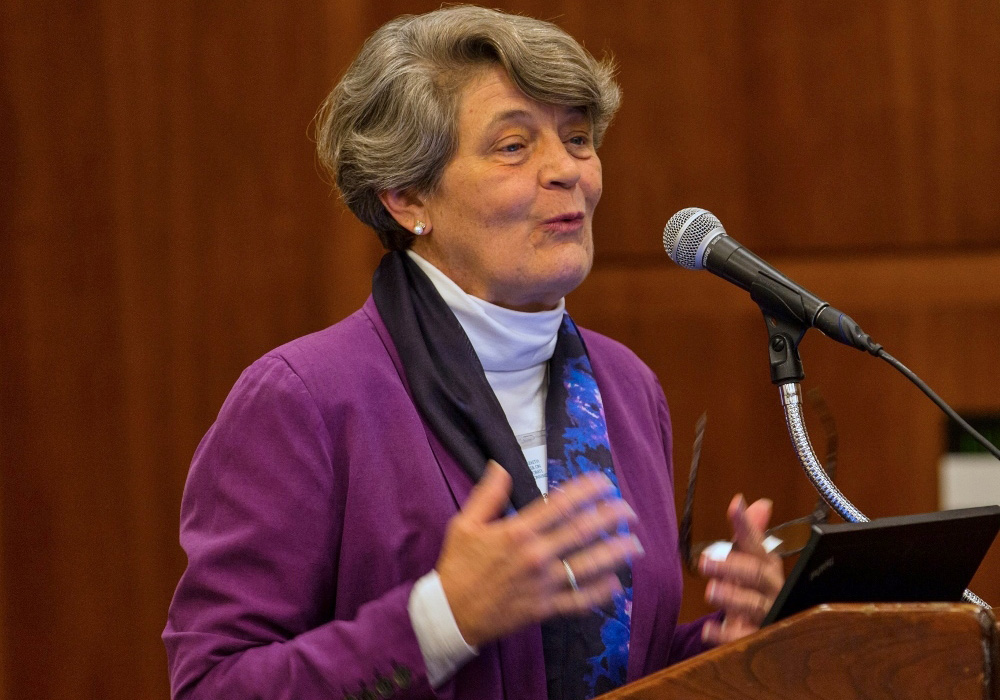 The day may also have brought the biggest victory for climate-focused shareholder advocates since 2017, when they garnered 62% support for a resolution calling for ExxonMobil to produce an annual report on the long-term implications of the Paris Agreement goals for its oil and gas reserves. Joining that resolution were numerous religious investors, who introduced the first climate shareholder resolution at an ExxonMobil meeting in the late 1990s.

For many, this year's ExxonMobil board showdown took center stage. Once the world's largest company, in the past two years it has fallen out of the S&P 500's top-10 companies and the Dow Jones Industrial Average. The company lost $22 billion in 2020 during the pandemic, Reuters reported.

At the May 26 meeting, the independent directors nominated by Engine No. 1 and elected to the oil company's 12-member board drew support not only from the religious shareholder activists, but also from major U.S. pension funds and some of the world's biggest investment firms, including BlackRock, which supported three of its four candidates. A one-hour recess interrupted the vote count, in a move viewed as an attempt by ExxonMobil to garner additional support for its preferred candidates. Daly called the pause "unprecedented."

Shifting even a portion of ExxonMobil's board opens the door for systemic change from an oil-and-gas giant to an energy company with greater focus on renewables, Daly said. The need for a new vision, she added, was evident during CEO and board chair Darren Woods' presentation, which focused on a carbon capture and storage project outside Houston and prospective oil fields in Guyana and the Permian Basin in the U.S., despite increasing international calls for a rapid transition away from fossil fuels to avoid the most serious climate impacts.

At the ExxonMobil meeting, members of the Interfaith Center on Corporate Responsibility also presented a non-binding resolution to separate the company's CEO and board chair positions, and require the chair to be an independent member of the board.

Another resolution, proposed by Christian Brothers Investment Services, asked ExxonMobil to issue an audited report by January 2022 on the financial risks associated with significant reductions in fossil fuel demand projected in a recent International Energy Agency report that examines scenarios for reaching net-zero global emissions by 2050. A vote total on the resolution had not been released as of June 1. The co-filers included the Benedictine Sisters of Virginia, Dominican Sisters of Hope, Maryknoll Sisters, Sisters of St. Dominic of Caldwell, New Jersey, and Presbyterian Church (USA).

At the May 26 Chevron meeting, 48% of shareholders in a preliminary count supported a similar resolution, brought by As You Sow, another shareholder advocacy group.

The International Energy Agency report concluded that holding average global temperature rise to 1.5 degrees Celsius above pre-industrial times — the more stringent goal that more than 190 countries have pledged to pursue under the Paris Agreement — will cause demand for natural gas to decline by 55% and demand for oil by 75%. The agency also recommends no new investment in coal, oil or gas projects.

A separate report from the World Meteorological Association, issued the same day as the shareholder actions, stated there is a 40% chance that one of the next five years will see the planet temporarily surpass the 1.5 degree threshold.

In presenting the resolution at the ExxonMobil meeting, Geissinger of Christian Brothers Investment Services pointed out that nine of the world's 10 largest economies have committed to net-zero carbon emissions by 2050. That includes the U.S., which in April pledged to cut emissions in half by 2030 and reach net zero in the power sector by 2035.

"The fact is the landscape has changed," he told fellow shareholders, adding, "We cannot simply assume the fossil fuel sector will be as it always was. Events on climate risk are evolving rapidly. Our directors must show awareness of and responsiveness to changing circumstances and evolving risks and provide shareholders this disclosure."

Geissinger told EarthBeat that the resolution was important because it would ensure greater transparency, particularly about the financial implications of the International Energy Agency scenario for the company's future prospects, and would highlight the risks of maintaining the status quo.

The trio of corporate victories prove that small-stakes shareholders can still have a large impact, he added. In the case of Engine No. 1, the hedge fund controlled $50 million of ExxonMobil, just a fraction of the $250 billion company. Christian Brothers holds half that amount in the oil company across its portfolios.

"You don't need to be a Goliath to make a big change through the resolution process," said Geissinger.

The shareholder advocates urged more Catholic institutions to wield their power as investors, and that the May 26 events demonstrated the importance of continuing to work with corporations at a time when global campaigns for fossil fuel divestment have moved more than $14 trillion away from coal, oil and gas companies.

Daly pointed out that even leading divestment proponents, like Bill McKibben, celebrated the shareholder victories, which she said acknowledges the benefit of a multifaceted approach to putting financial pressure on fossil fuel companies.

As profit-driven investment firms like BlackRock increasingly join with shareholder advocates on resolutions, the moral imperative for moving away from fossil fuels is seen as financially prudent, as well, observers say.

"If we're not at the table pushing for change, who will?" Geissinger said.

Editor's note: This article has been updated to correct that religious organizations co-filed the resolution at ExxonMobil introduced by Christian Brothers Investment Services, not the resolution presented by members of the Interfaith Center on Corporate Responsibility.