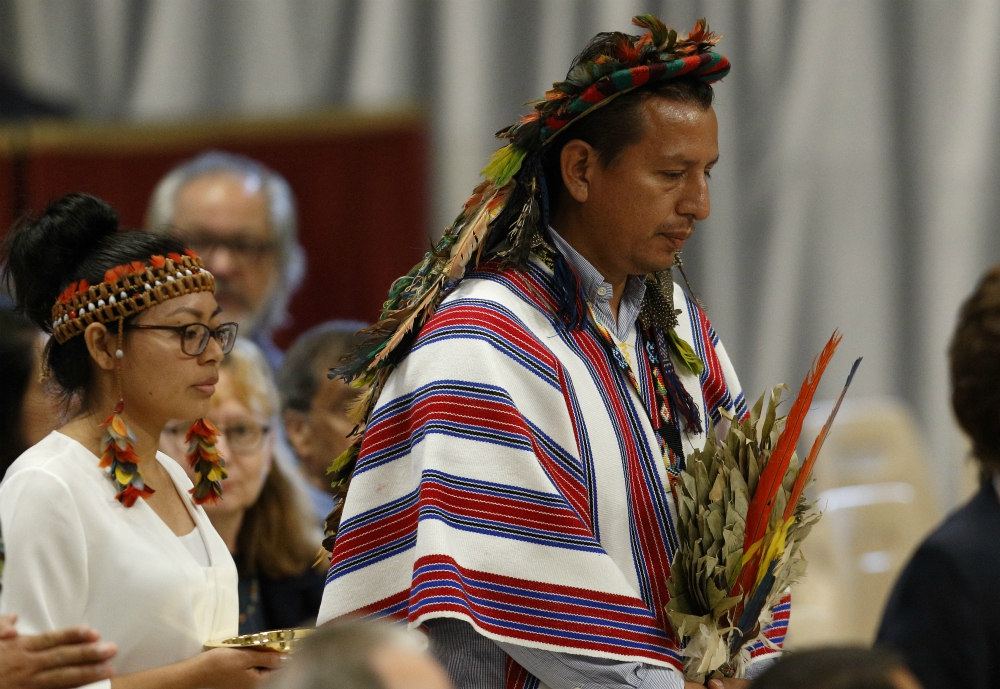 Indigenous people carry offertory gifts as Pope Francis celebrates the concluding Mass of the Synod of Bishops for the Amazon at the Vatican Oct. 27, 2019. (CNS/Paul Haring)

Editor's note: Mauricio López Oropeza is executive secretary of the Pan-Amazon Church Network (REPAM), which connects the bishops' conferences and church communities across the nine-nation Amazon region and was the primary organizer for the hundreds of on-the-ground consultative meetings leading up to the 2019 Synod of Bishops for the Amazon. López was named by Pope Francis in March 2018 as the only layperson among the 18 members of the pre-synodal council that helped draft the gathering's eventual working document, and was later a participant at the synod. Originally from Mexico, he now lives in Ecuador.

It's Wednesday, Feb. 12, and I'm on the road into the Amazon region in Ecuador. We had to leave very early in the morning to make it on time for the diocesan vicariates' assembly after a four-hour drive into the town of Puyo. It's not just another day for us. This is the day we had been waiting for in which Pope Francis was to present his post-synod apostolic exhortation: Querida Amazonia.

As we are on the road, I start reading a good number of articles, previews and reflections about this, and most of them come from elsewhere, from all around the world. This is good in a way, but then I start sensing again and again the lack of understanding in commentaries that are not truly concerned with the Amazon and its peoples. The reflections are mostly focused on an obsessive concern with the implications of this exhortation for the universal church, rather than its true impact in the lives of those communities here in the Amazon, suffering and wishing to deepen their faith life in a more connected way with their cultural and ancestral identities.

This was to be expected of course, but this ghost, and this feeling we experienced during the assembly in October, comes back again. The words that come to mind as I read most of those pieces are the same words that came to mind during our stay in Rome: disconnection, self-affirmation, Eurocentrism, incomprehension, incompatibility.

Moreover, the pieces demonstrate a disrespect for the central focus of this synod — the lives and the future of the peoples in the Amazon.

The commentaries often ignore the indigenous peoples who represent other different possibilities for responding to this massive climate crisis, or their attitude of caring for creation that we need so much to be incorporated into the Catholic Church, or their deep desire and right to live their faith in a more connected and respectful way towards their cultural identity and spirituality.

Of special concern is the suffering they face from the threat of extractive interests allied with their local and national governments, which fail to respect their rights, putting their lives and futures at risk. 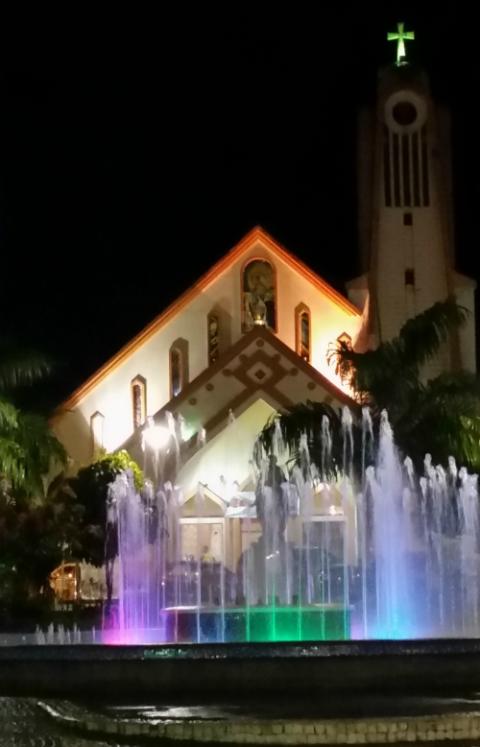 Our Lady of the Rosary Cathedral in Puyo, Ecuador (Wikimedia Commons/David C. S.)

Throughout this four-hour drive, I start to feel anxious. When the press conference about the document begins in Rome, my internet connection is so poor that I can't follow it live, but as it goes on, I continue to feel as if the whole synodal process had been held hostage by some portions of the media (and the interests behind them), focusing on one thing only: the approval or not of married priests.

So, I think to myself, how can this be when this is only one proposal out of 200 possibilities presented in the final document? This is one issue, important certainly, but in no way the most important one for the peoples in the Amazon.

I can't help but recall the polarization of very small fractions of the synod's assembly, two extremes lacking a true capacity for listening as the pope did — and as he asked for — as a requirement for communal discernment.

On one extreme, the conservatives accepting no change at all and placing themselves as the protectors of the so-called orthodoxy of the church, when in fact it seems to be their intent to protect the status quo approach to how the church is to be governed. It is a Western, Eurocentric view that by no means represents the whole of the beautiful diversity of our church. We need to know that this diversity is part of our own history and identity, meant to express the true catholicity of our church.

And on the other side, I see some people defending a position that is more ideological than pastoral, arguing that the changes need to happen in a time frame of their choosing and with the features they consider essential. Any outcome not in line with their wishes is considered soft or lacking courage.

Both small sides seem to be uncomfortable with the final resolutions of the assembly, and I can't but realize that in both cases many of those persons do not actually live in the Amazon region, and do not directly work on a daily basis connected with this territory and its people. It seems as if both sides were using the Amazon as a means to advance their particular intentions, regardless of the actual cries and hopes of this territory and its peoples.

At this moment, I notice that we have left the Andes region of Ecuador, we've left behind the mountains with permanent snow, and we are actually entering the beautiful natural gate into the Amazon region. She, the Amazon region, explodes in front of my eyes. Beautiful, untamable, diverse, full of contrasts, and vibrating in life. 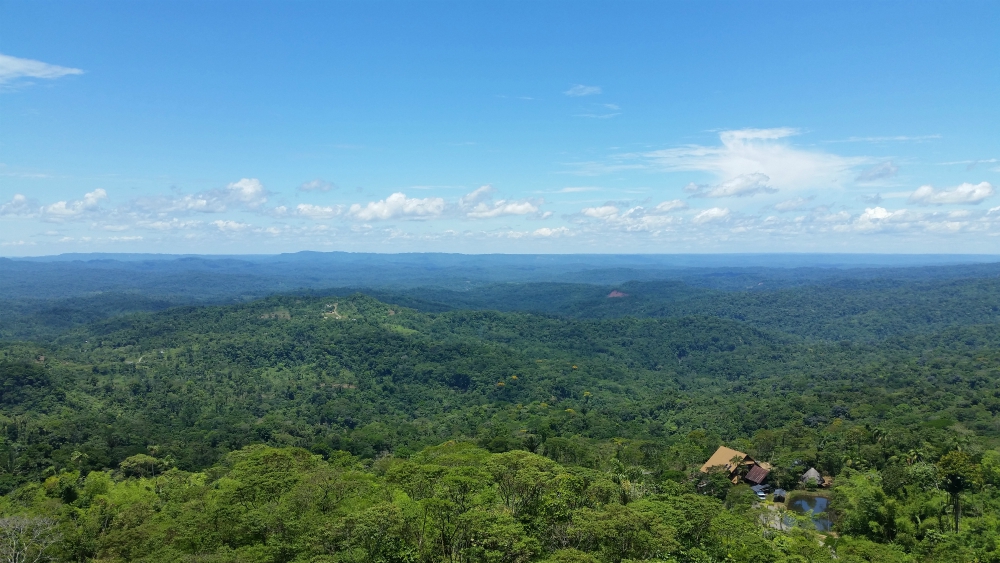 A view of the Amazon rainforest on the Puyo-Macas road in Ecuador (Wikimedia Commons/David C. S.)

This is when it comes to mind what's been the center of our REPAM approach in this whole process: It's the lives of the peoples and the promise to respect and honor their voices that have brought us here. It is our commitment to come back here and to be able to look them in their eyes to tell them we've fulfilled our promise to bring their voices to the pope so they would be heard, and to make sure their most urgent cries and hopes would be respected and acknowledged.

As I see the enormous diversity of the flora out there, I also think about the 200 and more proposals in the final document representing the people's expectations, and I feel confirmed that we cannot allow the fear of those who are not here, nor work with these peoples, to be what leads the discussions.

How can some dare say this was an intention to destroy the core values of the church?

This does not match what I hear from Catholic sisters and brothers living in this territory, expressing that for the first time they feel acknowledged, along with the richness of their identity and traditional spirituality. They know that for the first time their church will embrace their wisdom in protecting our common home, our mother Earth, instead of rejecting their identity as Catholic sons and daughters of this land.

On the other hand, how dare some so-called progressive representatives of the church say this was a failure, and even suggest the pope surrendered to outside pressures?

The only thing the pope is surrendering to is the discernment of the voice the Holy Spirit. This exhortation is an absolutely beautiful love song and a love letter for the people in the Amazon, and a wake-up call for the church as a whole.

As we've been saying over and over again, nothing will ever be the same after this synod. Only those who love the church, trust the Spirit, and surrender themselves into a wider presence of God — beyond their own conservativism or ideological self-referring view — will understand this true kairos moment and will act and trust accordingly. For we know these are seeds planted that will continue to grow and blossom over the years and generations to come, to bring about the integral conversion and the four conversions (pastoral, cultural, ecological and synodal) resulting from this discernment and expressed in the synod's final document.

Today, I had the chance to share with the Amazonian church of Puyo the pope's four dreams in his exhortation. I asked them what are their dreams for their present and future mission in this portion of the Amazon. I saw hopeful eyes, vibrant commitments, and concrete decisions to go forward in communion with what the pope has offered as a love letter sent to them directly.

So, I think to myself, "This is it." Anyone who writes and reflects on this exhortation should come here if they can, and listen to what's in the heart of these people before taking a position on this matter.

While it's obvious most wouldn't be able to come, I wish they could read with an open heart the preparatory document and the final document, so they could recognize the voices from the territory and therefore, maybe, they would change their perspective. This is the periphery breaking into the center, helping it to change, as the pope had wished for in this synod. 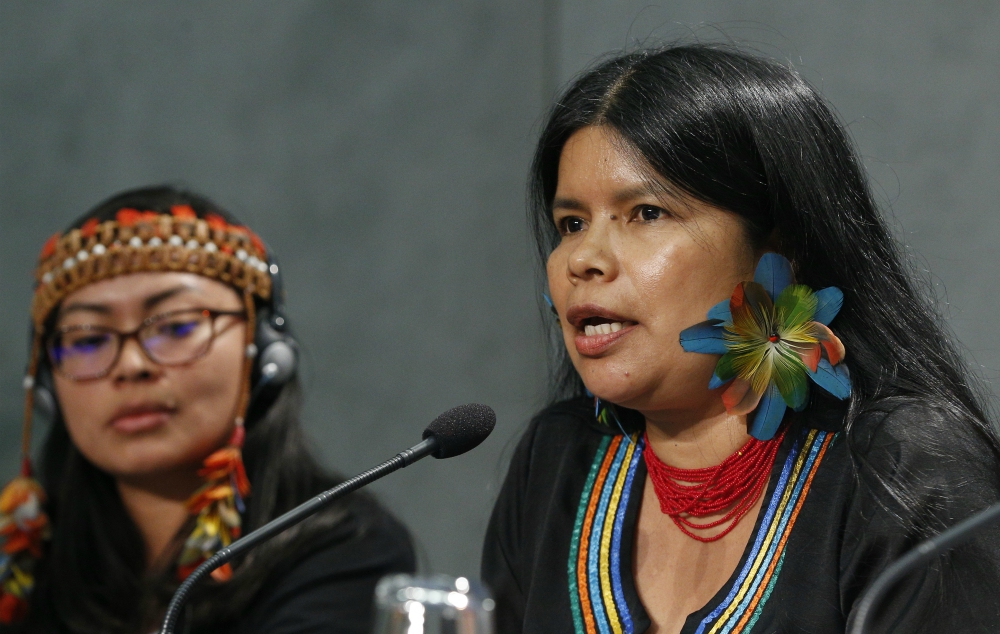 Patricia Gualinga, an indigenous rights defender from Ecuador, speaks at a news conference to discuss the Synod of Bishops for the Amazon at the Vatican Oct. 17, 2019. Also pictured is Leah Rose Casimero, an indigenous representative from Guyana. (CNS/Paul Haring)

Before I go back to Quito where I live, I have the privilege to visit an admired friend, Patricia Gualinga, who is one of the strongest indigenous leaders I've ever met. She is a well-respected promoter of indigenous rights internationally, and also a devoted Catholic who was part of the whole synodal process, including the assembly, and who will be part of the post-synod commission appointed by the pope.

The conversation is, as usual, profound and full of hope, but she also wonders why most of the discussions around the synod have ignored the issues most important to the people of the Amazon.

We know there is a decision from some media representatives to divert the attention from the truly crucial issues of integral ecology, intercultural expression in the church, and the broader view of promotion of ministries according to the reality of the Amazon. These issues come from the heart of people, and we know there is no chance they will be stopped from being developed and deepened.

God continues to be manifest in the midst of the mystery of this territory and its peoples, regardless of the fear of changing this might produce in some, or the desire of others of controlling this and making it ideological.

Christ continues to incarnate himself in every culture and the seeds he has planted are there, all over the place, so he will continue to prevail, to enlighten our journey and our structures, making everything new over and over again. Thank you, Querida Amazonia.