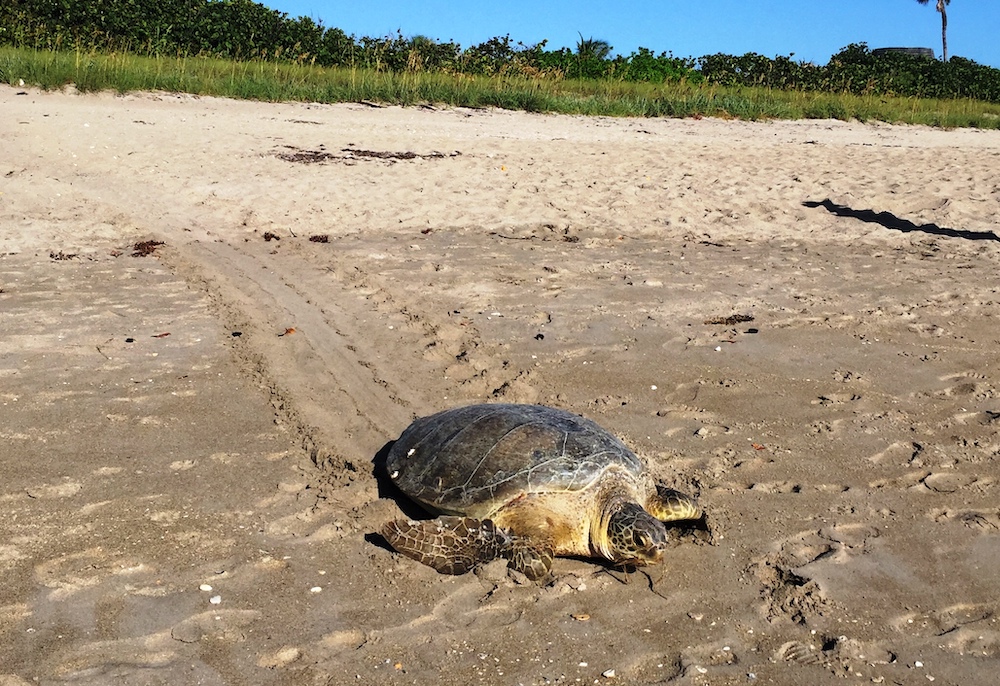 Early in the coronavirus pandemic, I was blessed to "shelter in place" at a friend's beachfront condo on one of Florida's barrier islands. Hutchinson Island stretches from south of the city of Stuart, past Fort Pierce and into Vero Beach, off Florida's Atlantic coast. From mid-March until mid-May, I walked the beach (when restrictions allowed) and found some solace amid our collective sorrow in glorious sunrises and nature's wonders along the shore.

With the beaches closed except for those with access — as we had — to the "high water mark," it was easy to see the rejuvenation of marine life along the shore. Sand crabs "competed" in building nests bigger and better than the others. Pods of dolphins swam offshore — I'd seen them while sailing, but never from the beaches. Pelicans in formation arrived every morning, as did seagulls, for breakfast of greenies and other small fish. And most delightful to me was the evidence of sea turtles.

Each day, I could see more sections marked off with orange tape, stakes and signs warning against disturbing the nests. More nests meant more baby turtles that might make it to sea, avoid becoming a meal for seagulls or fish, and maybe — just maybe — mature, and make it back to these same beaches 20 to 30 years from now, when they reach sexual maturity, to dig their own nests. Female sea turtles will return to the beaches where they were born, even if 30 years have passed since they left. One turtle will lay multiple clutches of eggs and then not nest again for about two to five years — and it can keep doing that until age 80. But the odds are against them, as hatchlings face hungry predators, and adult turtles risk ingesting plastic or getting tangled in fishing gear.

The marked nests were also evidence of how conservation measures, public awareness and research are helping these endangered creatures survive. That alone was reason for cautious hope that maybe this would be a guardedly "good news" story about how environmental safeguards and monitoring are allowing an age-old ritual to persist despite human encroachment and development pressures.

In my career as a reporter in South Florida, I had often covered the conflict between developers who saw the beaches and mangrove lagoons as prime real estate for condos and hotels, and environmentalists who warned of devastation of species — including sea turtles — with reverberating effects on humans if preservation measures weren't enacted. Sea turtles are considered a keystone species and are vital to a healthy ocean ecosystem.

The winners and losers of those battles are evident all along Florida's coasts, particularly those I'm most familiar with — from the "Gold Coast" of Miami-Dade, Broward and Palm Beach counties, to the region just north, including Martin, St. Lucie and Indian River counties, dubbed the  "Treasure Coast" because of the many Spanish galleons that sank just offshore.

A drive along coastal highway A1A clearly shows the tougher development restrictions in Martin County, which limited the density and height of buildings and required set-asides for plenty of public-access beaches, compared with the towering condos and more limited beach access in St. Lucie County. Members of my family settled in Martin County more than 40 years ago, and I lived and reported in the region for The Miami Herald in the mid-80s during my decades-long stint as a journalist in South Florida before moving to the Washington, D.C., area in 2011. Over the years, I've witnessed the increasing development, which is why it was reassuring that the sea turtles were also claiming their part of the beach.

On my morning beach walks this past spring, I'd watch researchers tool along the beach in their dune buggies, stopping as they recognized signs I couldn't see that female sea turtles had lumbered ashore the night before to dig their nests and lay a clutch of eggs. They would carefully check the nest and erect the orange plastic tape "fence" around it with stakes bearing a code for each species — not to be revealed lest poachers figure it out — and signs warning against disturbing the nests. Penalties under Florida law can include 60 days in jail and a $500 fine, plus an additional $100 for each egg destroyed or taken. The federal Endangered Species Act allows sanctions of up to a year in prison, civil fines of $25,000 or criminal penalties of $100,000. 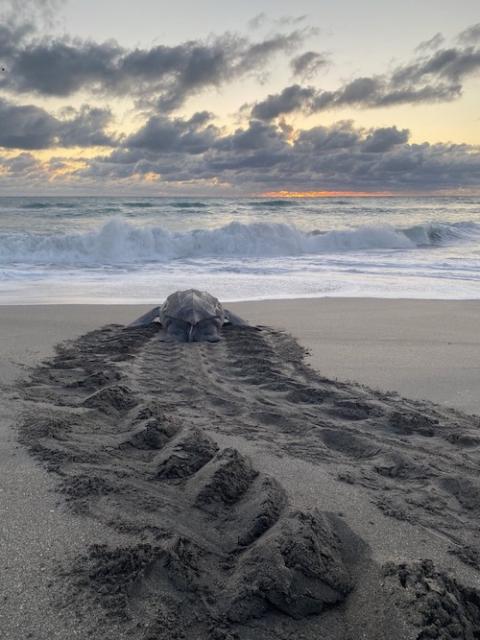 A leatherback sea turtle, "Dermochelys coriacea," returns to the water after nesting, May 7, 2014 (Ecological Associates Inc.)

Each of the three species found in this area — loggerheads, green and leatherback turtles — has distinct tracks and methods for digging its nests, explained Lauren Maline, a biologist with Ecological Associates, an environmental consulting firm based in Jensen Beach, Florida, which conducts a sea turtle monitoring and conservation program, under a permit from the Florida Fish and Wildlife Conservation Commission. Maline and her colleagues survey and mark nests, tag juvenile and adult turtles, assess coastal lighting, conduct environmental impact studies, and do education and outreach.

The basics of the ritual are the same: a turtle lumbers onto the beach, wriggles into the moist sand and digs a nest shaped like an upside-down light bulb. After she lays the eggs, she'll cover and seal the nest, then try to camouflage it, sometimes even digging a secondary body pit to distract predators like raccoons. The clutches of eggs, which range from around 50 to 200 or more, depending on the species, incubate for 45 to 60 days before hatching. The baby turtles then start the most perilous period of their lives just trying to make it to the ocean. Hungry predators like crabs and raccoons on the shore and birds and fish in the ocean are a threat to hatchlings. Estimates of the number of hatchlings that grow to maturity range from 1 in 1,000 to 1 in 10,000.

On the beach, turtles orient themselves by light, and on the beach at night, the brightest natural light is moonlight on the water. Artificial light can disorient adult sea turtles after nesting, guiding them to roadways or even swimming pools. Hatchlings can also become confused by coastal lights and crawl in the wrong direction, becoming tangled in weeds along dunes or end up in parking lots.

Ecological Associates is contracted to mark and monitor the nests and conduct lighting surveys of nearby condos, homes and hotels to ensure they are sea turtle friendly. Retrofitting options are presented to property owners and reports are sent to local code enforcement offices. Conservation measures and other regulations appear to be helping. Counts for loggerhead and green sea turtle nests have shown an increasing trend on 27 beaches used for monitoring, according to the Florida Fish and Wildlife Conservation Commission. But leatherback nests have been decreasing and the patterns are as yet unclear, the report states. 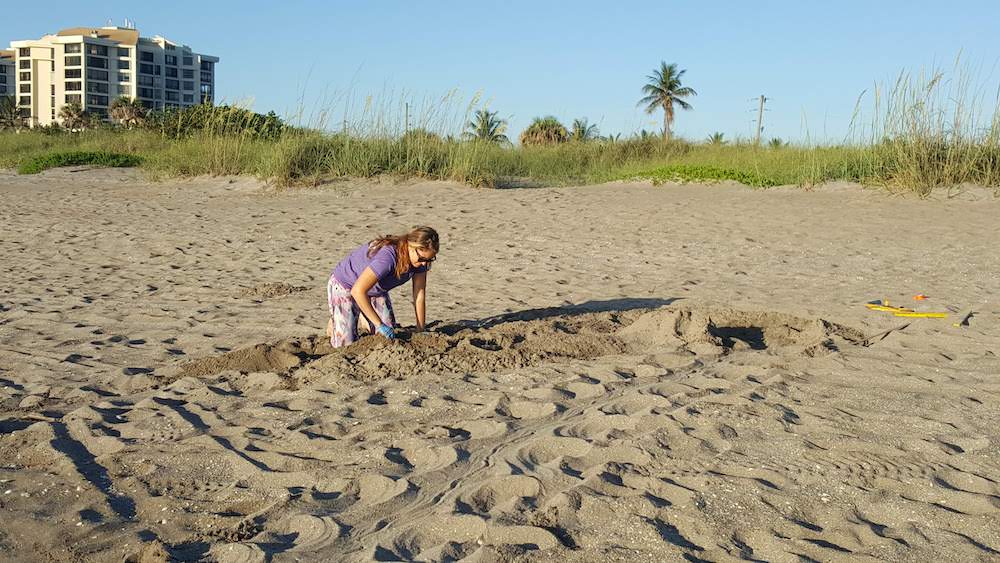 Carly Batts, a field technician with Ecological Associates, checks and marks a loggerhead sea turtle on Hutchison Island, Florida near Fort Pierce. All EA's turtle research and monitoring is done with under special permits from the Florida Wildlife Conservation Commission. (EarthBeat photo/Gail DeGeorge)

The biggest threats to turtles, of course, are humans. Turtles get caught in fishing nets, particularly "ghost nets" cut from boats and allowed to drift in the sea. But there are other dangers from humans, as well. "We're working on conservation efforts to educate people about beach litter, particularly plastics, going into the ocean," Maline said. Plastics often resemble jellyfish, which look like food to the turtles, and the animals also swallow microplastics.

Climate change is a growing threat. Rising sea levels will decrease the amount of suitable nesting habitat, and cause more nests to be washed out or inundated by water. An increase in beach temperatures can also affect turtle gender. The temperature of the sand determines the gender of turtles in the incubating eggs. Those in the lower, cooler part of the nest become males, while those in the warmer, upper part of the next become females. Researchers warn that warming temperatures could lead to more female than male sea turtles, skewing the sex ratios and impacting overall reproductive success.

Checking in with Maline a few weeks ago, I got good news about two of the nests near where I had been staying. The eggs had hatched, and the baby leatherbacks — the largest of the turtle species — had made their way to the ocean. I can only hope some will survive to adulthood and return to this stretch of beach to start the ritual again.

Watch the sea turtles who come to Hutchinson Island to nest. (YouTube/NCRonline)

[Gail DeGeorge is editor of NCR's Global Sisters Report. Her email address is gdegeorge@ncronline.org. Follow her on Twitter: @GailDeGeorge.]