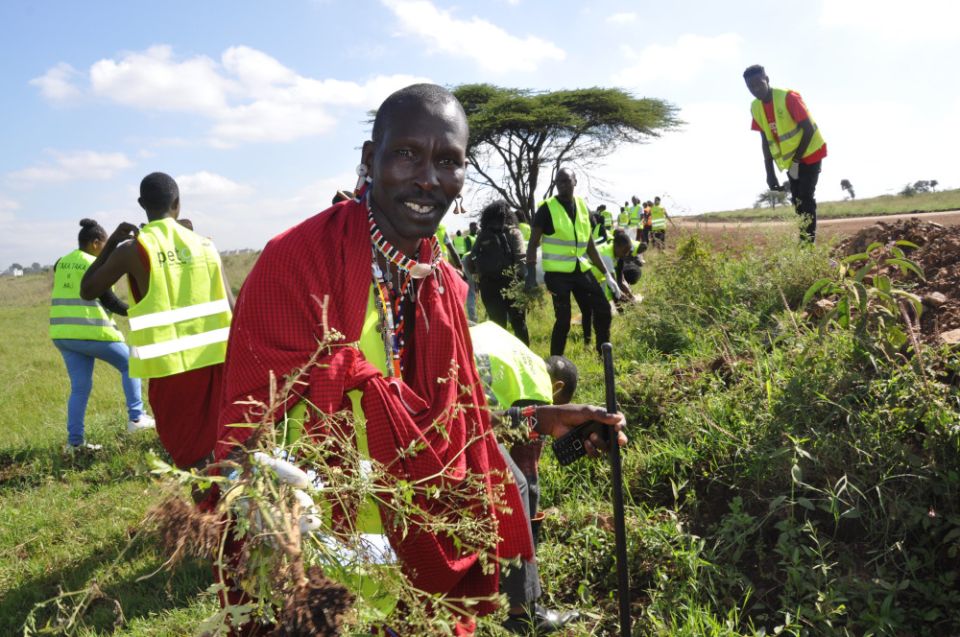 Amos Kwaite, a member of the Maasai community, joins Kenyans including members of the Laudato Si Movement in a cleanup of Nairobi National Park June 4. 2022, as part of the observance of World Environment Day. (CNS/Fredrick Nzwili)

NAIROBI, Kenya — Catholic environmental activists participating in the Laudato Si' Movement in Africa matched their words with actions, mounting cleanup efforts and educational programs as part of the observance of World Environment Day.

Working a short distance from grazing African buffaloes, activists June 4 cleared debris and unwanted plants in Nairobi National Park outside of Kenya's capital and the nearby Mbagathi River.

"We want to make sure that our parks do not have any waste such as plastics and anything else that should not be there," Papa Prince, program manager for the Laudato Si' Movement in Africa, told Catholic News Service while working.

The movement is a global community of Catholics tackling the climate change crisis.

"This is a call for all of us who really love the parks around the city, to maintain cleanliness and safety for each one of us, and wildlife. That which should not be inside the park should be somewhere elsewhere," he said.

The work allowed participants better understand that earth is the home of diverse animals and plants, and that people are called to care for the planet.

"The week is a call on all of us to clean the Mother Earth, to clean our minds, to clean our actions so that everything we have is in line with what God asks us," Prince said.

Scientists and other experts have warned that the world is struggling with global warming, water pollution and ocean acidification, and the loss of biodiversity. Advocates for the environment said anyone can take action to care for the planet and the work they joined on World Environment Day can begin to make a difference in addressing pollution.

Isaiah Kilerai, an environmental advocate from the Catholic University of Eastern Africa in Nairobi, said his actions in the park reminded him and other young people of their responsibility to protect the earth. 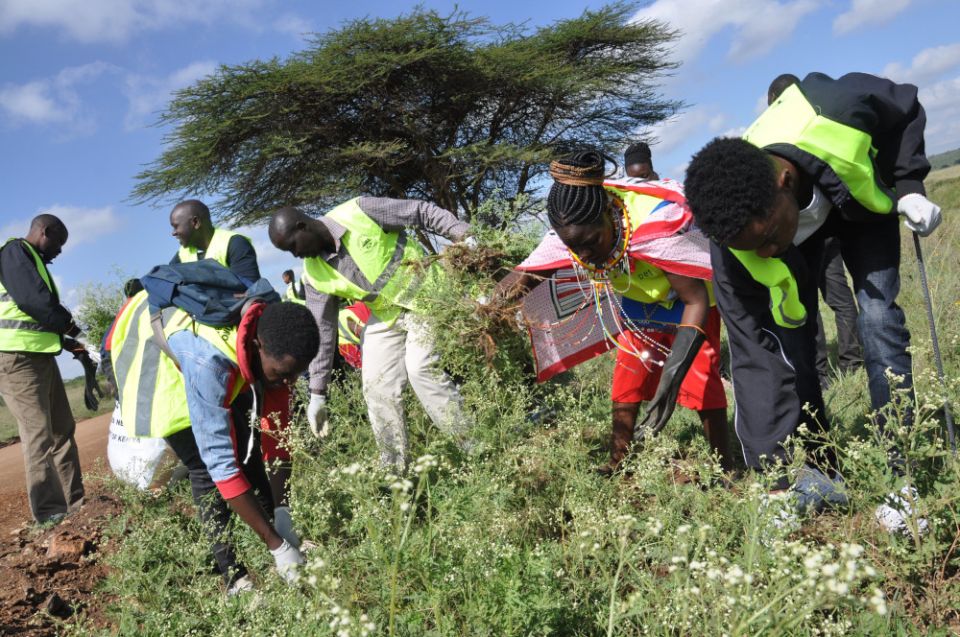 Members of the Laudato Si' Movement and others pull out weeds at the Nairobi National Park in Kenya June 4, 2022, as part of World Environment Day cleanup. (CNS/Fredrick Nzwili)

"We only have one earth as our home, which we are called to protect. There are several issues which we need to tackle, but I think plastic waste is the most troubling. For me, it is the biggest crisis in the world today," Kilerai said.

In Kenya, the Laudato Si' Movement partnered with organizations and individuals involved in recycling various types of waste materials to create reusable products.

Elsewhere, the Zambia chapter of the movement organized television shows to sensitize the public on issues of environmental protection. In Burundi, Laudato Si' Movement activists joined with Caritas Burundi and the country's Catholic bishops to clean parishes.

And Catholic activists and environmental conservationists in Uganda continued a campaign to stop construction of a 900-mile pipeline carrying oil from the country's oil fields to an Indian Ocean port in Tanzania. The activists said a leak in the East African Crude Oil Pipeline would gravely harm eastern Africa's environment, wildlife and water sources and damage the livelihoods of local communities.

Catholic bishops in Uganda planned to discuss the pipeline during a meeting later in June.

Bishop Robert Muhiirwa of Fort Portal, Uganda, vice chairman of the Uganda bishops' conference, said the matter was important enough for the bishops to address, The Independent magazine reported. He said Francis' encyclical would guide the bishops' discussion.

Read this next: Young Africans engage in local and global climate conversations through Catholic youth network