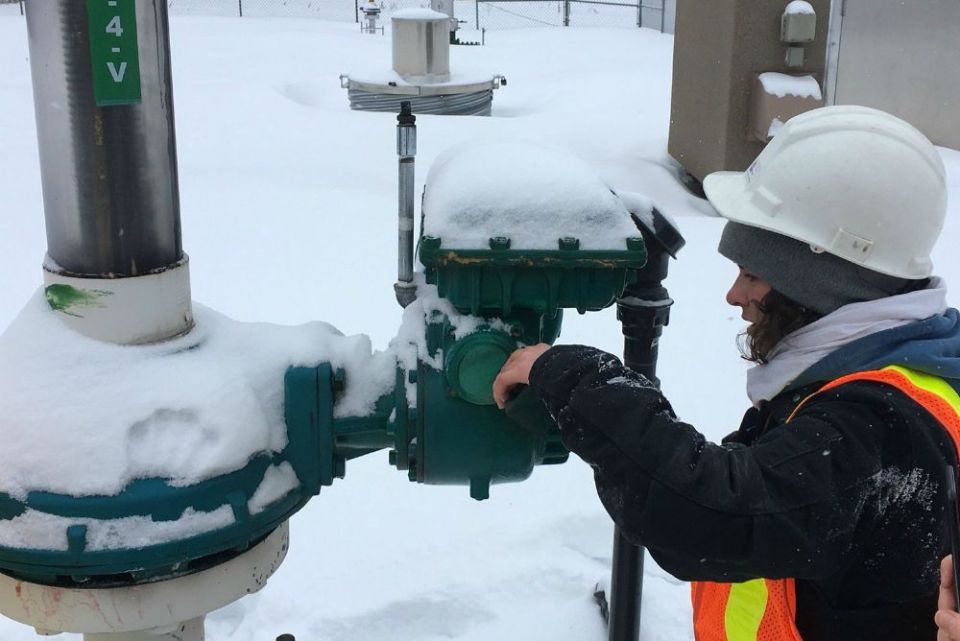 Allyson Polman, a Catholic Worker from Denton, Texas, attempts to shut off a valve for an oil pipeline operated by Enbridge Inc. at a valve site in Itasca County, Minnesota Feb. 4. (Courtesy of Four Necessity)

Four Catholic Workers were charged with property damage after they attempted earlier this week to shut off valves on a northern Minnesota pipeline as part of a non-violent action to curtail "the imminent and irreversible damage being done to the climate" by the fossil fuel industry.

The group, calling themselves the "Four Necessity Valve Turners," appeared Wednesday in Itasca County District Court, in Grand Rapids, Minnesota. Two days earlier, they were arrested after they broke into a fenced valve site and attempted to turn off emergency shut-off valves for two pipelines operated by Enbridge Inc., a Canadian energy company that operates an extensive network of more than 200,000 miles of crude oil and natural gas pipelines across North America.

One of the pipelines targeted was Line 3, which has been a focal point for environmental demonstrations since an extensive renovation project was announced that would increase the amount of tar sands oil — which emit greater amounts of greenhouse gas emissions than typical crude oil — the pipeline could transport.

#BREAKING: More #ValveTurners are out! Brenna Cussen Anglada has been released on her own recognizance. THANK YOU BRENNA -- WE LOVE YOU!! 🕊️🌎💚 #4Necessity #ActOnClimate #GreenNewDeal pic.twitter.com/7Ps6RtEO9Z

All four were released under their own recognizance. The next court date is set for Feb. 19.

In a Feb. 4 press release, the members of the Catholic Worker movement said they acted "in solidarity with the most vulnerable worldwide who suffer the great impact from climate change. The Four Necessity Valve Turners believe it is time to take personal responsibility for preventing the dangerous expansion of the oil industry, because governments and regulators have failed to do so."

Added Naar Obed, "This small act of healing our earth is riding on the wings of all the ancestors, angels, saints, and cloud of witnesses who will continue these efforts by changing hearts and minds allowing for sustainable, livable, and just technologies for the good of all."

Around noon on Feb. 4, the Valve Turners used bolt cutters to enter the valve site. Before attempting to shut off the valves themselves, they said they contacted Enbridge as a safety precaution and also offered the company a chance to close the valves on its own. As they worked on the valves in several inches of snow, the group sang hymns, placed sacred items around the site such as palms and rosaries and hung a banner reading "The time is now for unprecedented and urgent action" — a reference to a report from the United Nations' Intergovernmental Panel on Climate Change on global warming of 1.5 degrees Celsius.

Released in October 2018, the IPCC report stated that a "rapid and far-reaching" transformation of the global economy was necessary to limit warming to 1.5 C, a point the world is on track to reach within the next two decades, and at which the most dangerous impacts of climate change would become far more severe, particularly for poor and vulnerable communities.

The Valve Turners livestreamed the action to their Facebook page, though it has since been removed by Facebook. Portions of the video were later posted on other social media platforms.

In the video, the Valve Turners said that Enbridge remotely shut down one of the valves they targeted. In a statement, Enbridge did not address whether a valve was turned off, saying only that the group's "reckless and dangerous" pipeline tampering "did not result in the release of any product."

"The people involved claimed to be protecting the environment, but they did the opposite. Their actions put themselves, first responders, neighboring communities and landowners at risk. While, we respect the rights of individuals to safely express their views on the energy we all use, we take these matters very seriously and support the prosecution of all those involved," the Calgary, Alberta, company said.

Leutgeb Munson told NCR that the Valve Turners "have certainly taken action that may look dramatic, but really in the grand scheme of things, dramatic times call for a dramatic response, and we aren't seeing that from other government and regulatory bodies."

For the past year, Enbridge has been the focus of numerous protests since it proposed its Line 3 project, a $2.9 billion effort to replace 364 miles of pipeline transporting Canadian tar sands oil across three U.S. states. Construction on the Line 3 project was expected to begin early this year, with service to start later in 2019. 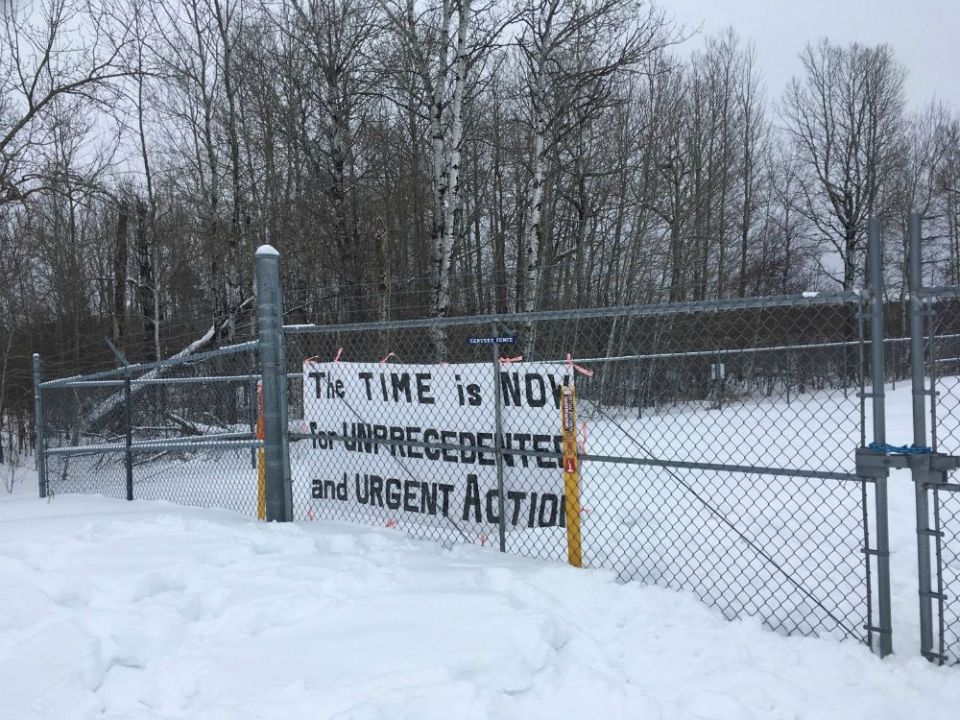 Four Catholic Workers hung a banner calling for "unprecedented and urgent action" on climate change hangs on a fence of a valve site for energy company Enbridge Inc. in Itasca County, Minnesota, where they attempted to turn off valves for several oil pipelines. (Courtesy of Four Necessity)

Two months before its approval in June 2018, participants at a Catholic Worker retreat staged a demonstration at a pipeline storage facility in Carlton County, Minnesota, with 27 people risked arrest for trespassing. The Catholic Workers and other activists have argued that in addition to contributing to climate change, the project endangers lands sacred to local indigenous people.

In August 2018, the Fond du Lac Band of Lake Superior Chippewa reached an agreement with Enbridge that allows the company to lay new pipeline on its land in exchange for the route avoiding wild rice lakes that Anishinaabe people consider sacred and where they have treaty rights to fish, gather and hunt.