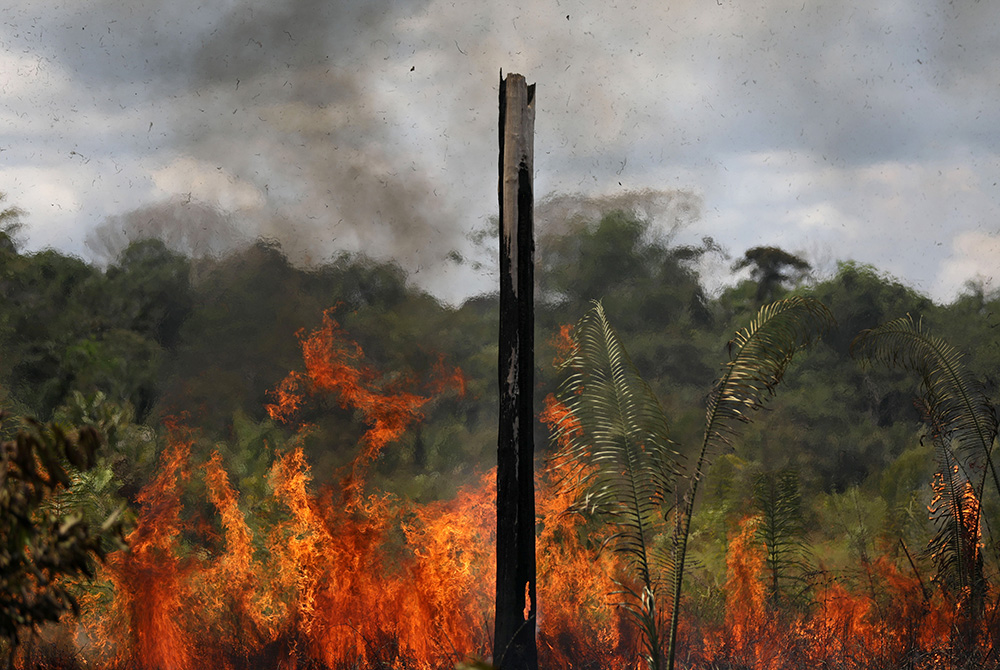 Smoke from a fire rises into the air as trees burn in the Brazilian Amazon rainforest Sept. 1 near Labrea, Brazil. (CNS/Reuters/Bruno Kelly)

As a great wildfire threatened to engulf the village of Forte Coimbra, a district of the city of Corumbá on the border between Brazil and Bolivia, community leader Edir Silva gathered a few neighbors and took the 200-year-old statue of Our Lady of Mount Carmel out of the local chapel.

"I lifted up our mother, our patroness, in the middle of the street and called out to her, 'Our Lady, you stopped two wars at this place. Please turn the wind in another direction.' We all prayed together amid those strong winds of fire," Silva said.

Born and raised in the village adjacent to a 246-year-old military fort where Brazilian troops fought Spanish and Paraguayan soldiers in 19th-century battles, Silva said the saint had saved the district from a wildfire before, five years ago. On Sept. 7, she said, the Virgin Mary protected the place once again.

"As soon as we begged for her help, the winds began to blow in another direction and the fire went away," Silva told EarthBeat. 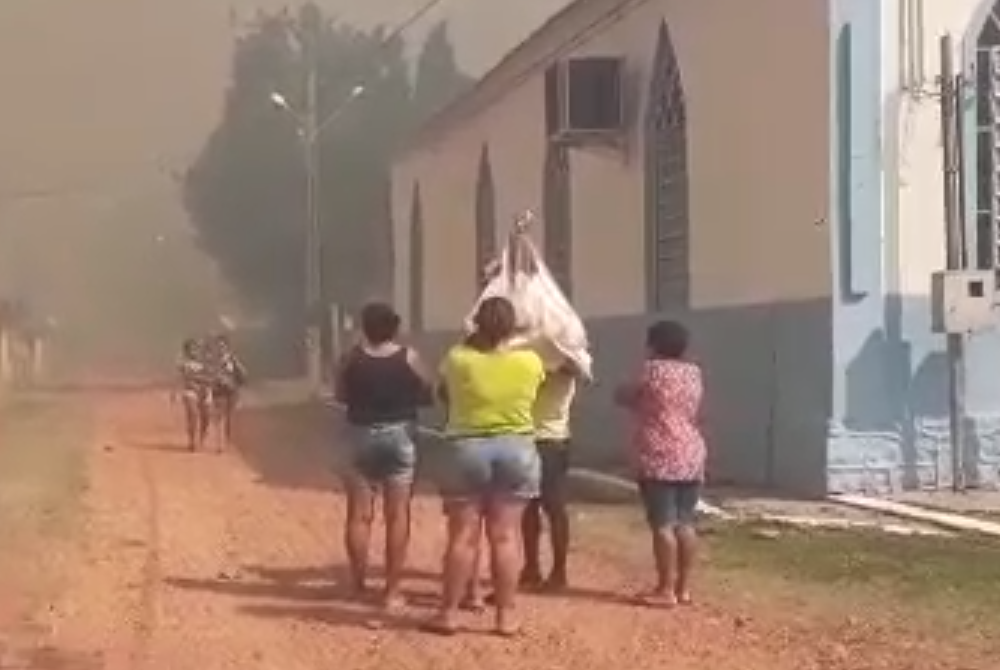 Community leader Edir Silva and others removed a 200-year-old statue of Our Lady of Mount Carmel out of their local chapel Sept. 7, as a wildfire threatened to engulf the village of Forte Coimbra, a district of the city of Corumbá. "As soon as we begged for her help, the winds began to blow in another direction and the fire went away," Silva told EarthBeat. (Courtesy of Edir Silva)

Although fires near Forte Coimbra were extinguished after burning for four days, major wildfires continue to sweep through Corumbá and other parts of the Pantanal, the world's largest tropical flooded grasslands. Encompassing a swath of central Brazil and parts of Bolivia and Paraguay, the Pantanal covers an area nearly the size of Washington state.

Because of an exceptionally severe dry season in 2021, thousands of wildfires are also devastating other important biomes across Brazil, including the Amazon. Catholic organizations have been denouncing not only the worrisome environmental destruction and its impacts on people, but also the underlying causes, mainly activities like mining and the expansion of industrial-scale agriculture.

According to the Instituto Nacional de Pesquisas Espaciais or INPE, the governmental space research agency that also monitors wildfires, the Atlantic Forest along the Brazilian coast, the Caatinga dry forest in northeastern Brazil and the savanna known as the Cerrado have seen an increase in the number of fires in the first eight months of this year.

In the Amazon, fewer fires have been reported so far this year than in previous years, but the total remains high. INPE reported 28,060 wildfires in August, the third-highest number for that month in 11 years, eclipsed by only 2019 and 2020.

"The water crisis has been a central problem," said agronomist Ima Guimarães Vieira, a researcher at the Emilio Goeldi Museum in Belém and an adviser to the Catholic Church's Pan-Amazon Ecclesial Network. "In the eastern Amazon we have seen two prolonged periods of drought, and we know there is a great interaction between climate, rain and wildfires."

Those factors have combined in central Brazil, where large portions of the Pantanal and the Cerrado are burning. 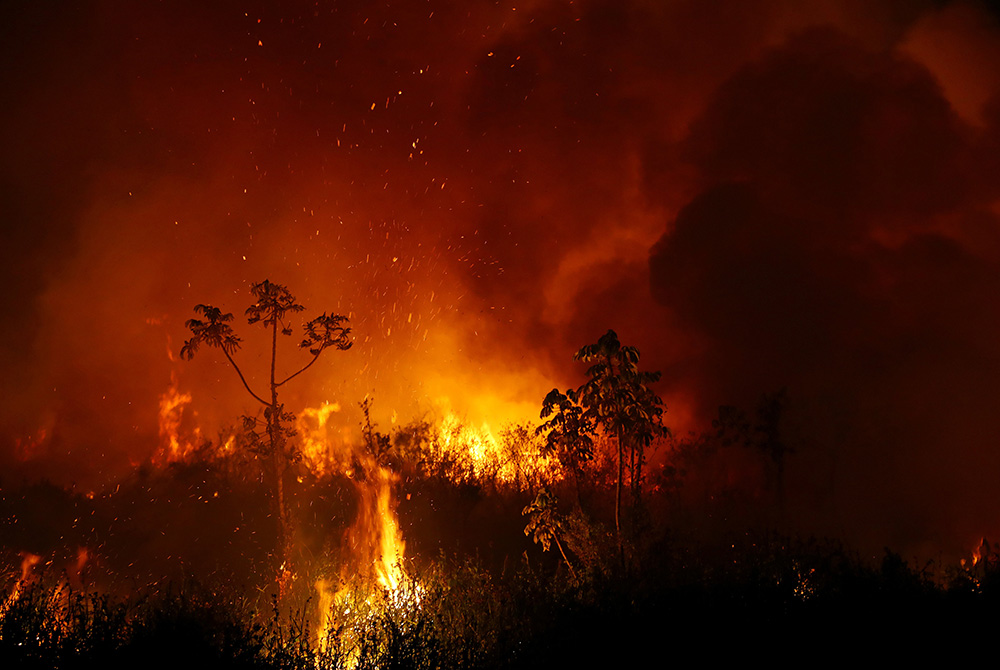 Smoke from a fire in Pocone, Brazil, rises into the air Sept. 3, 2020, as trees burn among vegetation in the Pantanal. (CNS/Reuters/Amanda Perobelli)

"We have been facing a serious drought for longer than in past years. We also have had two frosts that dried up the vegetation," Valdevino Santiago, a member of the regional coordinating group of the Brazilian bishops' Pastoral Land Commission, told EarthBeat.

According to Santiago, those were the first frosts in the south-central state of Mato Grosso in years. In his home city of Anastácio, in a transition zone between the Cerrado and the Pantanal, "the grass is so dry that it became the perfect fuel for wildfires," he said.

Bishop João Bergamasco of Corumbá noted that below-average rainfall in recent years has left the Paraguay River at historical low levels this year.

"Things will get even worse because heavy rains won't appear before October. Wetlands that have been dried up favor wildfires," Bergamasco said.

This is the third year in a row that the Paraguay River has failed to flood the Pantanal. Scientists debate whether the lower water levels in that river and other major tributaries of the Río de la Plata, such as the Paraná River, are a result of La Nina, climate change or human activities like dam building. Many blame a combination of those factors.

Wildfires can occur naturally, especially in the Cerrado, but most fires are set after people cut down trees to clear land for agriculture or ranching.

"Those fires are the product of criminal actions. People first illegally collect all the valuable timber during the night. Then they set the rest on fire to clear the area. After that, they plant grass," said Ronilson Costa, a national coordinator of the Pastoral Land Commission.

"What used to be part of the rainforest becomes pasture. Later, a monoculture — like soy or maize — is introduced," he added.

Brazilian agribusiness uses modern technology, but remains archaic in its structure, Costa said. Instead of increasing efficiency per acre, farmers simply push deeper into the Amazon or Cerrado.

"Big farms are incapable of producing in Brazil without generating devastation. Agribusiness need vast extensions of land," he said.

In the Amazon, illegal miners who invade public lands and Indigenous reserves also set fires to clear the terrain.

In such invasions, heavy — and expensive — equipment, like tractors and bulldozers, are frequently seen by monitoring agents. The miners actually doing the work in those areas are cheap labor hired by powerful outside business interests, Vieira told EarthBeat.

"Those people wouldn't have the means to invest in such operations. It's necessary to identify and hold accountable the ones who are behind them," she said.

With so many interests involved in the devastation of ecosystems in Brazil, the church struggles to address the situation.

"In our diocese, I feel frustrated in regard to Laudato Si'. Of course, we try to guide people towards preservation. But how can I tell a miner to give up his work if I can't provide him with his daily bread?" asked Bishop Antônio Fontinele de Melo of Humaitá, in Amazonas state.

The area around the nearby city of Lábrea has registered the most fires this year.

De Melo told NCR that poor people in the region have few options for earning a livelihood and often engage in illegal logging and mining.

"Public policies that could help them have been totally paralyzed. What the church can do is only a drop in the bucket. Without governmental investment, people will keep devastating the forest," he argued. 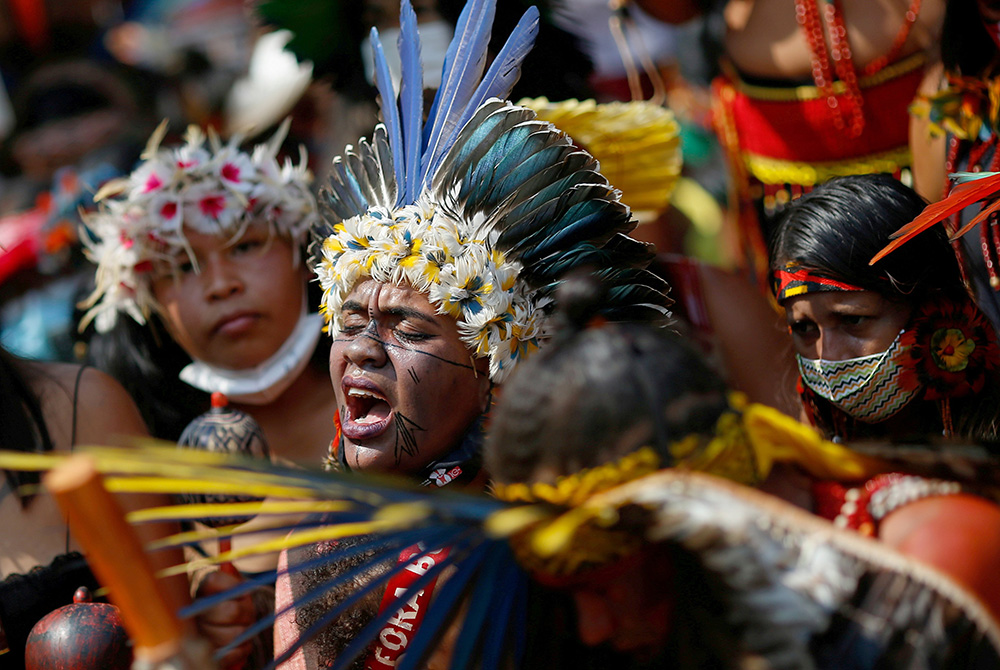 Costa stressed that President Jair Bolsonaro's administration not only does not have an environmental agenda but also has been encouraging devastation.

"The government is working together with most of the Congress in an anti-environmentalist, anti-Amazon, anti-Indigenous and anti-land reform agenda," he said.

Indigenous territories and lands granted to small growers traditionally serve as buffers against the advance of deforestation, Costa explained. But since Bolsonaro took office in 2019, the number of incursions into protected areas grew exponentially, he added.

Since the presidential campaign, Bolsonaro has stated several times that he would not grant more lands to Indigenous and other traditional peoples. He also declared on many occasions that he thinks those territories should be opened to mining and other extractive industries.

"The government incentivizes invasions and thus thousands of miners have been consuming lands and contaminating water streams. Wildfires are consuming what is left," Roberto Liebgott, a coordinator at the Brazilian bishops' Indigenous Missionary Council, known as CIMI, told EarthBeat.

To further complicate the situation, the government stopped investing in monitoring, and its environmental and Indigenous protection agencies have been weakened, he added. 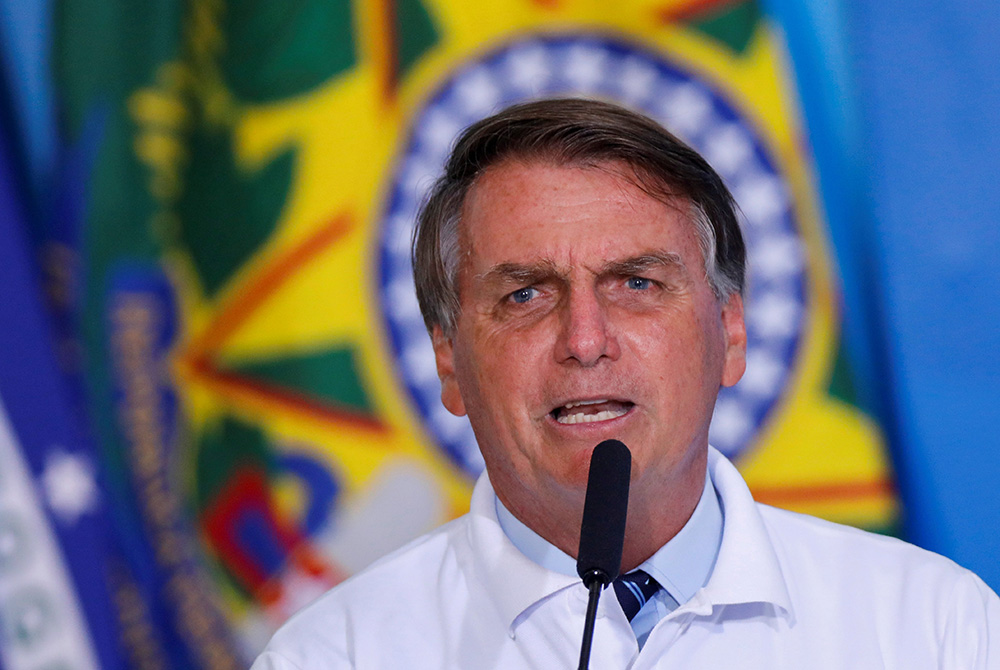 Brazilian President Jair Bolsonaro speaks during a ceremony at the presidential palace Jan. 12 in Brasilia. Nearly 400 Brazilian religious leaders, including many prominent Catholics, have asked the Chamber of Deputies to impeach Bolsonaro because of his handling of the COVID-19 pandemic. (CNS/Reuters/Adriano Machado)

One of the most serious propositions is the Bill 490, which was introduced in 2007. It would transfer the power to grant land rights to Indigenous peoples from the president to Congress and establish that Indigenous groups are only entitled to territories they were occupying in 1988, when the current constitution was approved.

CIMI and other organizations have criticized that provision, known as the "time-frame thesis," as unconstitutional and unfair, since many Indigenous groups have been violently displaced from their traditional territories.

The Supreme Court is currently considering the legality of the time-frame thesis, a ruling will affect the future of Bill 490. Between mid-August and Sept. 12, thousands of Indigenous people with support from religious leaders camped and protested in Brasilia to urge the court to reject the argument. The justices have not issued a final ruling.

Other legislation introduced in Congress by lawmakers connected to agribusiness are aimed at making it easier to get legal title to lands invaded illegally, said Costa, who added, "This will certainly increase deforestation."

Although the Brazilian church has made a crucial contribution to the struggle for environmental protection and land rights through its land and Indigenous ministries, he said, "a large part of the church rejects the involvement of pastoral ministries in such issues."

The Synod of Bishops for the Pan-Amazon Region, held in 2019 at the Vatican, played a key role in making church people understand the importance of protecting Brazil's biodiversity, he added.

For Bergamasco, Catholics must continue those efforts, despite all adversities.

"These are slow processes," he said. "Environmental education is something that takes a while. But we cannot give up."