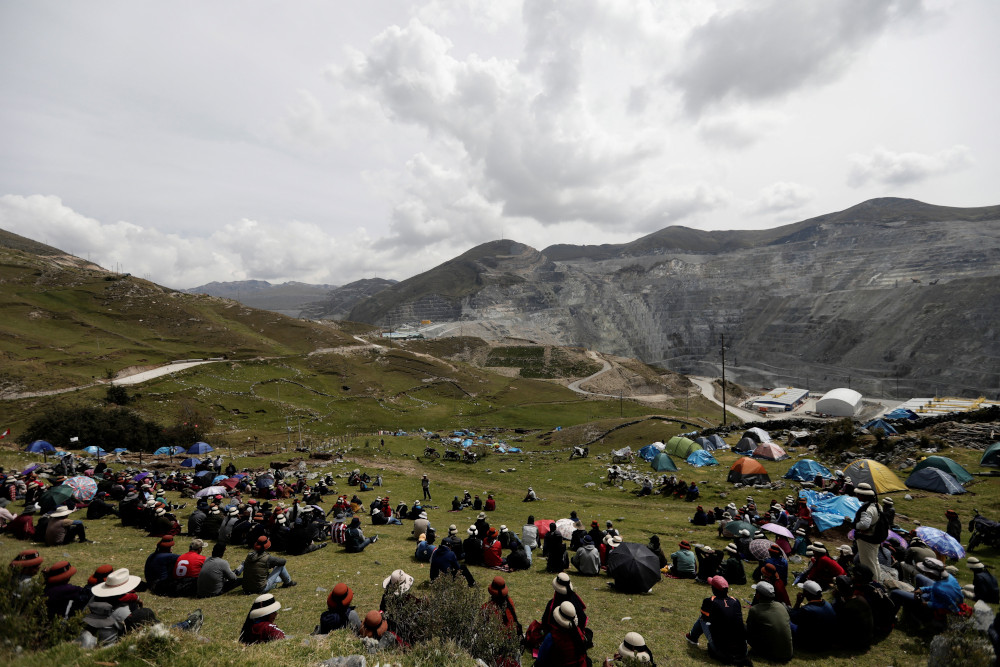 Amid conflicts between mining companies and communities in Latin America, Catholics must stand with people whose lives and livelihoods are threatened by pollution and human rights violations, church workers said.

Communities affected by mining — and church people working with them — draw strength from spiritualties that center on protecting what Pope Francis calls "our common home," according to members of the Churches and Mining Network, who met here April 24–28.

The gathering brought together 40 people from Argentina, Bolivia, Brazil, Chile, Colombia, Ecuador, Guatemala and Peru, as well as France, Germany and Switzerland.

When Latin American countries locked down during the coronavirus pandemic, mines in many countries continued to operate, often exacerbating conflicts with local communities, network members said at a public presentation April 27.

And both the war in Ukraine and the demand for minerals for new energy technologies, like solar and wind, are likely to increase pressure for mining in the future, leading to greater tensions with communities, said Fr. Dario Bossi, provincial of the Comboni Missionaries in Brazil and a coordinator of the network.

"How much more is it going to advance this way, or worse? We've seen that in times of pandemic and war, instead of decreasing, (mining) is expanding. The increase in conflicts and deaths is precisely because it is reaching the limit," he said, adding that the conflicts are "a sign that we're out of time."

The conflicts take various forms around the region.

In Brazil, where the collapse of tailings dams in 2015 and 2019 at mines owned by the Vale mining company caused environmental destruction and killed hundreds of people, victims are still awaiting reparations and communities feel left out of negotiations, said Franciscan Br. Rodrigo Péret.

In the southern Argentine province of Chubut, the British-based Anglo American PLC plans to mine one of the world's largest silver deposits are going ahead, despite opposition from local communities, said Claudia Huircan, who coordinates the Claretian Missionaries' program for justice, peace and integrity of creation in Argentina, Chile, Uruguay and Paraguay. 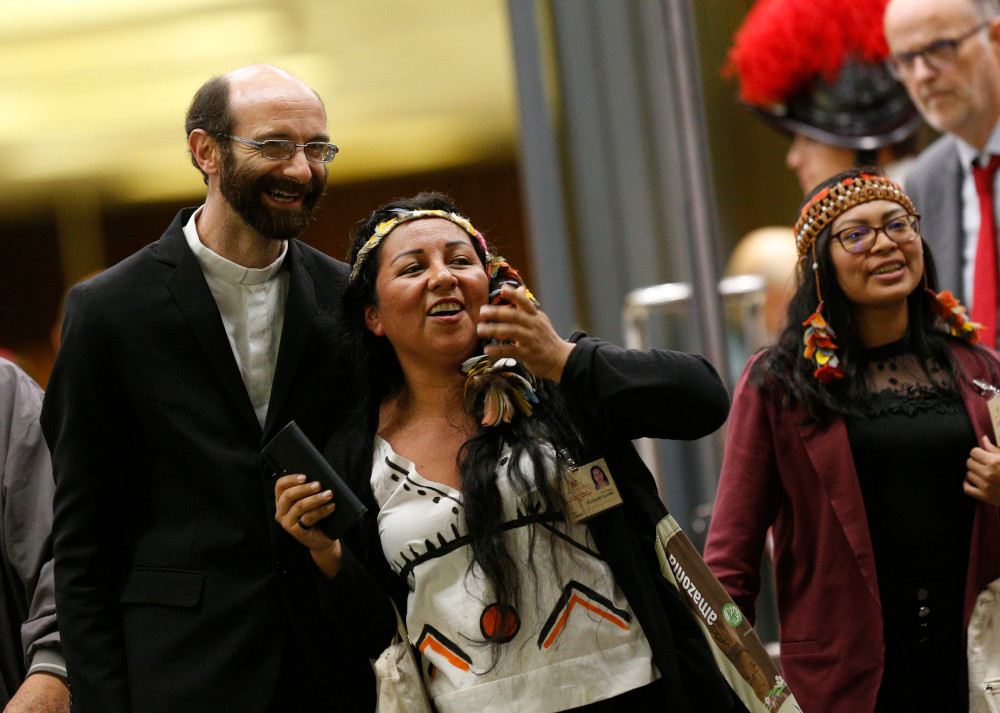 Fr. Dario Bossi, provincial superior of the Comboni Missionaries in Brazil, Patiachi Taylor and Leah Rose Casimero leave the final session of the Synod of Bishops for the Amazon at the Vatican Oct. 26, 2019. Fr. Bossi recently said Catholics in the United States can help people affected by mining by boycotting products from companies whose practices result in environmental damage or human rights violations. (CNS/Paul Haring)

The exploration affects sites considered sacred by Indigenous Mapuche communities, she said, and "defenders of our common home and Mother Earth" who oppose the project are branded as criminals.

That is a common complaint in communities affected by extractive industries in what has become the deadliest region for defenders of the environment and community territories, according to the watchdog group Global Witness. Three-quarters of the 227 murders the organization registered in 2021 were committed in Latin America.

Latin America plays a key role in providing the world with minerals, César Padilla of the Chile-based Observatory of Mining Conflicts in Latin America said via a virtual connection during the April 27 presentation. Chile and Peru lead the region, especially in copper production, but other countries are also important, such as Bolivia, a major producer of the lithium used in electric vehicle batteries.

"We are victims of this abundance," Padilla said. "The most serious problem is that the abundance leads to a narrative that equates extractive industries with wealth and well-being."

Although mining has increased overall revenues in many Latin American countries, contributing to lower national poverty rates, the benefits have not trickled down to many of the communities closest to mines in places like the Andes Mountains. 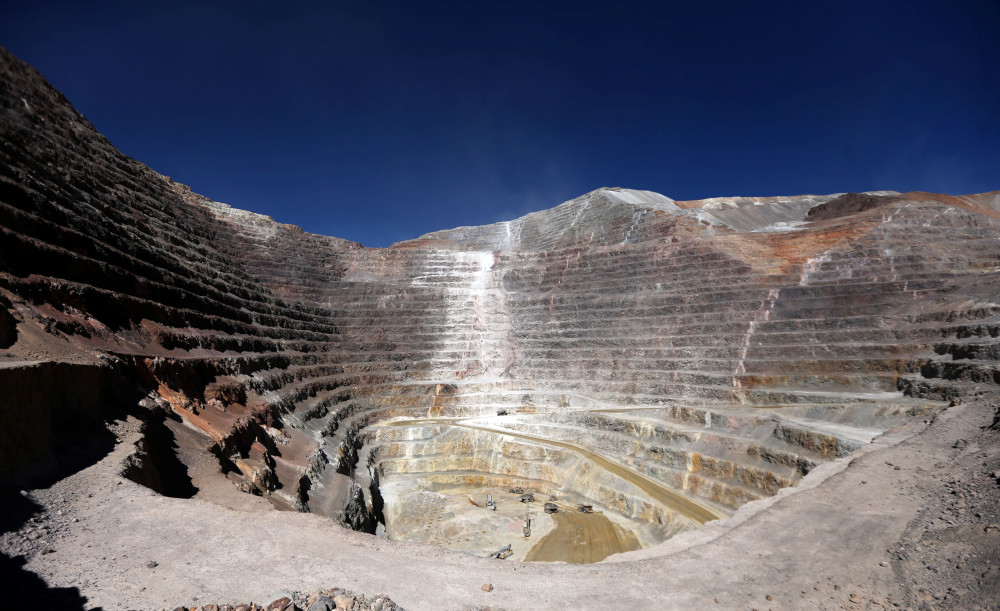 In Cajamarca, the area of Peru that is home to one of the region's richest gold mines, two out of every five people live in poverty, according to official figures from 2020. In Huancavelica, a mining center since colonial times, the number is closer to one in two.

Virtually all new mining projects in the region are accompanied by conflict, Padilla said, as governments grant companies concessions in areas that include communities, leading to protests followed by crackdowns by security forces.

Governments continue to focus on extraction of natural resources, which remains the main source of revenue for many Latin American countries, rather than giving priority to ensuring benefits for communities, he added.

Such extractivism is an effort to "convert nature into money," Fr. Bossi said. "What we need is another kind of conversion."

Communities are asking for churches to be allies, and Latin America's Catholic bishops have said that evangelization implies caring for creation, Fr. Bossi said. Although the church is often asked to be a "conciliator" in conflicts, that is not its role, he added. Instead, it must take the side of victims in unjust situations.

Catholics in the United States can help in that effort by supporting policies that protect Indigenous and other traditional communities in places like the Amazon Basin and boycotting products from companies whose practices result in environmental damage or human rights violations, Fr. Bossi told Catholic News Service.

He stressed "the urgency of raising a voice from outside, because of so many cases of criminalization, death and silencing of people who defend their territories. We need international indignation about what is happening in Latin America. That has worked in many cases. We ask Catholics to join us in speaking out.