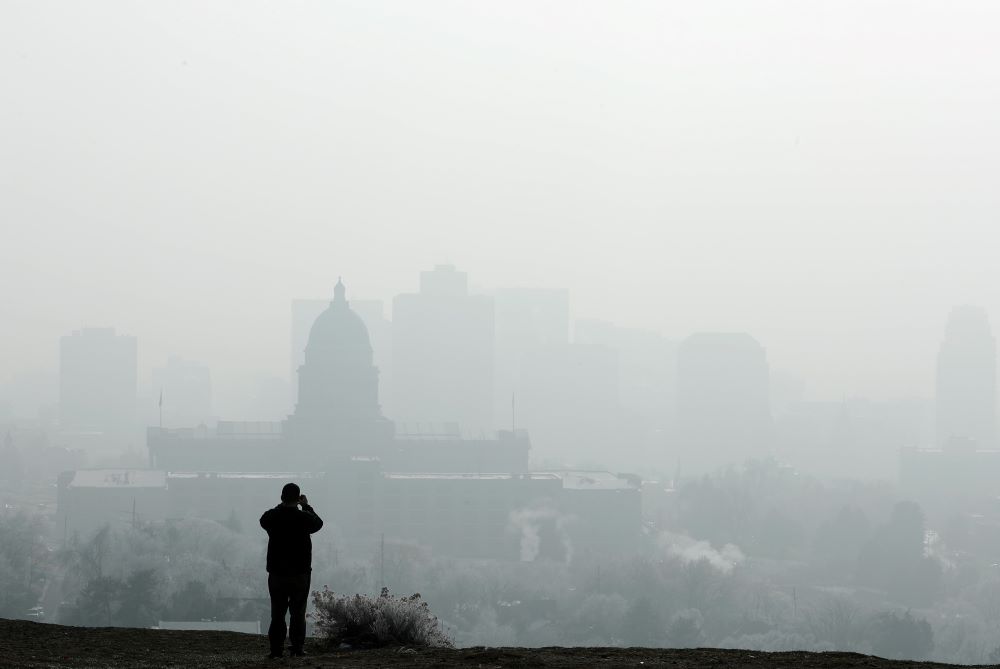 It's not difficult for Don Brown to detect when the air quality drops in Columbus, Ohio.

His body has plenty of ways to tell him.

The retired 70-year-old suffers from asthma, COPD and sinus problems. High levels of dust and pollutants in the air, as well as fumes from diesel trucks traveling the nearby 71 Freeway in his south Columbus neighborhood, make breathing difficult. So too do high pollen and mold levels and the heavy, suffocating humidity that accompanies Ohio summers.

"When they issue an air quality alert, I batten down the hatch," Brown said.

A former sheet metal mechanic and plumber and current member of Genesee Avenue Church of Christ, Brown has battled asthma all his life. But it's been most pronounced during his days in Columbus. He grew up in the Ohio capital, and after serving in the military, moved to southern California in the early 1970s, where he found himself breathing much easier as he lived near the beach. When he moved back to Columbus in 1999 to assist his mother, his asthma also returned.

"I thought I outgrew it," he told EarthBeat. Shortly after returning to the region, located in one of the nation's two "asthma belts," he was in the hospital for treatment. Now he uses three inhalers each day.

Brown's story was one of hundreds describing environmental challenges in Columbus that was shared as part of listening sessions held over the past year by B.R.E.A.D., or Building Responsibility Equality and Dignity, a faith-based community organizing coalition of 44 religious congregations.

Each year, B.R.E.A.D. takes the lead from its members about what issues to try to address in their community, whether elder care, gun violence or affordable housing. In November, they voted to focus on environmental justice, and with it, air pollution. One solution they're supporting is protecting and expanding the metro region's tree canopy. 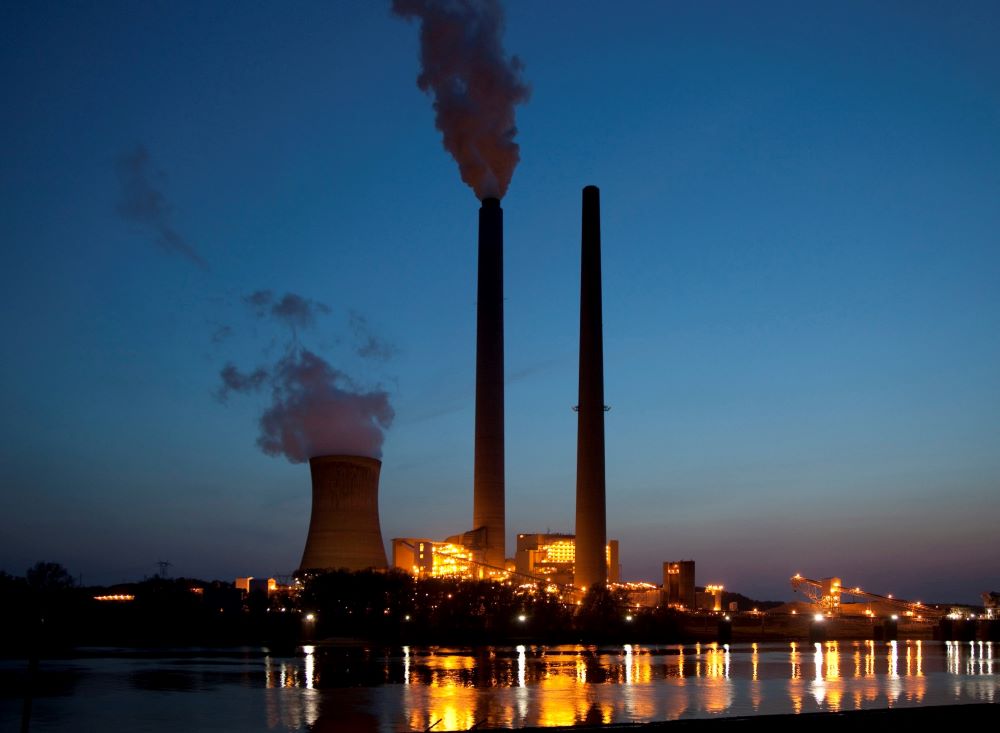 B.R.E.A.D. is also a partner organization of the DART Center that is benefiting from a $500,000 grant to address climate change impacts awarded by the U.S. bishops' conference's Catholic Campaign for Human Development.

Cities like Columbus have sought solutions to clean the air above their skylines. One of the biggest tools at cities' disposals has been the Clean Air Act, the nation's first federal air pollution law passed in 1970. More than 50 years later, the regulations continue to have an impact, according to a recent working paper by Georgetown University researchers.

The study, published in May through the Grantham Research Institute on Climate Change and the Environment at the London School of Economics, looked at the latest air quality standards under the Clean Air Act that came into effect in 2005. Those standards sought to regulate levels of fine particulate matter, called PM 2.5 — essentially small dust particles in the air often generated from burning fossil fuels, whether gasoline in vehicles or coal-fired power plants. The particles are small enough that they can get deep into a person's lungs and at times the bloodstream, causing adverse health effects.

The Georgetown study found that enforcement of the PM 2.5 standards by the U.S. Environmental Protection Agency contributed to a 3% reduction in fine particulate matter concentrations nationwide within the standard's first five years. While that percentage may seem small, such a change in a short period of time is "significant and substantial," said lead researcher Lutz Sager, an assistant professor at Georgetown's McCourt School of Public Policy.

"These latest rules for fine particulate matter, which are really some of the most harmful types of pollution, seem to have, seem to bite and actually be effective at improving air quality in measurable ways," he told EarthBeat.

Sager cautioned that all improvements in air quality shouldn't be attributed to the Clean Air Act standards alone, and that other factors like improvements in industrial efficiency play a role and that more polluted areas tend to show improvements over time even absent regulations.

The study also showed promising results in terms of who's exposed to air pollution.

"It's been shown again and again that there's quite strong disparities in the different levels of our air quality or air pollution that different parts of the country and different segments of the population face," Sager said.

Often, it has been low-income communities and areas with higher concentrations of Black, Latino and Asian residents who have been exposed to the highest levels of pollution. A recent study, as reported by The New York Times, found that historically redlined communities — ones deemed as risky investments for developers under federal policy guidelines from the 1930s — still face far higher levels of pollution and are more likely to be located near industrial complexes and highways.

The Georgetown study found positive, albeit incremental improvements, from the 2005 Clean Air Act standards in helping close the pollution disparity gap between Black Americans and white Americans, narrowing by nearly 70% from the 2001–2003 period to 2011–2013 with the research attributing a substantial portion to the standards. Progress was also seen in the rural-urban pollution gap, and the study also showed that improvements in air quality tend to have a positive effect on home values, with house sale prices increasing 1% with every 1% reduction in fine particulate matter concentrations.

"It's I think encouraging to see that these PM 2.5 rules, the latest ones, seem to have at least some positive impact," Sager said. 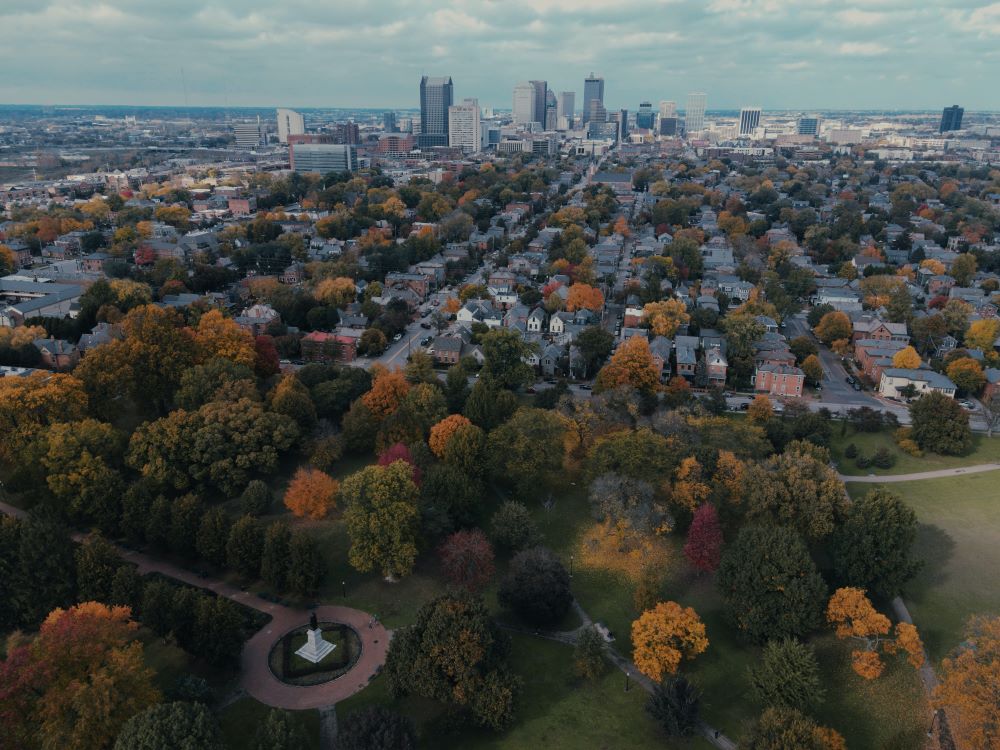 Such findings are positive steps forward in communities like Columbus, which was one of the regions with high PM 2.5 levels before the 2005 Clean Air Act standards. B.R.E.A.D. has engaged local civic leaders there in ways to further improve air quality and address environmental justice issues in the city.

One strategy focuses on trees. The presence of trees in a neighborhood helps in numerous ways, including reducing the impact of extreme heat and assisting in mitigating flooding. Trees also improve air quality by absorbing pollutants from the air and by reducing temperatures, and with it, emissions levels from often-polluting energy sources.

In addition to encouraging city officials to expand tree coverage in disadvantaged communities, B.R.E.A.D. has pressed them to also pass regulations to protect existing trees on private property, which account for approximately 70% of trees in Columbus, from being torn down by developers in one of America's fastest growing metro areas.

The initiative is welcome news to Brown, who says there's limited tree cover and few green spaces in his low-income neighborhood. And when trees are cut down, new ones rarely are planted.

He hopes the city's urban forestry master plan will help neighborhoods like his with low tree coverage.

"They help absorb water from the ground, they give off a little bit more shade," Brown said. And most importantly, "they give off more oxygen."