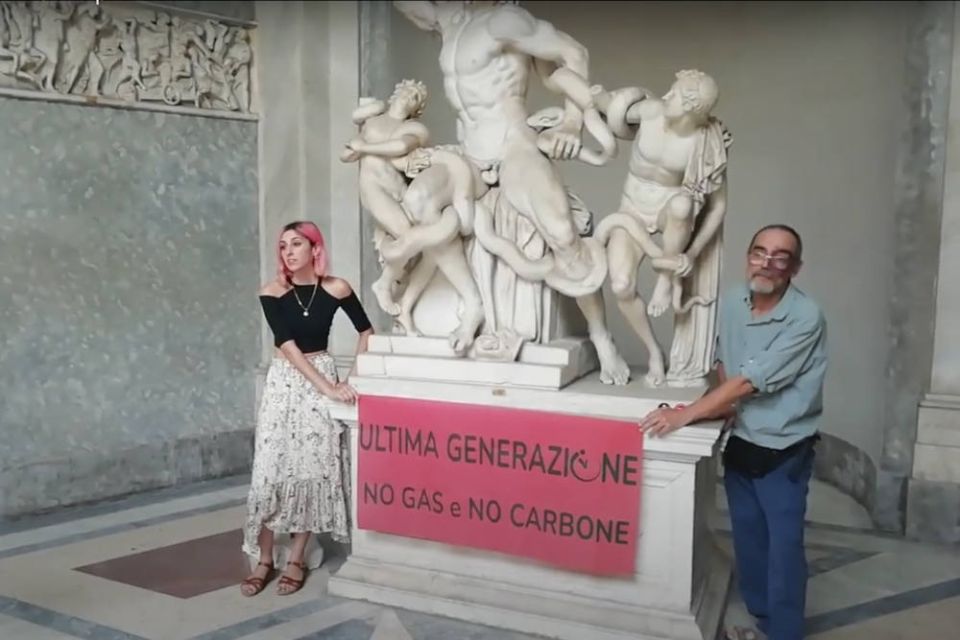 A video grab from a footage made available by environmental activists, shows two members of Ultima Generazione, or Last Generation in English, glued their hands on the Roman statue of Laocoön and His Sons, one of the masterpieces of the Vatican Museums collection, to protest against climate change, Thursday, Aug. 18, 2022. The activists displayed a banner reading, "Last Generation No Gas No Coal" urging politicians to listen to the call from the scientific community and act against climate change. (Ultima Generazione Via AP)

Rome — Italian environmental activists staged a second museum protest in as many months, gluing their hands Thursday to the base of one of the Vatican Museums' most important ancient sculptures, the Laocoon.

The statue wasn't damaged, said the environmental group Last Generation. Vatican gendarmes removed the three protesters and they were processed at an Italian police station. It wasn't clear if Vatican criminal prosecutors would eventually take up the case since they have jurisdiction in Vatican City.

The protesters are demanding the Italian government increase its solar and wind power and stop exploring for natural gas and reopening old coal mines in Italy. They affixed a banner to the statue's base reading "No gas, no coal."

Last month, protesters glued their hands to the glass window protecting Sandro Botticelli's painting "Spring" in the Uffizi Galleries in Florence. In that case, they were detained and ordered to stay out of Florence for three years, Italian media said.

Last Generation said the group targeted the Laocoon statue, which is believed to have been carved in Rhodes in 40-30 B.C., because of the symbolic story behind it.

According to legend and the Vatican Museums' own website, Laocoon warned his fellow Trojans against accepting the wooden horse left by the Greeks during the Trojan War. The group said the climate crisis is the modern-day warning that is being unheeded by political leaders.