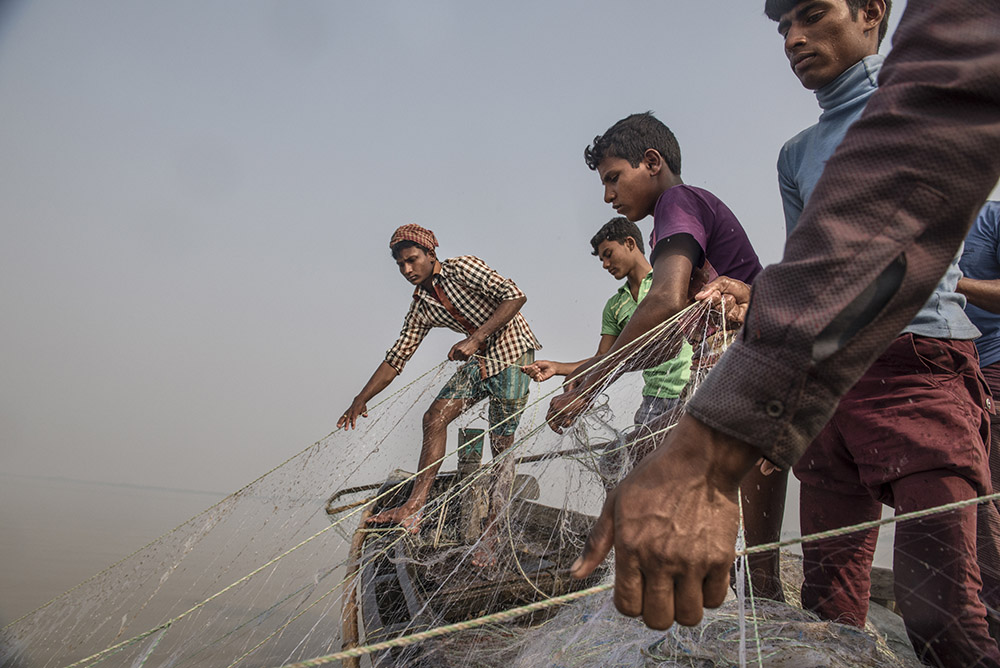 Fishermen cast their nets into the junction between the Meghna River and the Bay of Bengal off Monpura Island in Bangladesh. Since 2014, Catholic Relief Services has run the Mukti Project in the region, which experiences high frequency of weather-related disasters, including almost constant river erosion. (Courtesy of CRS/Ismail Ferdous)

Flooding and extreme storms are an annual threat for many people in Bangladesh.

In November 1970, an estimated 500,000 people died from Cyclone Bhola in what is considered the deadliest tropical cyclone on record.

Since then, climate change has only exacerbated extreme storms in poor nations like Bangladesh, which is considered one of the most vulnerable countries to the impacts of rising temperatures. But as the threats have risen, Bangladesh has also become a global leader in climate resilience. As its government has created a robust disaster preparedness system, so too has it worked with development organizations in advancing farming methods to better withstand stronger storms.

Among them is Catholic Relief Services.

Stories of how CRS is helping communities in Bangladesh adapt to the impacts of climate change are featured this week as part of its annual Rice Bowl program.

Each year during Lent, CRS Rice Bowl invites families and faith communities to offer financial support for people experiencing hunger and poverty around the world. Since it began in 1975, the program has garnered more than $250 million, benefiting more than 100 countries, while a quarter of the funds raised are used to assist communities in the U.S.

In 2021, nearly 12,000 Catholic parishes and schools nationwide took part in the program.

One of the endeavors supported by CRS Rice Bowl is the Mukti Project in Monpura, an island in southern Bangladesh on the edge of the Bay of Bengal. Its location, situated within the Meghna River, places the roughly 120,000 people who live on the mostly rural island at greater risk of storms and flooding that have become more frequent as global temperatures have risen.

The Mukti Project began in 2014 to assist vulnerable households through disaster risk reduction in a region largely overlooked by development activities. CRS has partnered on the project with Cartias Bangladesh, which has had a presence on the island dating back to the aftermath of Cyclone Bhola. Since its start, the project has worked with more 4,000 households and 20,000 individuals in 11 villages, many of whom live in extreme poverty.

"Our goal is to provide support to the most vulnerable households to save their lives and assets from disaster," said Kamal Mostafa, CRS technical adviser for disaster risk reduction and resilience in Bangladesh.

The South Asian country, home to 160 million people, is among the top-10 countries most affected by extreme weather events over the past two decades, according to the Global Climate Risk Index. Flooding impacts approximately 1 million people each year, according to the World Bank, and upward of two-thirds of the country is flooded every three to five years.

The recent adaptation report from the United Nations Intergovernmental Panel on Climate Change found that in 2019 more than 4 million people in Bangladesh were displaced by weather-related disasters. It predicted that sea level rise will lead to increases in water salination, which will decrease the availability of freshwater fish along the country's southwest coast, a problem that particularly hits poor communities.

Efforts by the Bangladeshi government have developed advanced warning systems and cyclone preparedness programs that have minimized death tolls, including training 60,000 volunteers and establishing a network of evacuation shelters. When Cyclone Aman struck in May 2020, 26 people died, and more than 2.4 million others were moved to shelters.

"The loss and damage have been reduced, but it's still not zero," Mostafa told EarthBeat.

Flooding makes farming difficult for many in low-lying areas, as the high tides wash out crops. 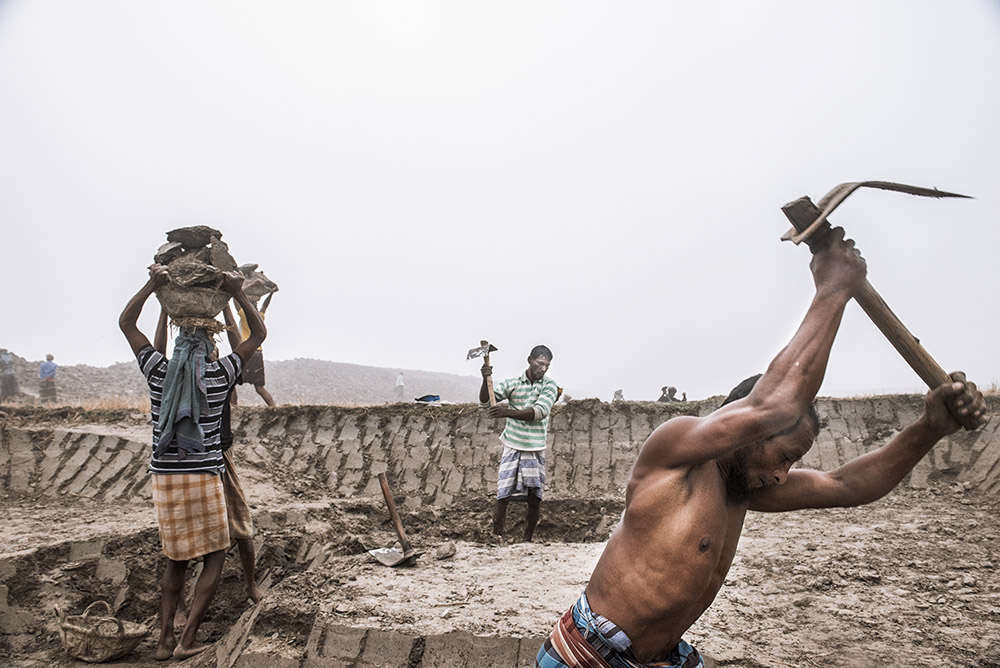 Workers rebuild a piece of low-lying land, or polder, on Monpura Island. Catholic Relief Services' Mukti Project aims to reduce disaster risk by working directly with local communities and empowering them to take action to prepare for disasters themselves. (Courtesy of CRS/Ismail Ferdous)

"Every year during summer, we face many problems, and again during the autumn months, we are hit by a strong storm," said Noornobi, a farmer featured in a CRS video about the Mukti Project.

Over the past eight years, the Mukti Project's team of 35 staffers has worked with farmers to adapt to the changing climate. They have taught methods to raise their garden beds to make their crops more resilient to the strong storms and flooding. They've also taught farming techniques to grow vegetables during the rainy season.

When the Mukti Project began, roughly 7% of households grew their own vegetables at home. Four years into the project, that number grew to 97%. Mostafa said the increase in vegetables doesn't just improve nutrition, but provides a source of income for families year-round and can help families pay for better education.

"This is how they have adapted to the floods," Mostafa said, adding that many farmers like Noorobi have shared what they've learned with others in their community "so that they have food at their table," too.

Along with improving crop production, the Mukti Project has helped communities on Monpura rebuild after weather-related disasters and apply disaster risk reduction strategies ahead of future storms. That has included plinth raising, or elevating homes above flood levels, tying down roofs, vaccinating livestock against diseases accompanying rising waters, and also reconstructed roads and important connections between marketplaces, schools and clinics. It also assists communities in advocating to their government for greater disaster responses and to promote local sustainability efforts. In addition, the Catholic Bishops' Conference of Bangladesh and Caritas Bangladesh have promoted a tree-planting campaign to create a natural buffer from extreme weather and help mitigate rising temperatures by absorbing heat-trapping carbon dioxide from the atmosphere.

Throughout its work, the Mukti Project has placed much focus on working directly with the local communities and empowering them to prepare for future disasters on their own.

Mostafa told EarthBeat he hopes the message participants in the CRS Rice Bowl take from the Mukti Project is that they're helping people in remote communities, who face increasing challenges as floods and cyclones worsen, to ensure they still can provide a meal for their family.

"The support is really changing the life of the people," he said.