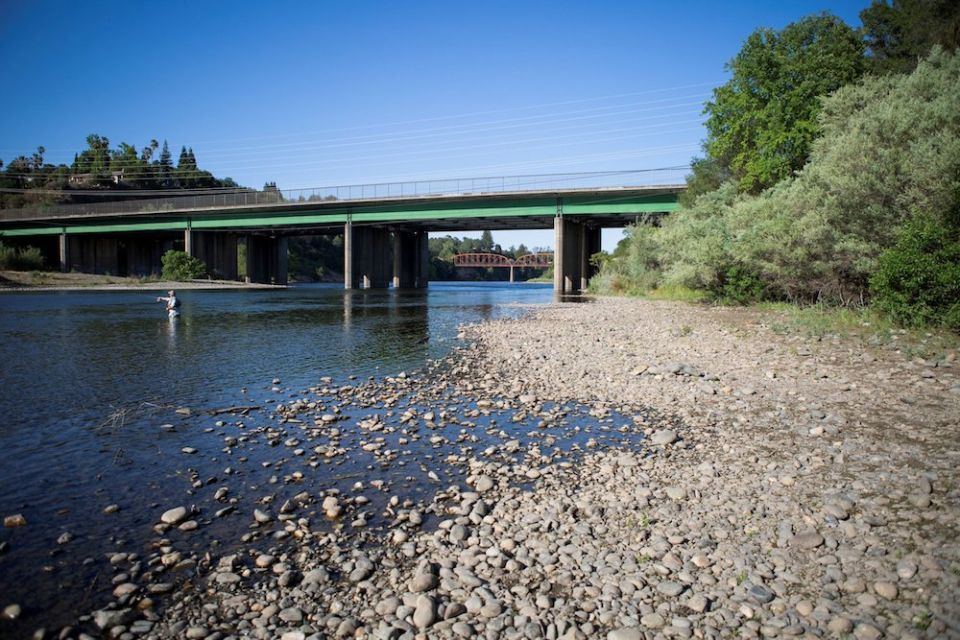 Water levels were low in early May in the drought-stricken American River near Sacramento, California. (CNS photo/Nina Riggio, Reuters)

Washington, D.C. — Faith has taught that water can be powerful, from a baby's baptism to Noah's Ark and the Great Flood.

To millions in the West, a flood is the last thing on their minds right now. The region is experiencing its second drought in a decade, and the severity of the current drought's second year resembles that of the third year of the 2012-16 drought.

The U.S. Drought Monitor, which is updated weekly, puts 84% of the West in drought, with 47% in the most extreme drought status.

Some of California's most parched areas run along its border with Nevada. On the Nevada side of the border, Lake Mead — the reservoir created by the building of Hoover Dam — is drying up as flow from the Colorado River has declined 20%, with signals pointing to climate change. A drier West also means the likelihood of earlier and more large-scale wildfires.

Yet, despite adding 15 million more residents, California is using no more water than it did 30 years ago. Still, this does not seem to be enough. Farmers and ranchers are being asked to avoid irrigation. New Mexico farmers were asked to avoid planting anything if at all possible. Some farmers are tapping into groundwater.

The upshot is that water will get more expensive, as will the crops that depend on water to become the food on our tables. Two California counties are already under emergency orders on water usage. 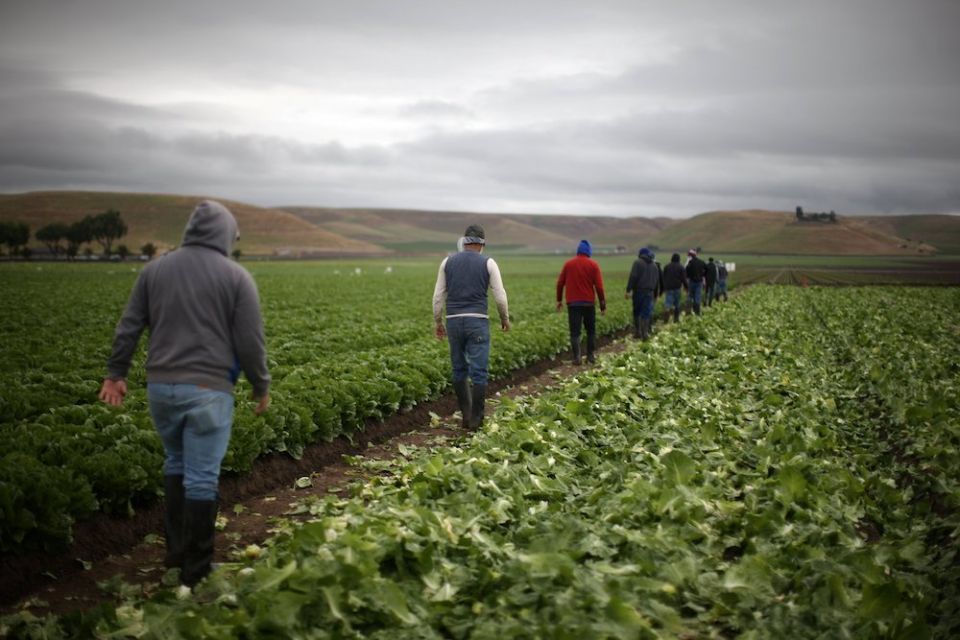 Farmworkers walk through a lettuce field in California. Farmers in parts of the southwestern U.S. are being asked to refrain from planting, while others are drawing on groundwater for irrigation. (CNS photo/Lucy Nicholson, Reuters)

People cannot control the weather, only its effects, so "how we do farming, how we get water to our cities, how we protect cities and town from flooding — all of those things are going to get more and more expensive until we get a handle on climate change," Misleh added.

"Local communities are facing these natural disasters — you could call them human disasters if you attribute them to climate change, which I think we can," he said. "We're going to have to have more and more relief" from disasters, he added, and not just overseas.

Beyond drought, the online news outlet Water Deeply estimates there are 300-plus water systems — 11% of all California systems — providing chronically unsafe drinking water, as it contains contaminants that paradoxically endanger health rather than sustain it.

Many of the water systems are in small agricultural communities, where runoff from fields can contain carcinogens. Another 300 in the state are at risk of failing.

Moreover, the communities responsible for maintaining the systems are called "disadvantaged" by the state, meaning that dollars are hard to come by to make fixes. A UCLA study pegs the cumulative repair bill at $10 billion. Who will pay? Customers? Cities? The state? California, in 2012, passed the first state law declaring the human right to water. The answer may be the federal government. 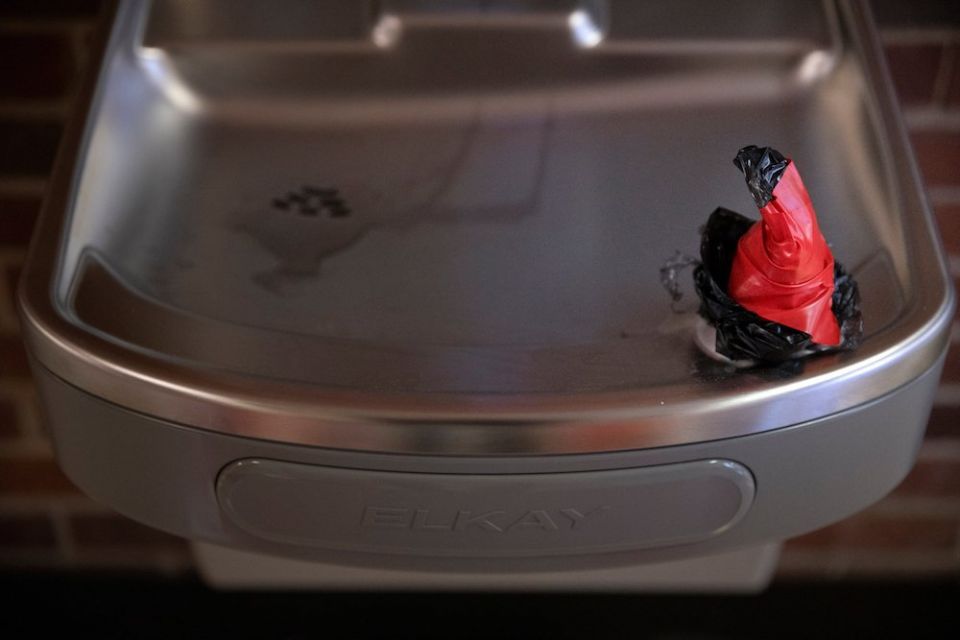 Republicans offered a scaled-down version of the bill May 27. At $928 billion, it's less than half the $1.9 trillion American Jobs Plan price tag, but it includes $80 billion for water systems.

Pope Francis, in his encyclical "Laudato Si'" — the sixth anniversary of its promulgation was May 24 — devoted an entire section to "the issue of water."

"Fresh drinking water is an issue of primary importance, since it is indispensable for human life and for supporting terrestrial and aquatic ecosystems. Sources of fresh water are necessary for health care, agriculture and industry," Francis said. "Water supplies used to be relatively constant, but now in many places demand exceeds the sustainable supply, with dramatic consequences in the short and long term."

The pope could have been thinking of California and Flint, Michigan, when he said: "Every day, unsafe water results in many deaths and the spread of water-related diseases, including those caused by microorganisms and chemical substances."

And Francis and California lawmakers are in accord when the pontiff added: "Access to safe drinkable water is a basic and universal human right, since it is essential to human survival and, as such, is a condition for the exercise of other human rights. Our world has a grave social debt toward the poor who lack access to drinking water, because they are denied the right to a life consistent with their inalienable dignity."

Young Catholics, according to Misleh, are looking at how the church — even if it's just their own parish — respond to changing climate, citing opportunities from preaching to cutting energy waste. "It's not only the right thing to do by God's creation, but it gives young people hope for them that there's a place in their church for them," he said.

Fr. Emmet Farrell, a retired priest of the Diocese of Sioux City, Iowa, who has been ministering in the San Diego Diocese for the past 20 years, feels the urgency himself. Before the pandemic, he went to about one-third of the diocese's 97 parishes and four of its five Catholic high schools to talk about "Laudato Si'" on behalf of his initiative, Creation Care Team Ministries, until the pandemic hit last year.

"Now that the Vatican has come out with their action platform, that gives us new impetus" for when something more closely resembling normalcy resumes, Farrell told Catholic News Service, referring to the program launched May 25 for implementing "Laudato Si'" throughout the church.

"One of the challenges is getting a young adult on the team," he admitted. "People say, 'You've got to get the young adults.' We got one, and he left. We got another one, and she's busy doing things in her parish."

Farrell, who ministered 16 years in Latin America and will turn 82 in June, added, "At my age I don't know why I'm doing this." Really, though, he does: "Pope Francis. His mind and my mind resonate. He's Latin American. He's a Third World Man, and I'm a Third World man."