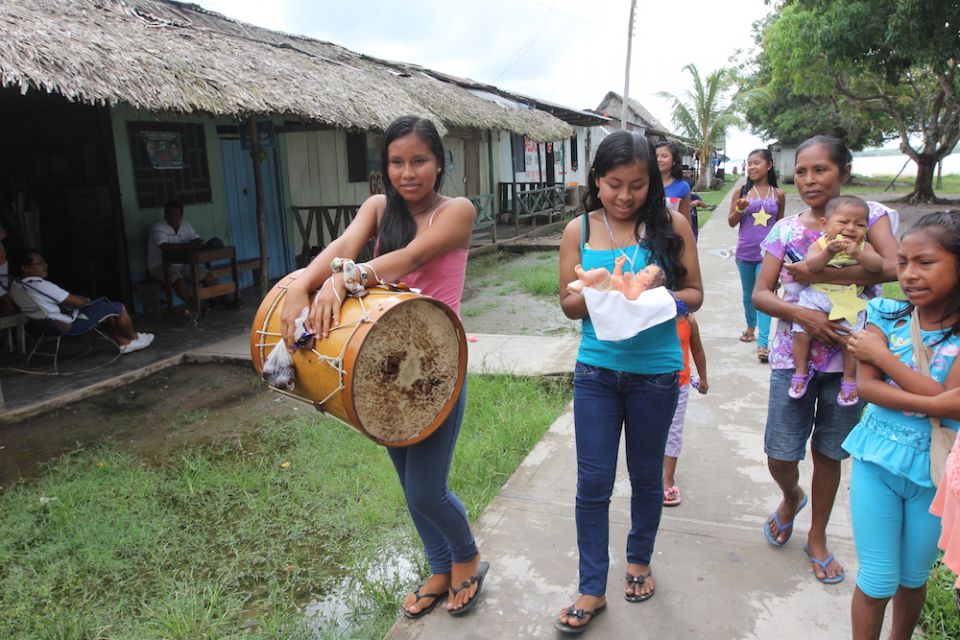 On the morning of Christmas Eve six years ago, I awoke to find a couple of men building a miniature raft for Mary and Joseph and the baby Jesus. I was spending Christmas at the parish in Santa Rita de Castilla, a town of about 1,500 people on the Marañón River, a tributary of the Amazon in northeastern Peru.

In the course of the morning, a truly Amazonian Nativity scene took shape in the small wooden church. By the time I'd finished breakfast, there was a wooden frame covered with blue plastic to the right of the sanctuary. As a bucket brigade hauled water to fill it, several people cut and folded cardboard to make houses. Others brought a small palm tree and some fruit tree seedlings to shade the houses and surrounded the pool with grass.

Outside, a man wielding a large machete delicately carved a miniature paddle, while others lashed sections of palm trunk together with vines to make a small raft. When the scene was complete, Mary and Joseph were afloat on the raft, paddles at the ready, gazing tenderly at the baby Jesus resting in a bed made of a large, curved leaf.

A few floating plants, brought from the river, rounded out the effect, along with a couple of turtles, which were a favorite with the kids at the Christmas Eve Mass.

The Nativity scene varied from year to year, depending on the parishioners who were assembling it, I was told, but it always reflected life along the river, so distant from the urban capital of Lima, where I live.

That scene, and the way it mirrored everyday life, came to mind earlier this week when I received photos of an unusual Nativity from Spanish Augustinian Fr. Miguel Fuertes, who worked for decades along Amazonian rivers and has been administrator of the Vicariate of Iquitos, which includes Santa Rita de Castilla, since the bishop died a year ago.

This year, COVID-19 ravaged Iquitos, a city of about half a million people, spreading quickly through crowded shantytowns near the river ports and on the urban periphery. The hospital filled with patients, corridors became makeshift wards, and patients lay on mats on the floor, tethered by narrow plastic tubes to lifegiving cylinders of oxygen.

Then the oxygen ran out. Demand outstripped supply in Iquitos, which is accessible only by air or river. The price of a cylinder of oxygen, usually about $150 for a 13-hour supply, shot up to $1,000, an inconceivable amount in a place where most people don't even make the minimum wage of less than $300 a month.

By official figures, 1,000 people in Iquitos died of COVID-19. The director of the regional health office estimates that the real number is closer to 3,500 — there were few test kits, so most did not get tested, and many people died at home, unwilling to go to the hospital, where they would be separated from their families and run a high risk of dying anyway, possibly for lack of oxygen.

When it became clear that the government would not provide oxygen, the Vicariate of Iquitos launched a collection, raising about half a million dollars in just a couple of days. There were some large donations from benefactors, but a significant amount came from local residents — many out of work and barely able to feed their families because of Peru's three-month lockdown — who contributed a few coins from the little they had. 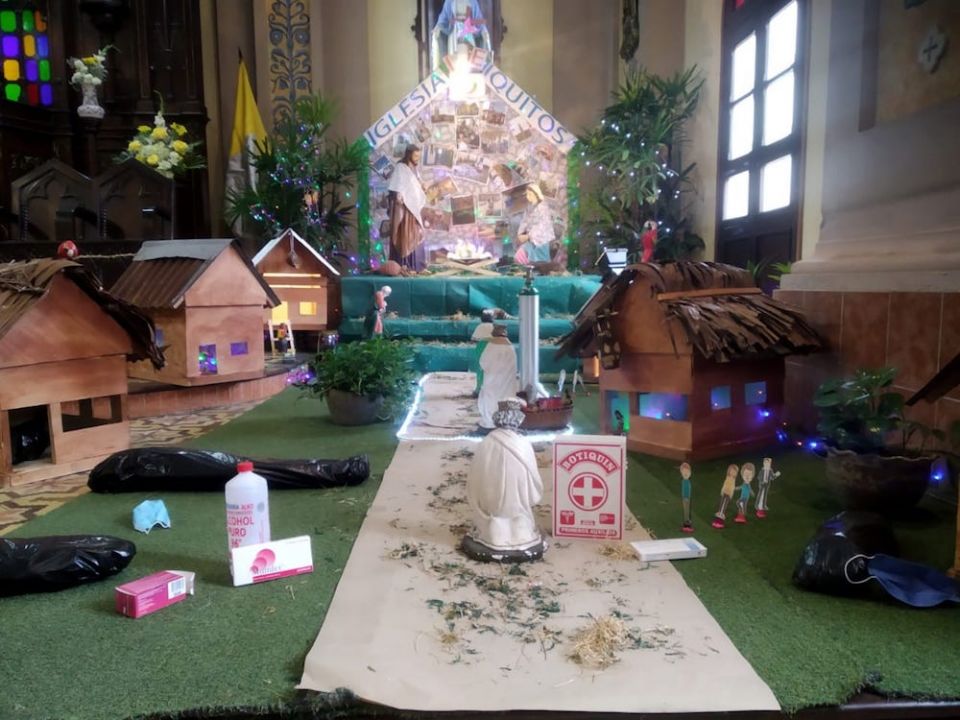 In the Nativity scene in Iquitos' small cathedral, Jesus is born into that world. Small houses typical of the Amazon's simple wooden dwellings, with tin or palm-thatched roofs, line a walkway leading to the manger. Several homes sport holiday lights, and colorful macaws perch on two roofs. People peer from their doorways as the Magi approach with gifts more precious than gold: a first aid kit, a food basket and an oxygen cylinder.

Outside of several houses are cadavers wrapped in plastic, a grim and sorrowful reminder of the powerlessness of families who lost loved ones and could not even bury them. Masks, a bottle of alcohol and a few boxes of medicine lie nearby.

A light shines on the Christ Child in the manger as Mary and Joseph keep watch, accompanied by an armadillo, a sloth, a tapir, an agouti and other rainforest creatures. Above the scene, a sign reads, "Awake, your Savior comes."

As it does every Christmas, the annual Nativity scene grew out of the parish team's reflection on the experience of the past year, Fuertes told me. "It's painful. It's impossible to express what people have lived through. So much pain." But amid it, "the church embraces the people, the church embraces God."

COVID-19, which has also been devastating for Native Americans in the U.S., has taken a heavy toll in Amazonian villages and among the indigenous people who make up much of the population in cities like Iquitos, in Peru, and Manaus, in Brazil.

Amid the ongoing tragedy, this Nativity scene reflects both sadness and hope — fitting for a Christian community that has suffered much, but has not lost faith.

Christmas Eve brought to a close Simple Advent, Abundant Life, the series of reflections in which Brenna Davis of the Ignatian Spirituality Network invited us to be more deliberate about living gently upon this Earth. The series struck chords with many of our readers.

In response to the reflection about taking a break from technology, reader Frank Koob pointed out that electronic devices can also be a lifeline for people who live alone and far from family, especially during these long pandemic months. And the reflection about simplifying the route our food takes from farm to table led Mary Cathy Bunting to note that another step we can take is to grow our own vegetables and freeze them for the winter.

Reader Lorraine McGuinness said the series "opened me up to things I have not considered in my own life ... so now I can start making simple changes."

Thanks to all of you who have followed the series and incorporated some of the actions into your lives. We love hearing about the steps you are taking to live more simply and what you are learning along the way. We invite you to drop us a line at earthbeat@ncronline.com or tell us in 150 words or less by submitting a Small Earth Story.

As we count our blessings this Christmas, we especially remember you, our readers, with gratitude. We want EarthBeat to be the place where you find news and analysis that challenges and inspires you.