EarthBeat Weekly: Laudato Si' reminds us that ecological conversion must be communal 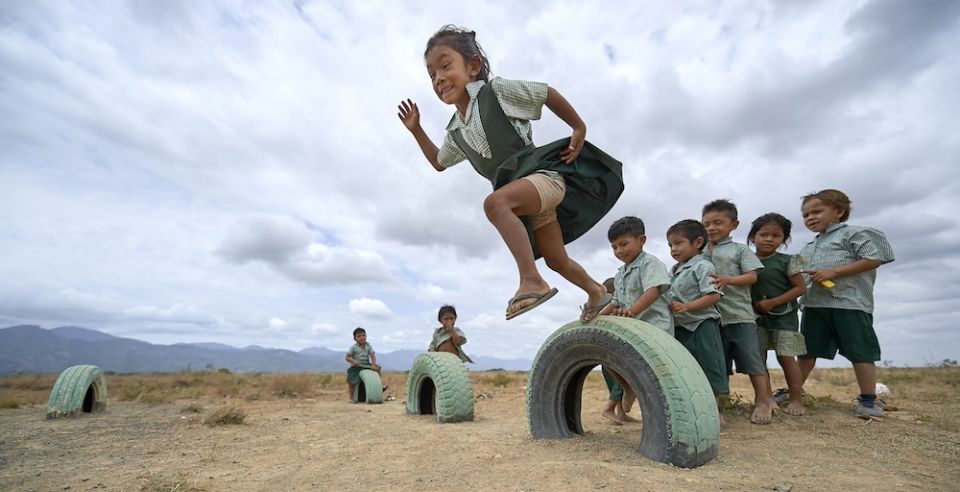 Children play in a village near Lethem, Guyana, in 2019. Pope Francis' encyclical Laudato Si' calls for reflection on the kind of world we want to leave for future generations. (CNS photo/Paul Jeffrey)

Sometimes things happen that completely change the way we look at the world. For longtime Catholic climate activist Lorna Gold, it was reading Pope Francis' encyclical "Laudato Si', on Care for Our Common Home" and thinking of her young sons.

In an eloquent speech on July 24 at the annual conference of the National Justice and Peace Network of England and Wales, Gold told how, as she read the text, she asked herself what kind of world she would be leaving behind for her boys.

Shedding tears of anger and sadness as she absorbed Francis' words, she said, was "a pivotal moment in my life journey of personal ecological conversion." It bridged the dissonance between what her head knew about climate change and what her heart felt. Such "cognitive and affective dissonance is widespread in our society — it has become a coping mechanism and way to deflect blame," she added.

Gold said the encyclical made her look at the world with new eyes. I especially like what she said about how it changed her as a parent:

Everything became wrapped up in the story of tender caring for each other and the Earth. Being outside, learning about and through nature, caring for other creatures together, became a major part of our lives. As a mother, I wanted above all to teach my own children about the wonderful Earth God has given us as a gift — and to nurture in each other an appreciation of the beauty of the Earth. Many times we would go for walks in the woods when the boys were younger and those walks would become the nature place for catechesis. "Who made all this, mummy? Why did God give us such a beautiful gift? Where do the creatures go when they die?" Big questions!

Laudato Si' — which Gold called "a love letter to the Earth" — spurred her to action. And action gives rise to hope, she said, echoing the teenage Swedish climate activist Greta Thunberg. Following Thunberg's example, Gold stood outside the Irish Parliament building, first alone, then gradually joined by others in an intergenerational protest that was also a sign of hope. She was also part of a widening circle of people who discussed and reflected on the encyclical. She eventually became chair of the board of the Global Catholic Climate Movement, now the Laudato Si' Movement (you'll see more about that on EarthBeat on Monday).

The COVID-19 pandemic, Gold told her audience, has shown that countries can act together — although imperfectly, obviously, given the inequity in access to vaccines — to address a crisis. The question, of course, is how to make the world's leaders feel the same sense of urgency about climate change.

It is hard to ignore recent signs — the hot, dry weather creating perfect conditions for wildfires in the U.S. West, the burning tundra in Siberia, the deadly flooding in parts of Europe, India and Africa. Those events, combined with the pandemic, are reminders of how closely tied we are to one another and to the natural world, even though our modern lifestyles too often estrange us from it.

"Somehow," Gold said, "the pandemic is teaching us about deep connection — we are all connected to each other and to nature. This is no longer a theory, it is an undeniable lived experience. The forced separations and absence of deep connection has shone a light on who we are."

The challenge now is to create a kind of normal which breaks with the cycles of environmental destruction and points to a clear pathway to a different future. We have many of the building blocks for that future but what is lacking is the ability to see beyond the narrow frame we have drawn for ourselves. Shifting this frame is no easy task as that future has to be guided by different values and how these are translated into key policy choices in the coming years.

On EarthBeat this week, we describe some ways in which people are rethinking our societies and our relationship with creation.

Alex Mikulich casts a critical eye at the global economy, pointing out that we tend not to see how economic growth delivers diminishing returns. He offers the concept of "degrowth" as a more sustainable way of structuring the economy, one that would allow both our human and our other-than-human kin to fully flourish.

Other people are rethinking our relationship with food, the Earth from which it comes and the workers who grow, package, process, deliver and serve it. I spoke to some of those people this week, in conversations that coincided with a conference sponsored by the United Nations Food and Agriculture Organization. Cindy Wooden of Catholic News Service reports that ahead of that conference, Pope Francis sent a message saying that the work of feeding the world must begin with family farms.

These are just a couple of examples of the ways in which people are responding to Francis' call to ecological conversion.

I'll give Gold the last word here — and I encourage you to read the entire text of her speech. She reminded her listeners that when Francis calls in Laudato Si' for an ecological conversion, he is speaking not only of individual conversion, but of a communal change of heart. And in that change of heart lies our hope for the future:

Conversion is about stepping into a new reality, about inhabiting that future already and inviting others in. Given the often overwhelming sense of ecological crisis, it can seem at times a hopeless struggle. Yet as parents, as Christians we cannot give up. We have to believe that a new future, that God's kingdom can emerge, that death and destruction is not the end. We have to approach the future in this spirit of hope and renewal, like in the pangs of childbirth.

We all have those watershed moments when something comes into focus for us. What experience has set you or your faith community on the path to ecological conversion? We invite you to tell us in 150 words or less and share it as a Small Earth Story.

EarthBeat | EarthBeat Weekly: Laudato Si' reminds us that ecological conversion must be communal