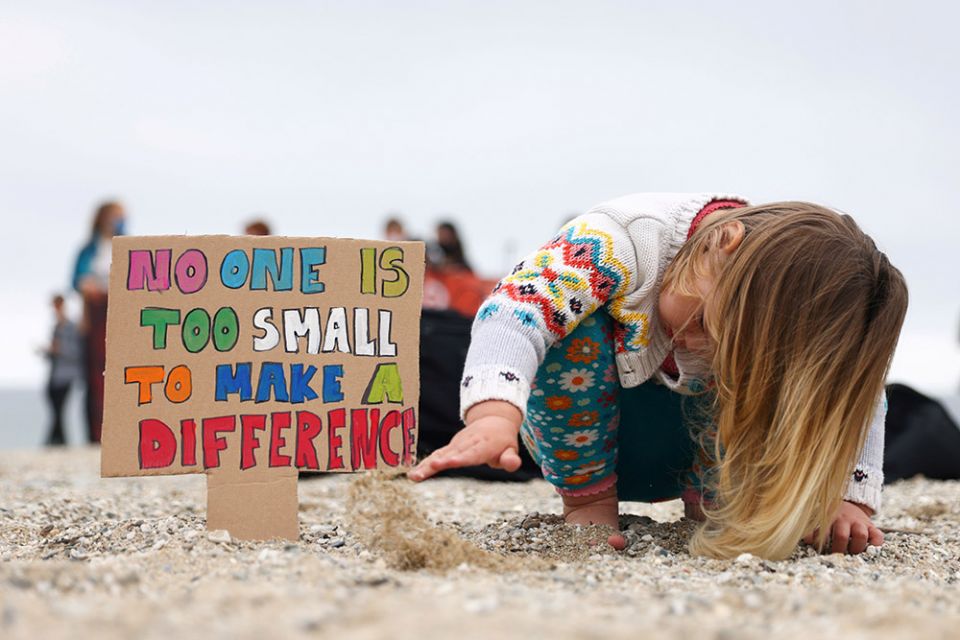 A girl in Falmouth, Britain, plays with sand during a climate protest June 11. (CNS/Reuters/Tom Nicholson)

Grim but not hopeless. A foreboding future but the potential for a better one, if immediate, systemic and sustainable action is taken. An urgent need to adapt to increasingly extreme weather. And a key role for faith communities in all of it.

Those were among the responses of religious groups and their allies to Monday's major report on climate science from the United Nations Intergovernmental Panel on Climate Change.

The U.N. panel warned that within just over a decade the average global temperature could reach 1.5 degrees Celsius above pre-industrial levels — a critical threshold at which scientists say irreversible changes in ecosystems will occur, putting millions of people at risk.

Even if greenhouse gas emissions were drastically reduced immediately, the planet would still be likely to reach the 1.5 mark sometime in the 2030s because of the heat-trapping emissions already released into the atmosphere. 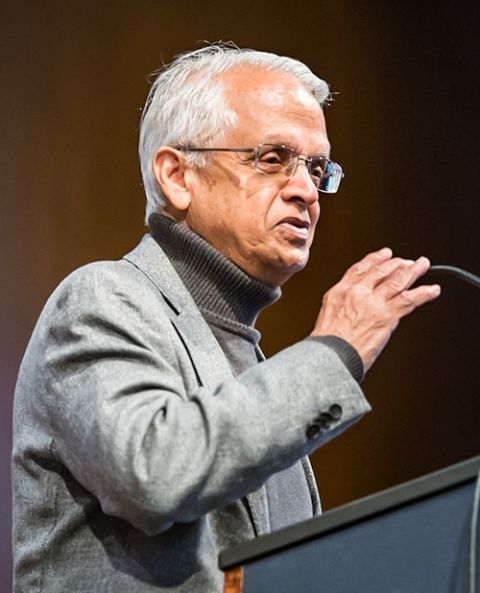 Veerabhadran Ramanathan: "We are at a crucial turning point. A crucial fork in the road, where we can take the right path." (CNS/Courtesy of Villanova University/Paul Crane)

That poses a dual challenge, climate scientist Veerabhadran Ramanathan, a member of the Pontifical Academy of Sciences, told EarthBeat. While nations must sharply reduce emissions, especially by stopping the burning of fossil fuels, they must also ramp up efforts to help communities prepare to withstand the likely increase of extreme weather events. That's where faith communities come in.

"I'm afraid there's a false hope that if you cut emissions, we could stop the warming. No, we can't. It's like a huge tanker. You can't just turn it 180 degrees overnight," he said. "So we have to do two things at the same time: put new resources into building resilience in communities; on the other hand, cut down emissions so it doesn't get worse."

To get there, Ramanathan, a professor of oceanography at the Scripps Observatory at the University of California San Diego, said the world can't depend on leaders alone. A "massive public outcry for action" is also needed, particularly in the United States, and he believes religious traditions "have a huge role to play."

But as the executive director of the multifaith climate organization GreenFaith scanned coverage of the IPCC report, he winced at the doomsday angle that many stories took. Harper knows climate change presents an emergency to humanity, and that much must be done quickly to avoid mass catastrophe. But for him, the takeaway wasn't the end times the climate problem presents, but the good news that solutions represent.

"To me, the conundrum behind so much of this is that so many of those changes are possible and good," he told EarthBeat. "Everybody frets as if these changes represent the end of living well, when, in fact, the opposite is true. This is our pathway to a positive future."

"What religious communities need to do is to say we find hope in action on this," Harper said, adding that this can include raising awareness about climate science or lobbying for stronger responses from society. "No more words. We know what needs to be done. Hope will come from action."

Faith groups were among many reacting worldwide to the first publication from the IPCC sixth assessment report, representing the most up-to-date and comprehensive review of the state of the climate.

The group of 234 authors from 66 countries concluded that all regions of the Earth have been impacted by climate change, that human activity has "unequivocally" caused the planet to warm through greenhouse gas emissions, and that recent warming rates are unprecedented in at least 2,000 years.

They also outlined five scenarios of future emissions through the end of the century, all of which project that the planet will warm by 1.5 C, even if only temporarily, in the early 2030s. 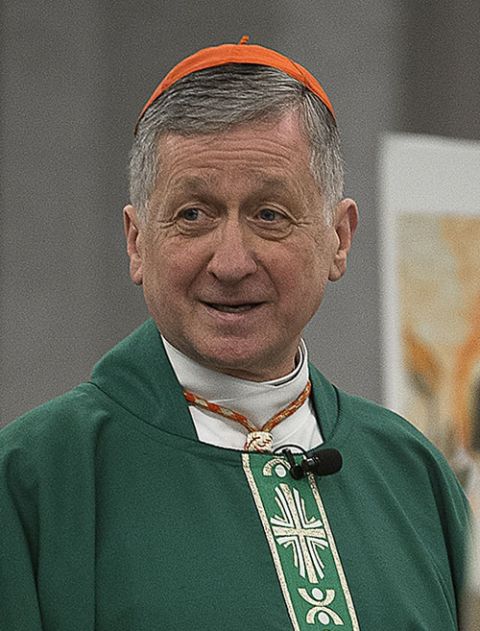 "If you go from 1 [degree] to 1.5 in about nine to 10 years, in principle, there could be a 50% amplification of all the horror stories we're seeing, these fires, storms, floods," said Ramanathan, who called the new report "the most ominous of all the IPCC reports" since the first was published in 1990.

Cardinal Blase Cupich of Chicago told EarthBeat in an emailed comment that the IPCC report reflected what Pope Francis wrote in his encyclical "Laudato Si', on Care for Our Common Home," which said, "Doomsday predictions can no longer be met with irony or disdain. … The effects of the present imbalance can only be reduced by our decisive action, here and now. We need to reflect on our accountability before those who will have to endure the dire consequences."

Caroline Kiiru, biodiversity and climate manager for the Laudato Si' Movement, shared that thought, saying the IPCC report provides further evidence of the human influence on the Earth that Francis described in his 2015 social encyclical.

"We cannot bury our heads in the sand and say this is not happening. So this document really reiterates the conversations that have already existed. It is a call to action, if anything else, for us to stand up and start doing better," she said.

Reflecting on the report, Dan Misleh, executive director of Catholic Climate Covenant, was reminded of the Book of Exodus, in which Moses repeatedly confronts Pharaoh with dire predictions of looming plagues that ultimately emerge.

"It feels like that's what's happening with these regular IPCC reports. They say, 'Hey, this is bad. We need to start working on this. This is getting worse,'" Misleh said.

"I'm hoping that this is yet another wake-up call. And there's this glimmer of hope in the IPCC report that we could still make it to the promised land if we do all the things necessary to drop emissions, stop deforestation and all the rest," he added. 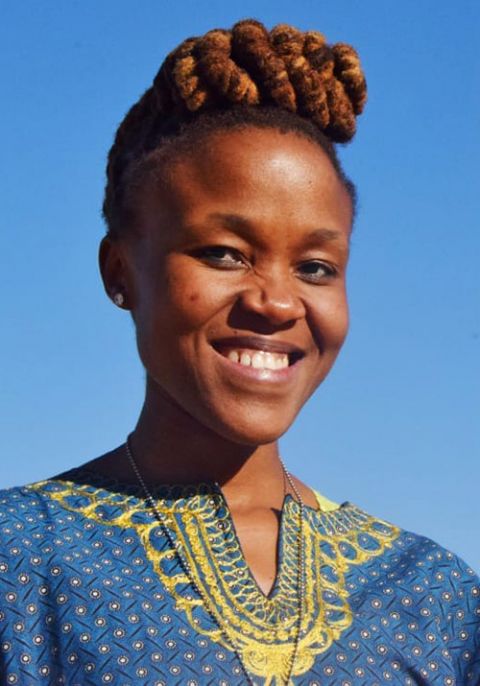 Lydia Lehlogonolo Machaka, energy and climate officer for the Catholic development network CIDSE, said the IPCC report puts urgency around climate change back on the international agenda. (Courtesy of CIDSE)

Lydia Lehlogonolo Machaka, energy and climate officer for the Catholic development network CIDSE, said the report puts urgency around climate change back on the international agenda.

For more than a year, global attention has focused on the COVID-19 pandemic, which persists as countries race to vaccinate amid emerging new variant waves of the virus. But the report, Machaka said, is a reminder that climate change did not go away in the midst of the pandemic, as evidenced by wildfires in California, Greece and Turkey, and major flooding in Europe and China. And it's another reminder of the importance of scientific research.

The latest IPCC report, while not addressing recent events, stressed that extreme weather is directly linked to climate change. Machaka said it is a responsibility of faith groups and nongovernmental organizations to bring those real, on-the-ground experiences to discussions about scientific findings and policy negotiations.

While signs of momentum have emerged ahead of the U.N.'s COP26 climate summit in Glasgow, Scotland (Nov. 1-12), including new climate pledges from the U.S. and the European Union, most emissions-reduction targets submitted by countries still fall short of what scientists say is required.

"This has been agreed to for many years. All they need to do is to implement," Machaka said.

On Oct. 4, Francis will host leaders of world religions and scientists at the Vatican to draft a statement to government leaders calling for greater global commitment to climate action at COP26. On Oct. 17-18, the GreenFaith-organized "Faith for Climate Justice" event will feature two days of public actions urging governments, banks and other groups with power to do more to address climate change. 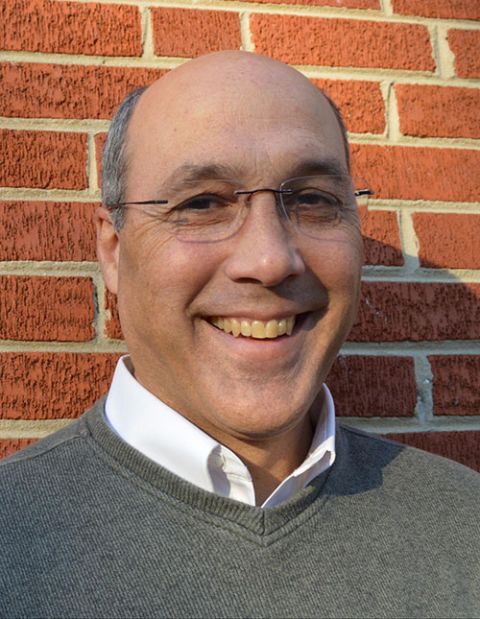 Dan Misleh: "We need more leadership, frankly, from some of our bishops and priests." (CNS/Courtesy of Dan Misleh)

The Laudato Si' Movement continues to collect signatures on its "Healthy People, Healthy Planet" petition, which it intends to deliver to negotiators at COP26, and Catholic Climate Covenant is also gathering support to urge President Joe Biden and Congress to pass substantial climate legislation this year.

Ramanathan, who has been invited to attend the Vatican gathering, said that because Christianity is the predominant faith in the U.S., churches, with teachings like Laudato Si' in hand, can take the lead in breaking through the nation's polarization, including around climate change.

While Harper believes faith communities can be powerful catalysts on climate, he said they must also realize there are groups in each religious tradition, in the U.S. and elsewhere, that are resistant to taking on climate change and environmental issues.

"We're not quite yet at the level of being the powerful, unified choir that we need to be. And we need those voices now," he said.

Misleh said, "We need more leadership, frankly, from some of our bishops and priests."

He added that he hopes the IPCC report can help awaken more people not only to the dire forecasts, but also to the possibility of a more sustainable society.

"We are at a crucial turning point," Ramanathan said. "A crucial fork in the road, where we can take the right path. The compass is pointing in the right direction, but we just need more people to see the compass."