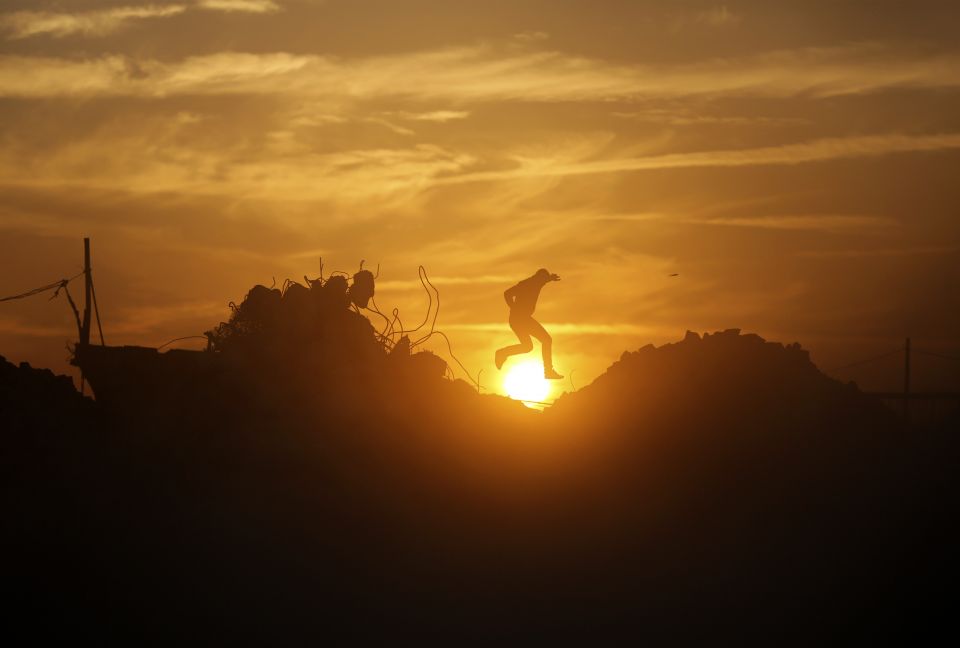 A Palestinian man, seen in January, is silhouetted on rubble of Palestinian houses destroyed during the Israeli War against Gaza. The man works for a company that turns the rubble into building materials. (CNS photo/Mohammed Saber, EPA)

Jerusalem — A heat wave in Israel and the Palestinian territories in July and near-record electricity usage — where it was available — are indications that, despite the continuous political tensions here, Christians, Muslims and Jews are facing a common enemy that needs to be confronted in a united manner.

"The level of the lake of Tiberias and of the Dead Sea is lower than 10 years ago, and the landscape is changing because of a continuous construction of houses," Franciscan Fr. Francesco Patton, custos of the Holy Land, told Catholic News Service.

Patton and two other religious leaders spoke at a recent news conference organized by The Interfaith Center for Sustainable Development, a Jerusalem-based environmental organization. They spoke about the urgency of putting aside political and religious difference to face these challenges and the role religious leaders can take in increasing awareness of the issue.

Rabbi David Rosen, international director of interreligious affairs for the American Jewish Committee, told journalists the Jordan River Valley, another area of Biblical importance, is facing an environmental crisis. In a covenant signed by religious leaders four years ago, they noted that over the past 50 years, the lower Jordan River has had 96 percent of its flow diverted, and what little water remains is polluted with saline and liquid waste or sewage.

Patton told CNS that other pressing issues in the Holy Land include the increasing water shortage, improper waste disposal and growing air pollution in various regions.

While Israel has begun a garbage recycling program, the Palestinian Authority has yet to institute such an effort. Awareness of proper garbage disposal is also an issue among certain sectors of both populations, with many people still tossing garbage on the side of the road or outside their buildings, with little regard to garbage bins at their disposal. In certain places of East Jerusalem, garbage pickup by the municipality is either lacking or erratic, and Palestinian residents often burn their own garbage for lack of a better solution.

Recent internal political differences have caused electrical shortages in the Gaza Strip. This has affected the ability of the sewage system to function properly, which has caused raw sewage to flow into the Mediterranean Sea, which borders Egypt and Israel.

The northern industrial Israel port city of Haifa, though often lauded for its political tolerance, is also often sighted even by its own residents for the lack of the environmental controls over the chemical factories located on its seashore. In a position paper earlier this year, the Israeli Ministry of Health noted Haifa has a 15 percent higher rate of cancer than the rest of Israel and leads the country in asthma and breathing problems.

Patton, Rosen and Kadi Iyad Zahalka, head judge of the Muslim Shariah courts in Israel, said religious leaders needed to unite in their efforts to educate and create a greater awareness about these environmental issues.

"We should offer values that can inspire the everyday life of people, and also recall the principles of our religious traditions that can inspire wise economic and political policies and decisions," Patton told CNS.

He noted that the Franciscan Custody of the Holy Land, which is in charge of holy places, is working on a pilot project to include environmental education in its local schools curriculum for the coming school year.

The impact of climate change can be easily ignored if a person lives in an acclimatized environment with the air conditioning on in the summer and heating on in the winter, said Patton, the son of a farmer in northern Italy. He told CNS he has seen how the harvest seasons have changed over the past 10 years.

"This means something has changed ... climate change is something which touches our lives," he said.

Referring to the papal encyclical "Laudato Si', on Care for Our Common Home," Patton noted the value of an interfaith strategy toward environmental issues in the Holy Land in the form of an "integral ecology." He said the issue is not only one of "environmental ecology" but also of "cultural ecology," which "connects the ecological issue to many fields in a reciprocal relationship."

"In this place, it is particularly important to have a linked vision, to work on a connection ... between different cultures (and religions) of Judaism, Islam and Christianity. This is an integral vision of ecology in the encyclical of Pope Francis," Patton told CNS. "He speaks of the importance of dialogue between religions of different faiths in this field. We can work as people of goodwill."

At the news conference, the religious leaders discussed the common respect for the environment and nature inherent in their religious traditions and holy books, and the responsibility these teachings entrust to people.

Despite the continuing political violence and struggle to control land not only in Jerusalem and the whole Middle East, but also around the world, people need to start discussing the issues of real importance concerning climate change and environmental sustainability before there is no land left to fight over, said Zahalka.

"Our lives are more important than all these issues," he said. The issue of environmental sustainability "gives us the opportunity to rethink all these (political) issues and put them into context ... to focus and invest in what is really important, which is life."

Patton said the creation of an interfaith environmental dialogue could even serve as a confidence-building measure between Israelis and Palestinians and others in the region, which could enable future discussions on social, political and religious issues.

"We received the gift of creation and, first and foremost, we are part of creation, we are not over creation. We have a shared responsibility toward this generation," he told journalists. "We can cooperate for something important for every human being in the present and in the future."