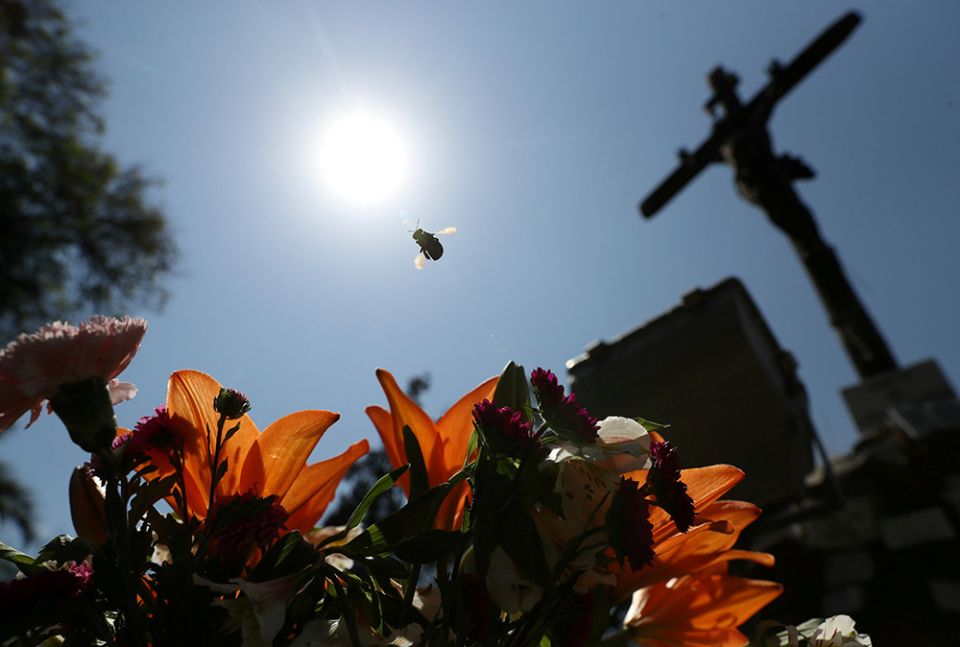 A bee hovers over flowers in front of a crucifix at a cemetery in Santiago, Chile, Feb. 18, 2021. (CNS/Reuters/Ivan Alvarado)

A spirituality closely bound to God's creation has deep roots in Scripture, where in Genesis God separates light from darkness and water from sky, then creates all plants and creatures of Earth and sea and sees how good it is.

The Book of Job, among others, picks up the theme, telling of a God who speaks intimately of the constellations, the many forms water takes, the wisdom of the ibis and the hunger of lions, and the reproductive cycle of deer, bears and mountain goats — but has a rather low opinion of the stork's common sense.

A couple of millennia later, St. Francis of Assisi added his voice to those who recognize the interconnectedness of all things, despite the pain of his own illness, finding God in — and praising God through — all of creation, including the sun, moon and stars, wind, water, fire and the Earth itself.

So it's not surprising that Pope Francis, the saint's namesake, echoes that idea in his own writings, especially his 2015 encyclical "Laudato Si', on Care for Our Common Home" and Querida Amazonia, the apostolic exhortation that grew out of the 2019 synod for the Amazon.

With his emphasis on integral ecology, Francis ties care for God's creation to our economic, political, social and religious priorities. In a lot of ways, with this pope, ecospirituality has gone mainstream.

The prefix "eco-" before "spirituality" comes from the Greek oikos, meaning home — a reminder that "this house is the only one we have, we're all together, what happens in Kolkata affects New York, Santiago in Chile, and São Paulo," Divine Word Fr. Fernando Díaz of Chile told EarthBeat.

"It really is a common home, and this common home is threatened," Díaz added. "We're all connected, and this is a way of understanding that home that demands that we look beyond the instrumental rationalism that has guided us in such a destructive way over the past century."

Díaz, who has worked for years with Mapuche people in southern Chile, has found Indigenous people to have a more holistic view of the relationship between human and other-than-human beings that calls for "a different perspective ... a way of understanding how we live and why we live in this home that is for everyone, and where everyone must have a place, which we must care for."

He added, "That's where ecospirituality comes in."

'A way of living, a connection'

Moema Miranda sees a similar understanding among people in her native Brazil who struggle with the impacts of mining on their communities. Brazil has seen several mining-related disasters in recent years, including the collapse of a tailings dam at the Brumadinho mine, which sent a deadly cascade of toxic sludge through communities downstream, and the expansion of illegal gold mining.

Miranda, a lay Franciscan, is part of the Churches and Mining Network, which has produced with Verbo Filmes a video, in Portuguese with English subtitles, that explains ecospirituality to people who are new to the idea.

While Brazilian theologians like Ivone Gebara and Leonardo Boff have written for years about the connection between ecology and theology, Miranda and others in the Churches and Mining Network wanted to "understand how the communities that resist mining do so, where the victims find the strength to keep resisting," she told EarthBeat. "Because just accepting the obvious or being cut down by the system seems like the easiest path."

In working with the small farmers, Indigenous communities and people of African descent most affected by mining practices, "we realized it wasn't simply ecological theology, but a spirituality, something much deeper — a way of living, a connection," she said.

"This spiritual presence ... doesn't fit into the framework of the rational, the theological," she added. "It's much more. We increasingly transform into an ecospiritual community, because ecospirituality develops in community."

That communal element is something Pope Francis understands well, according to Alirio Cáceres, a permanent deacon who advises the Colombian Catholic church's Cáritas network on matters related to ecospirituality and integral ecology. 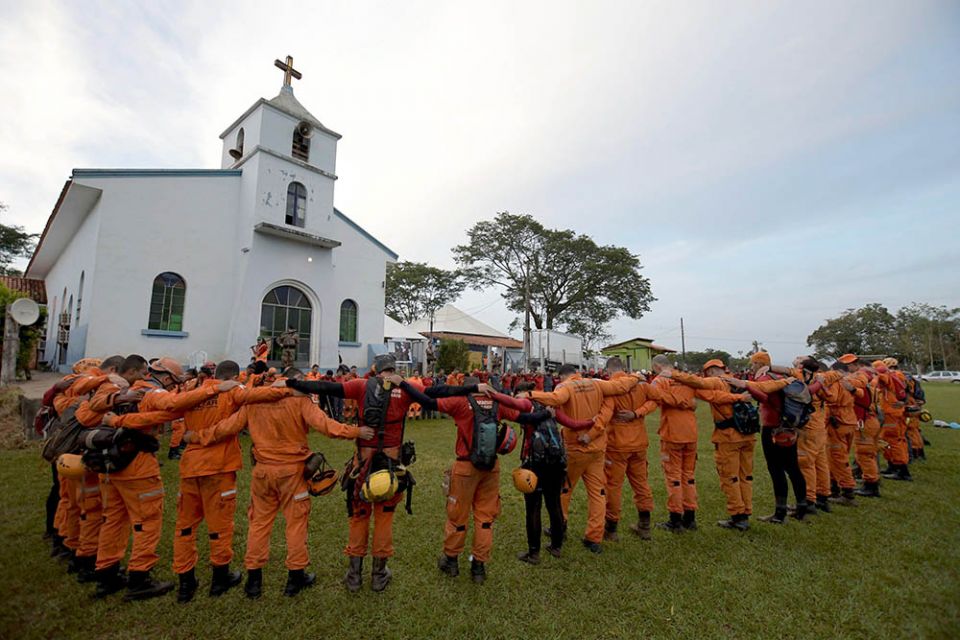 Members of a rescue team pray before working in a collapsed tailings dam owned by mining company in Brumadinho, Brazil, Feb. 13, 2019. (CNS/Reuters/Washington Alves)

Francis promotes a "culture of encounter ... with God, with oneself, with other humans and with beings in nature, which also are brothers and sisters, because they are children of the same creator," Cáceres told EarthBeat.

For Cáceres, "Spirituality is the driving force of life, the very meaning of life. So I think it's important to see it as a context for this papacy, which is very much one of dialogue, of encounter, of openness to other ways of seeing things."

Lessons from the Indigenous world

In Laudato Si', the pope points to the consequences of losing that sense of oneness with all of creation, writing that if humans lose their sense of awe and wonder at creation, "our attitude will be that of masters, consumers, ruthless exploiters, unable to set limits on their immediate needs."

He adds that St. Francis' "poverty and austerity ... were no mere veneer of asceticism, but something much more radical: a refusal to turn reality into an object simply to be used and controlled."

For Díaz, although the Franciscan St. Bonaventure and others have put a theological foundation under it, theology is not enough to describe the relationship of humans with the rest of creation.

'In the Indigenous world, the relationship with a tree, a lake, the forest, the sky, the stars, the moon, the sun, is not a systematic, rational, logical study. It is an experience of connatural knowledge.'

"In the Indigenous world, the relationship with a tree, a lake, the forest, the sky, the stars, the moon, the sun, is not a systematic, rational, logical study. It is an experience of connatural knowledge," he said. "What the Indigenous world gives you is the opportunity to reconnect with creation."

Sr. Caroljean Willie, a Sister of Charity of Cincinnati, saw that during her years as the Sisters of Charity Federation's representative at the United Nations.

Each year, she would attend the two-week conference of the U.N. Forum on Indigenous Issues, Willie told EarthBeat. "And every single year [the Indigenous participants] would say the same thing to us: You all keep talking about taking care of creation, talking about sustainability. But nobody's talking to us, and we've been doing it all our lives."

Panentheism: finding God in all things

For Willie, who now directs EarthConnection, her congregation's environmental center in Cincinnati, spiritual growth is one response to God's prodding to leave one's comfort zone.

The risk, however, is misinterpretation of the kind that occurred at the Synod of Bishops for the Amazon at the Vatican in 2019. Two days before the synod officially began, Francis marked his namesake's feast day, Oct. 4, with a tree-planting ceremony in the Vatican Gardens, accompanied by delegates to the synod, some of them Amazonian Indigenous people.

Conservative Catholic critics pounced, claiming that the prayer around a mandala-like banner where participants had placed symbols was pagan and showed that Francis tolerated — or perhaps promoted, in works like Laudato Si' — pantheism, or the worship of nature as a god.

But worshipping nature as a god is not the same as praising God in all of creation. The former is pantheism and the latter is panentheism — with just two letters marking the difference between heresy and orthodoxy, said Franciscan Fr. Daniel Horan, director of the Center for Spirituality at St. Mary's College in Notre Dame, Indiana, and an NCR columnist.

"Catholic Christianity, Orthodox Christianity, maintains that God draws near to all of creation," a theme that begins with the second verse of the first book of Genesis and continues throughout the Old Testament, Horan told EarthBeat.

In his Canticle of the Creatures, St. Francis does not worship the sun, moon and other natural elements as gods, but clearly says he praises God with them and through them.

St. Francis and his followers embraced "this idea that nonhuman creatures, the rest of God's creation, also have an inherent relationship to the divine ... because God is the one source of all creation, human and nonhuman alike. We're all united together, as Pope Francis would say, in the spirit of integral ecology. All creation is connected," Horan said.

And just as the natural world evolves, Willie said, ecospirituality raises questions that call Christians to deepen and widen their understanding of the divine.

"If we see the universe as ever-expanding, then how are we allowing our frame of reference to change?" she said. "And if the universe is evolving, how am I allowing myself and my concept of God to evolve?

Ecospirituality leads to an understanding that "we are part of an interrelated, interconnected, evolving web," she added. "It calls us to live in right relationship with all of creation."

EarthBeat | Ecospirituality is more than ecology and theology. It calls us to reconnect.