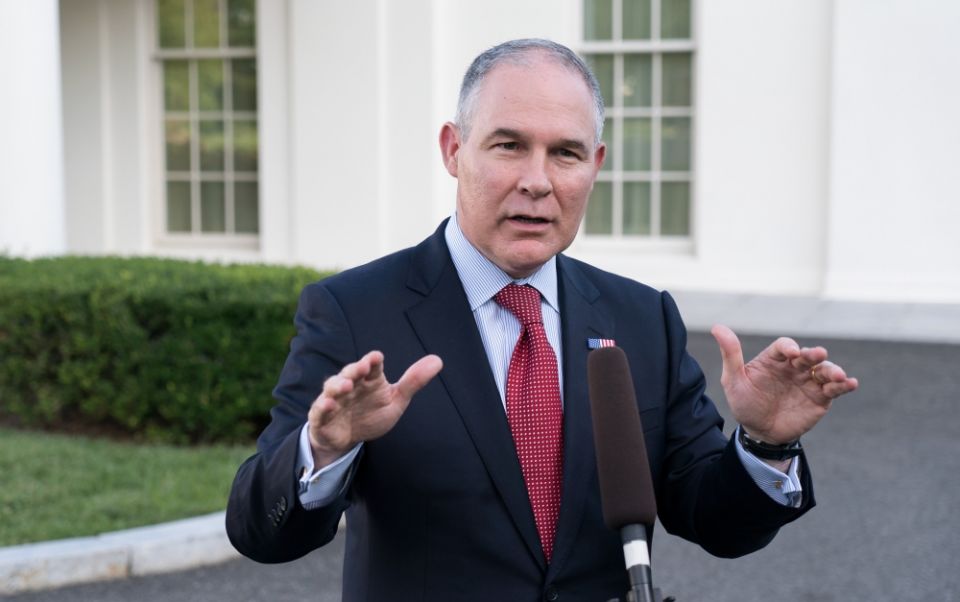 Story updated at 10:50, CDT, with additional reaction to the proposed rule.

The order proposing withdrawal of the Clean Power Plan was signed Oct. 10 by EPA Administrator Scott Pruitt. As attorney general of Oklahoma, Pruitt had joined 26 fellow attorneys general in challenging the rule in federal court. As head of the nation's top environmental office, he moved one step closer to dismantling it.

The Clean Power Plan sought to reduce emissions from the power sector — the country's largest source of carbon pollution — and, specifically, from existing coal- and gas-fired power plants, by 32 percent from 2005 levels by 2030. It set emissions targets for each state, but allowed flexibility in meeting them. It also provided states incentives to invest in renewable energy and energy efficiency measures.

The rule, finalized in August 2015, never went into effect as lawsuits tied it up in federal courts. In early 2016, the U.S. Supreme Court issued an unprecedented stay of the rule, freezing its implementation until it moved through the judicial system.

The proposal to repeal the Clean Power Plan bases that recommendation on a determination that the EPA under President Barack Obama exceeded its regulatory authority under the Clean Air Act by seeking measures "outside the fence line" of the power plants themselves. The EPA also said the Obama administration ignored states' concerns and gave priority to renewable energy sources over those from fossil fuels. It estimated repeal could save $33 billion in avoided compliance costs by 2030.

"We are committed to righting the wrongs of the Obama administration by cleaning the regulatory slate. Any replacement rule will be done carefully, properly, and with humility, by listening to all those affected by the rule," Pruitt said in a press release.

Through repeal, he said, "we can now assess whether further regulatory action is warranted; and, if so, what is the most appropriate path forward, consistent with the Clean Air Act and principles of cooperative federalism."

The proposed repeal rule will be open to public comment for 60 days once it is entered into the Federal Register for publication. The EPA said it has not determined yet if or when it will issue a replacement rule to regulate greenhouse gas emissions — the primary driver of climate change — from existing power plants.

Several Catholic organizations reacted with disappointment to the proposed repeal, with multiple issuing calls to Congress to step in and pass climate legislation.

In a statement, Bishop Frank Dewane, chairman of the Committee on Domestic Justice and Human Development for the U.S. Conference of Catholic Bishops, said the proposed withdrawal "solidifies the already troubling approach of our nation in addressing climate change."

"The USCCB, in unity with Pope Francis, strongly supports environmental stewardship, and has for several years called on our nation to help curb carbon emissions through a national carbon standard," said Dewane, who is bishop of Venice, Florida.

He called a national carbon standard "a critical step for the U.S. at this time," and noted that many states have already taken measures to meet carbon mitigation goals. He added that while the Clean Power Plan is not the lone mechanism for addressing carbon emissions, the lack of a proposed alternative by the EPA while proceeding in seeking its repeal does not bode well for the U.S. in confronting global warming.

"Having already withdrawn from the Paris climate agreement, this change in course by the EPA solidifies the already troubling approach of our nation in addressing climate change, and places at risk many people, including the poor who can least bear the consequences of inaction," Dewane said.

“It blatantly denies climate science and the public health impact data. Most of all, it ignores the cry of the Earth, our common home, and the cry of the most impacted peoples, including here in the United States,” she said in a statement.

Some estimates suggested the Clean Power Plan would prevent as many as 150,000 childhood asthma attacks, 6,600 premature deaths and 2,800 admissions to hospitals.

Dan Misleh, executive director of the Catholic Climate Covenant, in a statement echoed that the decision to repeal "will likely increase premature deaths and put public health — particularly in poorer neighborhoods near power plants — at risk across the United States." He highlighted the flexibility the rules allowed states as a strong aspect, and said repeal throws into question the potential gains the U.S. may making in addressing human-driven climate change — a reality recognized by the U.S. bishops, as well as other bishops across the globe, and three previous popes — and instead exacerbate it.

"And we know that our burning of fossil fuels is among the biggest contributors to this moral dilemma. The solution is not to burn more fossil fuels, but less," Misleh said.

In his 2015 encyclical "Laudato Si', on Care for Our Common Home," Pope Francis wrote, "We know that technology based on the use of highly polluting fossil fuels — especially coal, but also oil and, to a lesser degree, gas — needs to be progressively replaced without delay."

The Rev. Sally Bingham, founder and director of Interfaith Power and Light, said that a repeal of the Clean Power Plan was inconsistent with President Donald Trump's promise to protect national security, in that "millions of lives will be jeopardized if polluters are allowed to continue poisoning the air." She called any weakening of the rule "a clear moral failing of our heritage for stewardship of God's Creation."

Scott Wright, director of the Columban Center for Advocacy and Outreach, said its missionaries witness "the horrible devastation carbon pollution wreaks on the earth and the vulnerable. This administration continues to demonstrate that they do not appreciate the extent to which the insatiable energy demands of our economy are tearing apart the web of life, with disastrous consequences for future generations."

The Franciscan Action Network said it was "outraged" by the EPA's proposal but not surprised. It called the Trump's administration "hostile to the environment" and noted that more than 50 environmental regulations have been rolled back in the eight months since Inauguration Day.

"This is detrimental to the future of our planet and life itself," its executive director, Patrick Carolan, said in a statement.

Franciscan Action Network, the public policy organization representing Franciscans in the U.S., added it will continue to advocate for solutions to climate change, and took issue with Pruitt's declaration in announcing the forthcoming proposed rule to a coal company in Kentucky, when he said, "The war on coal is over."

"There is no war on coal," Franciscan Action Network said, adding that steps must be taken to help miners who have lost jobs transition to new employment opportunities.

"We are entirely capable of finding solutions if we look beyond partisan rhetoric that is merely making fossil fuel industries richer and putting the planet at risk," the organization said.

The Franciscan group also challenged the position of Pruitt and other Trump officials who have questioned the scientific consensus that the planet is warming largely due to human activity.

In the months since his election, Catholics have petitioned Trump to continue the Clean Power Plan, to keep the U.S. in the Paris Agreement on climate change and to maintain financing for the Green Climate Fund, which assists developing nations in climate mitigation and adaptation measures.

In each instance, the president has done the opposite.

U.S. bishops have issued six letters and statements urging the Trump administration to protect those programs. Before Trump's election, the bishops' conference offered strong backing to national carbon standards on power plants, twice having oral testimony delivered on their behalf during EPA public hearings on the proposed carbon pollution standards.

In addition, groups like the Catholic Climate Covenant urged Catholics to submit comments supporting the Clean Power Plan, which drew 4.3 million comments in the period before the final rule was issued.

In March, Trump signed an executive order that among numerous directives aimed at rolling back environmental regulations directed EPA to review and revise or fully withdraw the Clean Power Plan.

At the time the final rule was issued in August 2015, Obama had called it "the single most important step America has even taken in the fight against global climate change."

The cuts in greenhouse gas emissions under the Clean Power Plan were projected to equal 870 million tons of carbon pollution, or the equivalent of removing 70 percent of passenger vehicles from U.S. roads.

The targets under the Clean Power Plan were a central component to the U.S. pledge under the Paris Agreement, which seeks to lower emissions 26-28 percent compared to 2005 levels by 2025. In June, Trump announced his intentions to remove the country from the Paris accord; such a move would not be official until Nov. 4, 2020 (a day after the 2020 presidential election), under the terms of the international pact.

A lengthy timeline is anticipated for the proposed repeal of the Clean Power Plan. Already, environmental groups and several state attorneys general have vowed to fight it in courts.

Even before litigation, the process for issuing a new rule can take upward of a year. When the rule was first introduced in June 2014, it took 14 months for a final version to be issued.

A version of this story appeared in the Oct 20-Nov 2, 2017 print issue under the headline: EPA proposes Clean Power Plan repeal .