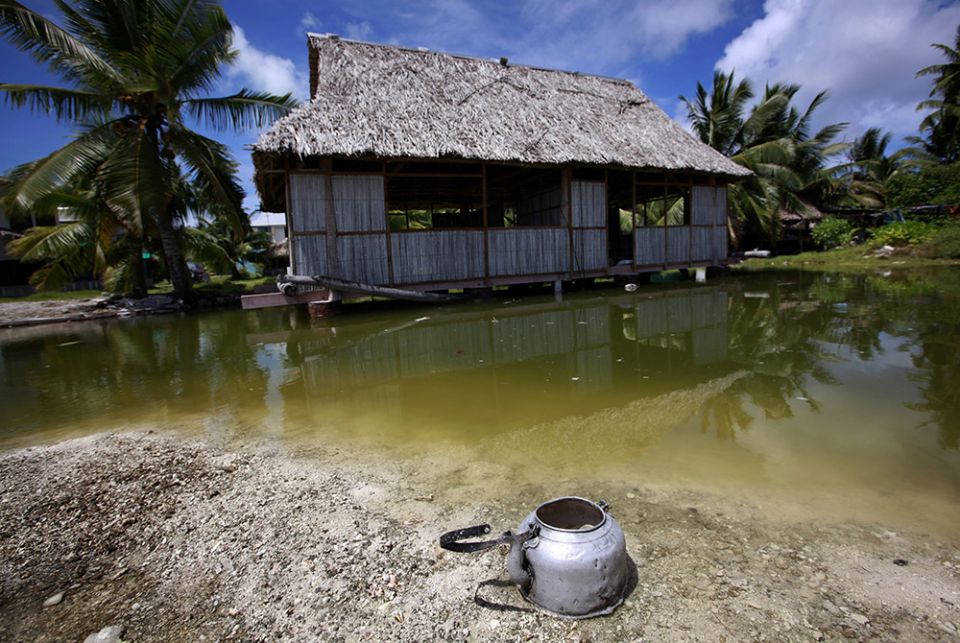 An abandoned house that is affected by seawater during high tides stands next to a small lagoon near the village of Tangintebu on South Tarawa in the central Pacific island nation of Kiribati May 25, 2013. Pope Francis said island nations need protection from extreme environmental and climate changes. (CNS photo/David Gray, Reuters)

The groups are urging the international body to designate the right to a clean, safe and healthy environment as a global human right. They are also calling for the U.N. to create a special rapporteur for climate and human rights.

One goal of the twin campaigns is to position climate justice more prominently in international climate negotiations like the COP26 summit slated for November in Glasgow, Scotland, said Sandra Epal-Ratjen, international advocacy director for Franciscans International.

"People who have been involved very actively in climate negotiations have seen it is difficult to bring in effectively the issue of human rights and justice within the negotiations," Epal-Ratjen told EarthBeat. "There is the sense that we never bridge the two things — you have social injustices [and] social inequalities, and then you have the technical climate change negotiations, and ... we never really manage" to merge them.

The groups hope that the position of a special rapporteur for human rights and climate will be created at the next session of the U.N. Human Rights Council, to be begin June 21.

Special rapporteurs are independent experts who investigate and report on human rights violations in a variety of thematic areas, including migration, Indigenous peoples, violence against women and toxic substances. Some of those fields overlap, and as climate change has become an increasingly urgent topic, rapporteurs have incorporated that issue into their reports, as well.

Related: Indigenous people's lives depend on their lands, but threats are growing worldwide

But special rapporteurs' reports are limited to 20 pages, so separating climate change from other human rights issues will enable a rapporteur to do more in-depth analysis while freeing up other experts to focus on their own areas of specialty, said Sébastien Duyck, senior attorney for the climate and energy program at the Washington, D.C.-based Center for International Environmental Law.

The idea of a special rapporteur for human rights and climate was first proposed about a decade ago. It has gained momentum recently, especially because of support from small island nations and countries like Bangladesh, which are already feeling the impacts of severe storms and sea level rise, he said.

A rapporteur, who can make official visits to countries, could look more closely at countries' policies for adaptation to climate change, their proposals for reducing greenhouse gas emissions, and whether the burden falls on less-advantaged communities.

People involved in Indigenous and environmental rights in different parts of the world have different expectations of a rapporteur, according to a study published by Franciscans International, the Center for International Environmental Law and the Friedrich-Ebert-Stiftung foundation in Geneva.

The study, based on consultations with 157 people from 55 countries, found that participants in Africa would like to see a rapporteur address issues such as climate debt and impacts of business activities and countries' responses to climate change. Those from Pacific island nations hoped a rapporteur could highlight the lack of policies and funding for adapting to climate change and dealing with displacement resulting from rising sea levels.

Designation of a specialized rapporteur would give greater weight both to the threat that climate change poses to human rights — through its impact on water scarcity, migration and food security, for instance — and to the responsibility of countries to address it, Duyck told EarthBeat.

"We know what the problem is — it's addiction to fossil fuel," he said. "Instead of tackling this, we are trying to shift to market-based solutions, technological solutions."

"The lack of sufficient action [on global warming] is actually the greatest infringement of human rights, because climate change is such an existential threat," Duyck said. "But it's also a man-made threat. Climate change is a political choice. It is not something over which we have no control."

"You cannot have human rights on a dead planet, and you can not enjoy human rights in an environment that is polluted."
—Sandra Epal-Ratjen, Franciscans International

In that sense, climate change undermines the basic principle that every person has "the same right to live in dignity, has the same value, no matter where you live, and without discrimination," he added.

Some countries have legislation that partially protects that right, such as limits on air and water pollution. And more and more countries have included in their constitutions the right to a healthy environment or have even granted rights to nature, although enforcement of those laws is uneven.

But international human rights conventions make no mention of a specific right to a clean, safe and healthy environment, which faith-based and environmental organizations are now promoting.

"This is not going to be the silver bullet," Duyck said, but global recognition of the right to a clean environment would help build political momentum, "continuing this journey towards effective protection."

Including the right to a healthy environment in the canon of international rights would also recognize the fact that "pollution does not stop at borders," Epal-Ratjen added.

"We export our toxic waste," she said. "So you can have the right to clean and safe and healthy environments in Europe, and then you export your toxic waste" to other regions, such as Africa or Latin America. "There are a lot of elements that really require this right to be recognized as a human right, internationally, [and] to harmonize standards and obligations of states."

Above all, the twin campaigns for a rapporteur on human rights and climate and global recognition of the right to a healthy environment acknowledge how dependent humans are on natural ecosystems.

"You cannot have human rights on a dead planet," Epal-Ratjen said, "and you cannot enjoy human rights in an environment that is polluted, that is threatening your survival each and every day."