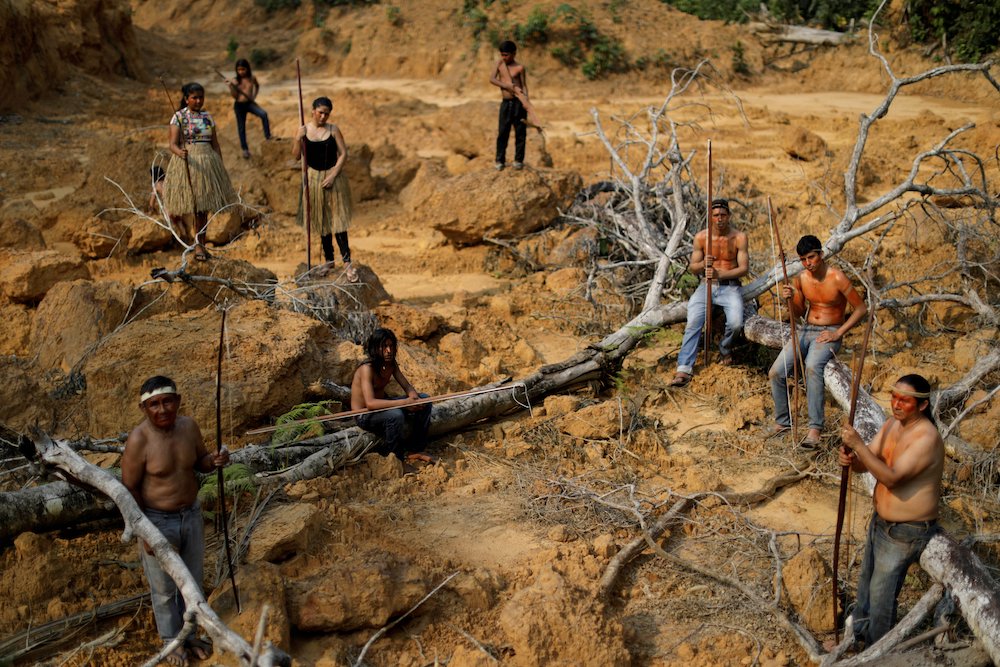 People from the Mura tribe are pictured in a file photo at a deforested area in unmarked Indigenous lands inside the Amazon rainforest near Humaita, Brazil. Bishops working in the Amazon are opposing a bill they say threatens Brazil's rainforest by allowing illegally deforested federal lands to become private holdings. (CNS/Reuters/Ueslei Marcelino)

The threats facing Indigenous people opposing industrial operations on their lands — discrimination, harassment and assassination — all disproportionately affect women. And the coronavirus pandemic has done little to reduce the danger, say Indigenous and faith leaders.

"Indigenous women human rights defenders are at the forefront of the resistance against the effects of extractive industries and, more generally, the model relying on the exploitation of natural resources, including through mining, logging, [agricultural] monocultures and dams," Sandra Epal-Ratjen, international advocacy director for Franciscans International, said at a virtual event April 26.

The webinar sponsored by Franciscans International, which brought together United Nations officials with Indigenous leaders from Brazil, Indonesia, Bangladesh and Guatemala, coincided with the 20th session of the U.N. Permanent Forum on Indigenous Issues, held April 19-30.

The patterns of abuse are similar around the world, Epal-Ratjen said, with "the same attacks on defenders and the same criminalization of the legitimate protests of local communities, and first and foremost, of concerned Indigenous peoples."

Between 2015 and 2019, such conflicts led to at least 1,323 murders and 106 forced disappearances in 81 countries, said Ilze Brands Kehris, U.N. assistant secretary-general for human rights. More than three-fourths of those cases occurred in Latin America.

The human rights organization Front Line Defenders reported 331 murders worldwide in 2020 alone, more than half of them in Colombia. Globally, 69% of the cases involved land, environmental or Indigenous peoples' rights, while 26% of the victims were working specifically on Indigenous people's rights, according to the group's 2020 report.

The attacks often are related to industrial agriculture, extractive industries like mining and logging, and the construction of infrastructure, including dams, Kehris said. Threats and attacks against environmental defenders are probably underreported, because people fear reprisals if they seek justice, she added. 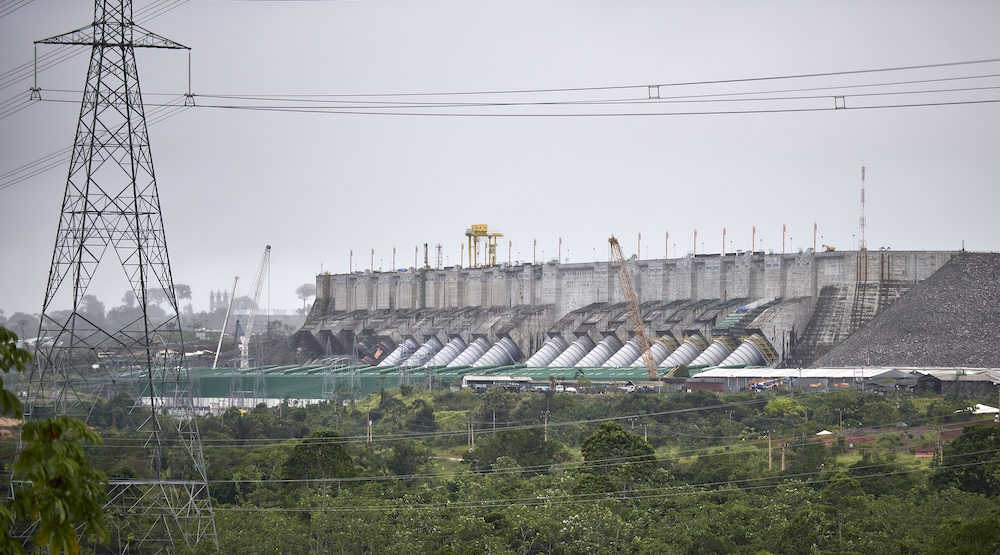 Constructed between 2011 and 2016, the Belo Monte Dam is seen on the Xingu River near Altamira, Brazil. The dam has flooded a swath of Amazon forest, displacing tens of thousands of people, many of them indigenous, and the vegetation flooded by the dam released huge amounts of greenhouse gases. (CNS/Paul Jeffrey)

International treaties require governments to obtain the free, prior and informed consent of Indigenous communities whose territories would be affected by such projects, but laws regulating such consultations are poorly implemented, she said.

There have been several landmark court rulings recently in favor of Indigenous people's territorial rights, but "these, unfortunately, are rare cases," Kehris said.

In Brazil, the Supreme Federal Court agreed in April to review a case involving cancellation of the demarcation of the Guarani Kaiowá people's territory.

And the Tanzanian-based African Court on Human and Peoples' Rights ruled in 2017 that the Kenyan government must allow the Ogiek people to return to their ancestral lands in the Mau Forest. Recent reports, however, indicate that legislation has blocked their access to the forest and evictions have continued, even during the pandemic.

Indeed, some governments have taken advantage of the pandemic to further erode protection for Indigenous territories and other lands. More than 60 bishops working in Brazil's Amazon region have asked the federal legislature to withdraw a bill that would allow private owners to claim rights to illegally deforested federal land.

Such land grabbing is common in other countries, as well, according to participants in the Franciscan-sponsored webinar.

In West Papua, Indonesia, the government is allowing companies to clear forest to plant oil palm plantations, activist Esther Haluk, a member of the Dani people, said during the event. Despite moratoriums on deforestation, regulatory loopholes have allowed the rezoning of some 2.5 million acres of forest since 2000, removing protection and allowing the land to be used for plantations.

When a company moves in, Indigenous people living in the forested area are displaced. The impact on women is especially great, Haluk said, because they are deprived of access to the forests that provide them with food and medicinal plants, and they often become day laborers on the plantations.

The area is militarized and journalists are generally prohibited from traveling there, so little news about the abuses gets out, she added.

In Bangladesh, too, "land grabbing is one of the major problems in Indigenous people's lives," said Chandra Tripura, a member of the Tripura people of the Chittagong Hill Tracts and of the Asia Indigenous Youth Platform.

Indigenous people's lands in that region have been appropriated in the name of development and conservation, she said, and even during the pandemic, developers have been pursuing plans to build a luxury hotel. Encroachment on Indigenous lands violates both Bangladesh's constitution and a peace accord with Hill Tracts peoples negotiated in 1997.

People worry that the projects will affect forests, water supplies, biodiversity and sacred sites. Women will suffer most, because of loss of access to water and to food from the forest, she said. Women are also the targets of violence, including sexual violence, in areas being developed for tourism. 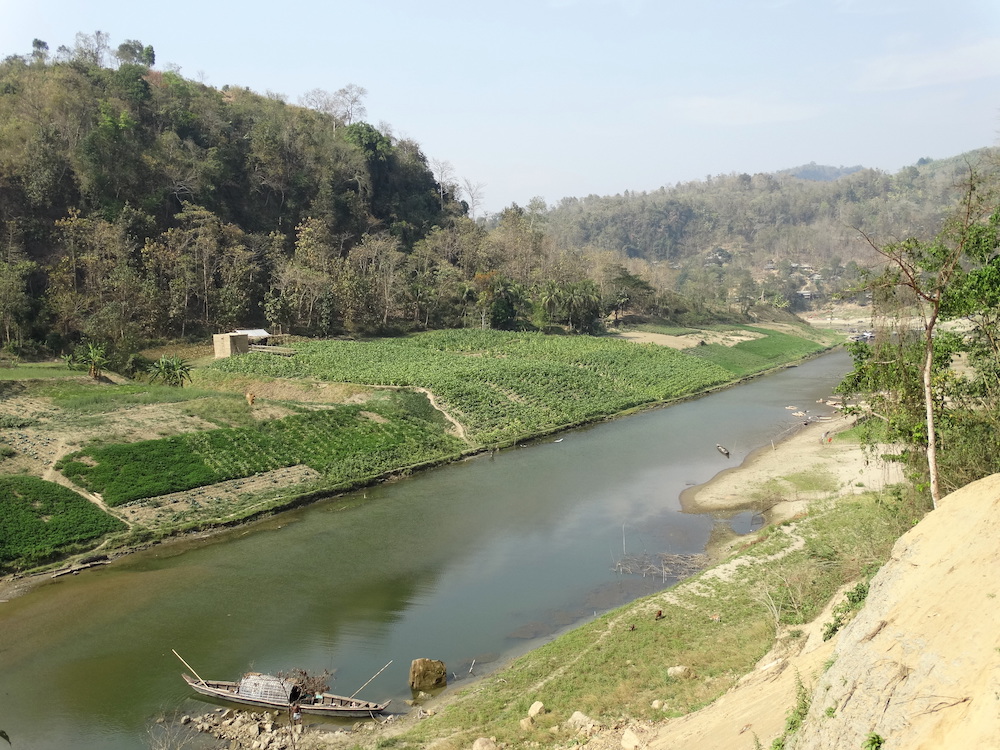 Indigenous people's lands in that region have been appropriated in the name of development and conservation, she said, and even during the pandemic, developers have been pursuing plans to build a luxury hotel. Encroachment on Indigenous lands violates both Bangladesh's constitution and a peace accord with Hill Tracts peoples negotiated in 1997.

People worry that the projects will affect forests, water supplies, biodiversity and sacred sites. Women will suffer most, because of loss of access to water and to food from the forest, she said. Women are also the targets of violence, including sexual violence, in areas being developed for tourism.

Many land grabs around the world involve government complicity and involvement of military forces in support of business interests over local communities' rights, Kehris said.

The U.N. official called for governments to implement more rigorous regulations to ensure that projects do not go ahead without local communities' free, prior and informed consent. Governments should also follow the U.N. Guiding Principles on Business and Human Rights and hold companies accountable, she said.

Haluk, the Indonesian Indigenous activist, said international support is crucial in the struggle to get countries to enforce laws that protect the rights of Indigenous communities.

"For years we have tried, but our voice is not heard," she said of her people's demand for recognition. "We don't have freedom of expression right now, so we are facing more challenges [in being heard]. Our land is being taken, and it's destroying our life. Our life depends on the land."