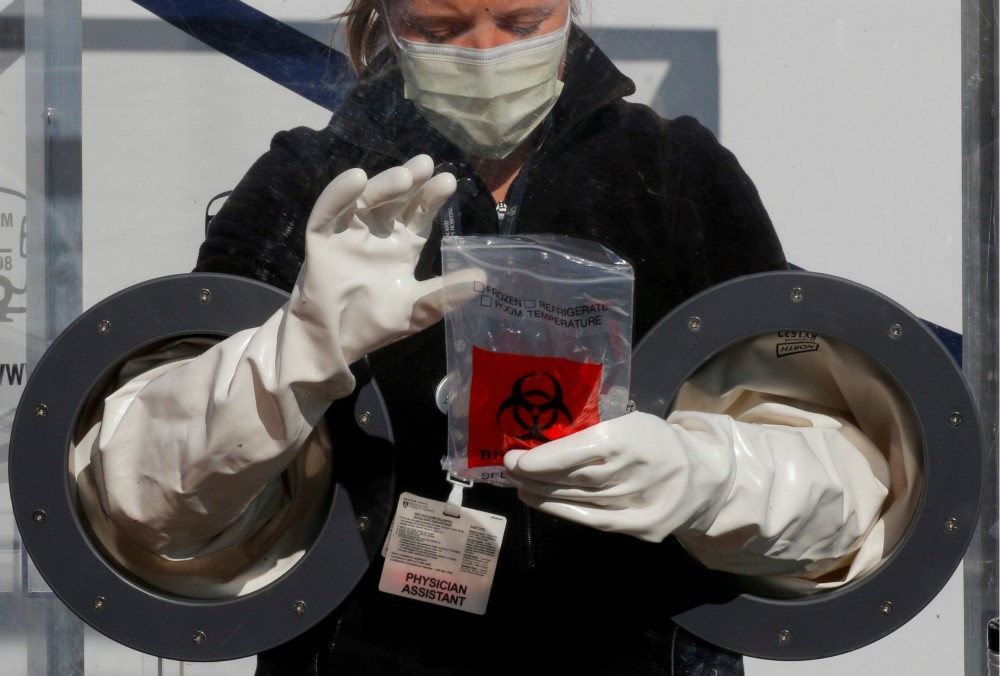 "It is worse, much worse, than you think." This is how journalist David Wallace-Wells opens his 2019 book, The Uninhabitable Earth, about global climate change. This sentence aptly describes the dire circumstances our planet faces now and in the coming years, but it is an equally suitable descriptor for the current and future consequences of the coronavirus pandemic in the wake of political inaction and personal irresponsibility.

This past weekend marked the fifth anniversary of Pope Francis' promulgation of his encyclical "Laudato Si', on Care for Our Common Home." To commemorate the event, the Holy Father has called for a "Laudato Si' Year," which began on Sunday and will continue through May 14, 2021.

In light of this, I have been thinking a lot about Wallace-Wells' book and its scientifically grounded pessimism regarding the future of life on what the pope calls "our common home," especially as we face a global pandemic the likes of which have not been seen in more than a century. Like the impending effects of global climate change in general, the increasing threat and reality of global pandemics are "worse, much worse, than you think."

If you haven't been taking global climate change seriously for the existential threat it is, now is an opportune time — and maybe your last opportunity — to embrace "ecological conversion."

For decades, many people, including women and men of faith, have downplayed or outright dismissed the reality of human consequences on the broader environment. From unmoored explanations for weather pattern disturbances along the lines of "There's always been a natural cycle of climate change" to utterly absurd conspiracy theories claiming climate change is simply a "hoax," people have for various reasons disregarded the ecological writing on the wall.

Perhaps the threat appeared too remote — in terms of geography, time or species most affected — to reach the quotidian experience of many of us.

Perhaps the denial was rooted in financial greed and motivated by capitalistic values that treat everything but the beneficiary as a means to a monetary end.

Perhaps the partisan and sectarian spin applied to climate change, especially in the United States, was mistakenly perceived as a legitimate characterization of what is actually a real danger that knows no political party nor cares about any group affiliation.

Whatever the reason, for too long those downgrading and dismissing the otherwise terrifying risks of climate change have convinced themselves that it doesn't really affect them. (Even some victims of so-called "natural disasters," like flooding and wildfires refuse to see the connection.)

Like so many others distressed by collective inaction and personal ignorance, I have wondered what it would take for more people to start taking this threat seriously. Would there be a point at which something so catastrophic, so anthropocentric, might occur to awaken the climate deniers from their self-delusional slumber?

The current coronavirus pandemic would seemingly fit the bill.

If you don't like the current reality of widespread illness, death, economic collapse and rolling lockdowns, then you should really direct your energies toward combating climate change.

Some people are talking about an eventual return to "normal" life once a vaccine is developed or herd immunity achieved. But the experts caution us to not be so Pollyannaish. Others talk about an ongoing version of the current state of affairs — masks in public, social distancing, restricted travel — as indicative of a "new normal."

But that also fails to take into consideration the fact that we have not reached a new equilibrium. We are not even close. There is nothing "normal" (new or otherwise) about what we are experiencing during this pandemic because, as Wallace-Wells writes, "The truth is actually much scarier. That is, the end of normal; never normal again." Things are bound to get much, much worse, and there are no indications that we can ever return to the historical place from which we came.

Wallace-Wells dedicates a chapter in The Uninhabitable Earth to "Plagues of Warming," in which he outlines the frightening likelihood that what we have witnessed with COVID-19 is merely a foretaste of "existing scourges relocated, rewired, or even re-evolved by [global] warming." He gives several examples of how climate change will only exacerbate future pandemics.

As the planet continues to warm, tropical climate regions will expand and reach new places heretofore unaccustomed to such heat and humidity. Along with the climate shift will come vectors like mosquitos and ticks that transmit diseases such as yellow fever, dengue, malaria and Lyme disease. As Wallace-Wells recounts, each year new outbreaks of these and other illnesses are recorded in locations where they have been previously unseen.

Additionally, these infectious diseases will continue to mutate, wreaking havoc on larger and larger populations in new and, at times, entirely unpredictable ways. Think back to 2016 and the Zika outbreak. Wallace-Wells notes that few people in the so-called global north worried about this disease (or had even heard of it) just a few years ago. He writes: "One reason you hadn't heard about Zika until recently is that it had been trapped in Uganda and Southeast Asia; another is that it did not, until recently, appear to cause birth defects." It seems that this disease mutated in its journey to the Americas, and its consequences became dire in new and frightening ways. 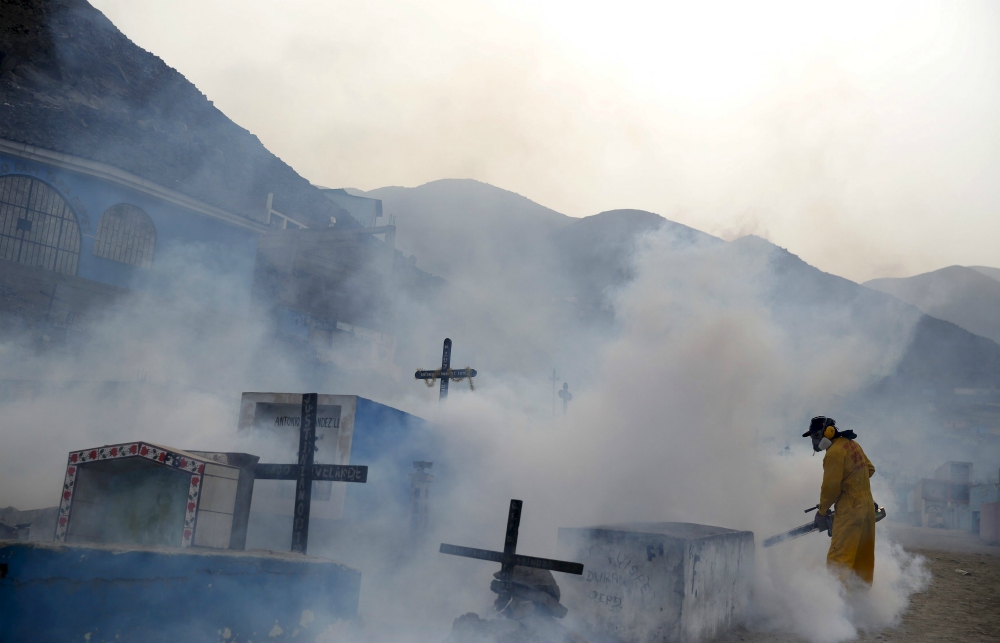 A health worker fumigates for mosquitoes as part of preventive measures against the Zika virus at a cemetery Feb. 1, 2016, near Lima, Peru. (CNS/Reuters/Mariana Bazo)

In the wake of this pandemic, there is understandably a lot of concern about harmful bacteria and viruses like SARS–CoV–2, which causes COVID-19. But what about the billions of "good bacteria" upon which we depend in order to live and perform basic bodily functions like digestion? As Wallace-Wells points out, "More than 99 percent of even those bacteria inside human bodies are presently unknown to science, which means we are operating in near-total ignorance about the effects climate change might have on the bugs in, for instance, our guts."

If you are not concerned about the possibility of climate change directly affecting the trillions of bacteria already living inside you, potentially turning them into mortal enemies instead of necessary friends, take some time to learn about what happened to saiga antelopes in 2015, in which most of the global population died off suddenly from a bacterial infection. If there's anything this virus pandemic should teach us, it is a reminder that we are creatures too, susceptible to all the same things every other organism on this planet is.

What is truly horrifying is the pace at which things can change so dramatically and, quite possibly, irreversibly. Think back to February of this year. Where were you? What were you doing? How were you living? Now think of what everyday life was like just one month later and how it has been ever since.

Even though so much more could have been done to ameliorate the unnecessary and extreme suffering we have witnessed due to political incompetence and poor federal leadership, this pandemic could not have been prevented altogether. The unpredictability of such global crises will continue, and climate change is only going to make all of them worse.

During the Cold War, we talked a lot about the "mutually assured destruction" that kept in check two rival nuclear nation-states. But when it comes to global climate change, there is no such gentlemen's agreement; there is only "universally assured destruction," which threatens all creatures, human and otherwise. If there is a silver lining to the fear and loss occasioned by the current pandemic, may it be that we no longer underestimate the reality and threat of global climate change. For what is at stake is not just life as we know it, but any life at all.

[Franciscan Fr. Daniel P. Horan is the Duns Scotus Chair of Spirituality at Catholic Theological Union in Chicago, where he teaches systematic theology and spirituality. His most recent book is Catholicity and Emerging Personhood: A Contemporary Theological Anthropology, which was recently awarded First Place Theology Book by the Association of Catholic Publishers. Follow him on Twitter: @DanHoranOFM.]

A version of this story appeared in the June 26-July 9, 2020 print issue under the headline: Scared of COVID-19? Fight climate change.