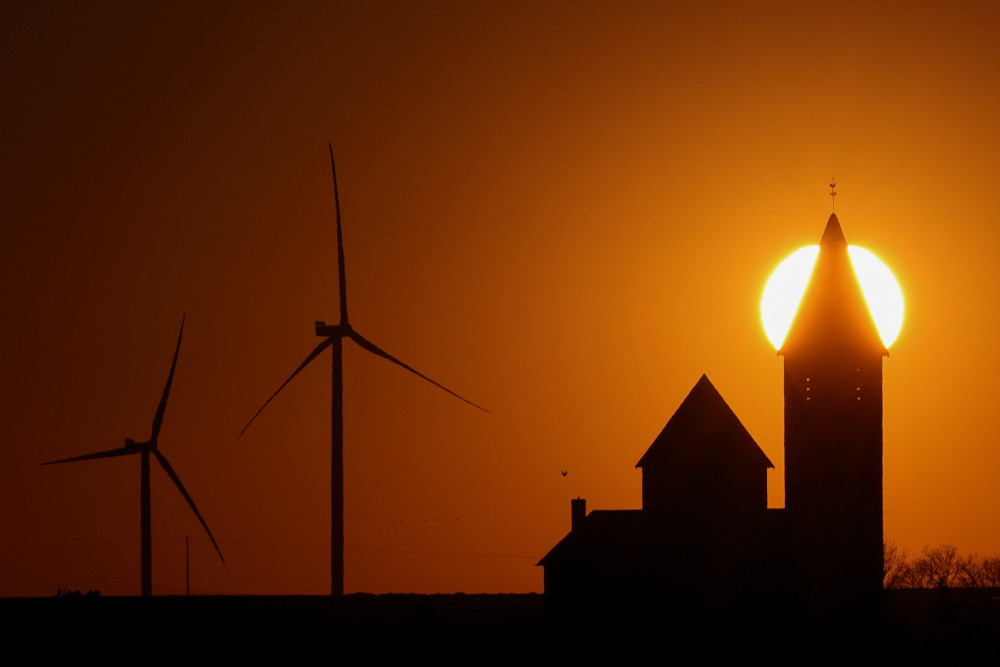 Power-generating windmill turbines and a church are pictured during sunset at a wind park near Cambrai, France, March 18, 2022. (CNS/Reuters/Pascal Rossignol)

France's Catholic bishops have stepped up calls for an "integral ecology" to protect the environment while also warning citizens not to "expect a savior or messiah" after the first round of presidential elections April 10.

"Our Western societies are aware their remarkable development has taken place at the cost of other world regions — that their race forward in growth has been possible only by polluting or destroying other spaces," Archbishop Éric de Moulins-Beaufort of Reims, France, president of the French bishops' conference, said April 8 at the close of the bishops' plenary meeting in Lourdes.

"We must dare to denounce the structures of sin, and proclaim that other ways of human living are possible. ... We are not condemned to behave like predators, sowing death and desolation on the earth," the archbishop said.

His appeal came as French voters prepared for the first round of the presidential election April 10, in which President Emmanuel Macron faces a strong challenge from far-right leader Marine Le Pen.

Archbishop Moulins-Beaufort said a report by the Intergovernmental Panel on Climate Change released April 4 highlights the need for "drastic change in modes of consumption, production, transport and heating."

Saying France was "especially privileged" in having an "easy and fruitful" climate, Archbishop Moulins-Beaufort cautioned that the country also was home to youngsters "living in anxiety about tomorrow," and to "people and families anguished by increasing costs" who faced hardship feeding themselves.

The country's bishops would continue "working for an integral ecology," Archbishop Moulins-Beaufort said, while monitoring the "collective progress" achieved by other Catholic dioceses and parishes.

"The love of Christ urges us to be close to distant brothers and sisters who are the first to suffer the impact of climate change, to be close to all forms of life, rejoicing in our interdependence," said the archbishop, who was reelected for a second term during the plenary.

The four-day meeting took place amid the final days of campaigning before voters go to the polls. Election observers expect that Le Pen, who has campaigned on an anti-European Union, anti-NATO and pro-Russia platform, will face center-right Macron in an April 24 runoff.

In his speech, Archbishop Moulins-Beaufort said Catholics should also remember all political power was "relativized and put in its place" by Christ, adding that France would not develop "by pretending to surround itself with walls."

"We will not elect a savior or messiah, or someone embodying all the good to be done. We will choose a political leader, man or woman, who should lead our country in uncertain times," he said.

"They will not have a solution for everything, be able to prevent all immigration, or to invent infinitely renewable, transportable, efficient energy. Nor will they be able to change hearts."

The plenary also received reports on the implementation of church measures announced following an October report, which estimated 330,000 children had been abused since the 1950s by French priests or church employees.

Archbishop Moulins-Beaufort said work remained to be done in helping abuse victims, but added that the bishops had discovered "how right and good it is to recognize one's sin," and begin "emerging from complicity with the forces of death and the slavery of predation.