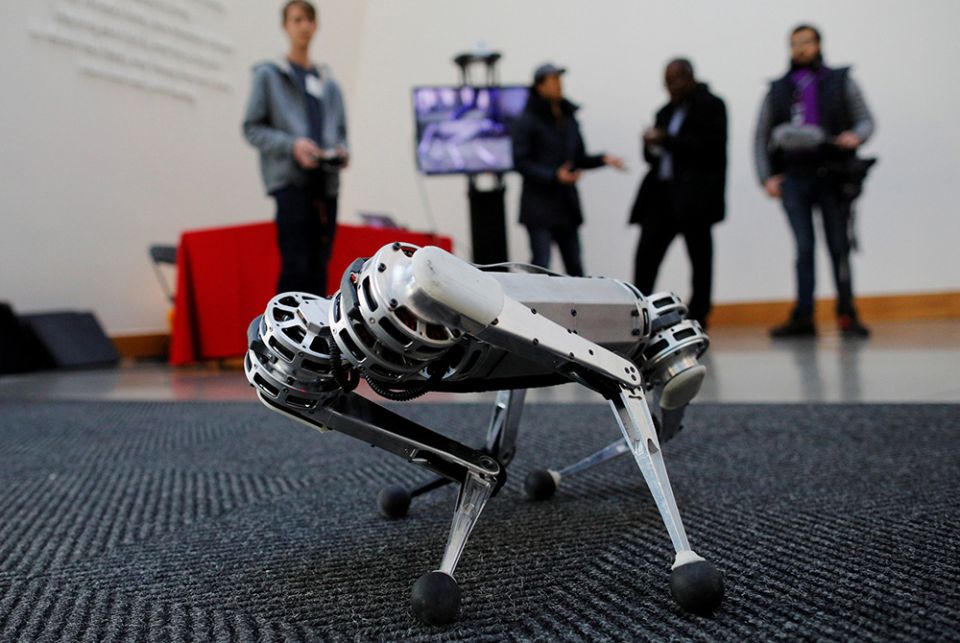 Students demonstrate the Mini Cheetah, a quadruped robot, during presentations at the Massachusetts Institute of Technology Feb. 26, 2019, in Cambridge. In his book "Robots, Ethics and the Future of Jobs," Fr. Seán McDonagh predicts that millions of jobs will be displaced by artificial intelligence and new technologies. (CNS/Brian Snyder, Reuters) 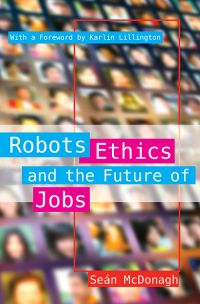 ROBOTS, ETHICS AND THE FUTURE OF JOBS
By Seán McDonagh
160 pages; Messenger Publications
$24.95

The dramatic loss of work during the COVID-19 pandemic may be a foretaste of the mass unemployment coming down the line in the near future as millions of jobs are displaced by robots, artificial intelligence or AI, and new technologies, according to Irish eco-theologian Fr. Seán McDonagh.

In his new book, Robots, Ethics and the Future of Jobs, McDonagh, who has written several pioneering works on the environment, predicts that in this emerging world, only 50% of people will have jobs. With increased use of AI and automation, many people will not be able to find paid work in areas such as retailing, caring roles, agriculture and financial services.

"If we rely purely on market forces, we will be very unprepared for the impact this will have on human society," McDonagh, a Columban missionary who ministered to the T'Boli people in the Philippines in the 1970s and 1980s, warns. Millions of people globally will be impoverished, as happened during the First Industrial Revolution in the 19th century.

"The Fourth Industrial Revolution is coming fast on us and will change our way of life, just as all previous revolutions did," John Sweeney, emeritus professor of geography at the National University of Ireland in Maynooth, warned at the virtual launch of McDonagh's book on March 4. 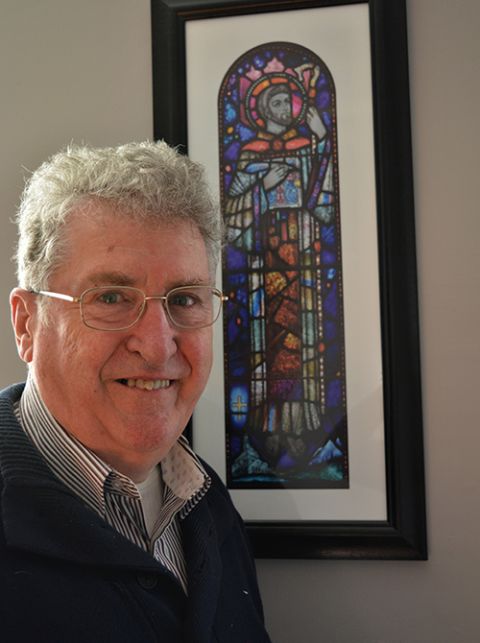 Fr. Seán McDonagh, eco-theologian and a Columban missionary, is pictured in front of an image of St. Columban. (Sarah Mac Donald)

Sweeney, who has written extensively on climatology and climate change, noted that "when you take a large number of the population out of employment, you create preconditions for great unrest particularly if 40 to 50% of the population have no jobs."

He described McDonagh's book as a "prophecy of where we are going" and said its central message is that we shouldn't "stumble into the future with these very powerful technologies without having some kind of a moral compass and some kind of an ethics guide to give us some control and guidance as to where we're going."

In Robots, Ethics and the Future of Jobs, McDonagh draws on the experience of the COVID-19 pandemic to spotlight how people might react to being out of work on a mass scale. He notes how after a few weeks of economic shutdown at the start of the lockdown, large rallies took place in some U.S. cities, with many of the participants carrying arms and demanding that the economy be opened up to allow them back to work.

The missionary, whose other books include To Care for the Earth: A Call to a New Theology, Climate Change: The Challenge to All of Us and The Greening of the Church, highlights how a job gives many people a sense of identity and consequently, the lack of a job can affect a person's physical and mental health.

In "Laudato Si', on Care for Our Common Home," an encyclical for which McDonagh acted as an adviser, Pope Francis writes:

"We were created with a vocation to work. The goal should not be that technological progress increasingly replaces human work, for this would be detrimental to humanity. Work is a necessity, part of the meaning of life on this earth, a path to growth, human development and personal fulfilment. … Yet the orientation of the economy has favored a kind of technological progress in which the costs of production are reduced by laying off workers and replacing them with machines. The loss of jobs also has a negative impact in the economy 'through the progressive erosion of social capital: the network of relationships of trust, dependability, and respect for rules, all of which are indispensable for any form of civil coexistence' [citing Benedict XVI] " (Paragraph 128).

Robots, Ethics and the Future of Jobs highlights the need to address the potential repercussions of these developing technologies. Lack of regulation and institutional protections leaves an ethical vacuum which will erode human rights, McDonagh argues.

According to Sweeney, "As we enter the brave new world where control and automation potentially remove our hard-fought freedoms as well as our jobs, this book asks searching questions of how society should respond ethically to the threats posed."

Speaking to EarthBeat, McDonagh reiterated his view that people of faith should insist that AI be understood as a public good in society, and that its regulation not be left to powerful digital corporations in the U.S. and China, which may not be subject to governmental or adequate regulatory processes.

"I am not against technology," McDonagh said. "I had a cataract operation recently. In the book I give the example of 12 people with cataracts. Six of them underwent traditional cataract surgery by top class surgeons and the other six by precision laser surgery and these got the better procedure because every surgeon's hand will move a little bit whereas the technology brings precision to a new level. So there are extraordinary benefits — but there are extraordinary problems in terms of privacy." 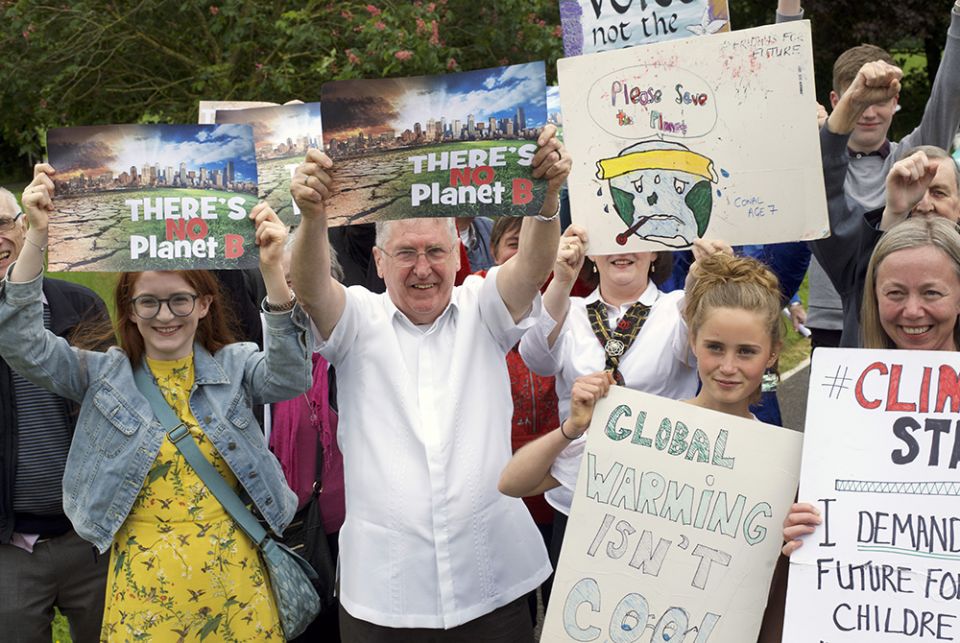 Fr. Seán McDonagh leads a climate strike in the grounds of Dalgan Park in Ireland, in this 2019 photo (Courtesy of Columban Missionaries)

He is particularly concerned about surveillance capitalism.

"Google knows more about you than you know about yourself. It retains your information when you have long forgotten it. There is so little regulation around global corporations like Facebook selling your data and their control of so much advertising," McDonagh said.

"Look at what happened Australia and the attempt to 'unfriend' that country — that is how powerful these billion-dollar corporations are," he added. "They push back against any efforts to curb them, and fines are a drop in the ocean to them. We cannot allow them to drive this on their terms."

For McDonagh, the challenge is how to address this new situation in a way that will promote communities in the future.

"Because if we allow the corporations and money to drive it, we're going right back into the First Industrial Revolution, where you had a small group of people who were extraordinarily rich, and the rest were paupers," he said. "It will also destroy human communities. Is that what we want to happen?"

He believes governments must lead the way in regulating digital monopolies and must introduce a universal basic income to help offset the financial cost to workers replaced by technology. The eco-theologian told EarthBeat he would like to see something like the European Union's COVID-19 fund to help alleviate the economic impact of coming job losses.

But while jobs will be lost, there will still be plenty of work, and a universal basic income could be linked to people's participation in projects focused on climate justice and care for the Earth, he suggests.

The state of the planet's oceans is a particular concern. "The damage that we have done to the oceans in the last seven years is absolutely horrendous. We have fished half the fish out of the sea. We're destroying phytoplankton at an extraordinary rate. People talk about the Amazon and the forests of Central Africa as being the lungs of the world. The lungs of the world are phytoplankton; scientists estimate that phytoplankton contribute over 50% of the oxygen in Earth's atmosphere."

COVID-19 lockdowns raised hopes that the economic slowdown would yield a major drop in carbon dioxide emissions. Sadly, that didn't materialize to the extent hoped for, proving that the challenge is far more complex.

While some scientists argue that AI can play a role in tackling climate change by forecasting the supply of and demand for power in the grid and improving the scheduling of renewables, thus reducing dependence on fossil fuels, Seán McDonagh is wary. He believes there needs to be far greater scrutiny of AI systems and global data centers' heavy energy consumption.

"It's huge. We're building a number of these data centers in Ireland, and we need more information about their consumption of energy and whether they are using fossil fuels," he said.

He also refers to an article by Donna Lu in New Scientist that highlighted how the creation and training of an AI system is energy intensive because it involves the processing of vast amounts of data. According to Lu, estimates suggest that "the carbon footprint of training a single AI is as much as 284 tonnes of carbon dioxide equivalent" to "five times the lifetime emissions of an average car."

For McDonagh, who celebrated the golden jubilee of his ordination to the priesthood in 2019, it all comes down to balanced relationships and ethical regulation.

"What I am trying to highlight is the importance of good relationship with our God, with our fellow human beings and with all creation," he said. "And if we don't achieve that, we're in real trouble."

A version of this story appeared in the June 25-July 8 print issue under the headline: Fr. Seán McDonagh’s book a "prophecy of where we are going" .