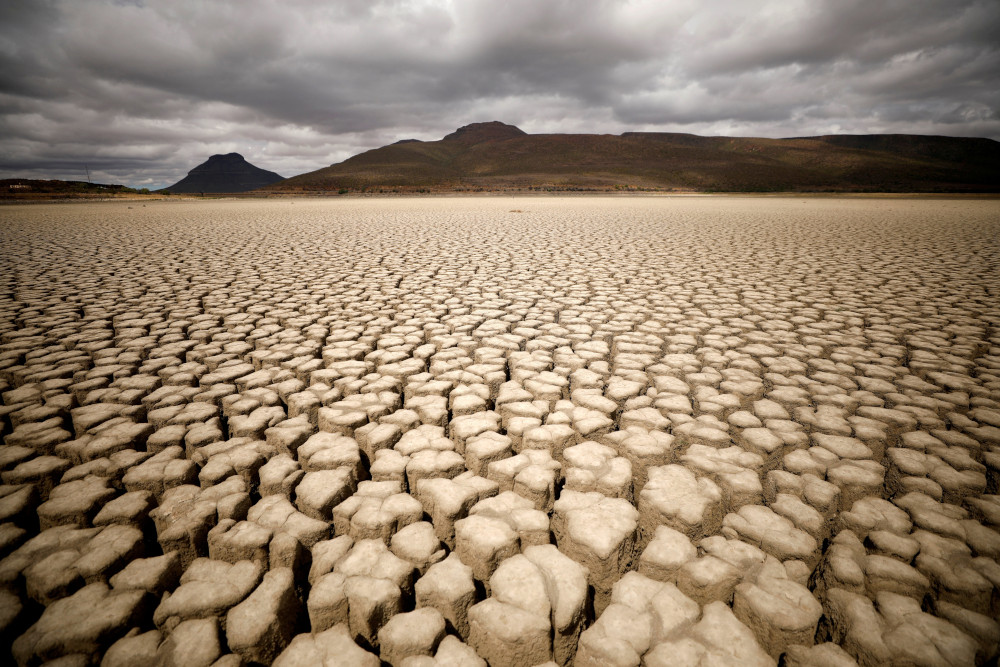 Clouds gather but produce no rain as cracks are seen in the dried-up municipal dam in drought-stricken Graaff-Reinet, South Africa, Nov.14, 2019. In a July 13, 2022, message to participants of a Vatican conference on climate change, Pope Francis said humanity has a "moral obligation" to protect the environment and combat climate change. (CNS/Reuters/Mike Hutchings)

The care of the environment and the fight against climate change is not a lofty goal for humanity but a moral imperative, Pope Francis said.

The worsening climate crisis can no longer be ignored, and it is up to all human beings, who were entrusted by God as "stewards of his gift of his creation," to act, the pope said in a message July 13 to participants at a Vatican conference on climate change.

"Care for our common home, even apart from considerations of the effects of climate change, is not simply a utilitarian endeavor but a moral obligation for all men and women as children of God," the pope said. "With this in mind, each of us must ask: 'What kind of world do we want for ourselves and for those who will come after us?'"

The July 13–14 conference, titled "Resilience of People and Ecosystems under Climate Stress," was sponsored by the Pontifical Academy of Sciences.

According to the academy's website, the conference aimed to "bring researchers, policymakers and faith leaders together to understand the scientific and societal challenges of climate change and develop solutions for enabling resilient people and resilient ecosystems."

In his message, the pope said climate change has reached a state of emergency that not only reshapes "industrial and agricultural systems" but also negatively affects "the global human family, especially the poor and those living on the economic peripheries of our world."

"Nowadays we are facing two challenges: lessening climate risks by reducing emissions and assisting and enabling people to adapt to progressively worsening changes to the climate," he said. "These challenges call us to think of a multi-dimensional approach to protecting both individuals and our planet."

Citing his 2015 encyclical "Laudato Si', on Care for Our Common Home," the pope said addressing the climate crisis requires an "ecological conversion" marked by a "change of mentality and a commitment to work for the resilience of people and the ecosystems in which they live."

This conversion, he added, "has three important spiritual elements."

"The first entails gratitude for God's loving and generous gift of creation. The second calls for acknowledging that we are joined in a universal communion with one another and with the rest of the world's creatures. The third involves addressing environmental problems not as isolated individuals but in solidarity as a community," the pope wrote.

Religious, political, social and cultural leaders, he said, must work together to form "courageous, cooperative and farsighted efforts" to address the current crisis, including reducing emissions and providing technological assistance to poorer nations.

Leaders also must ensure "access to clean energy and drinkable water," commit to sustainable development and promote "sober lifestyles aimed at preserving the world's natural resources and the provision of education and health care to the poorest and most vulnerable of the global population."

The pope also expressed concerns that the loss of biodiversity as well as wars in various countries around the world will "bring with them harmful consequences for human survival and well-being, including problems of food security and increasing pollution."

"These crises, along with that of the earth's climate, show that 'everything is connected' and that promoting the long-term common good of our planet is essential to genuine ecological conversion," he said.

Pope Francis also said the Vatican's recent accession to the Paris Agreement was approved in the hope that "humanity at the dawn of the 21st century will be remembered for having generously shouldered its grave responsibilities."

"In working together, men and women of good will can address the scale and complexity of the issues that lie before us, protect the human family and God's gift of creation from climate extremes and foster the goods of justice and peace," the pope said.