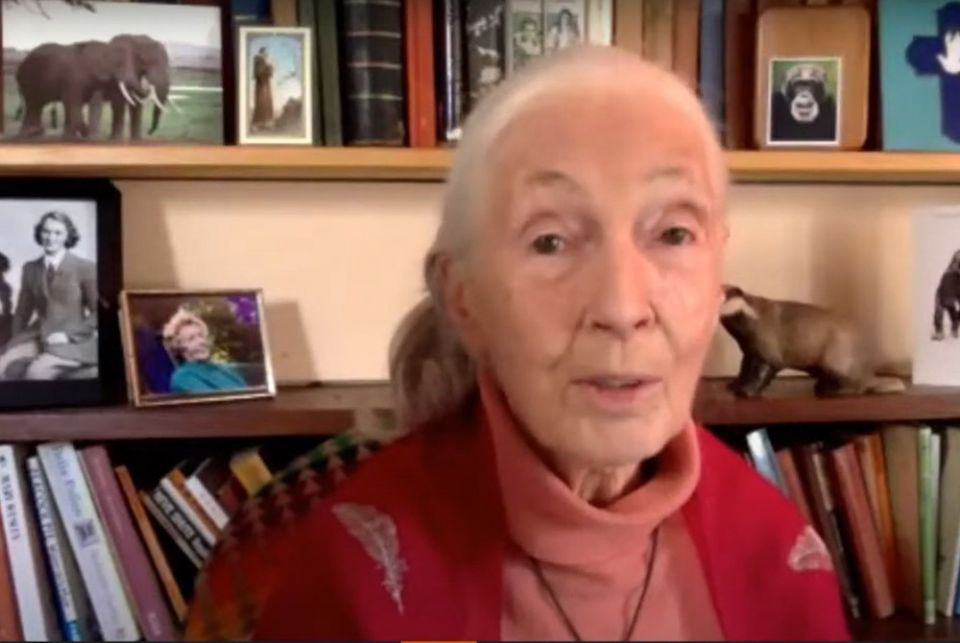 Jane Goodall, the famed scientist and conservationist for her decades of work with chimpanzees, speaks during a Vatican webinar on biodiversity April 20. Despite the multitude of environmental crises facing the planet, Goodall said she had hope humanity can make the necessary shifts, in part because of Pope Francis, "because in that position as pope, with the whole of the Catholic Church around the world, his stand on the environment really has made a big difference." (EarthBeat screenshot)

A Vatican-sponsored webinar this week paired famed primatologist Jane Goodall with Cardinal Peter Turkson for a conversation about biodiversity and its importance in preserving life on Earth, not just for people but for the entire planet.

Goodall joined Turkson, prefect for the Vatican Dicastery for Promoting Integral Human Development, in a webinar April 20 spotlighting the plights of species and ecosystems ahead of a key United Nations summit on biodiversity scheduled for October.

The Catholic prelate and the primatologist reviewed a range of topics, from the responsibility humans have to protect ecosystems, to the ways humans' disrespect for nature can invariably hurt themselves, whether through climate change or pandemics.

"We've got this one, beautiful, green and blue planet created by God. How is it possible that the most intellectual creature to ever walk on this planet is destroying its only home?" Goodall asked.

Goodall, who before beginning remarks shared a greeting in chimpanzee, said that even amid the multitude of environmental crises, she draws hope — from young people, science and the pope — that humanity can change its ways.

The threats facing the planet's biodiversity — its ecosystems and the living species inhabiting them — have come into sharper focus in recent years. Earth has seen five mass extinctions, and many scientists say a sixth is under way, and possibly accelerating.

A 2019 U.N. report projected that 1 million of the estimated 8 million species on Earth face extinction by the end of this century, a disappearance hastened by changes in humans' use of the land and sea, exploitation of species, climate change and invasive species.

"Today, there is a devastating deconstruction of God's gift of creation," Turkson said.

The cardinal said that in the Bible biodiversity represents the form that God's creation takes, and humans were given the task of looking after nature. He said church teaching recognizes the intrinsic value and purpose of each of the plants and animals that make up the tapestry of the Earth.

But as human activities increasingly threaten plant and animal species with extinction, humanity has run up "a serious and huge ecological debt," Turkson said.

"The cost of the damage caused by the human exploitation of nature is much greater than the economic benefits that are obtained. Where certain species are destroyed or seriously harmed, the values involved are incalculable," he said.

Through its TACARE program, the Jane Goodall Institute has worked with local communities around the globe to put into action holistic, community-based conservation to restore overused land without pesticides or other chemicals. Goodall said it has helped people see the interconnectedness among species and how protecting the environment benefits not just wildlife, but people, too. (Pronounced "take care," TACARE stands for Lake Tanganyika Catchment Reforestation and Education.)

"As one of these species becomes extinct, it tears a hole in that tapestry. And as more and more holes are torn, as these species become extinct with horrifying rapidity, in the end we're going to be left with a tapestry so torn that the ecosystem will collapse. And that is what we depend on for our lives," Goodall said.

Jane Goodall, the famed primatologist, and Cardinal Peter Turkson, pictured at right center, took part in a Vatican-sponsored webinar April 20 on the importance of preserving biodiversity for people and the planet. The event comes ahead of COP 15, the United Nations biodiversity conference set for October in China. (EarthBeat screenshot)

The primatologist said she believes the window remains open to save chimpanzees and other species from extinction, but it begins with reducing "unsustainable lifestyles" that destroy the environment and the conditions that feed them. Doing this includes moving away from fossil fuels, phasing out industrial agriculture and factory farms, and moving toward permaculture practices.

"We have to think about the choices we make each day," she said. "We go to the supermarket to buy food. Let's ask ourselves, 'Where did it come from? Did its production harm the environment? Was it cruel to animals? Is it cheap because of inequitable wages in other parts of the world?' And if the answer is yes, yes and yes, don't buy it."

Those changes may cause a product to cost a bit more, "but that means we'll value it more and waste less," Goodall said. Several things give her hope that such changes are still possible.

One is the concern for nature she sees in young people, including those who participate in her institute's Roots and Shoots program, and another lies in the industrial and scientific advances she has seen throughout her 89-year life. She also draws hope from the pope.

"One of my reasons for hope is Pope Francis, because in that position as pope, with the whole of the Catholic Church around the world, his stand on the environment really has made a big difference," she said, adding, "and the other reason for hope is that the other religions, too, are beginning to talk about the environment more and more."

"Let's ask ourselves, 'Where did it come from? Did its production harm the environment? Was it cruel to animals? Is it cheap because of inequitable wages in other parts of the world?' And if the answer is yes, yes and yes, don't buy it."
—Jane Goodall

The webinar was organized by the integral human development dicastery and the Vatican's COVID-19 Commission's ecological task force, along with two dozen partner organizations, including Global Catholic Climate Movement, CIDSE, the International Union of Superiors General and the Parliament of the World's Religions. The event served as preparation for COP 15, the U.N. biodiversity conference scheduled for October in Kunming, China.

The Vatican, which will take part in the biodiversity conference, has outlined several goals for the gathering, among them increasing protected areas, valuing nature's contributions to people, and the fair and equitable sharing of benefits from biological resources.

But primarily, Turkson said, the Vatican's role begins with raising awareness about the twin cries of the poor and the earth resulting from human abuses of nature and inviting people to ecological citizenship and ecological conversion.

"Ecological conversion would be a change of mentality, a change of outlook, a change of lifestyle and habit, moving from a desire to control and dominate, to a desire to safeguard, to protect. This is what we ensure and we propose as a way of safeguarding biodiversity for all of us," Turkson said.

Holding the biodiversity conference in China is likely to place further scrutiny on the origins of the coronavirus pandemic. Scientists and health officials continue to investigate how COVID-19 emerged, with a leading theory tracing it to Wuhan, China, possibly to a market where live wild animals were sold. 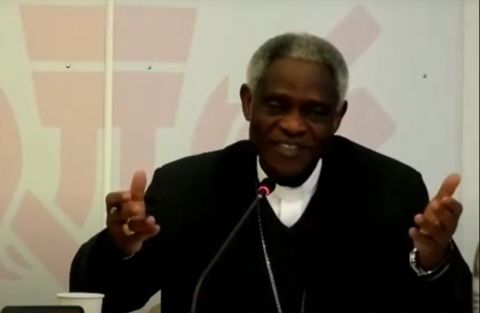 Goodall said the destruction of ecosystems and habitats has pushed animals into closer contact with humans. This proximity, in places like wildlife markets and factory farms, creates conditions for a pathogen to pass from animals to people.

"We brought it in large part on ourselves by our absolute disrespect of animals and our disrespect of the natural world," she said.

Turkson said that "the current pandemic alerts us to the fact that when nature is sick, humanity itself is very sick."

Pope Benedict XVI made that connection in 2009, in his encyclical Caritas en Veritate, the cardinal added, in which the now-emeritus pope wrote, "The way humanity treats the environment influences the way it treats itself, and vice versa."

"The health of humanity then depends on that of nature," Turkson said. "When nature is sick as a result of human-caused or human-centered pollution and destruction, humanity also invariably suffers. This shows that everything is interconnected."

Read this next: This Earth Day, Jane Goodall continues to shape the narrative