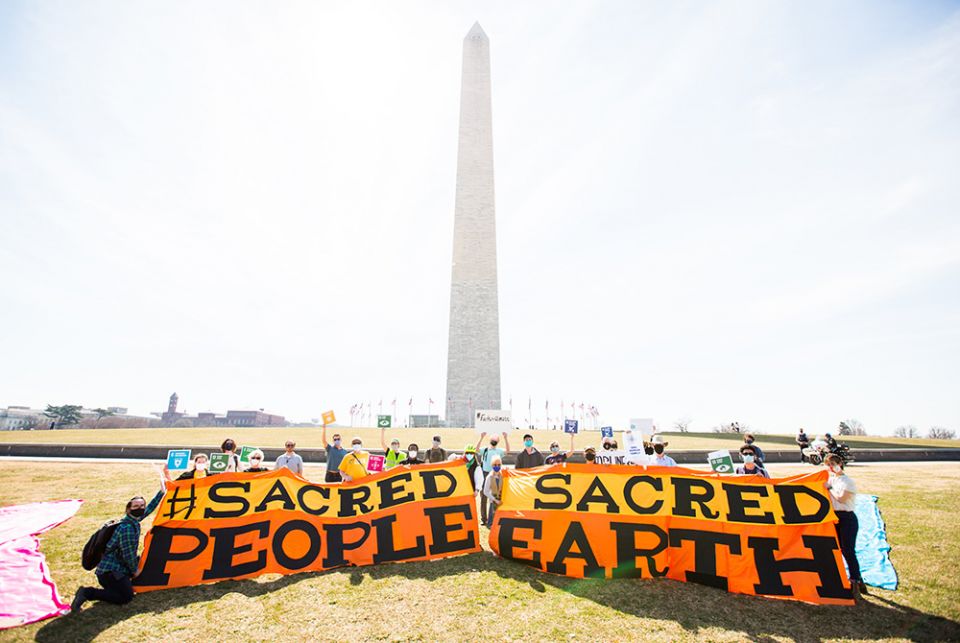 On March 11, people of faith around the world staged hundreds of events, including at the Washington Memorial in Washington, D.C., as part of the "Sacred People, Sacred Earth" day of demonstrations calling on governments and banks to do more to address climate change. (Les Talusan/GreenFaith International Network)

Church bells rang and ceremonial gongs clanged in demonstrations around the globe Thursday as faith groups called for governments and financial institutions to take 10 specific steps to accelerate action on climate change, including an immediate end to support for fossil fuel and activities that cause deforestation.

More than 400 events were held in 42 countries as part of the multifaith day of action, called "Sacred People, Sacred Earth." It was the first major initiative organized by the recently formed GreenFaith International Network, a partnership of faith organizations in 14 countries coordinated by the U.S.-based GreenFaith environmental coalition.

The Rev. Fletcher Harper, an Episcopal minister and executive director of GreenFaith, told EarthBeat the day represented the beginning of an "escalation and intensification" by the faith community to increase pressure on policymakers and the financial sector to close the gap between current climate pledges and what is needed to limit global temperature rise to 1.5 degrees Celsius, the more ambitious target set in the Paris Agreement.

"I think that there is a growing frustration, impatience and even anger that political leaders and financial institutions have failed as badly as they have to address this problem," he said. "The science is getting old on this now. This issue has been staring us in the face for 30 years."

Religious groups have been calling for action for an equal amount of time, he added. 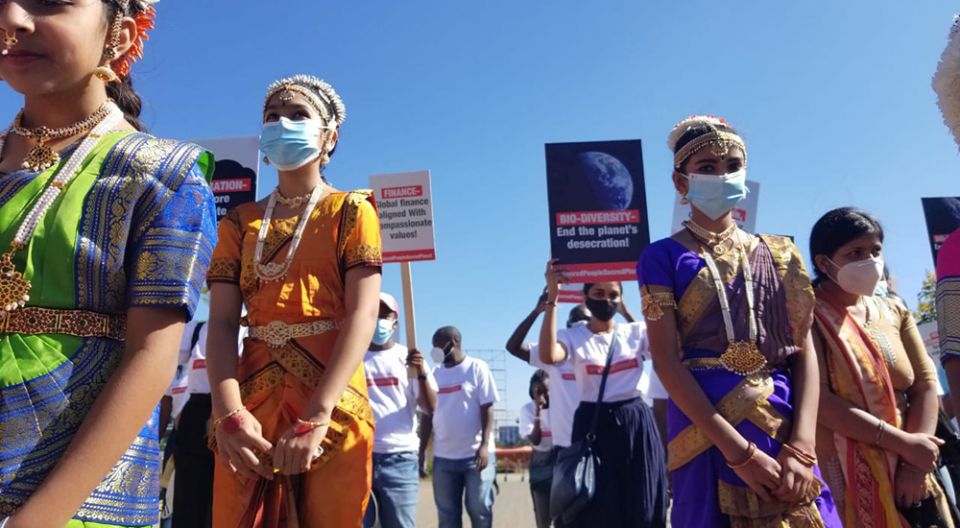 A group of Hindu women join a march in Ngong, Kenya, outside Nairobi as part of "Sacred People, Sacred Earth" demonstrations around the world March 11. Organizers called it the largest day of multifaith actions pressuring governments and banks to enact 10 demands to address climate change. (GreenFaith International Network)

At the center of the day was a list of 10 demands faith groups say are essential if governments and financial institutions are to respond to climate change in a way that reflects the seriousness of the science. The demands were issued with an eye toward negotiations happening ahead of the COP26 U.N. climate summit, set for November in Glasgow, Scotland.

The demands call for:

"A far better future is possible if our collective response to the pandemic and the climate crisis is guided by compassion, love and justice at a scale that meets this moment. We must not only provide the relief that so many need to survive. We must create a new culture, politics and economy of life that heals people and planet," reads a statement signed by more than 300 religious leaders.

Among the signatories is Cardinal Peter Turkson, head of the Vatican Dicastery for Promoting Integral Human Development.

The "Sacred People, Sacred Earth" events around the world took different forms, but sought to deliver the same message around the demands.

One of the first events was held in Australia, where a multifaith group demonstrated outside the office of Prime Minister Scott Morrison and urged him to accelerate the country's climate plans. A mosque in Indonesia held a Muslim reflection on the environment. People gathered with signs on a rooftop in Cameroon, while others in Sierra Leone took part in an environmental project.

Four Indigenous women in Chile called on their government to stop repressing the rights of their people and other defenders of the environment. In Belgium, there were 11 minutes of silence for the climate, and people banged on pots and pans as church bells rang in a rural English village.

In the United States, church bells rang across the Sun Belt, from Tallahassee to San Diego. In the nation's capital, Unitarian Universalists and members of Interfaith Power and Light gathered near the Washington Monument, where they displayed banners and voiced their support for Indigenous tribes opposing the Enbridge Line 3 pipeline in northern Minnesota, which they say violates treaty rights and crosses sacred land. They called on President Joe Biden to halt the project as he did the Keystone XL transnational pipeline.

Hundreds of people joined a rally March 11 in St. Paul, Minnesota, opposing the Enbridge Line 3 pipeline that is being constructed in the northern part of the state. The event was one of hundreds held worldwide as part of the "Sacred People, Sacred Earth" day of multifaith demonstrations for calling for increased governmental action on climate change. (Minnesota Interfaith Power and Light)

"We need this administration to step up and stop Line 3," the Rev. Susan Hendershot, president of Interfaith Power and Light, said at the event.

Hundreds more protested Line 3 in St. Paul, Minnesota, near the Mississippi River, under which Line 3 is set to cross. Opponents fear that as the winter ice melts, construction will move forward even as legal challenges continue.

"How could God not be disappointed at a system that puts crude oil underneath the headwaters of the Mississippi River — one of the world's most beautiful waterways," the Rev. Jim Bear Jacobs, a member of the Stockbridge-Munsee Mohican Nation and the Minnesota Council of Churches, said in a statement. 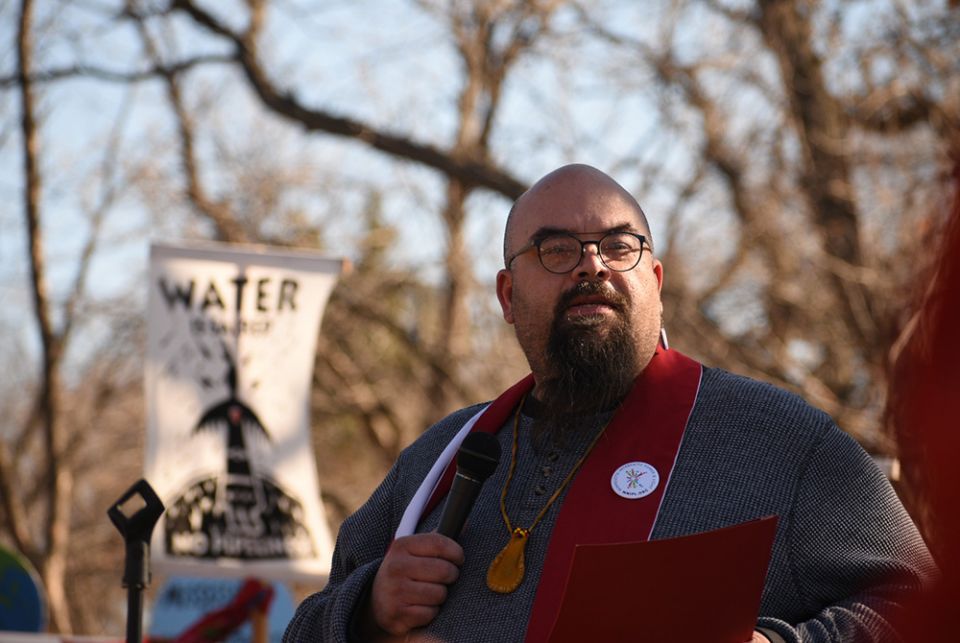 The Rev. Jim Bear Jacobs speaks during a rally March 11 in St. Paul, Minnesota, that was part of "Sacred People, Sacred Earth" events for increased climate action around the globe. (Minnesota Interfaith Power and Light)

Harper, who joined a small, masked march in Secaucus, New Jersey, said faith groups are waiting to see what specific policies on climate the Biden administration develops, but intends to hold it to the promises the nation's second Catholic president made during the campaign.

The Episcopal minister said the current times, as global temperatures continue to rise and fossil fuel projects move forward, require leaders with "strong moral compasses." He added that the faith groups participating in "Sacred People, Sacred Earth" events are determined to hold heads of state to doing what is necessary to preserve the planet and the well-being of people and species.

"I think their sense is that they have played nice for a while, and they need to let leaders know that the religious community really means business about this," he said.