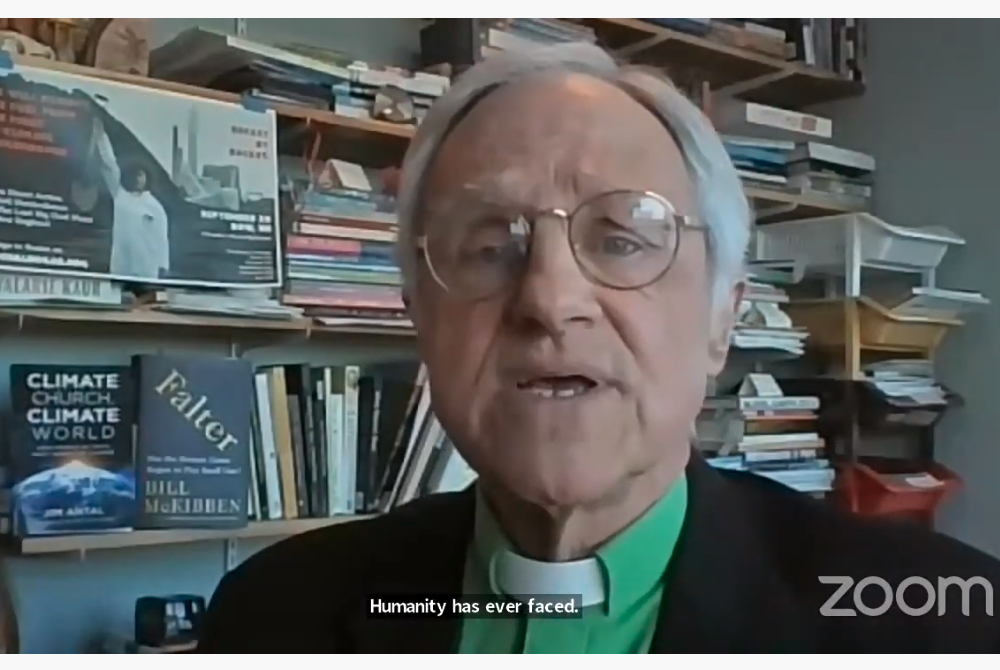 The global faith community has a "pivotal role to play" in helping humanity address the challenges posed by climate change and see them as an opportunity to preserve the planet for future generations, a prominent Christian climate advocate said this week.

The Rev. Jim Antal, a noted public theologian and special adviser on climate justice for the United Church of Christ, made the comments March 2 in a "State of Creation" online event hosted by the United Church of Christ. Antal has been a leading member of the faith community on environmental issues, having been arrested protesting the Keystone XL transnational pipeline and introducing a resolution in 2013 for the UCC to divest its finances from fossil fuels. (Antal is a member of EarthBeat's advisory panel.)

Antal began his speech by saying, "God's creation, life as humans have always known it on Earth, our common home, is in jeopardy."

He listed scientific reports that show rapid rates of glacier melting, species extinctions accelerating and critical climate tipping points nearing. He called the four years of environmental rollbacks under the Trump administration an "assault" on all facets of the environment, and lauded President Joe Biden's all-of-government approach to climate policy.

"People of every faith persuasion have a pivotal role to play in assuring that humanity bends the moral arc of the universe toward justice and interdependence, even as we bend the ecological arc of the earth toward sustainability, renewal and restoration."
—Rev. Jim Antal

Where science and economics have come up short in compelling action, Antal said, religion can offer the inspiration needed for wider swaths of society to address the challenge of climate change.

"People of every faith persuasion have a pivotal role to play in assuring that humanity bends the moral arc of the universe toward justice and interdependence, even as we bend the ecological arc of the earth toward sustainability, renewal and restoration," Antal said.

He added that the United Church of Christ, whose leadership on environmental issues dates back to its 1987 report on toxic waste sites and race, was "made for just such a time as this, in the hope of igniting our resolve to initiate a new moral era."

Antal said faith communities must make God's call to restore creation and advance justice in all its forms a central part of their identities. A first step, he suggested, is actually talking about climate change in houses of worship, whether in sermons or testimonies from the congregation. Antal then outlined four specific steps:

Antal's speech came nine days before what's been billed as the largest day of faith-based climate action. On March 11, hundreds of demonstrations are planned as part of the "Sacred People, Sacred Earth" event organized by the international climate interfaith organization GreenFaith. The day is meant to draw attention to a list of 10 climate justice demands aimed at world governments, including transitioning to 100% renewable energy for all, protecting the rights of Indigenous communities and reaching net-zero emissions in wealthy countries by 2030.

"Let's be clear, this is not a partisan exercise," Antal said. "It is right and good for the church to advocate for the restoration of creation, the elimination of racial inequity and the transformation of economic inequality."

He also called on UCC congregations to form creation justice task forces, partner with local environmental coalitions, divest endowments from fossil fuel stocks and join actions against new fossil fuel projects. He suggested they join the letter-writing campaign to JP Morgan Chase executives, who on March 31 are expected to decide whether to renew a $2.2 billion loan to the energy company Enbridge.

"We must make God's call to restore creation and advance climate justice an essential part of our identity as people of faith," Antal said.